The theory behind losing an engine and correcting with rudder is about as straight forward as anything we do in aviation, but mishap reports are filled with example and after example of pilots mishandling the event. In the simulator we are expecting to lose engines and most of us handle the exercise with ease. In the airplane we seem to be surprised by the yaw and the roll while ignoring the feeling of flying sideways. One of the many advantages of growing up in large aircraft without simulators as a student, an instructor, and later as an evaluator is I experienced the sideways feeling first hand, many times. I don't like it.

Even if your only experience of flying with an engine out is in a simulator, you need to grow a distaste for flying sideways. When it happens in real life, you need to know how to correct it positively, smoothly, and without fail. I hope I am not being pretentious here, but I think I can do that. But first lets talk aero . . .

2 — Getting the rudder right (on approach or en route)

3 — Getting the rudder right (on takeoff)

4 — Getting the rudder righht (on go around or missed approach) 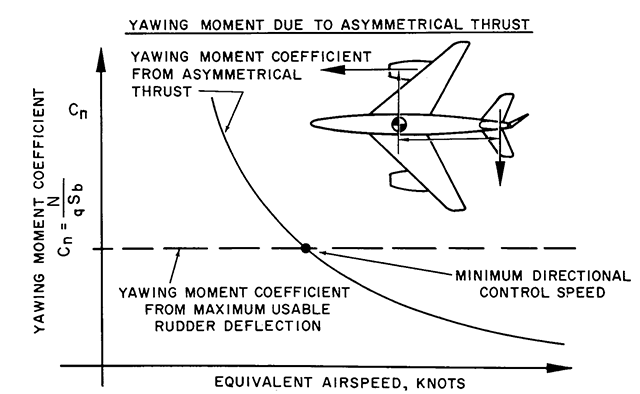 Your rudder was designed to handle this, there is no reason to worry that it won't. As long as you've only lost one engine and you get the correct rudder in smoothly, you should be able to handle any speed the engines will give you with the rudder you have.

Once defined, the minimum directional control speed is not a function of weight, altitude, etc., but is simply the equivalent airspeed (or dynamic pressure) to produce a required yawing moment with the maximum rudder deflection. If the airplane is operated in the critical unbalance of power below the minimum control speed, the airplane will yaw uncontrollably into the inoperative engine. In order to regain directional control below the minimum speed certain alternatives exist: reduce power on the operating engines or sacrifice altitude for airspeed. Neither alternative is satisfactory if the airplane is in a marginal condition of powered flight so due respect must be given to the minimum control sped.

If your aircraft's takeoff data includes a computed minimum control speed, you need to take care to never rotate during takeoff at a speed below it. If there is no such computed speed, it should be part of your V1. More about both of these things:

In each of the critical conditions of required directional control, high directional stability is desirable as it will reduce the displacement of the aircraft from any disturbing influences. Of course, directional control must be sufficient to attain zero sideslip. The critical control requirement for the multiengine airplane is the condition of asymmetrical power since spinning is not common to this type of airplane. The single engine propeller airplane may have either the spin recovery or the slipstream rotation as a critical design condition. The single engine jet airplane may have a variety of critical items but the spin recovery requirement usually predominates.

Our entire emphasis from here is getting the rudder right. We don't want to apply rudder in the wrong direction and we don't want to have rapid rudder reversals. In fact, we need to be careful about moderate rudder reversals with inputs in the other axes. If you are thinking you don't need to worry about any of this as long as you are flying less than VA (maneuvering speed) you are absolutely wrong.

More about this: VA - Maneuvering Speed.

Getting the rudder right (on approach or en route) 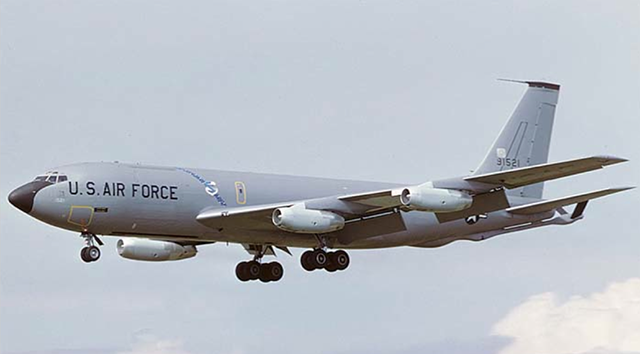 You may be wondering why there is a photo of a KC-135A here; the airplane doesn't exist in this form anymore and besides, what you are flying has got better engines, a yaw damper, and a rudder that automatically corrects Dutch roll. Well, the reason is this airplane has killed a lot of people due to perfectly survivable engine failures. Let's learn from their mistakes.

Issue One: Rate of Recognition

You are probably wondering why "rate of recognition" is more important than direction; it is getting the wrong rudder that will kill you, after all. And that is why the rate of recognition is more important. Rate as in "not too fast." We used to teach engine failures after takeoff by requiring the student keep both feet planted on the floor and forbid the use of rudder until the direction puzzle was solved. We would delay this to the point the aircraft is flown for ten or fifteen seconds with no rudder correction at all. Guess what, the airplane flies just fine at traffic pattern weights.

You suspect that getting the wrong rudder can kill you and in many airplanes it can. So before you even think about pressing either rudder pedal, do this:

You took your time getting here so there's no rush in actually getting the rudder in. Press half of what you think you need and wait. If you need more, add more. But it is important to apply the rudder in one direction and try to minimize rudder reversals.

Getting the rudder right (on takeoff)

Issue One: Recognition and Direction

If the engine failure happens when the airplane is still on the ground you are in good shape, just correct with rudder to keep the airplane going straight down the runway. If the airplane is airborne, your initial reaction should be to level the wings with ailerons and that's a good thing. Simply apply rudder toward the applied aileron. In other words, "step on the low hand."

If your engines are at full power and you lose an asymmetric engine, you can expect you will need full rudder on most aircraft because that's how they determined how much rudder to give you. But you have to time the application of rudder with the thrust decay of the failed engine. If the engine seizes completely, a quick rudder application may be okay. But if the engine is spooling down, you might be better off with a gradual application. If anything, try to use less rudder than needed immediately to avoid having to reverse rudder application.

On go around or missed approach

Issue One: Recognition and Direction

Getting the rate right during a go around is the hardest thing to do on aircraft with an abundance of power. The problem is that the engine may have a significant spool up time and a common novice mistake is to apply all the rudder instantly — you are going to end up needing all of it after all — and then watch helplessly as the nose oscillates left and right as the engines finally catch up. Here again you are better off adding half the rudder gradually, and then the rest of it as you need it.