The emergency locator transmitter is one of those things you hardly notice, almost never interact with, and may never use. In fact, unless you are responsible for certification or maintenance of your airplane, you may not think about it at all.

But you really should know a few basic facts because there may come a time when your life depends on that knowledge.

Reader Dave Montgomery points out that we shouldn't forget to activate the ELT if we are in a remote or oceanic area heading down. Don't wait for the automatic system to do it on its own, the sooner the satellites ping you during your descent, the less time you will be spending in the raft. More about this: Ditching. 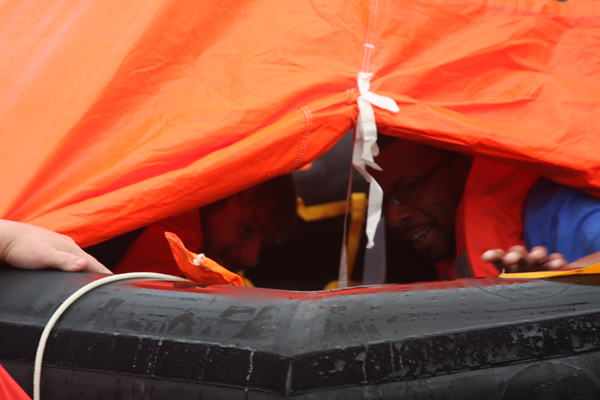 ELTs of various types were developed as a means of locating downed aircraft. These electronic, battery operated transmitters operate on one of three frequencies. These operating frequencies are 121.5 MHz, 243.0 MHz, and the newer 406 MHz. ELTs operating on 121.5 MHz and 243.0 MHz are analog devices. The newer 406 MHz ELT is a digital transmitter that can be encoded with the owner's contact information or aircraft data. The latest 406 MHz ELT models can also be encoded with the aircraft's position data which can help SAR forces locate the aircraft much more quickly after a crash. The 406 MHz ELTs also transmits a stronger signal when activated than the older 121.5 MHz ELTs.

The most important thing to understand about your modern 406 MHz ELT is that is works anywhere in the world. In the old days you were depending on someone nearby to happen to have the emergency radio frequency operating and to have the wherewithal to narrow the location and then report that to the necessary authorities. The new ELT will be picked up very quickly by a satellite and includes location data.

(a) Except as provided in paragraphs (e) and (f) of this section, no person may operate a U.S.-registered civil airplane unless—

(i) Those operations governed by the supplemental air carrier and commercial operator rules of parts 121 and 125;

(ii) Charter flights governed by the domestic and flag air carrier rules of part 121 of this chapter; and

(iii) Operations governed by part 135 of this chapter; or

(2) For operations other than those specified in paragraph (a)(1) of this section, there must be attached to the airplane an approved personal type or an approved automatic type emergency locator transmitter that is in operable condition, except that after June 21, 1995, an emergency locator transmitter that meets the requirements of TSO-C91 may not be used for new installations.

(c) Batteries used in the emergency locator transmitters required by paragraphs (a) and (b) of this section must be replaced (or recharged, if the batteries are rechargeable)—

(1) When the transmitter has been in use for more than 1 cumulative hour; or

The new expiration date for replacing (or recharging) the battery must be legibly marked on the outside of the transmitter and entered in the aircraft maintenance record. Paragraph (c)(2) of this section does not apply to batteries (such as water-activated batteries) that are essentially unaffected during probable storage intervals.

(3) Operation of the controls and crash sensor; and

(4) The presence of a sufficient signal radiated from its antenna.

(e) Notwithstanding paragraph (a) of this section, a person may—

(1) Ferry a newly acquired airplane from the place where possession of it was taken to a place where the emergency locator transmitter is to be installed; and

(2) Ferry an airplane with an inoperative emergency locator transmitter from a place where repairs or replacements cannot be made to a place where they can be made.

No person other than required crewmembers may be carried aboard an airplane being ferried under paragraph (e) of this section.

(f) Paragraph (a) of this section does not apply to—

(2) Aircraft while engaged in scheduled flights by scheduled air carriers;

(3) Aircraft while engaged in training operations conducted entirely within a 50-nautical mile radius of the airport from which such local flight operations began;

(4) Aircraft while engaged in flight operations incident to design and testing;

(5) New aircraft while engaged in flight operations incident to their manufacture, preparation, and delivery;

(6) Aircraft while engaged in flight operations incident to the aerial application of chemicals and other substances for agricultural purposes;

(7) Aircraft certificated by the Administrator for research and development purposes;

(9) Aircraft equipped to carry not more than one person.

(10) An aircraft during any period for which the transmitter has been temporarily removed for inspection, repair, modification, or replacement, subject to the following:

(i) No person may operate the aircraft unless the aircraft records contain an entry which includes the date of initial removal, the make, model, serial number, and reason for removing the transmitter, and a placard located in view of the pilot to show "ELT not installed."

(ii) No person may operate the aircraft more than 90 days after the ELT is initially removed from the aircraft; and

(11) On and after January 1, 2004, aircraft with a maximum payload capacity of more than 18,000 pounds when used in air transportation.

(b) In the event that a properly registered 406 MHz ELT activates, the Cospas−Sarsat satellite system can decode the owner's information and provide that data to the appropriate search and rescue (SAR) center. In the United States, NOAA provides the alert data to the appropriate U.S. Air Force Rescue Coordination Center (RCC) or U.S. Coast Guard Rescue Coordination Center. That RCC can then telephone or contact the owner to verify the status of the aircraft. If the aircraft is safely secured in a hangar, a costly ground or airborne search is avoided. In the case of an inadvertent 406 MHz ELT activation, the owner can deactivate the 406 MHz ELT. If the 406 MHz ELT equipped aircraft is being flown, the RCC can quickly activate a search. 406 MHz ELTs permit the Cospas−Sarsat satellite system to narrow the search area to a more confined area compared to that of a 121.5 MHz or 243.0 MHz ELT. 406 MHz ELTs also include a low−power 121.5 MHz homing transmitter to aid searchers in finding the aircraft in the terminal search phase.

(d) If "armed" and when subject to crash−generated forces, ELTs are designed to automatically activate and continuously emit their respective signals, analog or digital. The transmitters will operate continuously for at least 48 hours over a wide temperature range. A properly installed, maintained, and functioning ELT can expedite search and rescue operations and save lives if it survives the crash and is activated.

(f) Because of the large number of 121.5 MHz ELT false alerts and the lack of a quick means of verifying the actual status of an activated 121.5 MHz or 243.0 MHz analog ELT through an owner registration database, U.S. SAR forces do not respond as quickly to initial 121.5/243.0 MHz ELT alerts as the SAR forces do to 406 MHz ELT alerts. Compared to the almost instantaneous detection of a 406 MHz ELT, SAR forces' normal practice is to wait for either a confirmation of a 121.5/243.0 MHz alert by additional satellite passes or through confirmation of an overdue aircraft or similar notification. In some cases, this confirmation process can take hours. SAR forces can initiate a response to 406 MHz alerts in minutes compared to the potential delay of hours for a 121.5/243.0 MHz ELT.

The Cospas−Sarsat system has announced the termination of satellite monitoring and reception of the 121.5 MHz and 243.0 MHz frequencies in 2009. The Cospas−Sarsat system will continue to monitor the 406 MHz frequency. What this means for pilots is that after the termination date, those aircraft with only 121.5 MHz or 243.0 MHz ELT's onboard will have to depend upon either a nearby Air Traffic Control facility receiving the alert signal or an overflying aircraft monitoring 121.5 MHz or 243.0 MHz detecting the alert. To ensure adequate monitoring of these frequencies and timely alerts after 2009, all airborne pilots should periodically monitor these frequencies to try and detect an activated 121.5/243.0 MHz ELT.

1. ELTs should be tested in accordance with the manufacturer's instructions, preferably in a shielded or screened room or specially designed test container to prevent the broadcast of signals which could trigger a false alert.

2. When this cannot be done, aircraft operational testing is authorized as follows:

(a) Analog 121.5 / 243 MHz ELTs should only be tested during the first 5 minutes after any hour. If operational tests must be made outside of this period, they should be coordinated with the nearest FAA Control Tower or FSS. Tests should be no longer than three audible sweeps. If the antenna is removable, a dummy load should be substituted during test procedures.

(b) Digital 406 MHz ELTs should only be tested in accordance with the unit's manufacturer's instructions.

(c) Airborne tests are not authorized.

Pilots are encouraged to monitor 121.5 MHz and/or 243.0 MHz while inflight to assist in identifying possible emergency ELT transmissions. On receiving a signal, report the following information to the nearest air traffic facility:

(a) Your position at the time the signal was first heard.

(b) Your position at the time the signal was last heard. 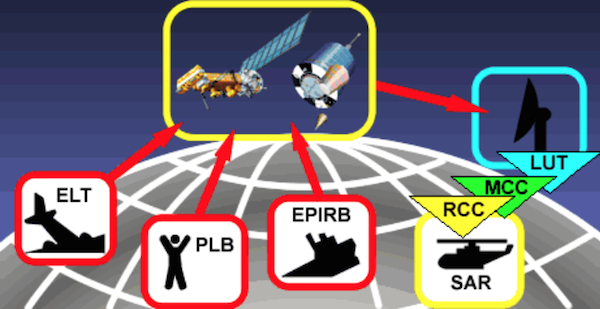 The basic Cospas-Sarsat concept is illustrated in the adjacent figure. The System is composed of:

LEOSAR System. The Cospas-Sarsat LEOSAR system uses polar-orbiting satellites and, therefore, operates with basic constraints which result from non-continuous coverage provided by LEOSAR satellites. The use of low-altitude orbiting satellites provides for a strong Doppler effect in the up-link signal thereby enabling the use of Doppler positioning techniques. The LEOSAR system operates in two coverage modes, namely local and global coverage.