Just because you are on an IFR flight plan doesn't mean you have the sky to yourself, as this mishap clearly illustrates. The Aeroméxico aircraft was technically in the right but all aboard perished after a light aircraft encroached on their airspace. The "See and Avoid" concept was found causal, as well as the light aircraft. But sometimes your last line of defense — your eyes — is the only defense you have left.

A lot has happened over the last 20+ years with the mandatory inclusion of TCAS on most aircraft. The problem remains, however, because still not everyone has TCAS. On a VMC day when low to the ground, one pilot's eyes have to be outside. When there is a mix of traffic and not everyone is playing by the IFR rules, you need to have your head on a swivel, your eyes outside the cockpit. Every pilot should know the Big Sky Theory doesn't work.

On August 31; 1986; about 1152 Pacific daylight time; Aeronaves de Mexico, §.A., flight 498, a DC-9-32, Mexican Registration XA-JED, and a Piper PA-28-181, United States registration N4891F, collided over Cerritos, California. Flight 498, a regularly scheduled passenger flight, was on an Instrument Flight Rules flight plan from Tijuana, Mexico, to Los Angeles International Airport, California, and was under radar control by the Los Angeles terminal radar control facility. The Piper airplane was proceeding from Torrance, California toward Big Bear, California, under Visual Flight Rules, and was not in radio contact with any air traffic control facility when the accident occurred.

The controller was busy admonishing a third airplane for blundering into another region of the airspace and missed the radar "skin paint" return of the Piper.

The National Transportation Safety Board determines that the probable cause of the accident was the limitations of the air traffic control system to provide collision protection, through both air traffic control procedures and automated redundancy. Factors contributing to the accident were (1) the inadvertent and unauthorized entry of PA-28 into the Los Angeles Terminal Control Area and (2) the limitations of the "'see and avoid" concept to ensure traffic separation under the conditions of the conflict. 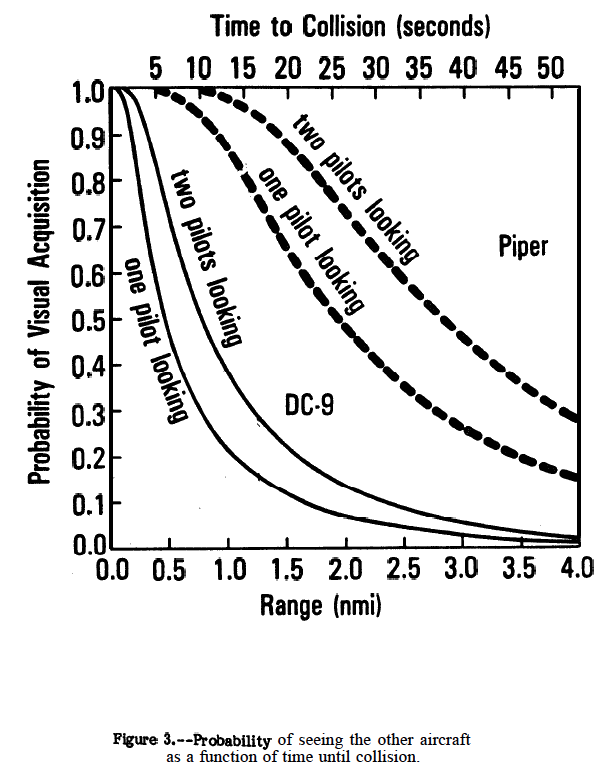 Probability of seeing the other aircraft,
NTSB AAR 87/07, Figure 3)

Back in 1986 many of us gave too much credit to our IFR flight plans to provide protection from itinerant aircraft blundering into our flight paths. Now with TCAS, many of us rely on the electronic negotiation between aircraft for the same "warm and fuzzy." But TCAS relies on the other aircraft being so equipped and its pilots reacting correctly to its warnings. Your last line of defense remains your eyes. This accident spurred a study on pilot scanning techniques and reaction times. If you are in a traffic pattern environment, IFR or VFR, your eyes need to be outside. The study shows this practice can make a critical difference.

More about this: The Big Sky Theory.