The safety investigation board goes through 21 pages of aircraft systems, company procedures, and geography which basically point to the fact the captain ignored all of it when designing his own FMS circling approach and flying his aircraft into the side of a mountain. So was this a classic CFIT? Or perhaps a problem with circling approach procedure?

No, the crux of the problem is revealed in chapter 8:

While the first officer complied with the captain's instructions to build the illegal approach and dialed in the requested altitudes, he did weakly warn the captain after several (21) EGPWS alerts, "Sir pull up, sir."

The report relates what really happened but their "primary cause" was listed as violation of established procedures for a visual approach and failure to heed EGPWS warnings. All that is true, but in my view, the lessons to be learned from this are: 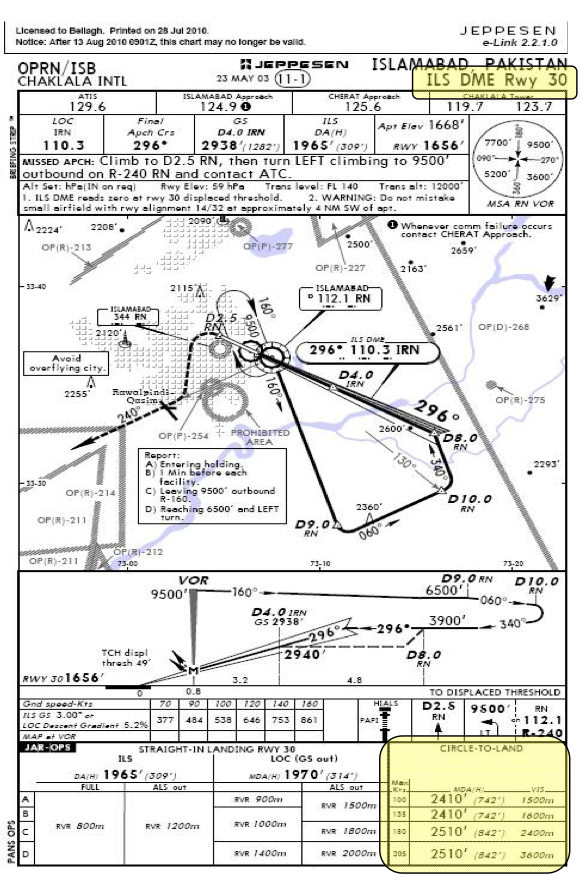 ABQ-202, mishap aircraft A-321, AP-BJB, on 28 July 2010, operated by Airblue was scheduled to fly a domestic flight sector Karachi - Islamabad. The aircraft had 152 persons on board, including six crew members. The Captain of aircraft was Captain Pervez Iqbal Chaudhary. Mishap aircraft took-off from Karachi at 0241 UTC (0741 PST) for Islamabad. At time 0441:08, while executing a circling approach for RWY-12 at Islamabad, it flew into Margalla Hills, and crashed at a distance of 9.6 NM, on a radial 334 from Islamabad VOR. The aircraft was completely destroyed and all souls on board the aircraft, sustained fatal injuries. May Allah bless their souls.

It is unclear why the captain wanted to fly a right downwind pattern. The terrain to the west is higher, there is a prohibited area just two miles west, and there is a city with an "avoid" note.

While this may seem quite wide compared to the TERPS criteria used on most U.S. circling approaches, it is within ICAO radii and updated TERPS rules.

More about this: Circling Approach Area.

Pilots of automated cockpits should get in the habit of always ensuring the aircraft reacts as expected whenever making a change to the flight management system, flight director, and autothrottles. Never make an input and move on without doing this first. 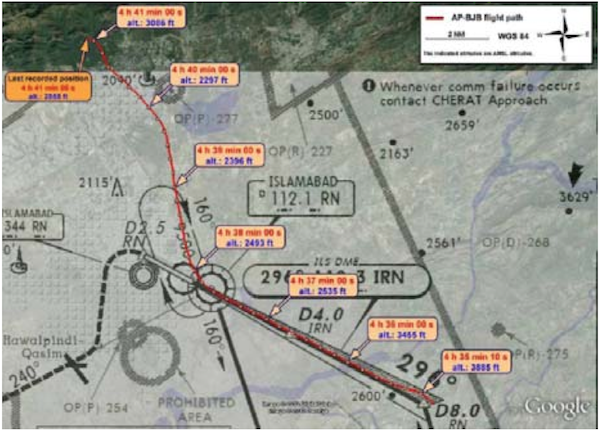 Air blue crash has been finalized as a case of Controlled Flight into Terrain (CFIT), in which aircrew failed to display superior judgment and professional skills in a self created unsafe environment. In their pursuit to land in inclement weather, they committed serious violations of procedures and breaches of flying discipline, which put the aircraft in an unsafe condition over dangerous terrain at low altitude.