Here is an example of how the cause of a mishap can be obscured by press coverage, a good pilot's union, and a public's need for a hero now and then. 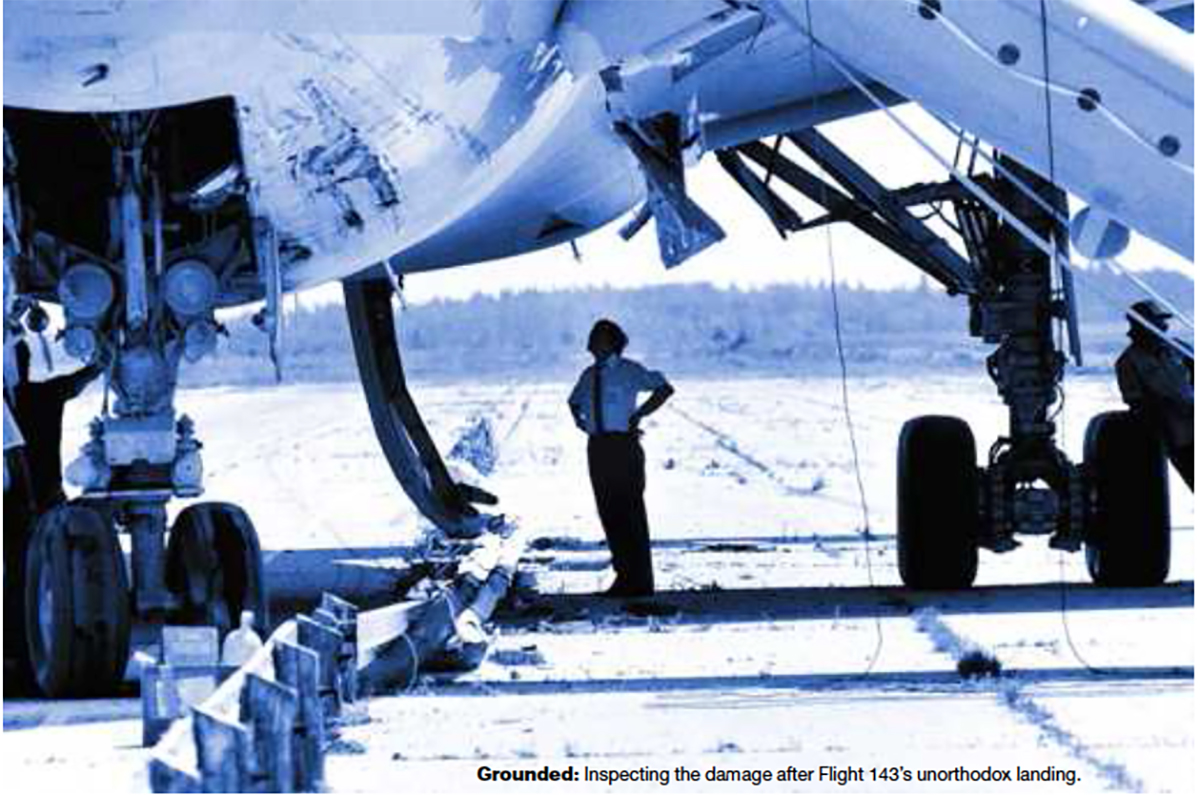 The captain of this airplane did a magnificent job dead sticking a Boeing 767 to a landing on an abandoned air field. The first officer did a great job of computing glide ratios and keeping the captain informed. In fact, the performance of this crew in Crew Resource Management and Situational Awareness was superb from the moment they suspected they were out of fuel, all the way through the successful emergency landing, passenger evacuation, and aircraft fire fighting. Excellent.

The problem is that both pilots were instrumental to the fact the airplane took off without enough fuel.

During a routine service check, the three fuel quantity indicators, or fuel gauges, situated on an overhead panel between the two pilots, were found to be blank. One gauge is for the centre auxiliary tank, one for the left main tank and one for the right main tank. . . . These gauges are operated by a digital fuel gauge processor which has two channels. Either one of the channels is normally sufficient to ensure satisfactory operation of the processor to provide fuel indication of the gauges in the cockpit.

[A technician] found that he could obtain fuel indication by pulling and deactivating the channel 2 circuit breaker. . . . With this kind of problem an aircraft can only be dispatched after compliance with the conditions of the Minimum Equipment List (MEL). . . . [The technician] then dispatched the aircraft after complying with the qualifying conditions of MEL item 28-41-2. Under this item of the MEL, because one of the processor channels was inoperative, the fuel load had to be confirmed by use of the fuel measuring sticks located under the wings of the aircraft.

The aircraft was then flown from Edmonton to Montreal via Ottawa. All three fuel gauges operated normally. The pilot of that trip briefed the new pilot about the MEL item, but the new pilot was under the impression the gauges were not working and the aircraft was flown that way. Meanwhile a technician in Montreal reset the circuit breaker to further trouble shoot and determined a new processor was needed. He tried to order one but was told none were available. He forgot to repull the circuit breaker. When the new captain showed up, the breaker was not pulled and his three fuel gauges, therefore, were blank.

{The new captain] knew that the aircraft was not legal to go with blank fuel gauges. He testified that he had raised the question of legality with one of the attending technicians who assured him the aircraft was legal to go and that a higher authority, Maintenance Central, now renamed Maintenance Control, had authorized the operation of the aircraft in that condition. No such authorization had been given. There is even some question as to whether this conversation took place.

Even if the conversation had taken place, pilots must understand their responsibility for the safety of the flight outweighs any "higher authority."

[It] should be noted that for some years now all aircraft in Canada have been fueled in litres. That is to say that fuellers deliver fuel and charge for the fuel by the litre. On the other hand, those who calculate the load of the aircraft and those who fly the aircraft do not work in litres, which is a measure of volume, but rather a weight measurement.

Prior to the introduction of the Boeing 767 type of aircraft into the Air Canada fleet . . . weight calculations were made in pounds, an Imperial measurement. When the new aircraft were ordered, a decision was taken, in line with Canadian government policy, to order them with their fuel gauges reading in kilograms, a metric measurement. Similarly, calculations of takeoff weight of the new type of aircraft were to be made in kilograms.

The first signs of trouble appeared shortly after 8:00 p.m. Central Daylight Time when instruments in the cockpit warned of low fuel pressure in the left fuel pump. The Captain at once decided to divert the flight to Winnipeg, then 120 miles away, and commenced a descent from 41,000 feet. Within seconds, warning lights appeared indicating loss of pressure in the right main fuel tank. Within minutes, the left engine failed, followed by failure of the right engine. The aircraft was then at 35,000 feet, 65 miles from Winnipeg and 45 miles from Gimli.

Fortunately for all concerned, one of [the captain's] skills is gliding. He proved his skill as a glider pilot by using gliding techniques to fly the large aircraft to a safe landing.

Source: [Final Report of the Board of Inquiry into Air Canada Boeing 767 C-GAUN Accident, Part III]

The lessons here are obvious:

An interesting side note. I like watching the U.K. television series May Day for recreations of these mishaps. The captain and first officer granted the series interviews and were treated very kindly, with only a one sentence note that they "were partly blamed for their roles in the incident." In fact, the captain was demoted for six months and the first officer was suspended for two weeks. The Canadian Transportation Safety Board cited Air Canada for failing to train the pilots to make the proper fuel calculations while praising the crew for overcoming the problems caused by "corporate and equipment deficiencies. Two years later both were awarded the first ever Fédération Aéronautique Internationale Diploma for Outstanding Airmanship.

Outstanding airmanship? I would give them an award for outstanding stick and rudder skills but then I would take away their licenses for very poor airmanship. The primary ingredient in airmanship, after all, is judgement.

Final Report of the Board of Inquiry into Air Canada Boeing 767 C-GAUN Accident - Gimli, Manitoba, July 23, 1983, Government of Canada