This is a heartbreaking accident that placed a novice first officer into an airline that failed to enforce standard operating procedures, teach crew resource management, and provide enough pilot oversight of a captain who appeared to be incompetent. Add to all that a POI who appeared to be blind to all the problems. I first wrote about this right after the NTSB released its preliminary report, saying there is much to be learned here. Now that the final report is out, those lessons remain. The key takeaway for us pilots, however, bears repeating. If you don't have the skills to operate the aircraft as needed for the job, you should be morally obligated to take yourself off the flying roster until you are properly trained. In my opinion, this captain killed his first officer because he failed to do that.

The captain had a history of poorly flying instrument approaches, ending up too high to land, and botching missed approaches. The captain preferred visual approaches and requested a circling approach when the ceiling was below that approach's minimum descent altitude; but the ceiling was above the MDA for an available straight-in approach. The airline paired their captains and first officers with very little chance for interchange, so a first officer unwilling to confront a captain created a captain with little oversight. Finally, the captain was prone to sleeping during flight and the first officer to texting while the captain slept. Those texts provide the greatest insight into what happened here. 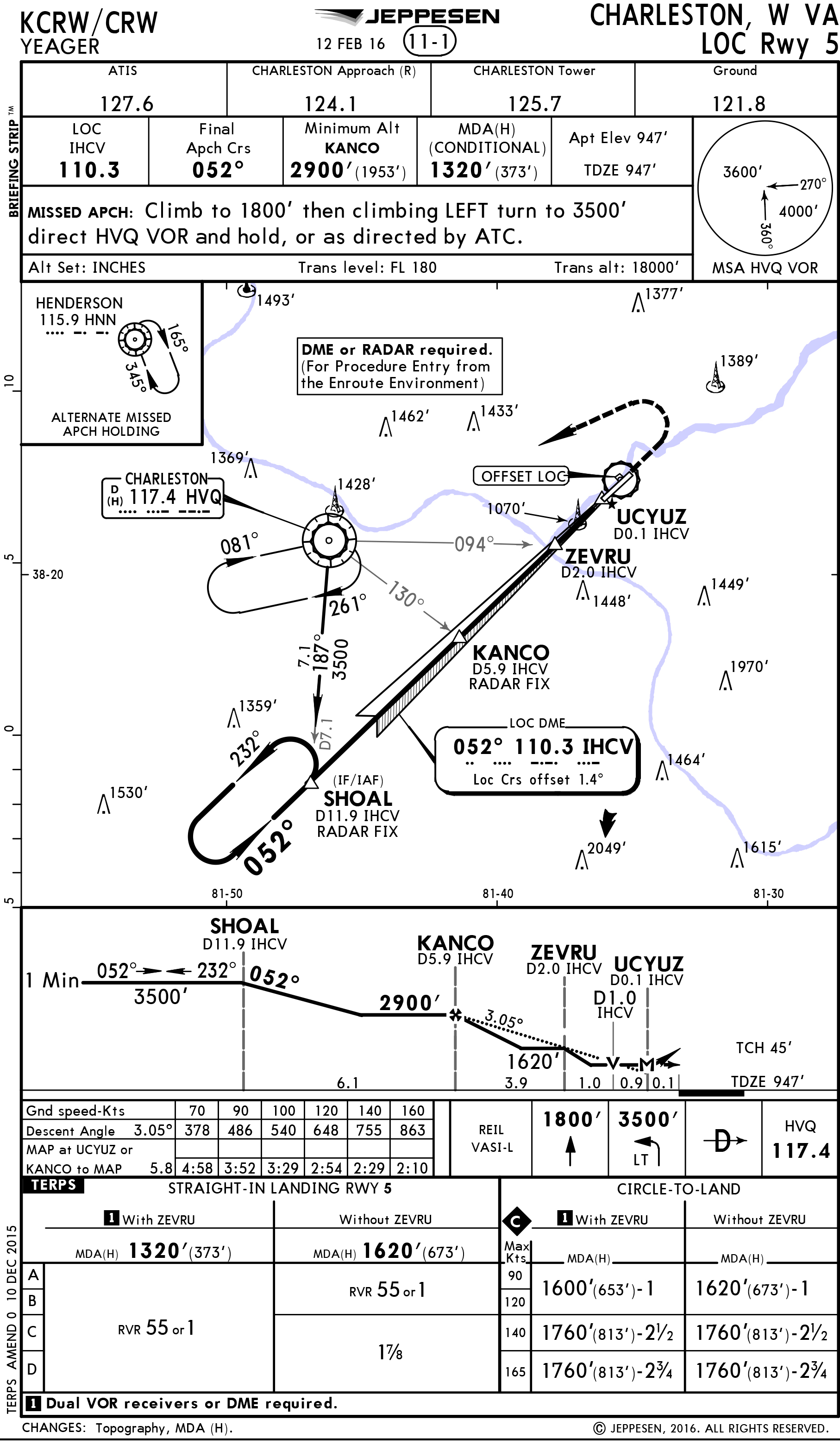 There is a fair amount of video footage available. Here are the last few seconds: Air Cargo Carriers Crash at Yeager Airport.

There was an overcast ceiling at 500 feet at the time of the crash, 200 feet below the MDA for the VOR-A, but just above the straight-in MDA for the LOC Rwy 5. The captain appeared to be a poor instrument pilot with a history of ducking under. The airline's captains were known to deviate from standard operating procedures. While the airline had a crew resource management program in the sense that they had a PowerPoint presentation, it appears the captain never took the course and the first officer was unable to confront her captain.

The airline had several small bases crewed by just two pilots, who tended to fly exclusively with each other.

(Below the circling MDA.)

This may seem counterintuitive to most competent instrument pilots. A localizer straight-in approach is easier to fly than a circling approach at minimums, after all. But this captain had a history of being unable to maintain an altitude and heading in instrument conditions. A VOR radial outbound is easier to track than a localizer inbound because the radial splay outward and the tolerances for keeping a needle centered becomes easier, opposite the effect on a localizer inbound.

The captain had a history of busting check rides but withheld that information from the airline. He was known to be less than capable as an instrument pilot. He frequently slept during flight and had the first officer essentially fly solo.

The first officer appeared to be competent and conscientious but found herself in a dysfunctional environment that led her to accepting deviance from standard operating procedures as the normal operating mode. She accepted that she had to tolerate flying solo as the captain slept. She accepted his poor instrument skills. But she also used her cell phone to text while in flight as the captain slept. Her texts might be the best source of information for accident investigators.

Have you ever failed any check rides, proficiency checks, IOE or line checks?

The Captain answered “no.”

When asked whether ACC had a policy on PED usage in the cockpit, and if so, how that policy was communicated to the pilots, the company stated that they train FAR 135.144 on portable electronic devices and the only approved item for use was the iPad EFB. Upon review of ACC training manual, training documents, and FOM, no references to 135.144 nor personal electronic devices were found.

Crew assignment/pairings were base specific. In the case of CRW, two pilots; one Captain and one First Officer were assigned to each base. Pilots did not rotate in/out and were permanently paired with each other. There was no formal rotation schedule; they were essentially “partners.” Pilots could make a bid for other bases or they could be reassigned based on need. If a pilot called in absent, the chief pilot or designee would fill in for the absent crew member. When asked about the pros and cons of permanent crew pairings, the chief pilot stated, “a con was that people could pick up bad habits.” When the FAA POI was asked about ACC’s outstation model, he stated he was not aware of pilot experience levels or crew pairing issues; they didn’t get into that. He stated that he only looked at whether pilots were conducting a safe operation…” As a positive aspect of the permanent crew pairings, he stated he “considered two pilots flying exclusively together to be beneficial as there was value in familiarity with the other person.”

The National Transportation Safety Board determines the probable cause(s) of this accident to be: the flight crew's improper decision to conduct a circling approach contrary to the operator's standard operating procedures (SOP) and the captain's excessive descent rate and maneuvering during the approach, which led to inadvertent, uncontrolled contact with the ground. Contributing to the accident was the operator's lack of a formal safety and oversight program to assess hazards and compliance with SOPs and to monitor pilots with previous performance issues.

The probable cause shows what happened but not why it happened. I would like to offer some lessons to consider: