"Above V1 we are going." Period, end of discussion. You might want to add a caveat to that statement: "Unless the airplane will not fly." 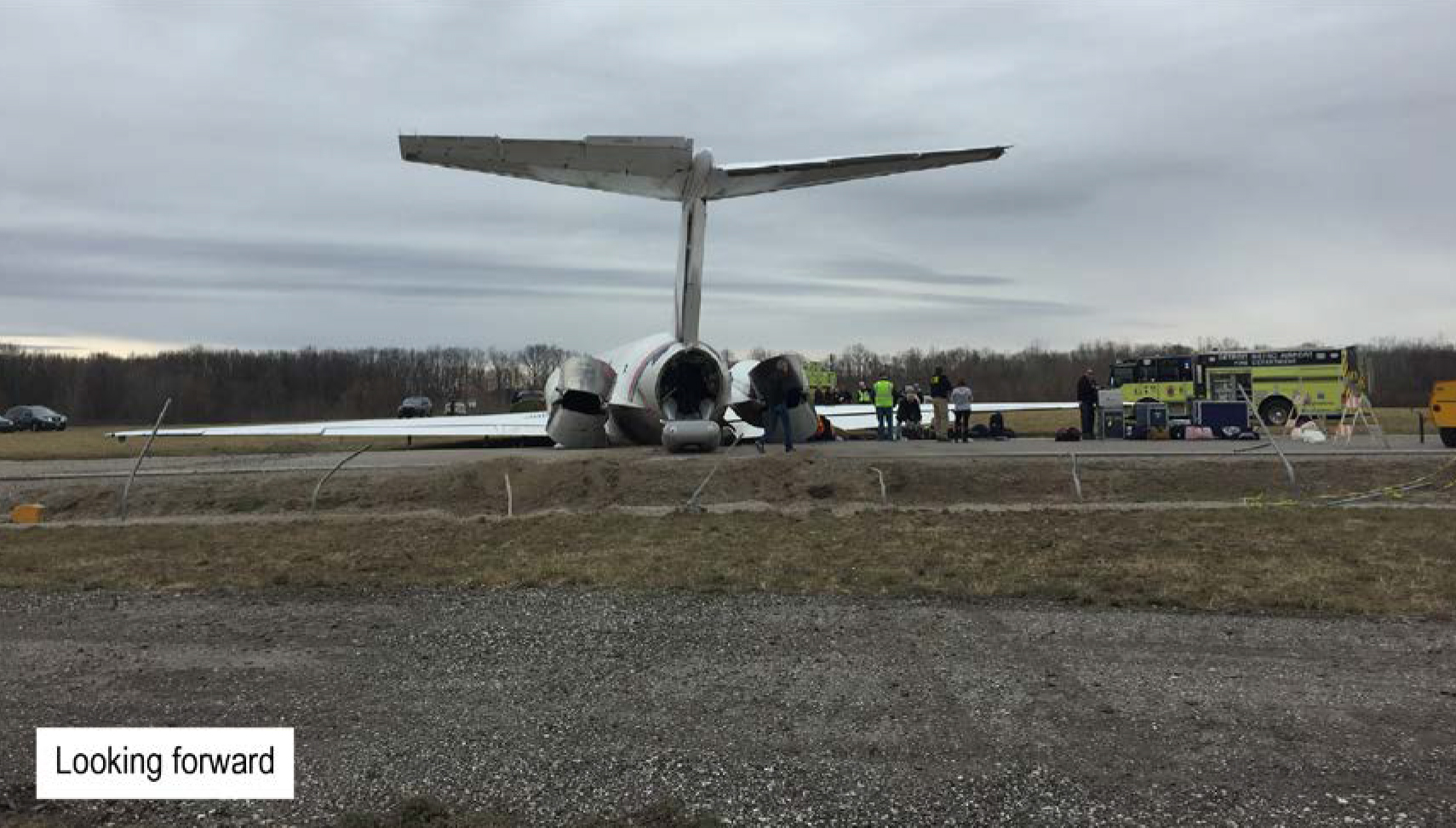 As pilots we hope (and endeavor) to never find ourselves the subject of an aircraft accident investigation, but if we are, we hope that all our actions in hindsight were the right actions. This is just such an example.

The accident was caused by a flaw in the aircraft's design that had not been foreseen. The captain was the pilot flying and the first officer was a check airman. I don't know if this impacted the situation but both appeared to be operating by the book, according to the company's Standard Operating Procedures (SOPs). Perhaps we can take a lesson from this. If both pilots are operating as if the other pilot is keeping a close eye on them or in a manner to demonstrate to the other pilot only the best example, we will have set ourselves up for success in even the most trying of circumstances.

Everything before, during, and after this accident was by the book, as far as the pilots were concerned. There may have been issues with the evacuation that were overcome, but our focus here is on pilot procedures. 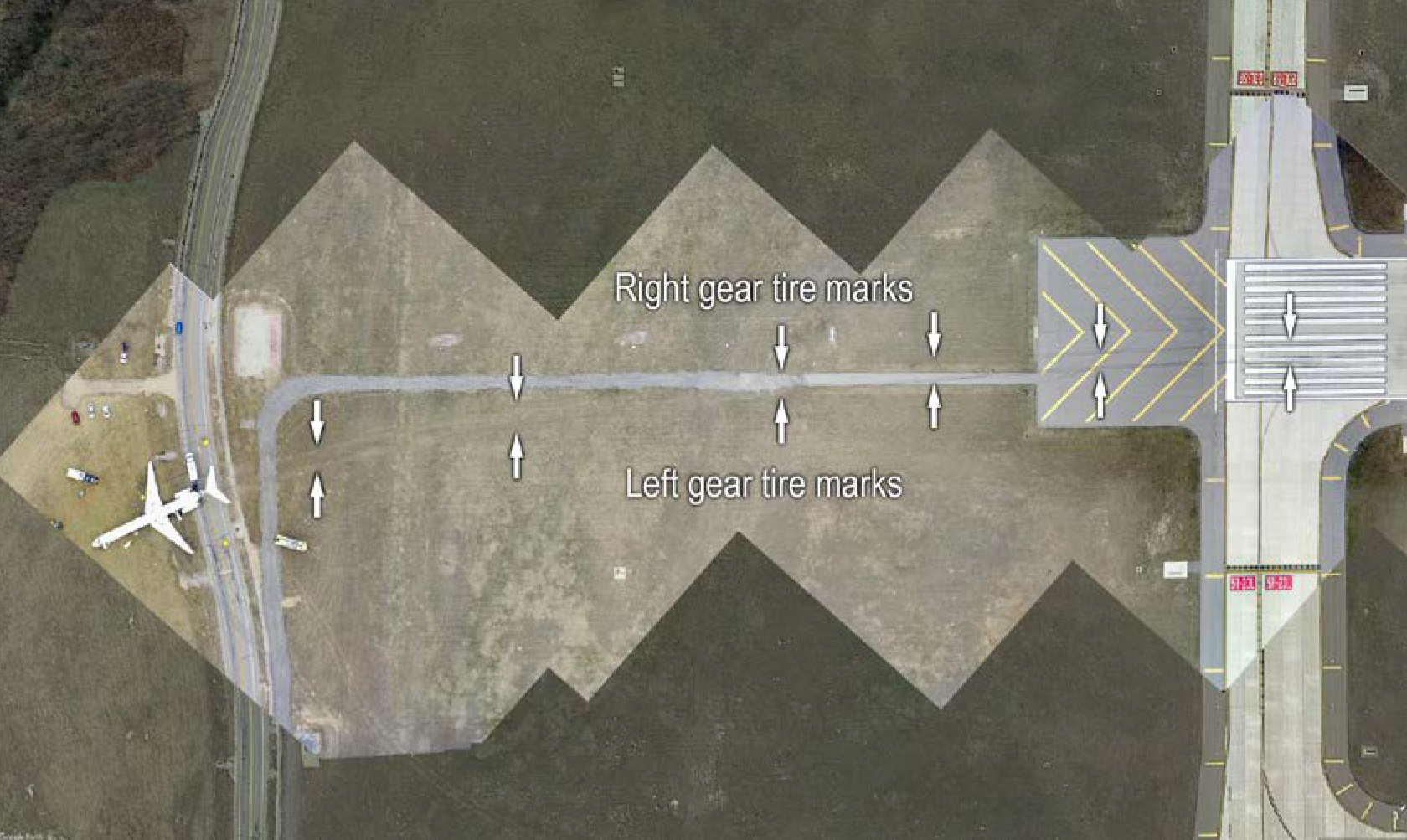 Orthomosaic image of the airplane's path from the end of runway 23L to its final location, NTSB AAR 19/01, figure 1.

really keep an eye out on what our airspeed is doing today, ahm, in the event of an engine fire or failure at or after V1, we’re going to continue the takeoff . . . . [I]f you get any kind of a [windshear] warning, it’s gonna be max thrust, ah, all the way to the firewall thrust, if necessary . . . we’ll fly out of the shear, back me up on the, ah, airspeed calls.

I've flown aircraft with similar flight controls and it can be confusing for someone who grew up on simple control systems where a cable from the stick or yoke goes directly to the control surface, and then progressed to a hydraulic or fly-by-wire system. In a nutshell, the yoke is controlled to a smaller surface on the elevator, rudder, or aileron. The yoke moves the smaller control surface opposite the intended direction to provide an aerodynamic force to the large control surface. It was an ingenious way to control large aircraft in the days before hydraulic boost or fully hydraulic flight controls. 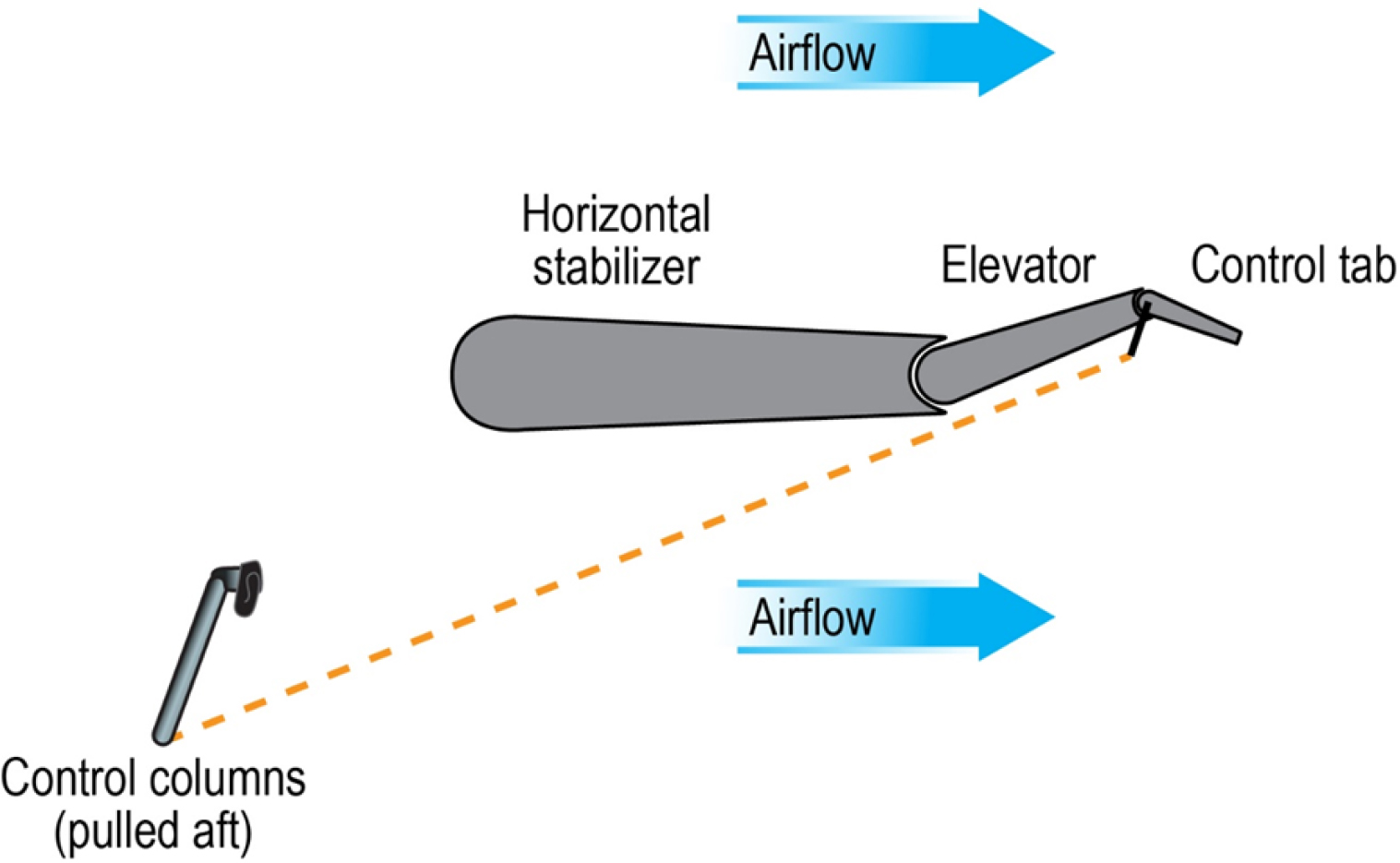 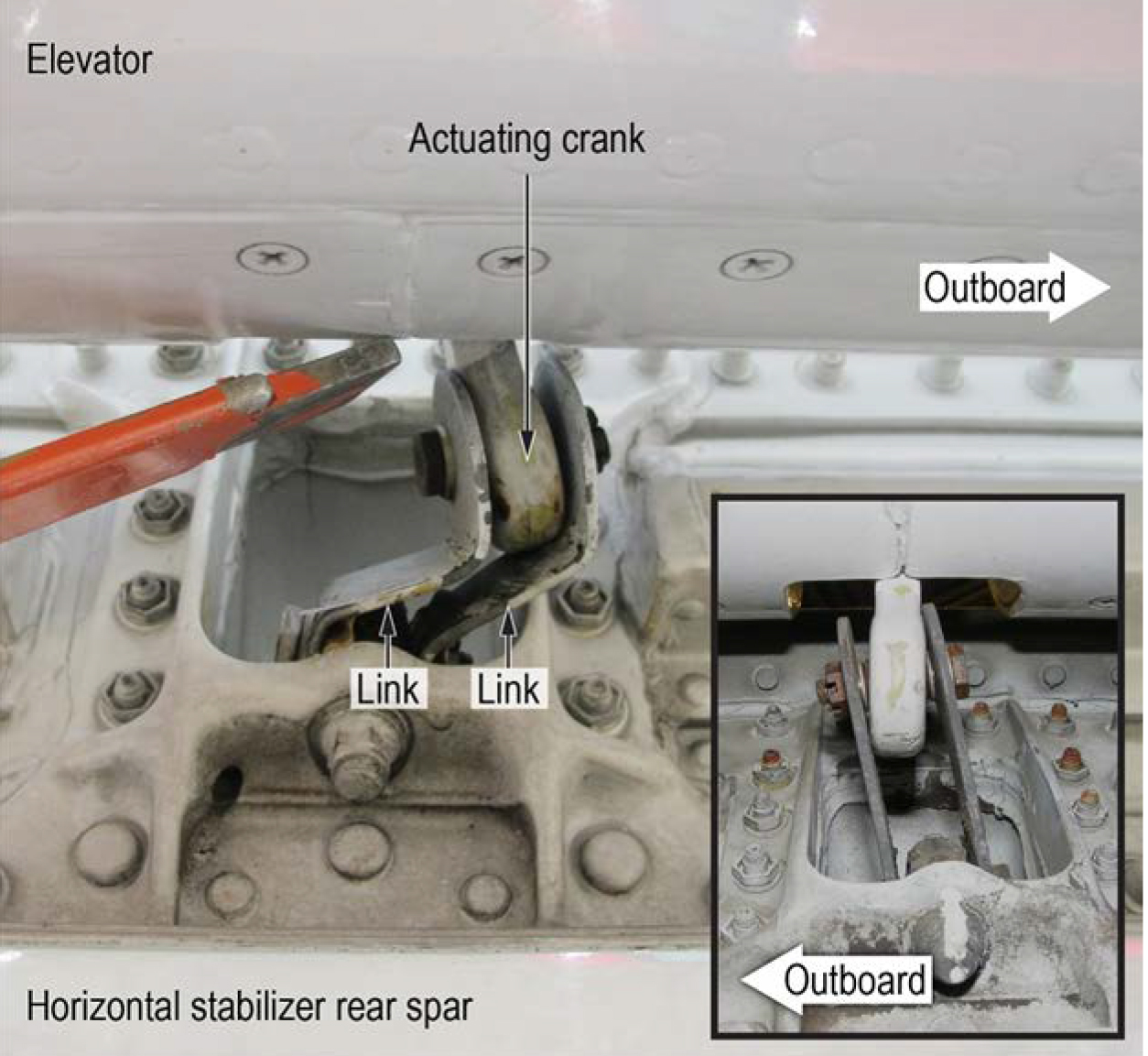 Note: the orange bar is not a part of the airplane and was used as a pointer.

On the morning of the accident, the METAR issued at 1153 was the last report for which complete ASOS data with LAWRS observer augmentation were available. It contained the following information:

The NTSB and Boeing conducted a fascinating study of the local wind effects from a nearby hangar showed that a 55 knot gust over the hangar could have produce a horizontal gust of over 58 knots over the airplane. This is still below the design limit of the elevator.

Based on the results of the testing conducted, gust loads between 55 and 60 kts could result in an overcenter condition of the geared tab linkage if the elevator traveled from a full-TEU position to the TED stop. Thus, the NTSB concludes that, although the reported wind at the airport did not exceed the horizontal ground gust limits specified for transport-category airplanes, the effects of the large hangar near the accident airplane’s parked location resulted in a turbulent windflow with vertical components that imposed dynamic loads on the elevator system sufficient to jam the right elevator.

Airplanes that are exposed to high-sustained winds, or wind gusts, greater than 75 [mph] (approximately 65 [kts]) are susceptible to elevator damage and/or jamming. In accordance with the . . . [AMM], airplanes suspected to have been exposed to these conditions must have visual and physical inspections (moving surfaces by hand) of all flight controls and operational check of these [systems].

If wind gusts are expected to exceed 69 [mph] (60 [kts]), aircraft should be headed into wind to prevent structural damage to primary control surfaces.

CAUTION: If there is any possibility that [the] aircraft has been subjected to winds in excess of 75 [mph] (65 [kts]), and aircraft has not been headed into wind or wind direction changed during parking, perform visual and physical inspections (moving the surfaces by hand) of all flight controls and an operational check of these systems.

Ameristar’s AMM for the Boeing MD-83 included a warning that the airplane must be parked headed into the wind if gusts were expected to exceed 60 kts and a caution that a visual and physical inspection of all flight control surfaces was required if the airplane was subjected to wind exceeding 65 kts. However, none of the recorded or forecasted wind at YIP exceeded these limits during the time that the airplane was parked on the ramp (the highest reported wind gust was 55 kts and the highest forecasted gust was 48 kts). Thus, the NTSB concludes that, based on the available wind data for YIP, the flight crew was not required to perform high-wind parking procedures or request flight control inspections from maintenance personnel.

The control tabs are the only parts of the elevator system that are connected to the control column, and the control tabs were not damaged. Thus, the NTSB concludes that the flight crew’s preflight inspection and control check during taxi, which were performed in accordance with the procedures specified in the AOM, could not have detected the overcenter position of the right elevator geared tab’s linkage or the resultant jammed elevator condition.

The NTSB determines that the probable cause of this accident was the jammed condition of the airplane’s right elevator, which resulted from exposure to localized, dynamic wind while the airplane was parked and rendered the airplane unable to rotate during takeoff. Contributing to the accident were (1) the effect of a large structure on the gusting surface wind at the airplane’s parked location, which led to turbulent gust loads on the right elevator sufficient to jam it, even though the horizontal surface wind speed was below the certification design limit and maintenance inspection criteria for the airplane, and (2) the lack of a means to enable the flight crew to detect a jammed elevator during preflight checks for the Boeing MD-83 airplane. Contributing to the survivability of the accident was the captain’s timely and appropriate decision to reject the takeoff, the check airman’s disciplined adherence to standard operating procedures after the captain called for the rejected takeoff, and the dimensionally compliant runway safety area where the overrun occurred.