This is a classic mishap where aiming for the first inch of pavement leads to bad results. Ever since one of my Air Force Boeing 747 squadron mates put eighteen wheel prints in the overrun at Andrews, the math behind aircraft deck angle has been a priority for me. What the Canada Transportation Safety Board calls "Eye-to-wheel height" really misses the point. What pilots really need to understand is how far behind their aim point the wheels will contact the runway. The geometry of the aircraft on approach fundamentally changes the point at which the wheels will touch in relation to the pilot's aim point. The pilots were experienced in the Challenger 604, which has an abnormally flat deck angle on approach. In that airplane, they were able to successfully aim for 500 feet down the runway and land fairly close to that target. In an airplane with a higher deck angle, such as the incident's BD-700, this is not possible. 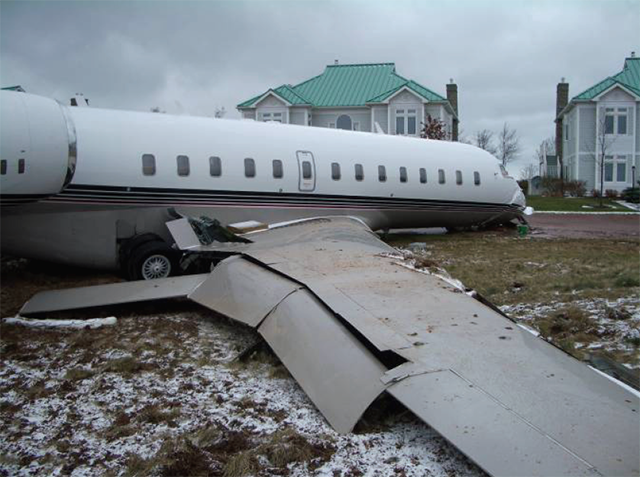 In this model of BD-700 the main gear are 41 feet behind the pilots, but the wheels will touch 285' behind the pilot's aim point if the pilot does not flare. Hard to believe? See Deck Angle for the math.

Approaching the destination, the crew completed the approach and landing briefing. Because a damp runway and a crosswind were expected, they planned a firm touchdown followed by use of reverse thrust. The autobrake system has settings of low, medium or high. For passenger comfort, the autobrake system was selected on the low setting. In order to maximize the available roll-out distance, the touchdown point was planned for the first 500 feet of runway, the same distance this crew had used in the past when flying into CFH4 with other company aircraft. The captain had verified the landing distance performance and had estimated that, for the conditions, 4300 feet of the 4885-foot runway was required.

There are few contradictory ideas here. They computed a landing distance of 4300 feet, which would have included a 50 foot threshold crossing height, yet they planned on crossing the threshold below that height. They planned a firm touchdown, but selected the lowest setting of the autobrakes. 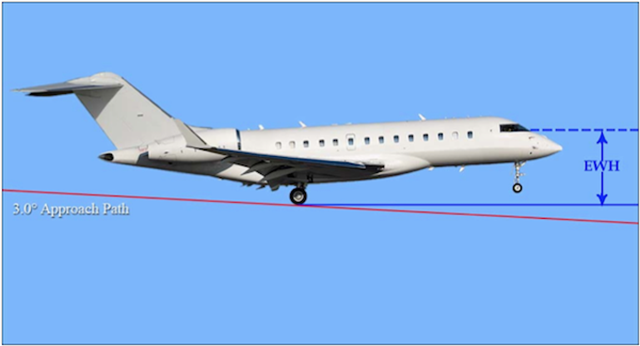 The mishap aircraft was the longest aircraft the captain had ever flown, it is unlikely he would have ever been taught about the distance between his aim point and wheel no-flare distance. His most formative jet experience was in the Challenger 604, which has an unusual landing geometry.

C-GXPR's EWH calculations were completed using the actual conditions, an aerodrome at sea level, a 3.0° flight path and the landing gear fully extended. For the occurrence flight, the EWH was determined to be 16.35 feet. Based on the Global 5000 maximum landing weight of 78,600 pounds, the greatest EWH for the Global 5000 in the approach configuration was determined to be 17.2 feet. 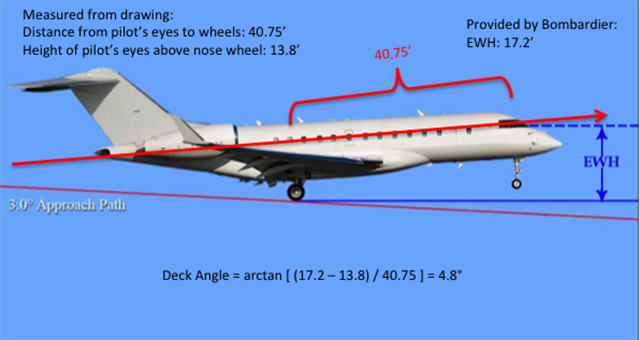 The investigators failed to consider the distance between the pilot's aim point and the theoretical point the wheels would touchdown without a flare, based on that aim point. Because of the aircraft's positive deck angle and the height of the pilot's eyes above the wheels, the distance is not one-for-one. Few manufacturers publish their aircraft deck angles but it can be estimated. In the case of the BD-700, using a photo of the aircraft on approach in the accident report we can determine the BD-700 has an approach deck angle of 5°, which is typical of most passenger jets. (The pilots were most recently qualified on a Challenger 604, which is a notable exception to this average. The 604 has an approach angle which appears to be very close to zero.)

If a BD-700 pilot flies an on-speed 3° glide path toward an aim point on a runway and does not flare, the aircraft's wheels will touch the runway 285 feet behind that aim point. In the case of this mishap, the pilot was on track to do just that, but when the throttles went into the retard mode the aircraft was not over the runway and the pilot's pitch feel would have been different because there was less ground effect. The pilot failed to compensate and the airplane dipped below the glide slope he had set up.

The lesson should be clear: your wheels will touch far behind your aim point unless you flare consistently. You will be hard pressed to do that unless your airplane is over the runway when you flare. Aiming short of a normal 750' to 1,000' aim point removes all margin for error.

More about this: Aim Point versus Touchdown Point. 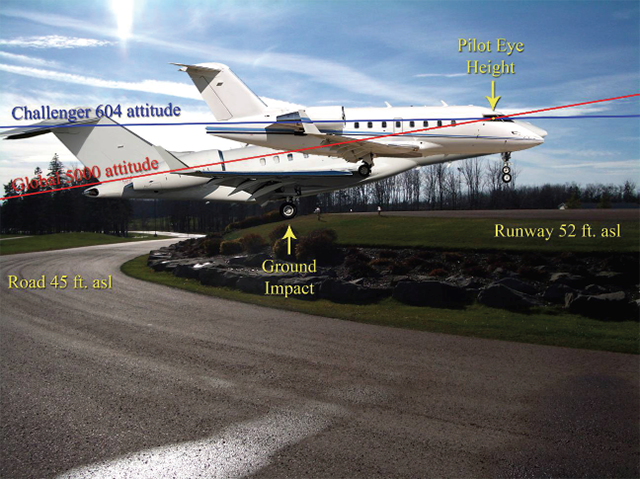