There is a term in the safety business that isn't in a lot of literature because it illustrates a level of futility many of us are reluctant to face, and that term is "assumed safety." We assume a lot as pilots before releasing the brakes prior to takeoff. We assume the airplane was properly designed, maintained, and serviced. We assume those we share the skies with are also properly equipped. But sometimes those assumptions are wrong. Corporate aviation pilots can get into the nuts and bolts better than airline pilots, but we too are relying on a lot of other people to do their jobs properly. Sometimes we are just passengers in airplanes that are ticking time bombs. Case in point: China Airlines CI611. 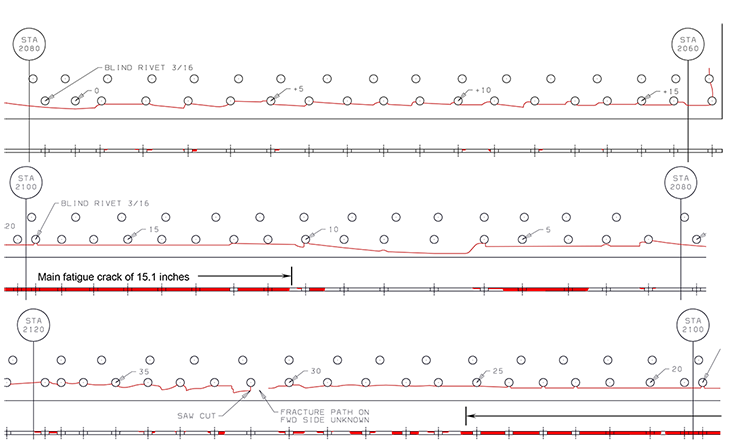 Distribution of the fatigue cracks,
from ASC-AOR, Figure 1.16-12

This airplane had a tail strike that severely weakened part of the skin in the aft lower section. The airline did not repair the damage properly and failed to follow up with the necessary inspections over the years. I've left out much of the inspection history because we get enough of what went wrong through the repair. I've presented enough of the nuts and bolts to help us pilots understand what we should be looking for when inspecting damage repairs. A very thin crack or even a scrape can become a tear large enough to bring down the airplane. These imperfections are especially dangerous when around corners and holes. The repairs are painted over and sometimes there is nothing for you to see, as in this case. But you might see something that gives you a hint.

The Aviation Safety Council did an excellent job piecing this all together but I would have written the probable cause a little differently. I believe the cause was an airline management that encouraged short cuts to manufacturer repair procedures, mechanics who were either unaware they were not using correct repair techniques or agreed to these techniques despite their knowledge, and improper oversight from the Chinese authorities. This sort of maintenance malpractice is often deadly and in this case it was. 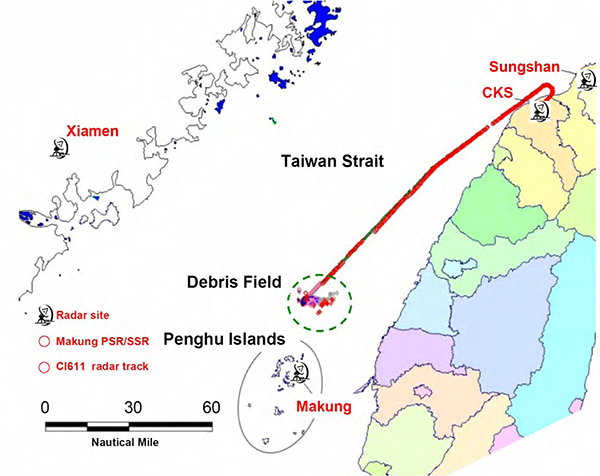 The takeoff and initial climb were normal. The flight contacted Taipei Approach at 1508:53, and at 1510:34, Taipei Approach instructed CI611 to fly direct to CHALI3. At 1512:12, CM-3 [the flight engineer] contacted China Airlines Operations with the time off-blocks, time airborne, and estimated time of arrival at Chek Lap Kok airport. At 1516:24, the Taipei Area Control Center controller instructed CI611 to continue its climb to flight level 350, and to maintain that altitude while flying from CHALI direct to KADLO 4 . The acknowledgment of this transmission, at 1516:31, was the last radio transmission received from the aircraft.

Radar contact with CI611 was lost by Taipei Area Control at 1528:03. An immediate search and rescue operation was initiated. At 1800, floating wreckage was sighted on the sea in the area 23 nautical miles northeast of Makung, Penghu Islands.

Based on the radar track data, the accident aircraft suffered an in-flight breakup as it approached its cruising altitude of 35,000 ft. 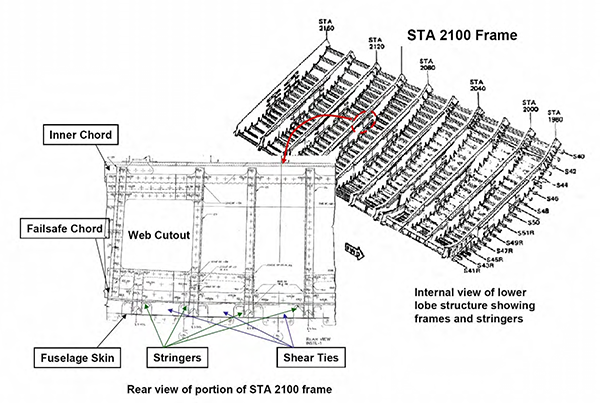 I flew the Boeing 747 for five years and was always impressed with its massive size. It is like seeing the Grand Canyon; photos do not do it justice. You get a false sense of security from the proportions. How can a ten inch crack bring down such a massive airplane? The key to understanding structures on any airplane is that every component works as part of the entire airplane. The skin itself plays a role in holding everything together. 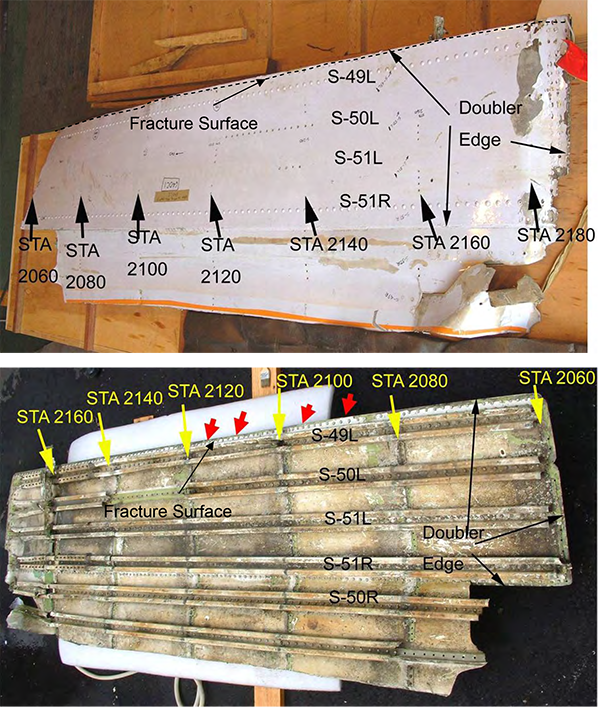 Item 640C1 was a segment of Item 640 approximately from STA 2060 to 2180 and from S-49L to S-49R (Figure 1.16-1). A 23-inch wide, 125-inch long external repair doubler was attached to the skin by two rows of countersunk rivets around its periphery as well as by fasteners common to the stringer and shear tie locations. Universal head rivets were used at S-51R and S-49L while countersunk rivets were used at S-50L and S-51L.

A "faying surface" is the surface on a sheet of metal that faces another; once they are joined you cannot see the surface.

After disassembling the doubler from the skin and removal of the protective finishes, scratching damage was noticed on the faying surface of the skin. This damage consists of primarily longitudinal scratching distributed in an area of 120 inches by 20 inches. The most severe scratching typically occurred at the skin stiffening members such as skin stringers and body frame shear ties. Evidence of an attempt to blend out these skin scratches, in the form of rework sanding marks, was noted over much of the repair surface.

Scratching leaves stress points in the metal, even when the surface is sanded smooth.

Corrosion was noted at several shear tie locations on the skin inboard surface sometimes penetrating completely through the skin thickness.

One additional observation described in the BMT [Boeing Materials Technology Laboratory] report is the large percentage of the overdriven rivets on the repair doubler. Out of 402 rivets, 267 were found overdriven (66%), 15 were under driven (3.7%), and the rest 120 appeared to be normal (29.8%).

The FSR [Boeing Field Service Representative] stated that according to SRM, the permanent repair should cut out the damaged skin, add filler, and place a doubler to cover the damaged area. The doubler must oversize the filler by at least three rows of rivets. If the stringer was damaged, it should be fixed per SRM as well.

The FSR stated that usually the temporary repair was to place an external doubler outside the damaged area (did not cut out the damaged area). He did not know whether the CAL had conducted the permanent repair or not because he did not actually see the repair. The CAL did not inform him when the repair was carried out. The FSR stated that the CAL had QC system to monitor the maintenance operations. CAL did not need a Boeing FSR when it carried out the repair operation. The CAL did not report to Boeing when the permanent repair was completed.

Dado vent modules are installed in the lower portion of the passenger cabin sidewalls just above the floor at selected locations throughout the aircraft. The vent box modules incorporate a dado panel and a louvered air grille as part of a hinged and spring-loaded door. In normal operation, the hinged door is held in the closed position by an over-centered valve mechanism. In the event of a rapid decompression originating in the lower lobe, the differential pressure between the main deck and lower lobe will trip the valve and the hinged door will swing open into the sidewall to provide additional venting to prevent structural collapse of the floor. Once open, the hinged door will remain in the open position until each individual door is manually reset.

Nineteen out of 65 installed dado panels were recovered. The position of seven of the recovered panels could not be determined. Of the remaining 12 recovered panels, 8 were from the forward section of the aircraft (zones B, and C), and were found to be in the “closed” position. The other four (two from zone D and two from zone E) were found in the “open” position. The recovered dado panels suggest that the aircraft experienced a rapid decompression in the aft lower lobe area and the dado panels in this area opened to balance the lower pressure in the lower lobe.

Evidence of fatigue crack was found and confirmed by both CSIST [Chung-Shan Institute of Science and Technology] and BMT on the piece of wreckage identified as Item 640. There was a cumulative length of 25.4 inches, including a 15.1-inch continuous fatigue crack and other smaller fatigue cracks aft and forward extending from hole +14 to hole 51.

Based on the findings from CSIST and BMT, the Safety Council examined the origin of the fatigue cracks and the length of the existing continuous crack in the skin prior to the in-flight breakup in this subsection.