Other crews have suffered similar loss of Situational Awareness and have taken off on the wrong runway. One of the advantages of airline operations, airport familiarization, can also be a detriment. The crew was used to a certain pattern at this airport and when the pattern was changed, they failed to adapt. 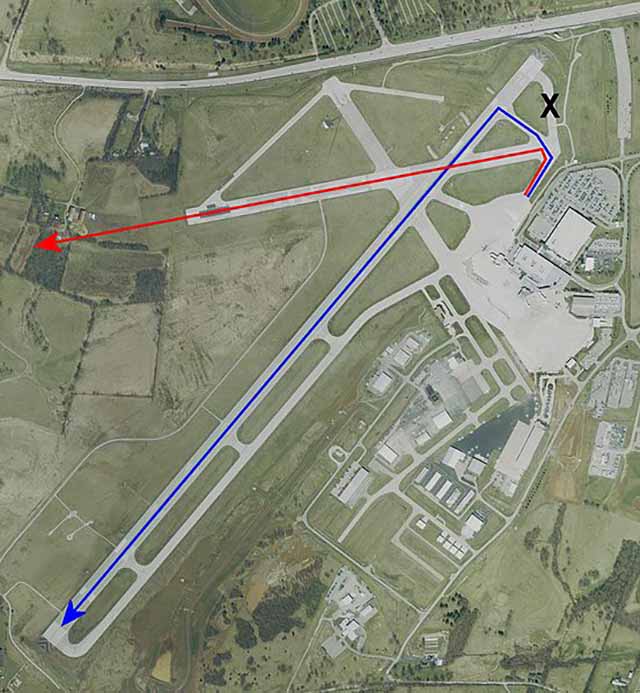 While the Runway Awareness Alerting System goes a long way to preventing this kind of accident, even it can be ignored. The best defense is a ritualized call out technique of always, without exception, doing the following:

If you have a Runway Awareness Alerting System, the box lets you know when your heading is within 20° of the runway, but you should acknowledge that as a ritual. (That way, when the RAAS doesn't do that, your ritual will be missing something and perhaps you will notice.)

The cockpit voice recorder (CVR) recording began about 0536:08. At that time, the flight crew was conducting standard preflight preparations. About 0548:24, the CVR recorded automatic terminal information service (ATIS) information “alpha,” which indicated that runway 22 was in use. About 1 minute afterward, the first officer told the controller that he had received the ATIS information.

Flight data recorder (FDR) data for the accident flight started about 0558:50. The FDR showed that, at some point before the start of the accident flight recording, the pilots’ heading bugs had been set to 227º, which corresponded to the magnetic heading for runway 22.

FDR data showed that, about 0604:33, the captain stopped the airplane at the holding position, commonly referred to as the hold short line, for runway 26. Afterward, the first officer made an announcement over the public address system to welcome the passengers and completed the before takeoff checklist. About 0605:15, while the airplane was still at the hold short line for runway 26, the first officer told the controller that “Comair one twenty one” was ready to depart at his leisure; about 3 seconds later, the controller responded, “Comair one ninety one … fly runway heading. Cleared for takeoff.” Neither the first officer nor the controller stated the runway number during the request and clearance for takeoff. FDR data showed that, about 0605:24, the captain began to taxi the airplane across the runway 26 hold short line. The CVR recording showed that the captain called for the lineup checklist at the same time.

About 0606:24, the captain called “one hundred knots,” to which the first officer replied, “checks.” At 0606:31.2, the captain called, “V one, rotate,” and stated, “whoa,” at 0606:31.8. FDR data showed that the callout for V1 occurred 6 knots early and that the callout for VR occurred 11 knots early; both callouts took place when the airplane was at an airspeed of 131 knots. FDR data also showed that the control columns reached their full aft position about 0606:32 and that the airplane rotated at a rate of about 10º per second.

The airplane impacted an earthen berm18 located about 265 feet from the end of runway 26, and the CVR recorded the sound of impact at 0606:33.0. FDR airspeed and altitude data showed that the airplane became temporarily airborne after impacting the berm but climbed less than 20 feet off the ground.

Runway 4/22, the air carrier runway, was 7,003 feet long and 150 feet wide. It had high intensity runway lights.54 Runway 4/22 also had centerline lights and runway end identifier lights, but they were out of service at the time of the accident because of a construction project (as discussed in this section). Runway 4/22 conformed with the FAA airport certification requirements specified in 14 CFR 139.55

Runway 8/26, the general aviation runway, was used for about 2 percent of the airport’s total operations. It was not subject to the requirements of 14 CFR 139. Runway 8/26 was 3,501 feet long and 150 feet wide, but the paint markings limited the usable runway width to 75 feet. Runway 8/26 was used only for flights conducted when daytime visual flight rules (VFR) prevailed and for aircraft that weighed less than 12,500 pounds. Although the runway was equipped with runway edge lights when the width was 150 feet, these lights had been disconnected since 2001 when the runway was designated for daytime VFR use only. Runway 8/26 crossed runway 4/22 about 700 feet south of the runway 4/22 threshold. A 2,000-foot distance-remaining marker and a 1,000‑foot distance-remaining marker appeared on the north side of runway 8/26 after the intersection with runway 4/22. The hold short line for runway 26 was about 560 feet from the hold short line for runway 22.

FDR data showed that, in response, the first officer pulled the control column full aft and that the airplane rotated at a rate of about 10º per second, which is three times the normal rotation rate. This abnormal column input showed that the first officer also recognized that something was wrong with the takeoff.

Although numerous cues, including the lack of runway lighting, were available to indicate that the airplane was not on the assigned runway, the flight crew had not correctly interpreted these cues or noticed them until after it was too late to successfully abort the takeoff. The Safety Board concludes that the flight crew recognized that something was wrong with the takeoff beyond the point from which the airplane could be stopped on the remaining available runway.

The captain was responsible for establishing the tone in the cockpit so that disciplined adherence to standard operating procedures would be maintained and crew vigilance would not be reduced. However, as recorded on the CVR, the captain told the first officer several times, “at your leisure,” with regard to his performance of checklists, which was indicative of a casual cockpit atmosphere. The first officer apparently adopted this casual attitude when he told the controller that the flight was ready to depart at his leisure.

According to Comair procedures, the captain was responsible for calling for the taxi, before takeoff, and lineup checklists, but the CVR did not record the captain formally call for the before takeoff checklist. Instead, after the first officer finished the taxi checklist, the captain stated about 1 minute later, “finish it up your leisure,” referring indirectly to the need to conduct the before takeoff checklist. Also, as previously stated, the captain performed an abbreviated taxi briefing, which was contrary to company guidance, and the flight crew engaged in a nonpertinent conversation while the airplane was in a critical phase of flight, which was not in compliance with the sterile cockpit regulation and company procedures. The abbreviated briefing and the nonpertinent conversation were also examples of the flight crew’s casual cockpit atmosphere.

The Safety Board concludes that the flight crew’s noncompliance with standard operating procedures, including the captain’s abbreviated taxi briefing and both pilots’ nonpertinent conversation, most likely created an atmosphere in the cockpit that enabled the crew’s errors.

The National Transportation Safety Board determines that the probable cause of this accident was the flight crewmembers’ failure to use available cues and aids to identify the airplane’s location on the airport surface during taxi and their failure to cross‑check and verify that the airplane was on the correct runway before takeoff. Contributing to the accident were the flight crew’s nonpertinent conversation during taxi, which resulted in a loss of positional awareness, and the Federal Aviation Administration’s failure to require that all runway crossings be authorized only by specific air traffic control clearances.