This accident would make a good case study for airline hiring practices. The first officer had a track record of busted checkrides with all the red flag buzz words including a phrase that should have kept her from getting an interview in the first place: "poor airmanship." But I will leave that to others. 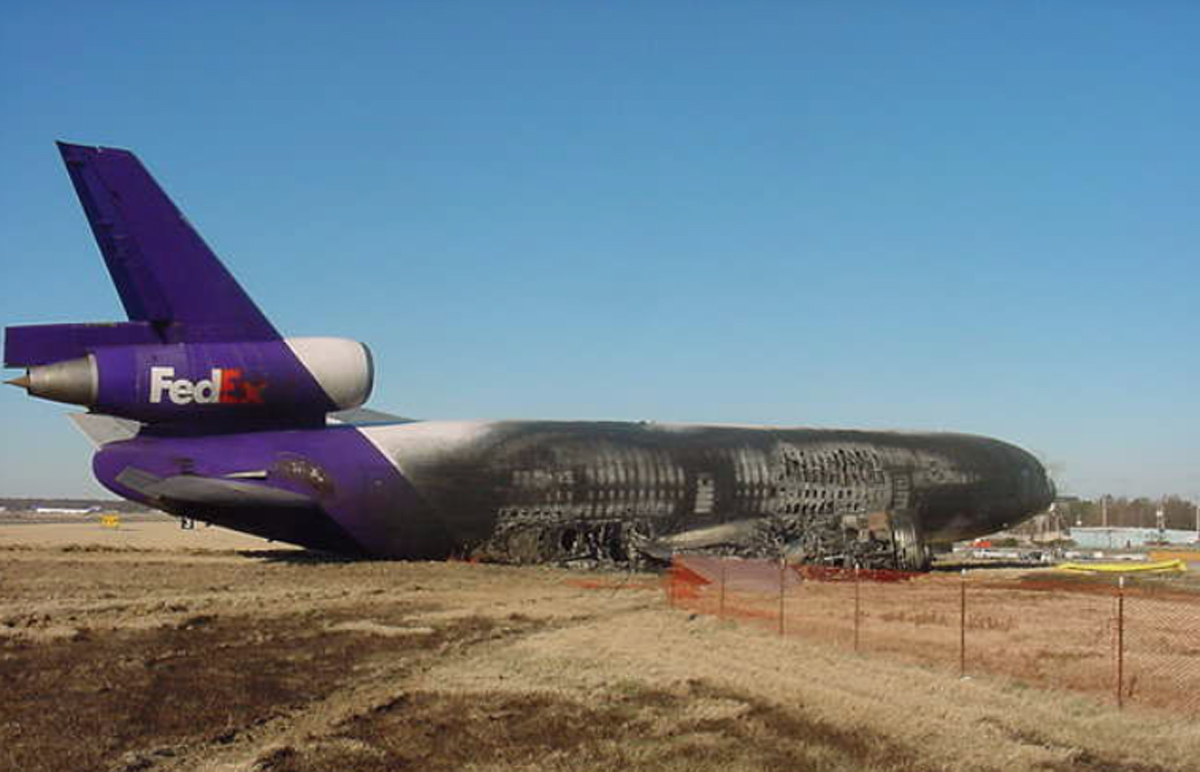 The primary focus of this case study is the proper use of crosswind landing techniques. The MD-10 uses a crab on approach followed by a de-crab initiated at 200 feet AGL. The copilot did that correctly but then relaxed all crosswind controls at 100 feet AGL. I suspect that as the aircraft started to weather vane and drift both pilots froze as evidenced by the fact the captain didn't say anything about the drift and the first officer did not flare. The aircraft landed hard in about a 6° crab, causing the right landing gear to collapse and destroying the airplane. The lesson is obvious: you need to actively fly the airplane during each phase of landing until it is stopped. More about crosswind landings: Crosswind Landing.

Both pilots stated that the landing flare was normal, including proper alignment with the runway centerline and compensation for wind conditions below 200 feet. The captain indicated that he thought they experienced a "strong gust" of wind during the landing, and both pilots described the landing as firm but otherwise normal. However, FDR evidence and physical evidence, including tire markings on the runway, indicated that the airplane touched down with both main landing gear assemblies and the nose gear well right of the runway centerline on a heading about 5.6° left of the runway heading.

The right main landing gear collapsed during the landing roll, and the outer cylinder fractured into six pieces.

Placing a pilot with such limited experience in large aircraft at the controls of a very large airplane is unfair to the operator, the pilot, and to the public.

13,000 hours of flight time in smaller aircraft will go far in cementing small aircraft procedures into a pilot. One of the problems with the airline scheduling system is such a pilot will be faced with years of reserve duty with very few landings. Though the first officer had 15,000 hours of total time, she was relatively inexperienced when it came to handling and landing large jets.

A review of the first officer's employment, flight, and training records revealed that two of her DHC-8 captain proficiency checkrides (on April 7 and 13, 1994, while she was employed by Mesaba Airlines) were unsatisfactory. According to Mesaba Airlines, the check airman who conducted both proficiency checkrides indicated that the unsatisfactory results were because of "generally poor airmanship."" As a result of the first officer's unsatisfactory performance during the April 13 checkride, the FAA inspector who observed that checkride required her to be reexamined for her ATP certificate by an FAA check airman under the provisions of 49 CFR, Chapter 447, Section 44609 (currently codified as Section 44709).14 On May 15, 1994, the first officer satisfactorily completed the reexamination.

I am a bit surprised that FedEx would hire a pilot with the words "poor airmanship" documented.

Crosswind landings are accomplished by flying the final approach in a wings level attitude with a crab into the wind. At approximately 200' agl, align the fuselage with the runway by smoothly applying rudder and maintain runway centerline by lowering the upwind wing. In high crosswinds, consideration should be given to commencing the align maneuver prior to 200'. The align maneuver shall be established by 100' agl.

The FOM listed the following guidelines for acceptable landing performance:

The National Transportation Safety Board determines that the probable causes of the accident were 1) the first officer's failure to properly apply crosswind landing techniques to align the airplane with the runway centerline and to properly arrest the airplane's descent rate (flare) before the airplane touched down; and 2) the captain's failure to adequately monitor the first officer's performance and command or initiate corrective action during the final approach and landing.