There is plenty of blame to go around on this accident, everything from the crew's inability to deal with passenger pressure to get into a day-only airport after sunset, to a poorly worded NOTAM forbidding circling approaches at night when those were the only kind of approaches available. 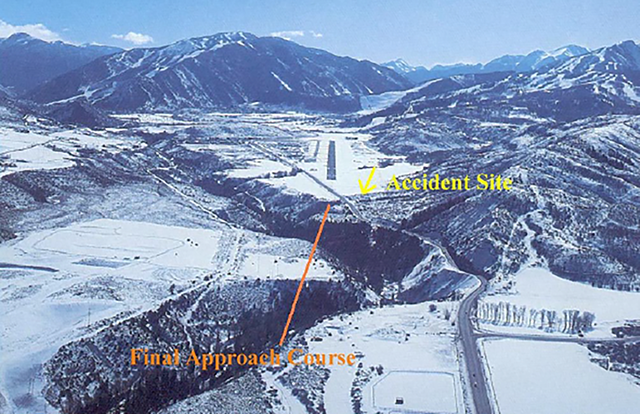 Yes, the crew flew the instrument approach poorly by violating several step down altitudes, but the worst offense in my view was both pilots had their eyes outside while nobody was inside flying the airplane. Had they had a robust set of mandatory callouts, the pilot flying would have had greater confidence "staying inside" while the other pilot remained outside.

The airplane's departure from LAX at 1711 (1611 Pacific standard time) was 41 minutes later than originally scheduled because of the late arrival of the passengers, including the charter customer. The flight was planned for 1 hour 35 minutes, so the estimated arrival time at ASE was 1846, 12 minutes before the airport's nighttime landing curfew.

Statements early in the cockpit voice recorder (CVR) recording indicated that the flight crew was aware of the nighttime landing restriction at ASE. The CVR transcript indicated that, about 1831:06, the captain stated, "well, there's the edge of night right here." About 1831:24, the first officer asked the captain about the time of official sunset for ASE. The captain replied "six twenty eight" and then stated, "so we get thirty minutes after sunset. So six fifty eight . . . about . . . seven o'clock." About 1837:04, the first officer called for the approach briefing. The captain then stated, "we're . . . probably gonna make it a visual . . . if we don't get the airport over here we'll go ahead and shoot that approach . . . and . . . we're not going to have a bunch of extra gas so we only get to shoot it once and then we're going to Rifle." The first officer acknowledged this information.

About 1847:30, the approach controller made a blanket broadcast that the pilot of an airplane (a Cessna Citation, N900MF) saw the airport at 10,400 feet and was making a straight-in approach, to which the first officer stated, "ah, that's good." (This airplane landed without incident at the airport about 10 minutes before the accident.) About 1847:41, the captain informed the controller that, "I can almost see up the canyon from here but I don't know the terrain well enough or I'd take the visual." About 1847:51, the first officer stated, "could do a contact but . . . I don't know," followed by his statement, "probably we could not." The first officer also stated, about 1848:04, "remember that crazy guy in this Lear[jet] when we were . . . on the ground in Aspen last time and he [stated that he could] see the airport but he couldn't see it." The captain did not respond to either of the first officer's statements.

About 1853:57, the flight attendant asked whether a male passenger could sit on the jumpseat in the cockpit. About 11 seconds later, the flight attendant instructed that passenger to make sure his seatbelt was on, and the CVR recorded a sound consistent with a seatbelt buckle. About 1855:05, the flight crew heard, over the approach control frequency, the pilot of N898R transmit his intention to execute a missed approach. Afterward, the captain stated, "the weather's gone down they're not making it in," and an unidentified male voice in the cockpit stated, "oh really."" The approach controller subsequently cleared N898R to continue on the missed approach procedure.

About 1856:06, the approach controller cleared the flight crew for the VOR/DME-C approach,13 advised the crew that the airplane was 5 miles from the Red Table VOR (the initial approach fix), and instructed the crew to cross the VOR at or above an altitude of 14,000 feet. The first officer acknowledged this information.

About 1856:23, the first officer said, "after VOR you are cleared to twelve thousand seven hundred." About 1856:42, the approach controller made a blanket broadcast that ATIS information India was current and that the visibility north of the airport was 2 miles. The approach controller then instructed the flight crew to contact ASE local control, and the crew established contact with the local controller about 1857:28. The local controller informed the flight crewmembers that they were following a Challenger airplane (N527JA) that was 2 miles from the runway, reported the wind at 240º at 5 knots, and cleared the airplane to land on runway 15. About 1857:55, the first officer acknowledged the clearance to land. The captain then asked the first officer for the DME at the 12,700-foot step-down fix. The first officer replied, 3 DME (south of the Red Table VOR).

The airplane crashed into terrain while in a steep left bank about 2,400 feet short of the runway 15 threshold, 300 feet to the right (west) of the runway centerline and 100 feet above the runway threshold elevation. The accident occurred at 39º14.315 minutes north latitude and 106º 52.637 minutes west longitude. The time of the accident was 34 minutes after official sunset. The CVR stopped recording about 1901:58.

The business assistant of the client who chartered N303GA stated, in a postaccident interview, that his employer had chartered the airplane because he was hosting a party in Aspen. The business assistant indicated that Avjet called him about 1630 and informed him that the passengers were not at the airport and that the latest time the airplane could depart was 1655. He stated that he immediately began to track down the passengers and found out that all but two (including his employer) were in the airport parking lot. The charter department scheduler who handled N303GA on the day of the accident indicated that she told the business assistant that the flight would instead have to go to the airport at Rifle if the two passengers did not arrive shortly.

The charter department scheduler who handled N303GA on the day of the accident indicated that the captain stated, during an en route conversation about 1830, that it was important to land at ASE because "the customer spent a substantial amount of money on dinner."

Execution of the instrument approach procedure

According to the intent of the NOTAM, the instrument approach procedure to ASE was not authorized after 1855. As a result, the flight crew should not have been attempting this procedure to the airport.

After passing ALLIX, the airplane maintained a descent rate of about 2,200 feet per minute and an airspeed of about 125 knots. When the airplane reached altitudes of 11,200, 10,700, and 10,300 feet, Avjet's Operations Manual required the first officer to call out, "1000 to go [until landing minimums]," "500 to go," and "approaching minimums," respectively. However, the CVR did not record any of these callouts.

The airplane began to descend again about 1900:49 at a rate of 2,200 feet per minute. The local controller noticed that the airplane had prematurely descended below the 10,400-foot step-down altitude and asked the flight crewmembers whether they had the runway in sight. About 1900:51, the first officer and the captain stated, almost simultaneously, "affirmative" and "yes now yeah we do,"" respectively. These statements were communicated only to the other pilot, but, about 1 second later, the first officer informed the controller that the runway was in sight. Radar data indicated that the airplane was at an altitude of 9,750 feet at the time but that it had not started maneuvering toward the airport.

Evidence indicated that, at that point, the flight crew probably did not have the runway in sight or had it in sight only briefly.

Pressure on the flight crew

The charter customer's communications both before and during the flight, stressing the importance of landing at ASE, most likely heightened the pressure on the flight crew. According to the charter customer's business assistant, his employer became "irate" when he was informed about the possible diversion to an alternate airport. The business assistant also stated that he was told to call Avjet and emphasize that the airplane was not going to be redirected. The Avjet charter department scheduler indicated that the captain felt that it was important to land at ASE because of the substantial amount of money that the customer spent for a dinner party.

In addition, the CVR indicated that, about 1853:57, the flight attendant escorted an unidentified male passenger to the jumpseat, which he occupied for the remainder of the flight. [ . . . ] the captain stated, "the weather's gone down they're not making it in," to which this passenger replied, "oh really." Also, when this passenger asked "are we clear?" about 1858:13, the captain responded, "not yet" and "the guy in front of us [N898R] didn't make it in either." This passenger again replied, "oh really." The CVR did not record any other comments by this passenger, except for an unintelligible comment about 1900:08 regarding the snow. However, the presence of this passenger in the cockpit, especially if it were the charter customer, most likely further heightened the pressure on the flight crew to land at ASE.

The National Transportation Safety Board determines that the probable cause of this accident was the flight crew's operation of the airplane below the minimum descent altitude without an appropriate visual reference for the runway.

Contributing to the cause of the accident were the Federal Aviation Administration's (FAA) unclear wording of the March 27, 2001, Notice to Airmen regarding the nighttime restriction for the VOR/DME-C approach to the airport and the FAA's failure to communicate this restriction to the Aspen tower; the inability of the flight crew to adequately see the mountainous terrain because of the darkness and the weather conditions; and the pressure on the captain to land from the charter customer and because of the airplane's delayed departure and the airport's nighttime landing restriction.