This was a case of a highly experienced pilot flying a fully functional airplane into a lake short of the runway. The visibility was a factor but not causal. The cause was the pilot's incorrect view of the impact of glide path on landing distance.

Some pilots think they can out perform their aircraft's design landing numbers by flying a flatter approach with the aim of touching down as slow as possible, as early as possible. I've witnessed this in everything from a Gulfstream III, which is the aircraft involved in this accident, to a Boeing 747. The technique not only doesn't work, it is very risky. For more about this, see: Landing.

Note: The source is the official BEA report translation, which isn't without its problems. But it does provide enough to draw conclusions and derive a few lessons.

At 11:37, the driver looks at 4 NM DME. The controller cleared for landing indicating a calm wind.

The aircraft then takes a greater vertical speed and passes below the normal plan of approach. It violently struck the surface of the water to about 0.6 NM from the beginning of track.

Thanks to a mobile phone, a fisherman, who was in the landing zone, gave the alert. Occupants evacuated the aircraft that was taking on water quickly. They did not have time to carry lifejackets and used cushions as floats. Another fisherman, who was not far from there, recovered them in his boat to lead them into a nearby port. In a State of hypothermia, they received first aid before be taken to a hospital for medical examinations. The hostess was suffering, in addition, a fracture of the left arm.

Much has been made that the airplane sunk almost immediately, which is true. The design of most aircraft includes very large holes in the fuselage to allow air to escape as part of the pressurization system. For a planned ditching, this aircraft includes a way to close those valves in anticipation of a ditching. But in this case, they were anticipating a landing, so the open valves let the water in and the aircraft sank.

The fisherman who gave the alert indicated that he had seen the plane follow a straight trajectory down regularly as if he wanted to land on the Lake. He said that the water of the Lake was no ride at this time there.

According to other people, who were on board vessels or near shore, the mist floated above the Lake at the time of the accident.

The crew made no problem mechanical, instrumental or control. He said he flew this unit for several years. The captain had already used the facilities of Chambéry the previous week by good weather conditions. The day of the accident, he was pilot. A few nautical miles from the threshold, while he had the runway in sight, he had decided to descend under the glide with the aim of achieving a "flatter" approach, to pass the threshold to 125 kt and avoid braking on the runway.

During its descent under the normal plan of approach, he was dazzled by the Sun and lost the track of views. He tried to find external visual references but it distinguished over the surface of the water. He wore no glasses Sun but only the corrective lenses from view. At no time, he considered a missed approach procedure.

The first officer confirmed this account of events. During the descent on the glide, it was conducting checks before landing. Then, he tried, too, to find external visual references.

The ILS to Runway 18 at Chambery at the time was very steep, about 4.6°, based on an intercept height of 4231' above the touchdown zone when 8.7 nautical miles out. Contrast that with a more normal ILS which is typically 3.0˘. It can be tempting to "duck under" the established glidepath. But this destabilizes your approach and, as was true here, robs you of vertical guidance. 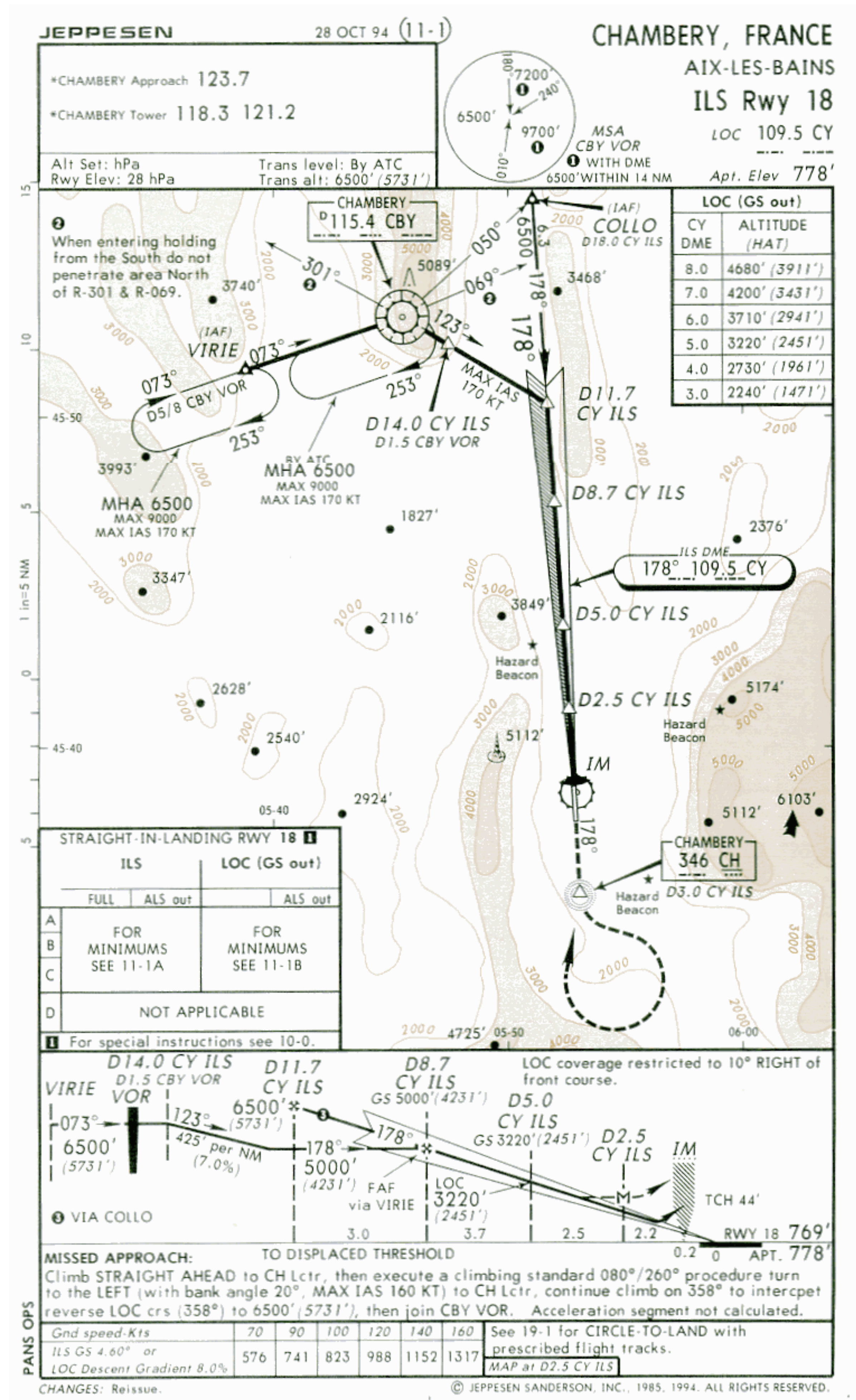 The threshold of runway 18 of Chambéry airfield is located south of the lac du Bourget, at 600 m from the shore, at an elevation of 769 feet. Preferred qfu: 178, the approach is above water. Precision approach is performed using an ILS full on a 4.7° glide slope, or 8%. The available landing distance is 1,750 m.

As a result of the impact with the surface of the water, the tail is separated from the rest of the aircraft according to a line break to the level of "recorders" compartment. All rest on a sloping bottom covered with mud.

Most of the wreckage was recovered between 19 and February 21, 1998, the tail on 5 June 1998. Examination of these pieces brought any matter relevant to the determination of the causes of the accident.

The mist is a suspension in the air of microscopic droplets of water or wet hygroscopic particles, reducing visibility. Each of these droplets diffuses the light it receives, thus causing an ambient luminance, or brightness of the atmosphere. Overlapping the gloss of benchmarks and to the environment, this phenomenon alters their contrast. When the contrast is less than a certain threshold, the mark becomes indistinguishable. It is located beyond the distance limit called visibility (cf. Craig F. Bohren, Journal of the Meteorological Society of France, March 1998).

Overnight and until the mid morning from 6 February, the Valley in which lies the Lake of le Bourget and the aerodrome of Chambéry is affected by low stratus and wind calm.

Diurnal warming is more efficient on the Earth than on the water. Also on Earth, the air heats up pretty quickly, dissipate the clouds (clear sky) and visibility improves from 2,500 m to 11 h, around 4,000 m an hour later, while on the water the lower layers air warms more slowly and remains heavily loaded humidity. The clouds dissipate, but the mist, on a thickness of a few hundred feet, is dense. The vertical visibility is good, but horizontal and oblique visibility are low, particularly to the South in the direction of the Sun.

Because of the calm wind, no ride will disturb the surface of the water of the Lake which has a uniform appearance. Right and left side of the device, the banks are remote. Ahead of the aircraft, the shore remains invisible due to the haze and brightness that reduces the contrasts. Thus, no outside Guide allows the crew to visually estimate his height.

From Geneva, the aircraft presents itself for an approach to runway 18 precision. In the final, seeing the runway, the captain continued his approach by Visual ground reference. About 4 NM, the threshold, and at a height of 2,000 feet between he decided to increase the rate of descent, bringing his camera below the glide plane. Thus, the slope of the path increases momentarily, but drag associated with the landing configuration avoids a significant increase in speed. The intention of the captain is to then reach the threshold on a much lower slope course, on which the aircraft must slow significantly, to pass the threshold with a relatively low speed and stopping the aircraft through a moderate braking.

While the first officer performs the checks before landing, the plane passes under the normal plan of approach. The captain then loses sight of the runway. Nevertheless, it continues its descent hoping to see the Visual reference to the surface. It enters the lower layers of the atmosphere, where the fog is denser and oblique visibility is very low. The Sun face it dazzles and compromises his perception of cues already little obvious, such as analysis above.

The captain then reduces the rate of descent of his aircraft which is then at a relatively low height with a horizontal speed still high. He's still not exterior visual cue discerns. The co-pilot, who finished his checks, searches also outside references, in vain. The aircraft struck the surface of the water while the crew has seen it.

Actions of the crew

Execution of the procedures described in the documentation provided to the crews included for the co-pilot, in the announcement of the decision altitude passage. This announcement was a response from the captain "Land" or 'Go around'. If he had then already lost track of view, appropriate response "Go around" would lead to the interruption of the approach.

The application of box "If visual contact is lost minimum, beyond a go around is announced by the PF and executed" would lead the crew to interrupt his approach, even after the passage of the decision altitude, at the time of the loss of visual references.

It is easy to forget approach call outs when things are going routinely, but that gets us out of the habit. Had this crew been more disciplined with their call outs, the accident could have been avoided. More about this: Call Outs.

Collision with the surface of the water is the result of the loss of visual references during a final approach in which the crew voluntarily reduced his plane under the plan for the ILS in a sector affected by a layer of haze, and secondly the lack of decision of interruption of the approach.