The Bureau d’Enquêtes et d’Analyses pour la sécurité de l’aviation civile (BEA) did a very nice bit of investigative work on this mishap with one exception: the conclusion wasn't forceful enough. Before I explain, let me dive into the very nature of aircraft mishap investigation.

In theory, the primary motivation for investigating an aircraft crash is prevention. You don't want it to happen again. When I went to the Air Force Mishap Investigation Course and later to the Chief of Safety Course, we were told that our standard of proof was different than what the Judge Advocates General would use. They had to prove something beyond any reasonable doubt. In the safety business we don't have that restriction. Nobody was going to jail as a result of our findings, but somebody could be spared a future mishap. This report dances around the obvious because they don't have proof beyond all reasonable doubt.

My goal here is prevention. We can learn a few things from this mishap that can save lives. So let's do that. If I were writing this mishap report my findings, my personal opinions, would read as follows:

Those are pretty harsh, I agree. But I hope it instills the following thoughts:

During a visual approach to land on runway 13 at Le Castellet aerodrome, the crew omitted to arm the ground spoilers. During touchdown, the latter did not deploy. The crew applied a nose-down input which resulted, for a short period of less than one second, in unusually heavy loading of the nose gear. The aeroplane exited the runway to the left, hit some trees and caught fire.

The runway excursion was the result of an orientation to the left of the nose gear and the inability of the crew to recover from a situation for which it had not been trained. The investigation revealed inadequate pre-flight preparation, checklists that were not carried out fully and in an appropriate manner.

This is a pretty easy thing to miss and will normally result in the airplane seeming to "float" when the main wheels touch. This is so because the ground spoilers normally come up as the wheels spin up or once the weight on wheel switches compress. If the ground spoilers are not armed, they will not automatically pop up. Because of this, many Gulfstream pilots become paranoid about this switch.

If the main landing gear were firmly on the runway, pressing the brakes at this point would result in the nose coming down hard. The main gear were apparently not completely down and the aircraft's weight on wheels system was alternating between the "air mode" and the "ground mode," allowing the thrust reversers to arm and then disarm before finally re-arming.

With the ground spoilers not deployed, the feel of the airplane after the flare is completely different. Depending on the pitch trim condition at touchdown, the nose could very likely have a tendency to pitch up. It took the pilot four seconds and nearly 1,400' to bring the nose down. At this point over half the runway was behind them.

A strong nose-down input may have been a response made in panic to the unusual pitch feel combined with the imperative of stopping the airplane on the runway remaining. (At this point they only had 1,625' remaining.) 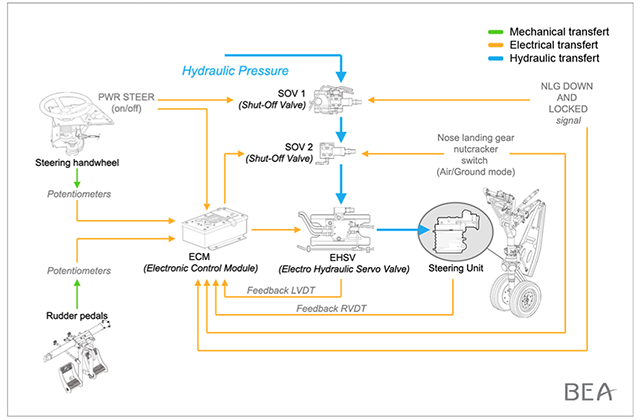 The examination of the site and the wreckage showed: 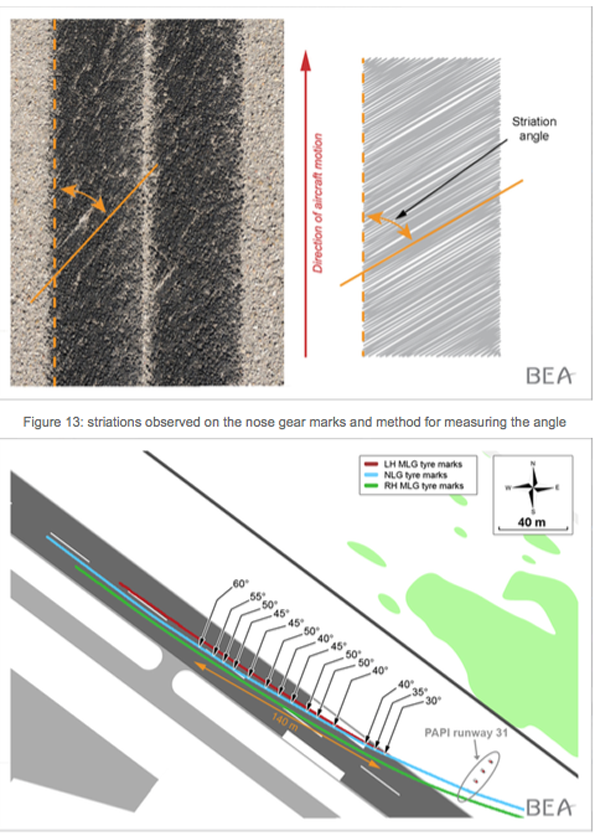 If the nose gear is deflected to the left while the airplane is still headed mostly straight, the rubber tends to rub off to the right, the so-called striation marks.

In order to study the dynamics of the aeroplane on the runway and the various possibilities that might explain the lateral deviation to the left and the runway excursion, Gulfstream, the NTSB and BEA independently carried out several simulations of the aeroplane’s trajectory.

The [Cockpit Voice] recording started during taxiing in Nice. This made it possible to determine, during the flight:

The Captain was employed by American Airlines between 1977 and 2008. He had been flying as Captain on Boeing B777s since 2003. After retiring from American Airlines, he was hired as a pilot on a part-time basis by UJT on 25 September 2010. He followed the UJT operator’s conversion training (lasting three days between 25 and 29 October 2010) and then passed the type rating course for the Gulfstream GIV within the CAE Simuflite training organization based in Dallas (Texas) in November 2010.

Several UJT pilots who flew with the Captain said he was not accustomed to short flights. They also agreed in stating that he was not comfortable with handling the FMS, carrying out checklists and in his role as PM in general. He had a strong personality and sometimes imposed his decisions. Two copilots who flew with him reported that he had already forgotten to arm the ground spoilers. One of them said that during a landing, the Captain, although PM during the flight, had pushed the controls during the landing roll so that "the directional control was more effective".

Forgetting to arm the ground spoilers delayed the deployment of the thrust reversers despite their selection. Several MASTER WARNING alarms were triggered and the deceleration was low. The crew then responded by applying a strong nose-down input in order to make sure that the aeroplane stayed in contact with the ground, resulting in unusually high load for a brief moment on the nose gear. After that, the nose gear wheels deviated to the left as a result of a left input on the tiller or a failure in the steering system. It was not possible to establish a formal link between the high load on the nose gear and this possible failure. The crew was then unable to avoid the runway excursion at high speed and the collision with trees.

The accident was caused by the combination of the following factors: