I was recently asked about the crash of a flight that killed members of Reba McEntire’s band, which involved a problem with the term "Radar Contact" and the crew's assumption that Los Angeles Center would be responsible for terrain separation. The reader's questions provide a lesson that is still valid today.

There are actually two accidents that are pertinent here. Looking at both provide several flight lessons.

I am flying a 135 charter flight out of SDM (Brown Field) at night near San Diego in a few days. Ingrained in my memory is the crash that killed members of Reba McEntire’s band on March 16, 1991. As a 40 year resident of San Diego I remember the crew flew into a mountain east of SDM.

I can’t find the details to my satisfaction in the NTSB database as it is now apparently on microfiche.

As I recall, the crew called LA Center on departure and were told RADAR contact, cleared on course, which they took as cleared direct to the first fix, and they hit the hills. I understand we are the final authority on safety at all times. However, my understanding is that if LA Center had said RADAR contact, then given a vector, LA Center would be responsible for terrain separation at that point. Again, I understand we are responsible for separation as PIC ultimately, but here are my 2 questions:

With regards to your first question, your memory is partially correct. I suspect you may be conflating two separate, but very similar crashes. The first is Hawker Siddeley HS-125-1A N831LC, which carried members of Reba McEntire’s band, and crashed into Otay Mountain on March 16th, 1991. The second is Learjet 35A N30DK, a medevac flight, which crashed into Otay Mountain on October 24th, 2004. 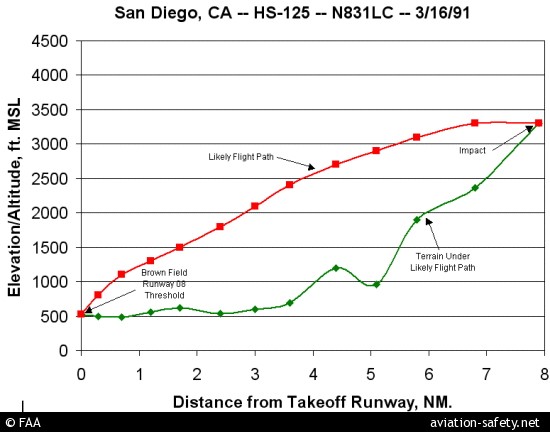 Both flights departed KSDM (Brown Field Municipal Airport, San Diego, CA) runway 08L. Both flights departed under VFR in the early morning darkness with the intention of obtaining their IFR clearances once airborne. In the case of N831LC, the Captain (Donald Holms) radioed the local Flight Service Station (FSS) 3 times before takeoff and told the specialist he did not have the instrument departure procedure for KSDM. The Captain expressed concern of remaining clear of the San Diego (Lindbergh) Terminal Control Area (TCA). The Captain informed the Specialist of his departure plan, to which the Specialist said, “…that’ll be fine.”

According to the Los Angeles Times:

A few minutes before the takeoff, Holms, who was not familiar with the San Diego area, twice radioed a nearby FAA flight service station, asking the specialist there whether there were unique departure instructions for pilots taking off from Brown, according to a transcript released by the NTSB. Flight service specialists advise pilots on flight plans but do not serve as air traffic controllers.

The same specialist, who has not been identified, answered both calls, but despite the conversations that ensued, Holms apparently remained uncertain about the instructions. He called a a third time, reminding the specialist that he would be flying under visual flight rules.

During his third conversation with the specialist, Holms complained that the instructions he was getting from the specialist would force him to fly “right into the TCA without a clearance,” according to the transcript.

“Yeah. Sure. That’ll be fine,” the specialist said.

The transcript indicated that the specialist never mentioned the mountainous terrain, and FAA officials said it was Holms’ responsibility, flying under visual flight rules, to know where the mountain was.

At about 1:45 a.m., a few minutes after takeoff, the jet was flying at 3,300 feet when the left wing clipped an outcropping of 3,500-foot Otay Mountain, sending it cartwheeling into the rocky peak with a massive explosion.”

The NTSB report on N831CL did place partial blame on the FAA for the crash: 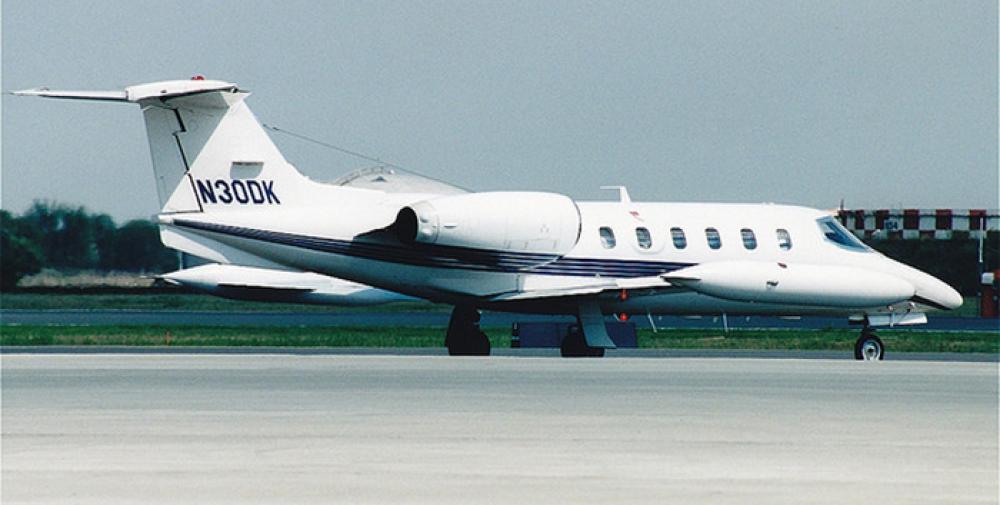 In the case of medevac flight N30DK, the Learjet departed KSDM under VFR because the tower was closed, and despite a number of different attempts, the crew was unable to obtain an IFR clearance on the ground prior to departure. The Learjet was climbing through 1,800 ft MSL when the Captain established radio communication with SOCAL (Southern California) Approach Control. The SOCAL Controller asked the Captain to “ident” and advised the Learjet was in “radar contact.” The SOCAL Controller said: “Fly heading of zero two zero [and] maintain VFR, as soon as you get above five thousand, I’ll have an IFR clearance for you.” [CFIT on a dark night departure, Mark Lacagnina, Flight Safety Foundation.org/AviationSafetyWorld/September 2006]

According to the NTSB report:

“…the heading issued by the controller resulted in a flight track that continued toward the mountains.”

"The airplane departed under VFR at night and was being handled by an air traffic controller when it crashed into terrain at the 2,256-foot level of a mountain that was located 8 nm east of SDM. The initial impact was about 100 feet below the base of an overcast cloud layer. The flight crew decided to depart under VFR from runway 8L after unsuccessful attempts to obtain an IFR clearance using the communication radios. The flight crew did not attempt to obtain the IFR clearance by telephone, even though they had cellular and satellite telephones on board the airplane.”

In years since these crashes, NTSB, FAA and industry have greatly improved procedures for departing airports when the tower is closed or non-towered airports. After the N30DK crash, brown-colored topographic contour lines were added to NOS approach charts to show terrain. Additional information regarding high terrain east of the field was added to the Airport/Facility Directory (Chart Supplement) for KSDM. TAWS systems were mandated for all U.S.-registered turbine-powered airplanes configured with six or more passenger seats.6 And SOCAL/NORCAL telephone numbers were published that allow pilots to contact a Flight Data Specialist directly to obtain an IFR clearance and void time. The Aeronautical Information Manual (AIM) was amended to clarify recommended procedures and pilot/controller responsibilities in these situations.

With regards to your second question, “When and only when on a vector, not cleared direct to a fix, nor cleared on course, is it now ATC’s responsibility to keep the aircraft clear of terrain in this case with this crew?”

The short answer is yes, and the SOCAL Controller in the case of N30DK was faulted by the NTSB for his failure to do so. (Failure to issue a low altitude alert, minimum safe altitude warning (MSAW), or ask if the pilot can maintain own terrain clearance).

"NOTE− Pilots of pop−up aircraft are responsible for terrain and obstacle clearance until reaching minimum instrument altitude (MIA) or minimum en route altitude (MEA). Pilot compliance with an approved FAA procedure or an ATC instruction transfers that responsibility to the FAA; therefore, do not assign (or imply) specific course guidance that will (or could) be in effect below the MIA or MEA.""

The key point here is departing VFR, or under Visual Flight Rules. It is a longstanding understanding that when operating under VFR, it is the pilot’s responsibility to see and avoid all other aircraft (maintain visual separation) and obstacles (maintain own terrain clearance). However, in the case of N30DK, the NTSB report was quite clear on the SOCAL Controller’s shared, and to a greater extent, primary responsibility:

"Although the flight crew is responsible for maintaining terrain clearance while operating under VFR, FAA Order 7110.65P, chapter 4-2-8, states that, when an aircraft is operating under VFR below minimum IFR altitudes and the flight crew requests an IFR clearance, the controller should ask the crewmembers if they would be able to maintain terrain and obstruction clearance during the climb to the minimum IFR altitude. The order also states that, if the controller provides an instruction (such as turn to a heading of 020 ), the responsibility for terrain clearance is transferred to the FAA. The order advises controllers not to “assign (or imply) specific course guidance that will (or could) be in effect below the MIA or MEA.” During a postaccident interview, the controller stated he was unaware of this responsibility.

Regardless of his failure to appropriately apply the procedures for handling a VFR-IFR flight, the controller was aware of the topography near SDM and that the airplane was quickly approaching a mountainous area; thus, he should have taken action to alert the flight crew. The controller’s explanation that he was not required to monitor or provide terrain clearance assistance to a VFR flight is contrary to the primary purposes of ATC, which are to prevent a collision and to remain vigilant for situations that warrant the issuance of alerts to flight crews regarding hazardous proximity to terrain, obstacles, and other aircraft. The controller’s apparent perception that flight crews operating under VFR are always able to avoid terrain and obstacles regardless of flight conditions is incorrect, and his failure to take appropriate action placed the airplane in an unsafe situation. The controller had the knowledge and opportunity to alert the flight crew to an unsafe condition, but he failed to do so."

In conclusion, crews should be patient, rigorously follow all published guidance for such departures, make use of all available resources, including VFR charts, published Obstacle Departure Procedures (ODP) or Visual Climb Over Airport (VCOA) procedures, cell and sat phones and void times, and avoid departing under VFR whenever possible. For flexibility, most FAR Part 135 operators hold OpSpecC077 which provides a means to depart the terminal area under VFR and obtain and IFR clearance once airborne. However, there are numerous requirements, limitations and provisions to use this OpSpec procedure. The final guard rail is the TAWS.

IMPROPER PLANNING/DECISION BY THE PILOT, THE PILOT'S FAILURE TO MAINTAIN PROPER ALTITUDE AND CLEARANCE OVER MOUNTAINOUS TERRAIN, AND THE COPILOT'S FAILURE TO ADEQUATELY MONITOR THE PROGRESS OF THE FLIGHT. FACTORS RELATED TO THE ACCIDENT WERE: INSUFFICIENT TERRAIN INFORMATION PROVIDED BY THE FLIGHT SERVICE SPECIALIST DURING THE PREFLIGHT BRIEFING AFTER THE PILOT INQUIRED ABOUT A LOW ALTITUDE DEPARTURE, DARKNESS, MOUNTAINOUS TERRAIN, BOTH PILOT'S LACK OF FAMILIARITY WITH THE GEOGRAPHICAL AREA, AND THE COPILOT'S LACK OF FAMILIARITY WITH THE AIRCRAFT.