I started flying Boeing 747's the year of this mishap and the "why" was a mystery for a while but the community banded together and immediately thought they understood "how" to survive the circumstances. Of course they were wrong. So let's tackle the "how" before we get to the "why," because the "why" also explains the reason the "how" doesn't work. Confused? Good, now you are in the right mind-set to tackle this case study.

The accident aircraft flying over Okutama,
from Report, Photo 124.

The flight controls on the Boeing 747 are hydraulically powered with no mechanical backup. The airplane had a great reputation and to the date of this mishap, there had never been a total failure of the flight control system. Each engine drives a separate hydraulic system, AND each control surface has two hydraulic sources, AND each axis has multiple surfaces, even the rudders. The two rudders were each powered by two hydraulic systems, a total of four systems. What we didn't realize was that all four lines had a common path to the tail.

A photo of the crippled airplane shows it was missing its tail and it became apparent the damage took enough hydraulic plumbing to render every flight control on the airplane useless. (Boeing has since installed fuse plugs upstream of this area so a similar rupture will not result in the same loss.)

We in the Boeing 747 world realized our four engines below swept wings gave us the ability to control roll and pitch with engines alone. You could vary left engine thrust against right engine thrust for roll as well as inboard thrust versus outboard thrust for pitch. So we smugly believed we would have done better than these hapless Japan Air Lines pilots, even though simulator test proved getting the airplane onto a runway was extraordinarily difficult.

But what we didn't realize is that without the vertical fin the airplane was highly susceptible to Dutch roll which is normally confronted by an electronic yaw damper or manually through the ailerons. It would be next to impossible to dampen Dutch roll with differential thrust. Add to all that, the aircraft so oscillating would also enter phugoid cycles, that is, it would pitch up and lose speed causing the nose to drop and gain speed, which then cause a pitch up and so on. This is next to impossible to dampen without an elevator. So these pilots did a very good job controlling the airplane for as long as they did.

The airplane suffered a tail strike in 1978, damaging much of the airplane, including the aft pressure bulkhead. Japan Air Lines hired Boeing to make the repairs. One of the repairs didn't go as planned: a manufactured replacement section of the aft pressure bulkhead did not extend far enough to allow a double row of rivets. This could have been the result of other undetected deformations to the structure or just the way the airplane was supported structurally during the repair. A Boeing engineer devised a work around that involved a metal splice wide enough to join sections with a double row of rivets.

The actual repair, however, used a single row of rivets. This is believed to have weakened the connection by 70 percent.

The airplane flew for another seven years as the metal of the splice and joined sections started to crack and finally gave way in 1985.

So I would contend that are not any flight lessons here at all, the ruptured bulkhead turned the airplane into a uncontrollable projectile. The lessons here are for mechanics to follow repair manuals to the letter, question any deviations from those manuals, and to show up for work well rested and alert. The lessons go deeper than that, see: Maintenance Malpractice. 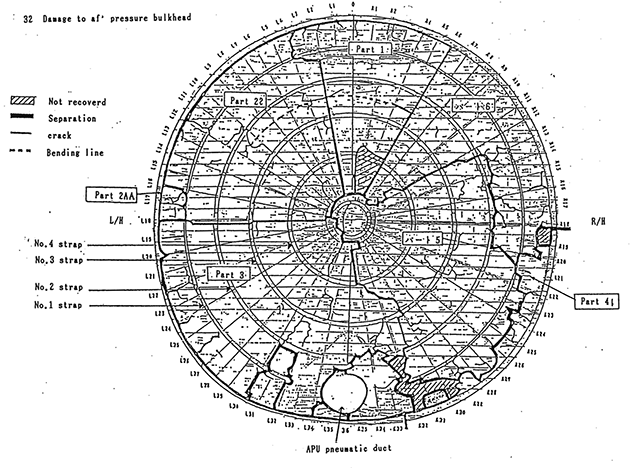 There should have been enough metal overlapping each section to allow two rows of rivets, spaced an inch apart, to create a strong, two-row rivetted joint. For some reason there wasn't enough overlap. (The reasons are discussed below, under Analysis.)

The work actually performed ended up with a narrower splice that has rivets going through the lower dome and splice in two rows (properly) but only once through the upper dome and the splice (improperly). A second splice is added that doesn't add any structural strengthening at all.

We have no idea why this work was done this way; it could have been a mistake followed by an effort to disguise the mistake, or perhaps it was just a misunderstanding. Whatever the reason, the weaker joint went undetected. The airplane flew for the next eight years, each pressurization cycle theoretically weakening the joint until cracks developed and then finally gave way.

The Day of the Crash

The aircraft appeared to be wandering and the controller again called 123 and gave it further heading instructions. News of their distress had gotten to JAL's headquarters and the company called 123 on the company frequency and were told "Ah . . . the R5[cabin] door is broken. Ah...we are descending now."

It appears the cracks started soon after the 1978 repair and continued to grow with each pressurization cycle.

They lost both rudders, the top of the vertical fin, and the aft-most portion of the tail. The airplane has four hydraulic systems, two go to the top rudder and the other two to the bottom rudder. The severed hydraulic lines left the airplane with no hydraulic systems at all. The aircraft does not have cable back ups to the flight controls, so the aircraft at this point was only controllable by use of differential thrust. Since the engines are mounted below the wings, the aircraft can be rolled using left versus right thrust. Since the wings are swept, pitch can be altered using inboard versus outboard thrust. This is quite a challenge in a simulator with an airplane that still has its tail. This aircraft, however, would have been difficult to control even if they still had hydraulics.

The part didn't fit properly so they tried to address fuselage deformation due to the way the airplane was sitting, but that didn't work. What they did next doesn't make sense.

Of course the inspections found nothing wrong, they were made in accordance with the modified plan.