There isn't a lot out there about this mishap and my comments here are my speculation. I think it is a worthwhile thought piece, however, because it illustrates how violating basic instrument flight procedure can be fatal. 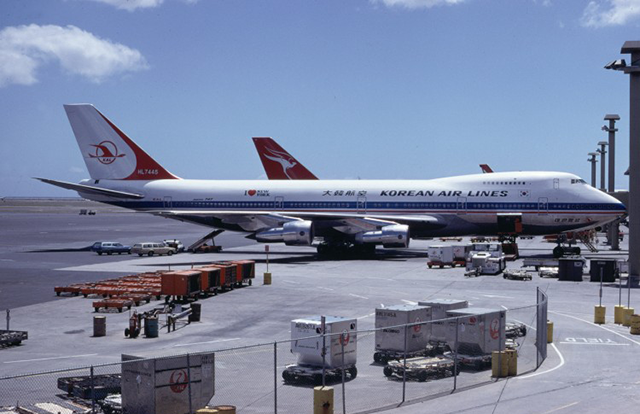 The weather for this approach was not great, but it wasn't beneath the capabilities of the aircraft or a qualified crew. Described as "1000 meters in patchy fog," the minimums for the approach were 550 meters and the Decision Height was 200'.

Doing a little math, we see that at 200' the pilots would have seen the approach lights, but not the runway, allowing them to continue to 100'. (Korean rules mirror those of the United States.) At 100' they would have easily seen the runway. Of course all this depends on them being on the 3° ILS glide path.

Patchy fog can trip up a pilot who doesn't have a lot of instrument experience or the discipline to remain on instruments until a positive transition to visual can be made. If the patchy fog permitted the pilot a momentary glimpse of the runway early, he may have been tempted to dive for the runway, ducking under the glide path. The airplane struck an embankment short of the runway, leading me to believe that is precisely what happened.

A Boeing 747-2B5B passenger jet, registered HL7445, was damaged beyond repair in a landing accident at Seoul-Gimpo (Kimpo) International Airport (SEL), South Korea. There were 198 passengers and crew members on board. The airplane operated on Korean Air Lines flight KE015 from Los Angeles (LAX) to Seoul (SEL) with a refueling stop at Anchorage (ANC). There was a visibility of 1000m in patchy fog as flight KE015 approached Kimpo Airport's runway 14. The aircraft landed 90 metres short of the threshold and contacted a 45 deg embankment slope. The main landing gear was pushed backward and up causing a rupture in the bottom of the plane into the cargo compartment where struts were ruptured. The plane slid down the runway on its nose gear and belly. The wings were intact. No fuel tanks were ruptured. Fire erupted in the cargo compartment area from sparks and hydraulic fluid from the ruptured struts. There was no fuel fire. The plane quickly filled with smoke. The fire entered and impinged on the seats from floor grills. Fire gutted the fuselage quickly. Evacuation was fairly orderly. There were some injuries getting off the plane. The smoke got heavy fairly rapidly. Some survivors suffered smoke inhalation. Of the 18 crew and 208 passengers aboard, 6 crew and 9 passengers suffered fatal fire injuries. Four passengers were seriously injured.

While the weather wasn't great, it wasn't below the capabilities of the airplane or crew. They apparently ducked under the glide path just short of landing, a classic novice instrument pilot mistake.