The bottom line on top: the captain got lost while taxiing for takeoff and decided to takeoff anyway. He ended up plowing into another airplane. 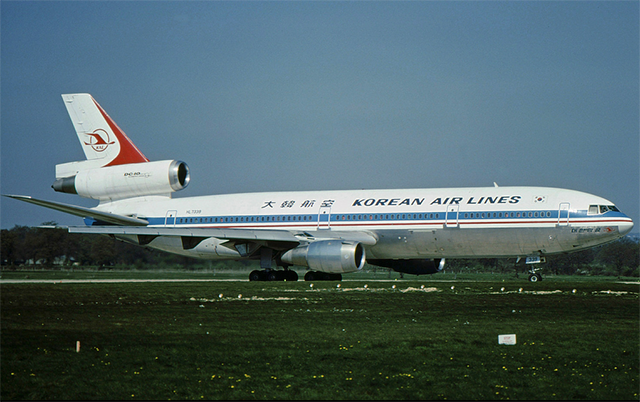 A quote from the captain during an NTSB interview: "I felt unsure that the aircraft was on the correct runway. I looked for identifying markings, but could not see any. I discussed this with my copilot who felt sure that we were on the correct runway. After 3-4 minutes of discussion, I considered taking runway 6R because of my uncertainty. However the runway size and lighting appeared to be correct, so I decided to take off.

In the words of a director of operations I used to work for, "If you are on the ground and ever feel things aren't right, set the parking brake until you do!"

At 1344:18, the pilot of SCA 59 reported on the local control frequency that he was holding short of runway 6L and that he wculd be ready for departure as soon as the RVR improved ta 1,800 feet.

At 1403:39, the local controller requested the pilot of SCA 59 to confirm his position. The pilot confirmed that he was holding at the W-3 intersection.

At 1404, KAL 084 was cleared for takeoff on runway 32. The captain acknowledged the clearance.

KAL 084 collided with SCA 59 on the ground at the departure end of runway 24R (approach end of runway 6L). The KAL 084 captain sighted the PA-31-350, awaiting takeoff clearance, seconds before the collision and rotated the DC-10-30 and applied left right of its previous runway centerline position. The pilot's actions resulted in the center rudder which caused the nose gear to lift and the center main body gear to swing to the main and left main gears straddling the PA-31-350 fuselage and the nose gear passing over it.

The PA-31-350 was pushed rearward by the collision impact but remained on the runway. The right wing of the PA-31-350 was sheared off at the wing root, and the left wing was separated outboard of the left engine nacelle. There were scrape marks and Q an indentation along the top of the fuselage extending aft from over the cockpit area. The vertical stabilizer was separated and the PA-31-350 came to rest on its nose gear, left main gear, and aft lower fuselage.

The DC-10-3C continued off the departure end of runway 24R, demolished seven approach light stanchions (the approach light system for runway 6L), passed through a wooded area, down a gully, and slued to the right before coming to a stop. A fire erupted immediately and destroyed the DC-10-30.

No fatalities resulted from the accident. 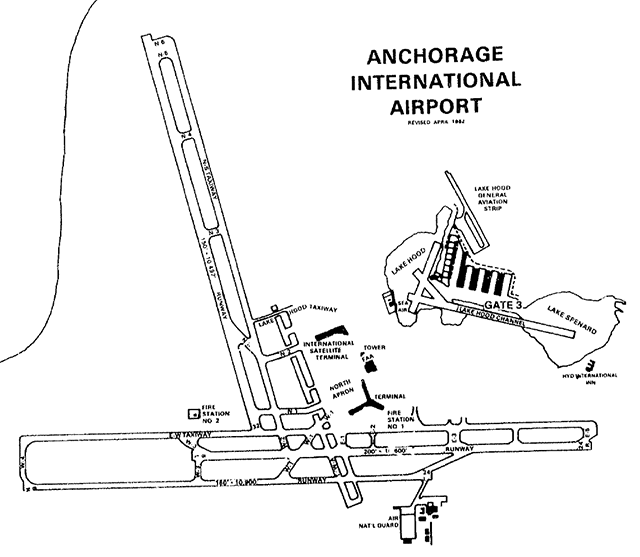 The captain of KAL 084 stated in part: I left the North ramp at 1357. I was instructed to taxi to runway 32, and I turned the aircraft to the left. I could not see the yellow taxi-line, so I turned slightly to the right, attempting to see the taxi-line. I saw the line very dimly through the heavy ice fog. While I was concentrating heavily on following the line, the tower advised me to go on to the east-west taxiway. I thought I saw the taxiway on my right and turned to the right onto it. The visibility was so poor that it was difficult to see the taxiway markings. I continued to taxi, and my copilot [the first officer] confirmed that the north-south taxiway was to the right. At that time, we informed the tower that we were entering the east-west taxiway. The tower then instructed us to hold short on 32 holding point. We thought runway 32 was to the right of the aircraft. The tower then told us to taxi into position and hold. I turned right, entered runway 32, and stopped. Due to the poor visibility, I felt unsure that the aircraft was on the correct runway. I looked for identifying markings, but could not see any. I discussed this with my copilot who felt sure that we were on the correct runway. After 3-4 minutes of discussion, I considered taking runway 6R because of my uncertainty. However, the runway size and lighting appeared to be correct, so I decided to take off. I asked for clearance. I received clearance, and started to take off. 6-7 seconds after beginning my take-off, I saw the other aircraft directly in front of me. I knew that a head-on collision would be fatal for the people aboard both planes, so I turned slightly to the left and lifted the nose of my aircraft. A moment later, I felt and heard the crash. . . .

The National Transportation Safety Board determines that the probable cause of the accident were the failure of the pilot of Korean Air Lines Flight 084 to follow accepted procedures during taxi, which caused him to become disoriented while selecting the runway; the failure of the pilot to use the compass to confirm his position; and the decision of the pilot to take off when he was unsure that the aircraft was positioned on the correct runway. Contributing to the accident was the fog, which reduced visibility to a point that the pilot could not ascertain his position visually and the control tower personnel could not assist the pilot. Also contributing to the accident was a lack of legible taxiway and runway signs at several intersections passed by Flight 084 while it was taxiing.