The NTSB chalks this mishap up to both pilots failing to positively identify a snow-covered runway prior to landing but it involved so much more than that. Both pilots obviously had no problem flying a Category C aircraft on an approach where Category C minimums were not authorized. But after the first approach led to a missed approach, the PIC forcefully talked the SIC into an unplanned circling approach that could not have been flown in a stable manner and probably left them with inadequate time to positively identify the runway. It is doubtful the SIC, who was the pilot flying, ever really saw the runway. 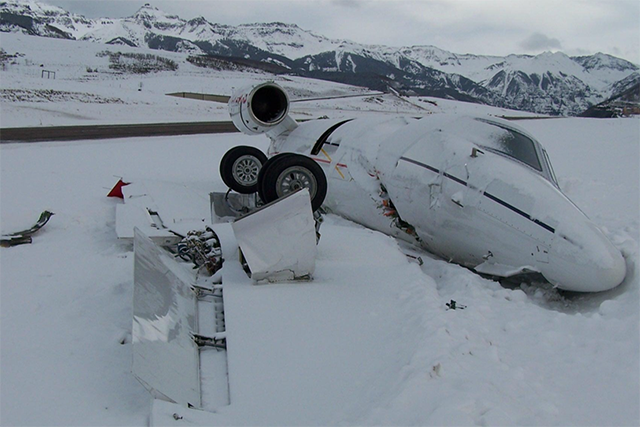 But perhaps even worse than the poor instrument procedures and flawed crew coordination there was a tragic lack of flight discipline.

On January 3, 2009, at 1659 mountain standard time (MST) a Learjet 45XR, N279AJ, sustained substantial damage during an off-runway landing at Telluride Regional Airport (KTEX), Telluride, Colorado. The airplane was owned by LJ279, LLC, Missoula, Montana, and operated by Aero Jet Services, Scottsdale, Arizona. The airline transport pilot in the left seat was not injured and the airline transport pilot in the right sear received minor injuries. Intermittent visual meteorological conditions were present at the time of the accident and an instrument rules flight plan was filed for the Title 14 Code of Federal Regulations Part 91 positioning flight. The cross-country flight originated at the Scottsdale Airport (KSDL), Scottsdale, Arizona, at 1503. 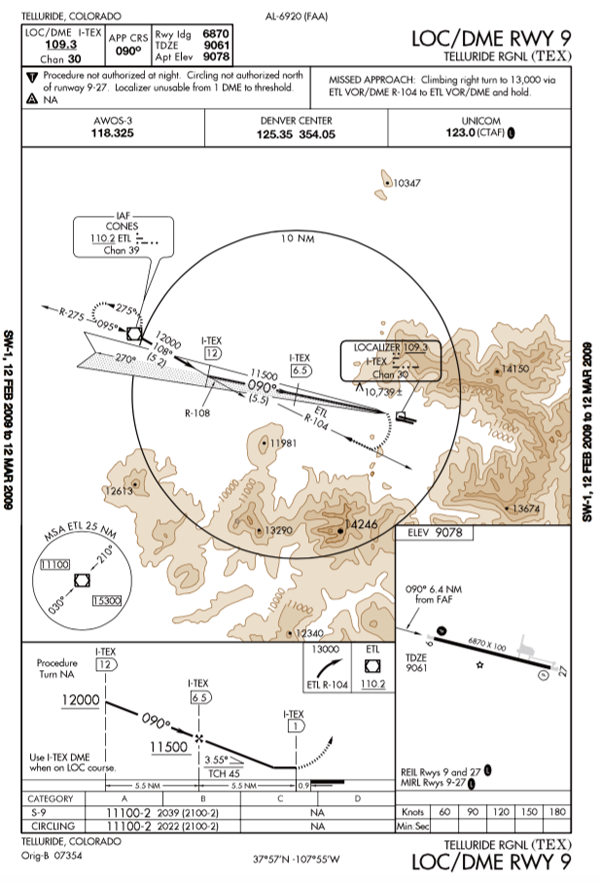 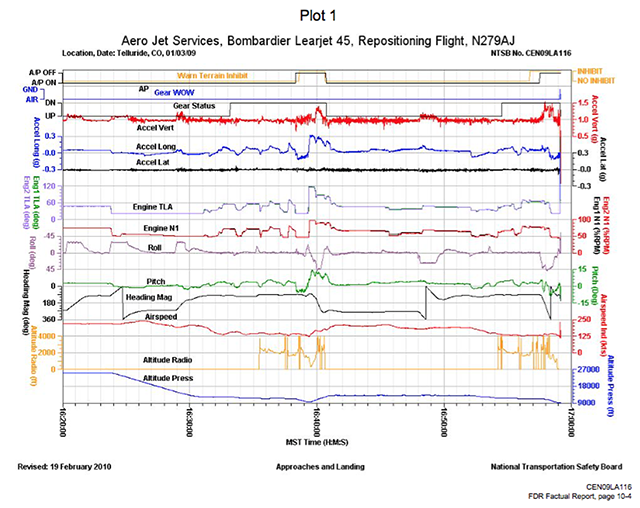 The airspeed during the circle (bottom red line) was clearly around 125 knots, well above the Category B maximum speed for circling at sea level; making a circling approach for this airplane at this airport illegal. Their true airspeed at the approach MDA (11,100') would have been 152 knots; making the decision to circle even more foolhardy.

"It was not until the following night that Mike and I were informed that we had not landed on the runway. I am uncertain on how that came to be, both Mike and I had visually made contact with the definition on [sic] the runway. I can only guess that due to the crosswind that during the round out phase I lost visual references of the runway to cause the aircraft to drift undetected."

The PNF (HOT-2) spotted the runway on the first attempt and tried to coach the PF to the runway but she never saw it and they went missed. During the second approach they had this exchange:

On the second attempt they were at the MDA and had this exchange:

The MDA was 2,039' above the runway; they would have needed to spot the runway at 6.4 nm to have a normal 3° glide path. The FAF was 500' higher than the MDA but only 6.5 nm from the end of the runway. A stable instrument approach was impossible from the FAF at the published FAF altitude. As is typical with many approaches in mountainous areas, you need to spot the runway well before the final approach fix. This should be part of the approach briefing, you don't want to find yourself at minimums approaching the missed approach point and having to figure this out.

More about this: Circling Approach Area.

At their existing true airspeed, their turn radius with 30° of bank would have been 5,500' making their turn diameter 11,000' or 1.81 nm. And this is based on rolling out on top of the runway without a stable approach. So the circling approach would have been impossible with less than 30° of bank, as we shall see . . .

As they rolled out the PNF spotted the runway . . .

In her post accident statement, the PF said she spotted the runway prior to landing. It is evident here she did not see the runway while below the MDA.

An on-scene investigation was conducted by a Federal Aviation Administration (FAA) inspector. The initial examination of the area indicated that the airplane had touched down about 20-feet to the right, and off, the runway. Additionally, the airplane's wings were torn from the fuselage. The tail section had separated just aft of the engines. No pre-impact anomalies with the airframe and engines were detected during the investigation.

The failure of both pilots to positively identify the runway prior to landing.

The airplane was destroyed; but it was a cheap airplane and nobody got seriously hurt so the NTSB didn't put a lot of effort into this investigation. They didn't issue a full report and the statement of probable cause was one sentence long. They could have done a lot better: