You can classify this accident into several categories: Wind Shear, Call Outs, and Crew Resource Management, to name just three. But those three categories miss the problem entirely.

To really get a feel for the cause of this crash, take a look of an excerpt from Robert Gandt's excellent book, Skygods:

Another Pacific island. Another dark night, with rain and gusty winds, and yet another instrument approach to a runway without an electronic glide slope. A Pan Am 707 plowed through the jungle short of the runway, then burned. Ninety-one people perished. By now it was clear to everyone, even the Skygods. The crash of Flight 806 on the island of Pago Pago brought to ten the number of Pan American 707s destroyed. Pan Am was littering the islands of the Pacific with the hulks of Boeing jetliners. 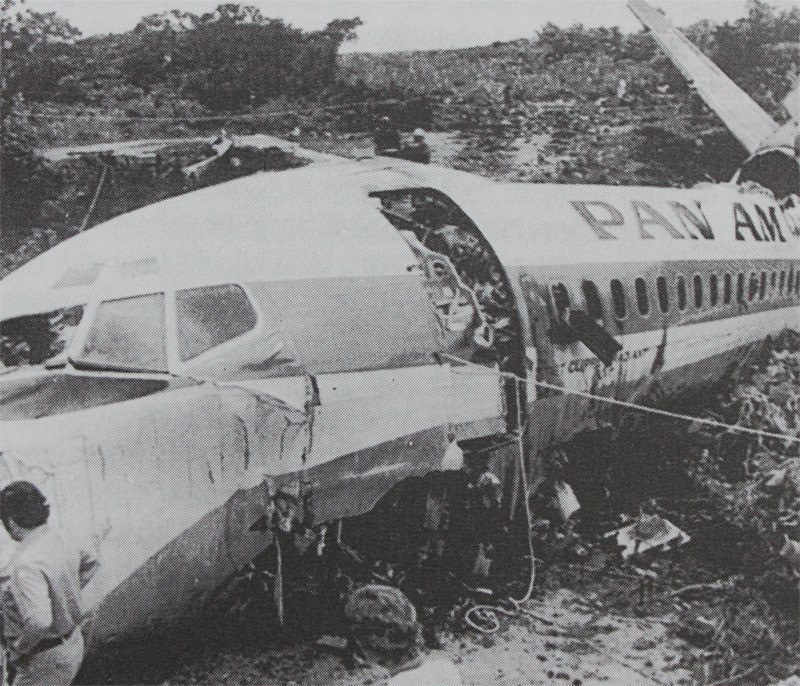 This was another incident in a series of 13, 11 of which pointed to a problem with the Crew Resource Management culture Pan American World Airways at the time. They were able to reverse this culture and became one of the safest airlines in the world.

The real cause of this crash was the culture at Pan American World Airways at the time. They had cashed in their position as the world's first truly international airline, operating the famous "Clippers" of flying boat fame, into the leading edge of the airline jet age. Unfortunately, the airline that brought the titles "captain" and "first officer" into aviation also brought the culture that said the captain was always right and nobody would dare challenge the captain.

This was the 12th crash of a Pan American World Airways Boeing 707, the 10th due to pilot error. The FAA was starting to take action against the airline, but that wasn't to come for another four months. Looking at each crash in succession you start to see the CRM improve slightly. In this accident, the assigned third officer, called the first officer in the narrative, did offer two corrections to the captain during the approach. First was a very diplomatic "You're a little high." Then came "turn to your right," which would have been appropriate since the localizer was offset from centerline. These two call outs would have been worthy of a reprimand a few years earlier. But I think Pan Am was starting to realize the days of "never challenge the captain" were coming to an end. Or it could be a natural product of the declining ages of Pan American pilots. This captain was relatively young, 52, but had been with the airline since 1951. The third officer was 43 and had been with the airline since 1966.

Five minutes after the crash the winds were 020 / 13 G 35. There is speculation that the winds could be indicative of a micro-burst, which wasn't a term in use at the time. But the winds before and after do not suggest a micro-burst along their approach path, but the increasing headwind does explain the why the aircraft went above glide path at first.

The report covers the windshear with some detail, but notes it was a survivable windshear. That is certainly true. Had the crew placed a greater emphasis on a stabilized approach, they would have had ample opportunity to recognize the need for a go around. But I think there is more to it than that.

The captain had been off flying status for more than a year and was likely to be a bit "rusty" in his instrument skills. It appears to me that a common thread in many of these Pan American pilot error accidents was that the captain wasn't as good as he needed to be, and the crew was reluctant to point that out. You would be right to argue that no sane copilot is going to willing accept an unrecoverable situation for fear of angering the captain. But I think this kind of culture beats other members of the cockpit crew to the point they stop actively monitoring because there is often very little to gain from doing so. The guy in the right seat was the "third officer" which is a nice way of saying he was a first officer in training. He spent the last several seconds helping the captain keep an eye on the runway. No one, it seems, was watching the flight instruments.

The "little high" comment was at 2340:22.5, the rapid descent began at 2340:26, and the crash at 2340:42. In the next paragraph the report puts the focus on the windshear but the paragraph after that suggests the captain was simply pushing over to make the runway. I think the latter is probably the primary driver here.

The National Transportation Safety Board determines that the probable cause of the accident was the flightcrew's late recognition and failure to correct in a timely manner an excessive descent rate which developed as a result of the aircraft's penetration through destabilizing wind changes. The winds consisted of horizontal and vertical components produced by a heavy rainstorm and influenced by uneven terrain close to the aircraft's approach path. The captain's recognition was hampered by restricted visibility, the illusory effects of a "blackhole" approach, inadequate monitoring of flight instruments, and the failure of the crew to call out descent rate during the last 15 seconds of flight.