On the surface, this seems to be a case of a poorly flown instrument procedure or perhaps just a misunderstanding of the sporadic nature of non-directional beacons. But there is much more to it than that. 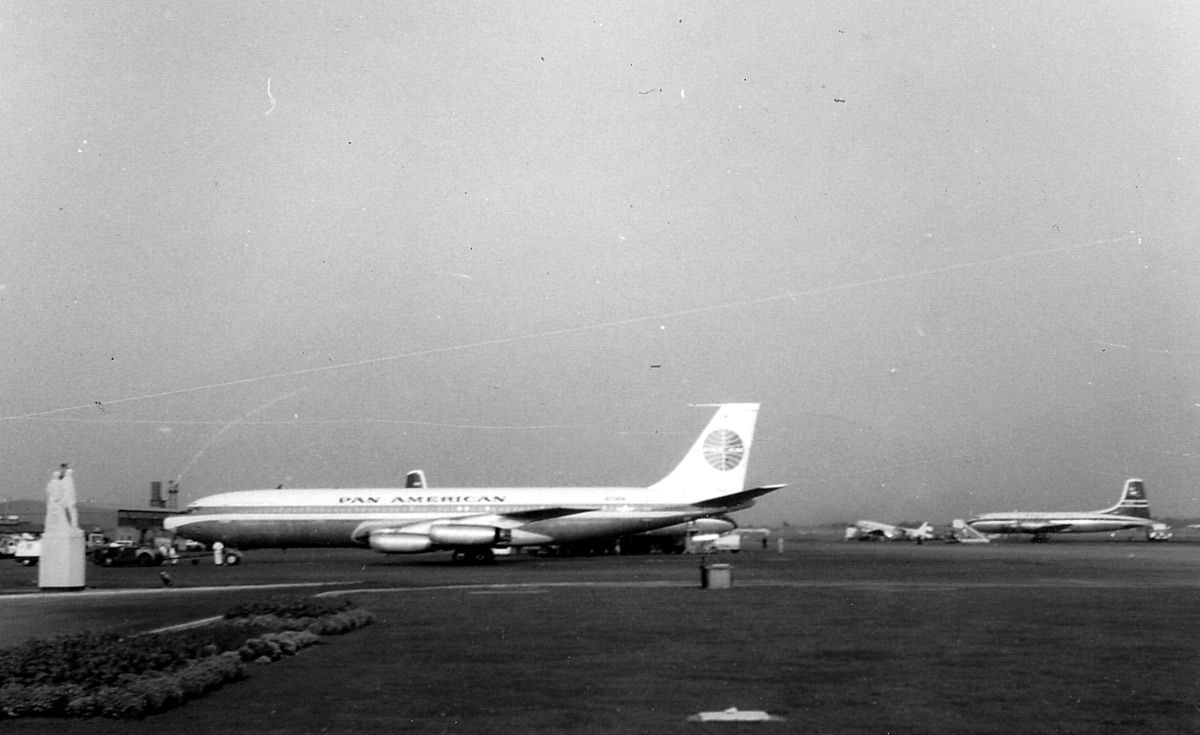 This was the thirteenth incident in a series of 13, 11 of which pointed to a problem with the Crew Resource Management at Pan American World Airways at the time. This was the "straw that broke the camel's back," in that the FAA finally took action: (from Gandt, p. 116)

The FAA's findings confirmed the dismal facts that the internal Operations Review Group had already determined: Pan Am was crashing airplanes at three times the average rate of the United States airlines. Worse, Pan Am's accident rate was on the rise, a reverse of the steadily decreasing industry-wide accident experience with jet airliners. The report was scathing. Pan Am's accidents in the Pacific, declared the FAA, involved "substandard airmen." Training was inadequate, and there was a lack of standardization among crews. [ . . . ] But at the heart of Pan Am's troubles, according to the FAA, were human factors. [ . . . ] When applied to airline cockpits, it had the same taint as pilot error.

Pan American World Airways had no choice but to clean house and examine the way they flew airplanes. They were able to reverse their company culture and became one of the safest airlines in the world.

The flight was arriving from the north, navigating to Bali by heading directly to a Non-Directional Beacon (NDB) while not under radar contact by anyone. It was up to them to find the beacon using two Automatic Direction Finder (ADF) radio receivers.

In the days before GPS, there were parts of the world where using an NDB was the only choice and pilots learned to treat the ADF needle with a great deal of skepticism. The needle was rarely steady and was known to point to the nearest power source, to be fooled by the local topography, or sometimes just point in increments of 40° for no known reason.

I had the misfortune of having to fly in many locations where the NDB was the only choice, but the good fortune to always have either a navigator or inertial navigation system to give me some confirmation of that pesky needle.

You cannot understand what happened to Pan Am 816 unless you understand just how unreliable an NDB can be. See:Non-Directional Beacon.

Note: the approach plate shown is the only one I have for the Bali NDB Runway 09, this one was published 30 years after the crash. But we aren't concerned with the niceties of the approach, the crew missed the runway by 30 nautical miles. What we are interested in is basic instrument procedures. 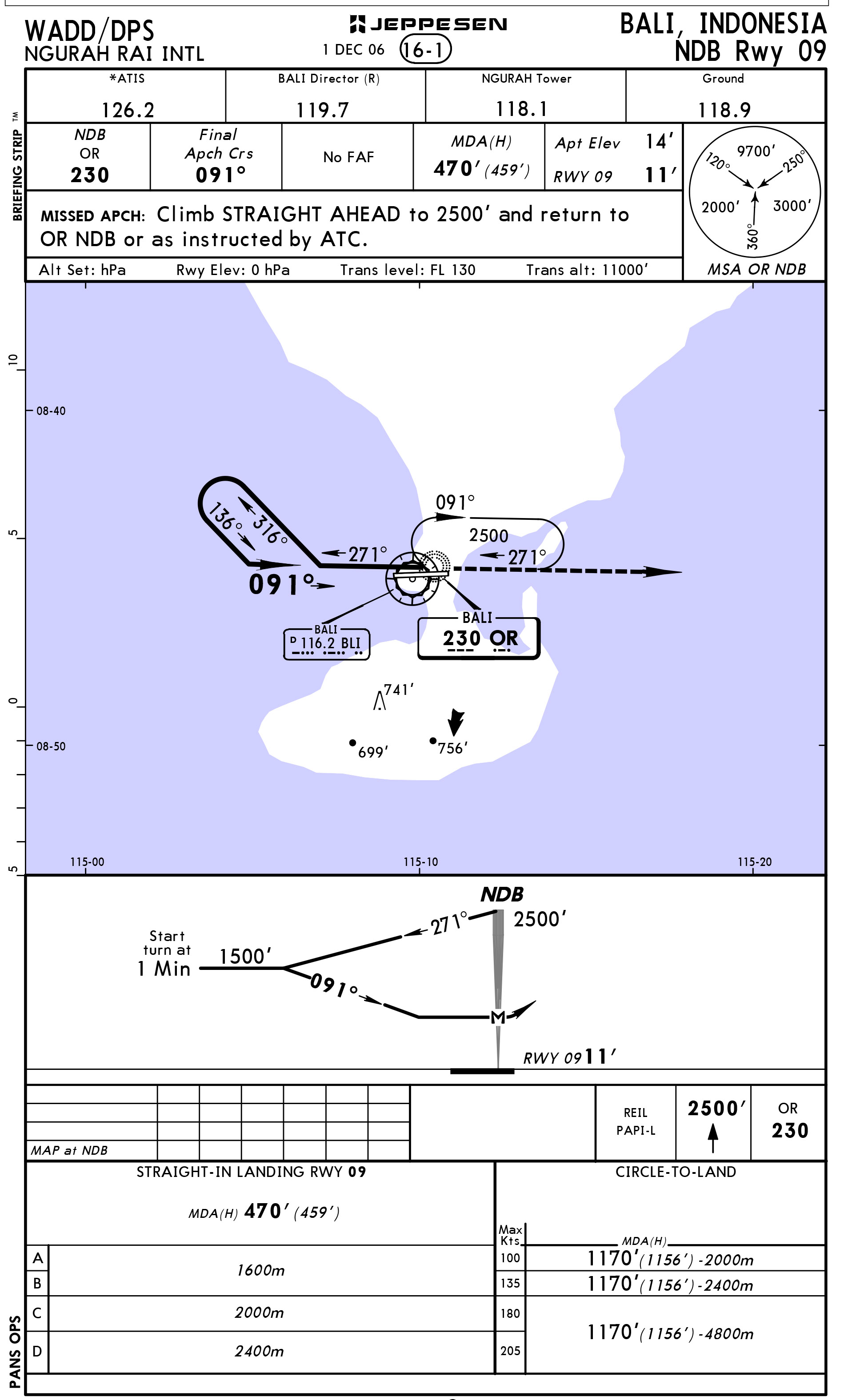 The weather was reported to be cloudless, "the stars were bright and it was moonless." Under those conditions, many island destinations are almost impossible to see at night. I can't imagine any pilot with experience flying in this part of the Pacific would bet his life on one ADF needle while the other is rock steady in the other direction.

The report notes that the first ADF needle made its swing about 30 nm north of the airport, convincing the pilots it was turn to turn right for the course reversal (procedure turn). The report doesn't mention that there happens to be a 4,100 ft mountain there. Perhaps that had something to do with the premature ADF needle swing. But even if it didn't, given the mountainous terrain, the pilots shouldn't have elected to start their turn and descent based on one, unsteady needle. 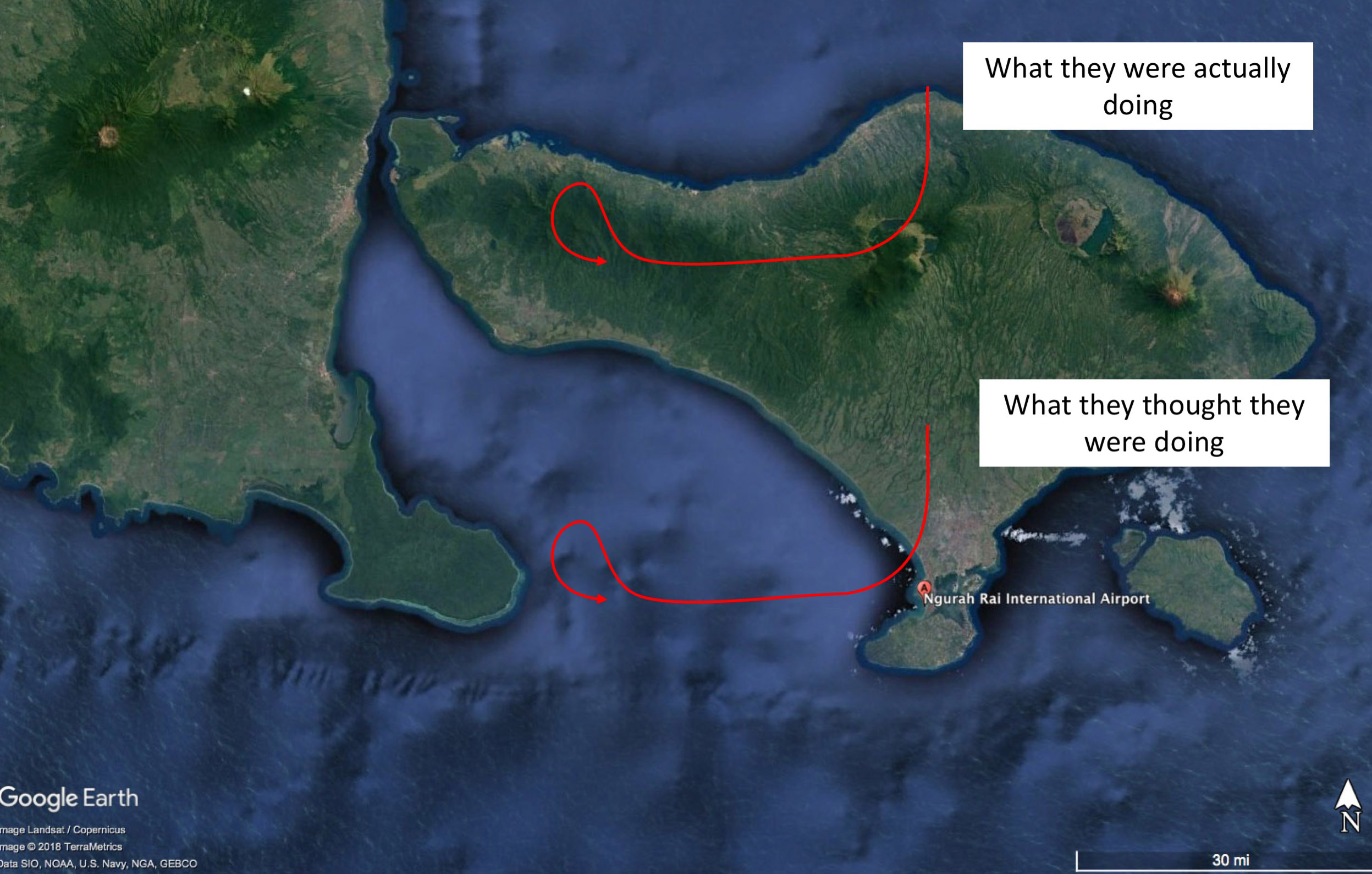 Pan Am 812 ground track, (My reconstruction using the ICAO Circular description and GoogleEarth)

The official "cause" listed by the report would have failed basic the accident investigation report writing I learned at the USAF flight safety officer course. The report says the crash was caused by a premature turn. No, the crash was caused by an airline's culture that (a) permitted the captain to fly with inadequate training and oversight (which led him to the premature turn), and (b) discouraged cockpit crewmembers from actively watching the captain for these kinds of mistakes.

The Board determined that the probable cause of this accident was the premature execution of a right hand turn to join the 263 degrees outbound track which was based on the indication given by only one of the ADFs while the other one was still in steady condition.