There wasn't much left of the airplane and they haven't really nailed down the cause. But, in any case, the airplane was airborne for seventeen minutes with a cabin fire and that was at least three minutes too long. 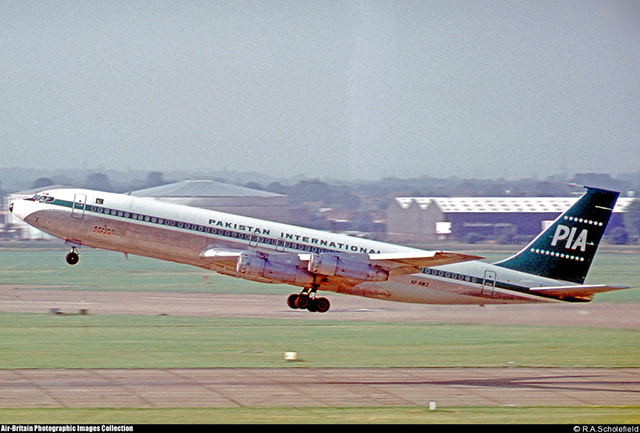 Flight PK740 departed Jeddah at 01:29 for a flight to Karachi. The aircraft was climbing to FL370 when, at 01:47, a stewardess reported a fire near the aft cabin passenger door. The crew started a descent from FL300 and were cleared to descend to 4000 feet. Following a mayday call at 02:03 nothing more was heard from the flight. The aircraft crashed in a level rocky area at an elevation of 3000 feet and burst into flames.

Most of the speculation centers around the origin of the fire and there is little discussion of pilot procedures. As if evident with many of the cabin fire incidents in this time frame, many pilots did not put a priority on getting the aircraft of the ground as soon as possible. They were airborne for 17 minutes after the fire was detected.

"An in-flight fire in the cabin area which, through its intensity and rapid extension, resulted in panic among the passengers and smoke in the cockpit, eventually incapacitating the flight crew. The cause of the cabin fire was not determined."

It was considered that the origin of the cabin fire could have been a leaking gasoline or kerosene stove, carried aboard by Haj pilgrim passengers. Pressure differential could have caused a poorly sealed gasket to leak fuel.

A second possibility is an electrical fire, but the rapid extension of the fire was considered difficult to explain because of the electrical circuit protection devices of the Boeing 707. Sabotage was considered as another possibility, but no evidence of use of an incendiary device was found.

Regardless of the source of the fire, pilot procedures should prioritize getting the aircraft on the ground first, fighting the fire if possible second. This incident, with several others, led to the publication of Advisory Circular 120-80 and the belief that if you don't get the airplane on the ground in fifteen minutes or less, you may not be able to on your own terms.