The VFR traffic pattern can be a dangerous place. The Big Sky Theory never works well, and it especially fails when the "big" sky is narrowed to the confines of an airport traffic area.

It is true that neither aircraft in this mishap were equipped with TCAS or ADS-B and that the tower controller made several crucial mistakes. But it may also be true that the midair could have been avoided had the pilots of either airplane had better situational awareness and used better visual clearing techniques.

We often downplay the complexity of a "simple" VFR traffic pattern because it is one of the very first skills we learn as pilots. If they let a student pilot do it solo, how hard can it be? The NTSB hangs the blame for this midair on the tower controller and the limitations of the "see and avoid" concept. That might be as it should be, but that doesn't do the pilots any good. "Blameless" or not, they are all dead.

I don't mean to be callous, only to illustrate that, as pilots, there are things we can do to stack the odds in our favor. I believe the defining attribute of a fighter pilot is the ability to keep "Good SA" in three dimensions, to be situationally aware of the airplane's environment. That environment includes other aircraft. Had any of the three pilots involved in this midair kept a 3-D map of the pattern and aircraft in mind, this midair could have been avoided. 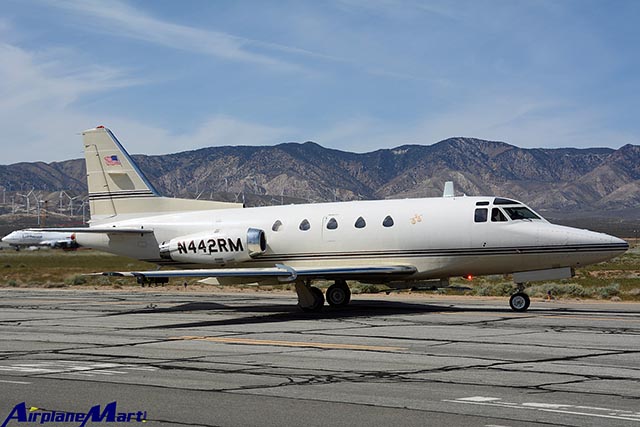 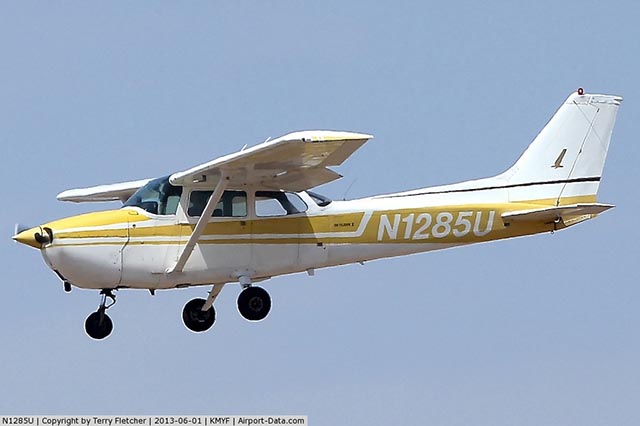 This was a fairly complicated situation, given there were so many airplanes in the same pattern. The Sabreliner (Radio call: "Eagle1") pilots would have been listening to reports of two Cessnas 172's (Radio calls: "Cessna 1285U" and "Cessna N6ZP"), a Cessna 206 (Radio call: "Stationair 5058U") and a helicopter (Radio call: "Helicopter 8360R").

Hearing the controller in a panic could be a clue that everyone on frequency needs to be extra cautious. 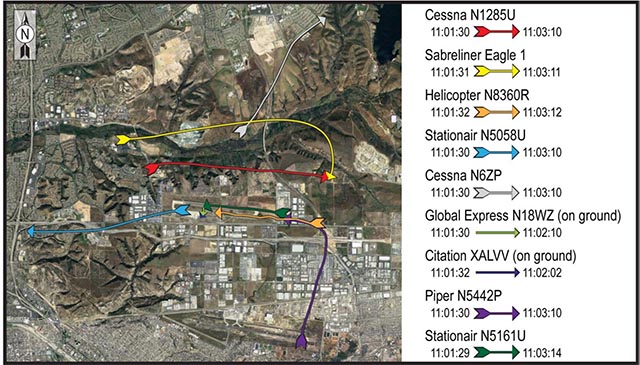 Aircraft in the SDM traffic pattern from about 1101 until the time of the accident, (NTSB Accident Docket, WPR15MA243A

At this point, the Sabreliner crew appeared to have a good awareness of the two light aircraft in their area. It may have been helpful to articulate the call sign of the aircraft that was a threat because it too was in the landing pattern.

There is no doubt the controller made a mistake, but the pilot of N6ZP could have helped things a bit by reminding the controller that he was the departing aircraft and doing a 360° turn didn't make sense. The pilots of the other two aircraft could have also spoken up had they recalled which airplanes were in the landing pattern. 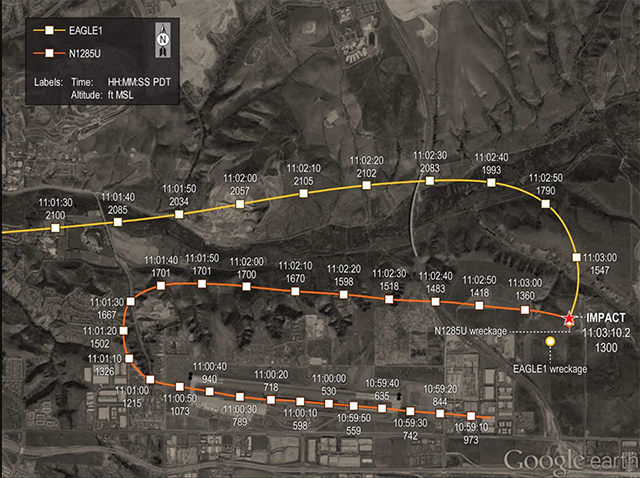 Fighter pilots often talk about "SA" in air-to-air combat as a deal breaker. If you lose situational awareness in the three-dimensional arena of air combat, you can lose it all. They also talk about the unique challenge of "DACT," dissimilar air combat training. When mixing aircraft types the dissimilar speeds and maneuverability can turn training into lethal situations. The VFR traffic pattern can be just as deadly. The Saberliner's copilot would have been hard pressed to see the Cessa seconds before impact. But had he kept "good SA" he would have realized the airplane was on a converging course. At this point another staple of "DACT" would have been useful, and that is a "knock it off" call. If you are about to turn and descend for you base turn, you should be certain the airspace is yours.

Most aircraft that are not built for air combat will have vision obscurations making "target acquisition" difficult. Many jets have small windows, further complicating the problem. High wing aircraft, like the Cessna 172, have a unique challenge when sharing the traffic pattern with jets, typically flying 500' above them. Conflicting traffic can be obscured by the wing. There are two solutions. First, you need to keep a three-dimensional view of the pattern and any conflicting traffic. You may lose sight of an aircraft but you should visualize where that airplane will be as time progresses. Second, you need to move your head. The fighter pilot reminds us to "keep your head on a swivel" when looking for your "bogie." Do that, but don't forget to look around those posts too.

The National Transportation Safety Board determines the probable cause(s) of this accident to be: The local controller's (LC) failure to properly identify the aircraft in the pattern and to ensure control instructions provided to the intended Cessna on downwind were being performed before turning Eagle1 into its path for landing. Contributing to the LC's actions was his incomplete situational awareness when he took over communications from the LC trainee due to the high workload at the time of the accident. Contributing to the accident were the inherent limitations of the see-and-avoid concept, resulting in the inability of the pilots involved to take evasive action in time to avert the collision.