I was a passenger on a Southwest Airlines flight to Chicago Midway about a month before this mishap and noticed the crew elected to use idle reverse on a runway I would consider fairly short for a Boeing 737. A month after the mishap I was on another Southwest flight flying into a longer runway when the pilots elected to use full reverse. The company apparently had a philosophy change. For the better. After this accident report was released, I found out that Southwest Airlines policy during the time of the accident was for the reversers to be used immediately on all landings. I guess not all Southwest pilots got the word. As I write this, over ten years later, I still notice not all their pilots use reverse thrust for every landing. 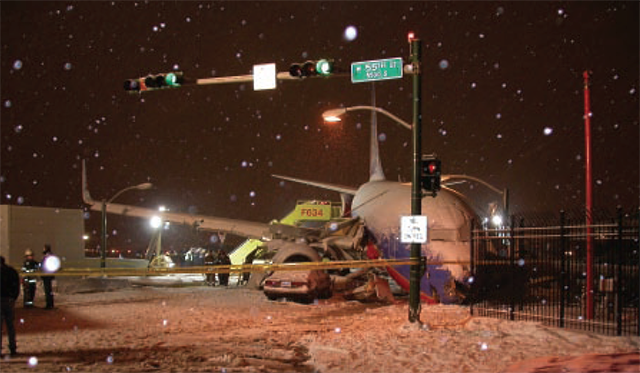 The classic debate when I was at Andrews was to use full or idle reverse. "Why ruin an otherwise good landing with all the noise and vibration from the reversers?" My view: the reversers are only effective at high speeds; you should use as much as you can as soon as you can until it is obvious you can stop without them. More on this: Smoothness.

Prompt application of the reversers might have kept this airplane on the runway, we aren't sure because there were other complications. But the pilots were also set up, in a way. They were responsible for flying other types of 737s in the Southwest fleet. Their performance computers did not take credit for the impact of thrust reversers during landing on the -300 and -500 models these pilots flew. But on the -700 model, like this one, the performance computer did take credit. It could very well be that these pilots assumed their landing performance was going to be better than predicted by the computer.

Their manual also prohibited landing with more than a 5 knot tailwind when the condition was poor and also stipulated that when the runway had multiple conditions they were to assume the worst condition for the entire runway. The crew was aware of the 5 knot limit but not of the need to consider the entire runway's braking action as poor when part of it was judged fair.

Their performance computer was designed to limit the tailwind entry to 5 knots for a poor runway condition, so the "40 feet before the departure end" prediction could be argued to be invalid.

All indications are that the airplane was landed where it needed to be at the correct speed.

There was no indication of problems with the thrust reverser levers, the first officer had no difficulty with them, or did the previous captains. The report seems to not attach any credibility to the captains statement that he tried to deploy the reversers.

I think it is quite natural to feel the aircraft isn't decelerating right after touchdown even though it is, because your inner ear can confuse movement forward and down when the down vector ceases. No matter the cause, the flight data recorder shows the airplane was decelerating almost immediately after touchdown.

However, the airplane ran off the departure end of runway 31C and continued through the runway safety area (RSA), a blast fence, a navigational aid antenna, across an airport road, through an airport perimeter fence, and onto an adjacent public roadway. The airplane struck a northbound automobile on that roadway before it came to rest near an intersection located on the northwest corner of the airport.

The OPC is a lap top computer "On Board Performance Computer."