This crew was vectored onto the approach radial 80 nm out and were cleared for the approach 44 nm out. Both pilots, apparently, did not understand the nature of this type of non-precision approach with only a final approach segment and elected to descend to their final approach altitude outside of a what the NTSB agreed was an ambiguous approach plate. Ambiguous, back then, because the pilots were trained to believe that if they were under radar control the responsibility for obstacle clearance belonged to air traffic control and that they were expected to descend to the minimum altitudes as soon as possible. Ambiguous also because air traffic control did not consider them to be under radar control and that obstacle clearance responsibility belonged to the pilot in command. 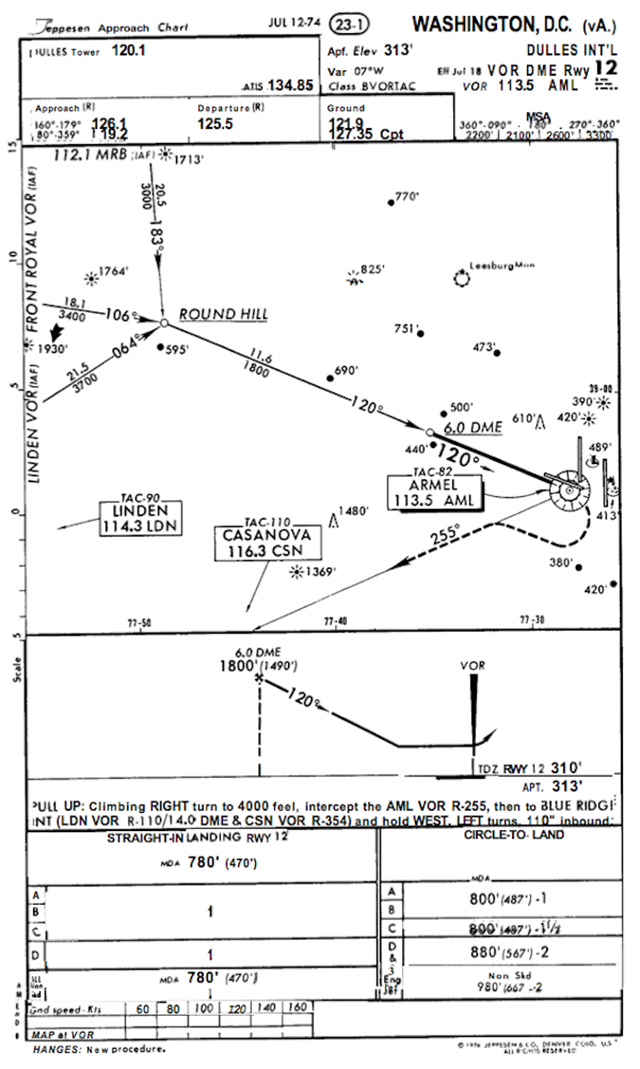 Looking at the approach plate, it seems obvious to me they descended too early. But this took place four years before my first instrument flight so perhaps I am speaking with the benefit of lessons learned from their mistake. Regardless, I still think there was a lack of situational awareness: why would an instrument approach over Virginia permit an airplane to descend to 1,800' when 44 nautical miles from the airport? The final approach fix was 6 nm from the runway, they began their descent to the final approach fix altitude over 40 nm out, and they struck a mountain about 25 nm out.

The FAA and air traffic control ended up with most of the blame for this mishap, but that doesn't help the crew. A cardinal rule of avoiding a Controlled Flight Into Terrain (CFIT) is to maintain a healthy situational awareness and that begins with at least a cursory knowledge of the topography. More about this: Situational Awareness and Controlled Flight Into Terrain (CFIT).

The pilots again discussed the VOR/DME approach At 10:55, the landing preliminary checklist was read by the flight engineer and the other crewmembers responded to the calls. A reference speed of 127 kts was calculated and set on the airspeed indicator reference pointers. The altimeters were set at 29.74. The crew then again discussed items on the instrument approach chart including the Round Hill intersection, the final approach fix, the visual approach slope indicator and runway lights, and the airport diagram. At 10:59, the captain commented that the flight was descending from 11,000 feet to 8,000 feet. He then asked the controller if there were any weather obstructions between the flight and the airport. The controller replied that he did not see any significant weather along the route. The captain replied that the crew also did not see any weather on the aircraft weather radar.

The published cockpit voice recorder transcripts begin at 11:04 so it is a mystery why the term "weather obstruction" went un-commented upon by the NTSB. They stated in the report, page 38, "The flightcrew believed that the controller would not clear them for the approach until they were clear of all obstructions." It is unclear how they know that, but the captain's actions bear it out, he started his descent to the final approach fix as soon as he received approach clearance. 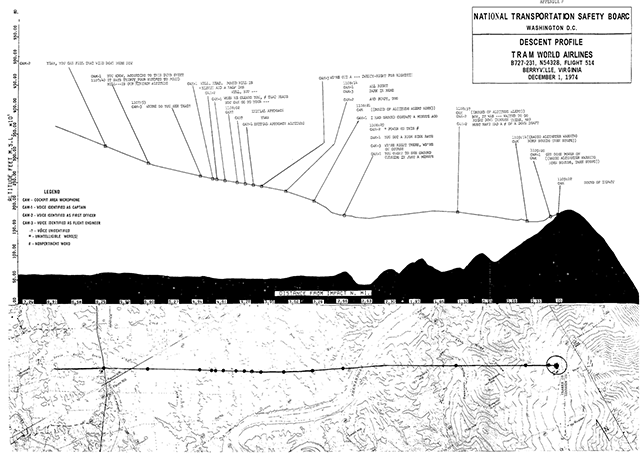 Controllers and pilots have available to them the same information regarding minimum sector altitudes within 25 miles of airports as well as minimum altitudes for various segments of an instrument approach.

While the MSA presentation on the chart back then was not as user friendly it did indicate the minimum sector altitude from their direction was 3,300' out to 25 nautical miles. Of course they were beyond that distance while being below the altitude.

This is precisely what I was taught to do as an Air Force pilot, five years after this crash.