Reading the NTSB probable cause we are told the captain failed to "exercise command authority in a timely manner to reject the takeoff or take sufficient control to continue the takeoff, which was initiated by a mistrimmed rudder." Let's translate that into plain pilot-speak. The pilot got ample clues that something was wrong before V1 and should have aborted the takeoff. The need to abort was caused by his inadequate rudder inputs, placing more strain on the nosewheel tires than they could handle, causing one of those tires to separate from the rim. But the airplane was perfectly flyable even with the failed tire and mistrimmed rudder. He was a former Air Force pilot where the mantra beaten into our heads was "first, fly the airplane." Had this pilot done that, the aircraft would not have been destroyed and the two fatalities would have made it to their destination alive. 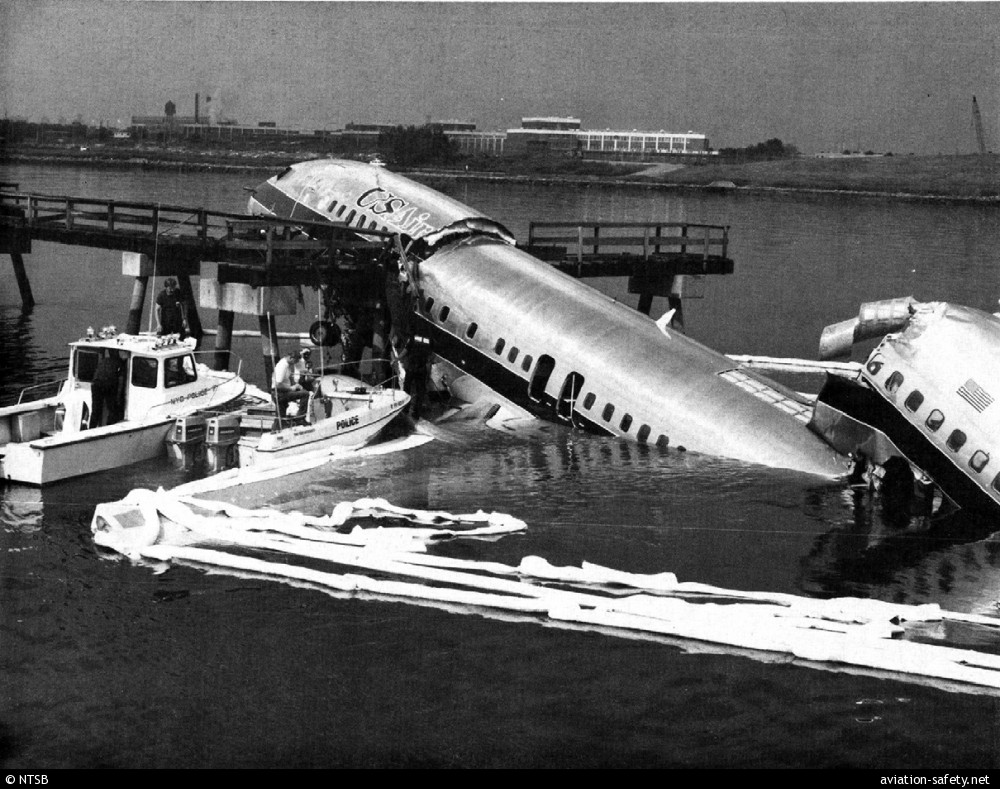 Sure, it is easy enough to say "fly the airplane," and that can become a bit trite. We pilots tend to tune these things out. But let's try saying it this way: "Don't become a passenger in the pilot's seat." The first officer, as the pilot flying during the first part of the takeoff, did not apply sufficient rudder pressure to overcome the wind and rudder trim. The captain, when aborting the takeoff, failed to apply much rudder at all to correct to centerline, or enough brake pressure to stop the airplane in the confines of the runway.

The crew had been delayed several times during the day and fatigue could have been a factor, but they were well within duty day limits. The NTSB report makes note of a few abrasive events between the captain and dispatchers, but those do not appear to be factors. A Pan Am pilot who visited the first officer in the cockpit might have bumped the rudder trim, but he denies that. In any case, while the mistrimmed rudder was a factor, it could have been easily overcome.

Pilots who make a point of articulating checklist challenges and responses exactly as given in the checklist are often accused of being too obsessed with minutiae but this mishap demonstrates the value of being detail oriented. A pilot who simply remembers this item as "stabilizer trim" can eventually forget there are more trim settings to check. The "and" in this item is crucial, especially given the fact the rudder trim on this airplane is easy to move unintentionally.

"Old school" pilots tend to mistrust "new school" technology and when autobrakes were first introduced many pilots feared they would be too aggressive when not needed. This mistrust was unfounded and had the autobrakes been used on this takeoff, the mishap may have been avoided.

The bang was one of the nosewheel tires separating from the rim and should have been a reason to abort.

There is no room for slang, jargon, or lazy terminology during the takeoff. As this mishap shows, there is too much room for interpretation that can lead to critical mistakes.

This was 5 knots above V1 but given the runway conditions the abort should have been successful. 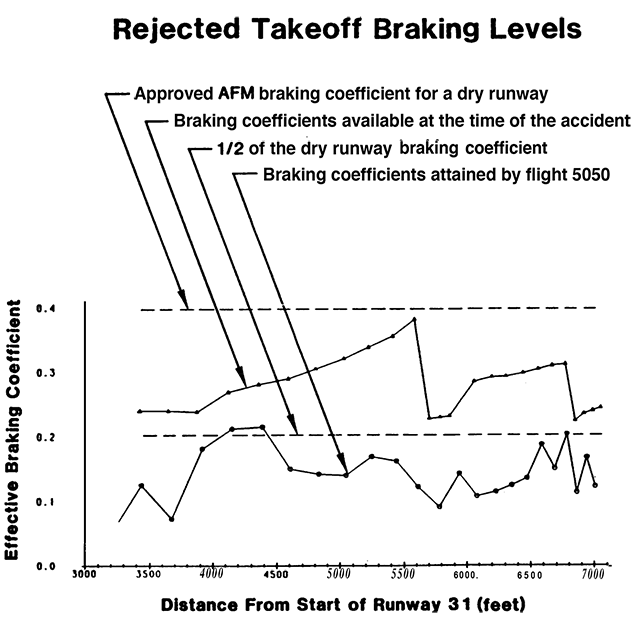 Based on runway surface characteristics, crown, and texture depth values, the drainage analysis indicates that runway 31 had excellent water drainage capability (excluding the painted nongrooved blast pad [overrun] area) particularly for the rainfall rate occurring at the time of the accident (.008in./hr.). With the transverse grooving, and the good tread condition of the main gear tires, hydroplaning was not a significant factor. Except for approximately 1,200 feet near runway 4/22 intersection, the accident aircraft RTO track was established by the white tire erasure marks found on both the asphalt and concrete deck surfaces of the runway. In terms of tire friction performance, the Saab friction tester results indicate that the lateral displacement of the aircraft left of centerline actually provided better friction performance compared to that measured closer to runway centerline. 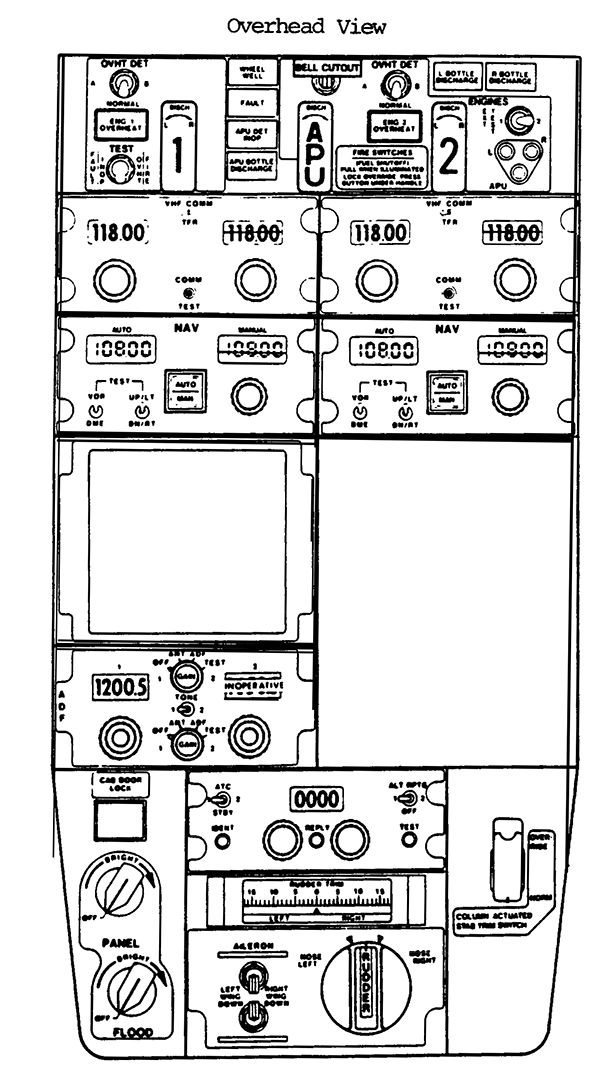 Regardless of the trim setting the pilots' force on the rudder pedals can still move the rudder to its full deflection of 26° either side of center.

The misset trim should not have been an issue. The pilot's job is to position the aircraft where it is supposed to be.

The Safety Board collected about 90 reports of rudder trim anomalies for the Boeing 737-300/400 series airplane. [ . . . ] Many reports described the inadvertent setting of rudder trim by the foot of a jumpseat occupant behind the captain's seat. The reports imply that casual visitors to the cockpit did not strap in, sat sideways and used the end of the center pedestal as a footrest for their right foot. This allowed their shoe sole to push the trim knob counterclockwise and set left rudder trim. The Pan American captain who had visited the cockpit before departure of flight 5050 said that he did not rest his foot on the center pedestal at any time. [ . . . ] Other reports show that placing objects on the center pedestal can inadvertently turn the rudder trim knob. While the Pan American captain said that he believed the first officer placed his chart holder on the pedestal during prestart activities, the first officer did not recall having done so.

Data from the DFDR showed that rudder trim on N416US was neutral after arrival at the USAir gate at LGA. The DFDR subsequently shut down. When repowered after engine start for flight 5050, the DFDR showed that the rudder had moved to the full left trim position. Electrical and hydraulic power from the Auxiliary Power Unit (APU) were available during the intervening period to change the rudder trim position, if commanded. The time to run trim from neutral to full left is about 30 seconds, so momentary knob rotation would not have produced full left trim.

We often think about VMCG (Minimum control speed - ground) as the speed where we no longer need nosewheel steering to keep the airplane on the runway following an engine failure. Another way to look at it is the speed where the rudder will do the job for us. Something we don't often think about is at what point is the nosewheel steering no longer effective on its own. But underlying it all, is the fact we should be using aerodynamic controls as soon as they are effective.

The captain was applying significant pressure on the nosewheel to turn the airplane right just as airplane's large vertical fin was pushing it in the other direction. The rudder would have been a much more effective tool.

The lackadaisical manner in which the abort was called, "Let's take it back then," seems to have carried on to the manner in which the abort was executed. The reversers, brakes, and spoiler steps are executed simultaneously. The only variation permitted is if the spoilers are not automatic, in which case they can be extended by the other pilot or a split second before the reversers. But a 5 1/2 second delay in unacceptable.

Autobrakes may have saved this crew, had they been used. The captain seemed unprepared to apply maximum braking, the electrons would not have been so unprepared.

If true, the nosewheel was not only countering the leftward wind-pushed vertical fin, but leftward rudder pressures as well.

The Safety Board views the absence of a comprehensive departure briefing, the absence of airspeed callouts, the failure of the first officer to clearly communicate his directional control problem, and the non-assertive manner in which the captain communicated his intent to reject the takeoff as indications of poor cockpit coordination. That the pilots of flight 5050 were ineffective as a team is probably the result, in part, of their lack of any formal training on cockpit resource management (CRM). Both of the flight crewmembers were hired and trained by Piedmont Airlines before the merger with USAir had been completed. Piedmont Airlines did not provide formal CRM management training to either pilot involved in this accident.