Ah: good news, bad news. First the good: you no longer need two sets of codes, one for international and one for U.S. domestic. Now the bad: those codes are so complicated you can't possibly remember them all. Okay, I can't possible remember them. But even if you can, there is an easier way. 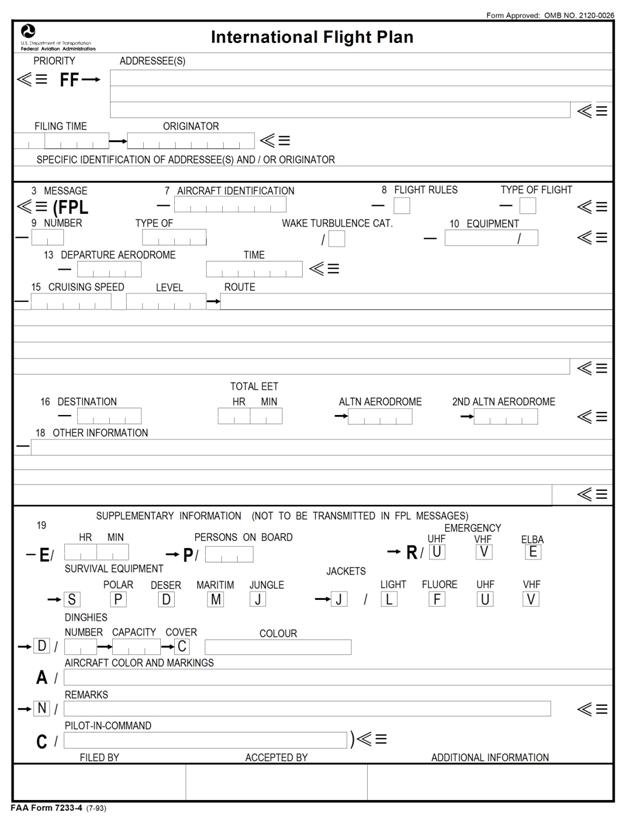 All clock times are in four figures, UTC.

All estimated elapsed times are in four figures (hours and minutes).

Area preceding Item 3 is to be completed by ATS and COM services.

If called upon to fill out an International Flight Plan you may wish to copy the filed flight plan portion of your computer flight plan as a guide.

Instructions for Items 7 through 14

7. Aircraft Identification. Normally the aircraft call sign, if used, or the registration marking of the aircraft. (i.e., “TAG5”)

9. Number of Aircraft. Leave blank for one aircraft only.

The minimum to get across the North Atlantic and into Europe is: SXWGHRY/S.

For A Gulfstream G450 with enhanced navigation (Certification F-Enhanced): SBDE2E3FGHIJ3J5M1RWXYZ/HB1D1

The four letter location identifier of the departure airport, or “ZZZZ” if no identifier (then specify airport in Item 18 with “DEP/” followed by name).

Instructions for Items 15 through 19

Route. Flights along designated ATS routes. Insert the route designator if the departure airport is located on the route, otherwise insert “DCT” followed by the point of joining the first ATS route, followed by the designator of the route. Then, insert each point at which either a change of speed or level, a change of ATS route, and/or a change of flight rules is planned. Followed in each case by the designator of the next route segment, even if same as the previous one, or by “DCT” if the next point will be outside a designated route, unless both points are specified by geographic coordinates.

Flights outside designated ATS routes. Insert points normally not more than 30 minutes flying time or 200 nm apart, including each point at which a change of speed or level, a change of track, or a change of flight rules is planned. Insert “DCT” between successive points unless both points are defined by geographic coordinates or by bearing and distance.

Change of speed or level (maximum 21 characters). The point at which a change of speed (5% TAS or 0.01 Mach or more) or a change of level is planned will be followed by an oblique stroke and both the cruising speed and cruising level without a space. I.e., “DUB180040/M082F330”.

16. Destination Aerodrome. The four letter ICAO location identifier or “ZZZZ” if no identifier (then specify airport in Item 18 with “DEST/” followed by name).

Alternate Aerodrome. The four letter ICAO location identifier or “ZZZZ” if no identifier (then specify airport in Item 18 with “ALTN/” followed by name).

18. Other Information. As necessary.

For A Gulfstream G450 with advanced NAV: RNVD1E2A1

This used to specify the following, but the requirement has since been deprecated.

For A Gulfstream G450 with advanced NAV the answer had been: DAT/SV, but that has since been deprecated. (You don't need it anymore.)

The Gulfstream manuals say to add "RMK/AGCS EQUIPPED" here but you should not do that in a G450/G550 because it will prevent your "Acknowledge" reply.

For more about this see: CPDLC / Oceanc CLX.

The U.S. FAA provides a two-page quick guide for the proper ICAO Flight Plan Codes. It is very good but its location on the faa.gov website tends to move around. (As of this writing it is nowhere to be found.) The codes have been changing almost every year for about ten years now. The ICAO promises to knock that off and it appears they have kept to that promise for the last year: 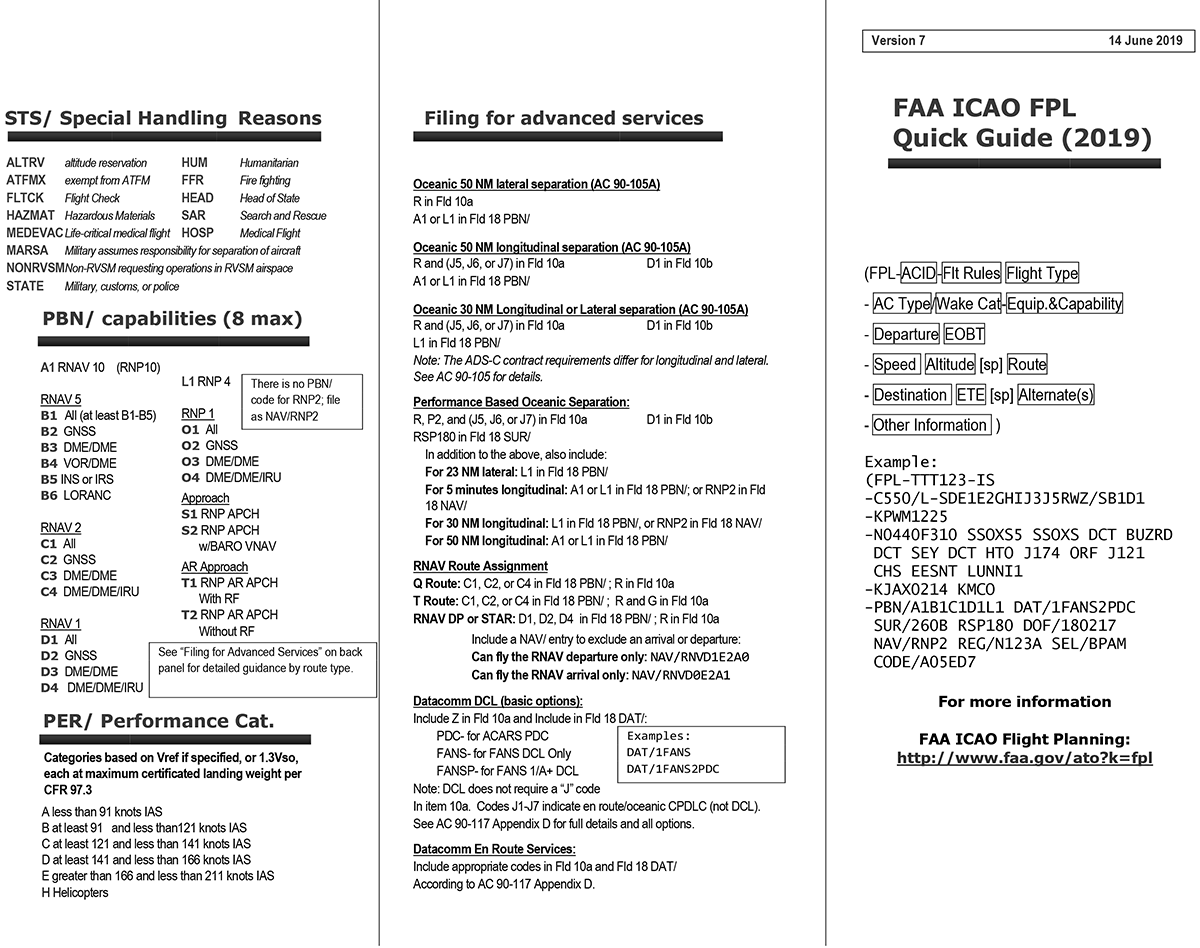 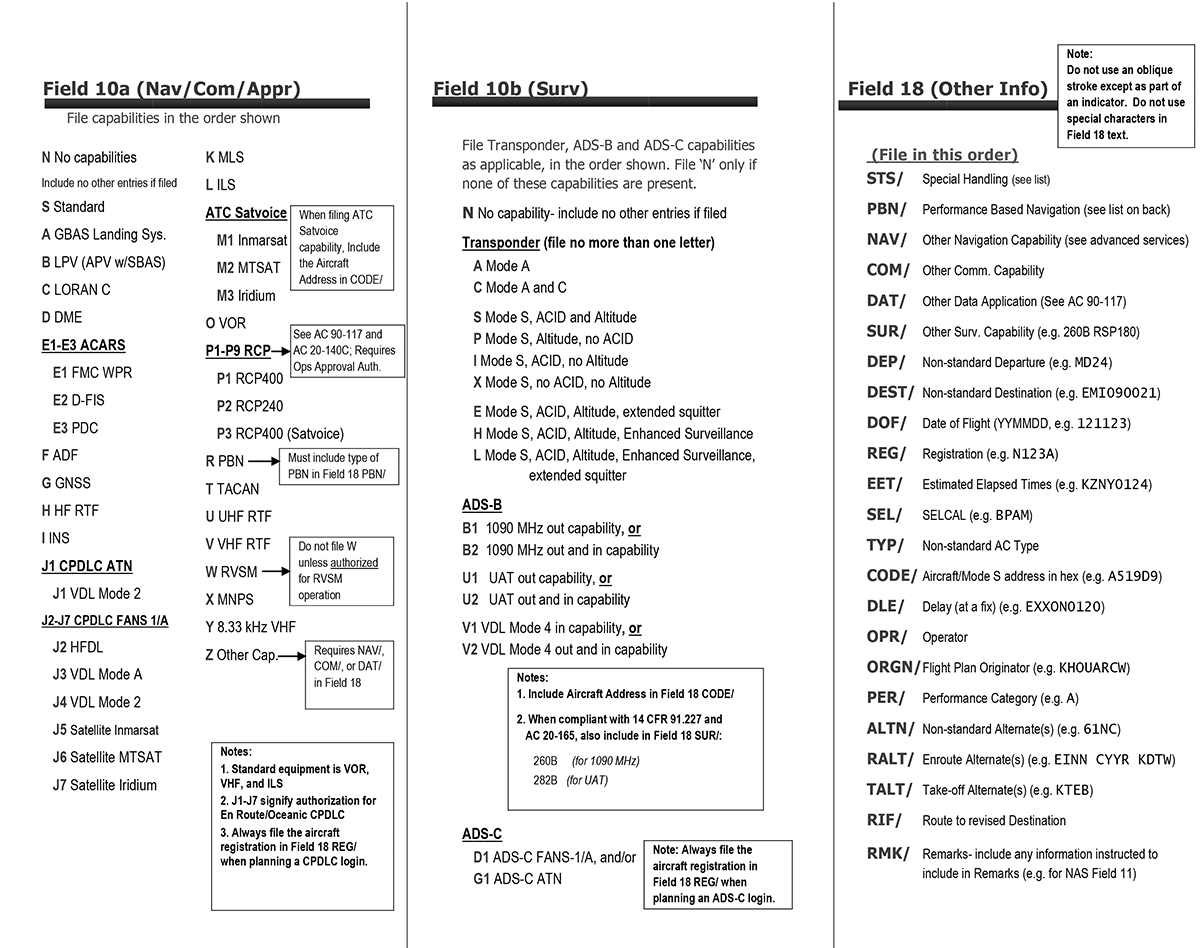 The first time I ever filed an ICAO flight plan was in 1982 for a Boeing 707 (Air Force EC-135J) flying from Hawaii to Japan. As I recall, Block 10 of the filing string was five characters long, including an "S" for standard equipment, and four extra characters for our HF, VLF, INS, and TACAN. Our Block 18 only contained our Estimated Enroute Times (EETs) and a note about our diplomatic status. I had the Block 10 codes, all five of them, memorized. Fast forward to today and here is the Block 10 for a fully equipped Gulfstream GVII-G500:

Besides the EETs and company specific notes, our Block 18 is:

Even after going through the pain of getting our LOAs for all this stuff, I still don't recognize most of these codes. Fortunately, Ed Lemelin has done the work for us. You can reach him by clicking on the top right link in the following spreadsheet.

The spreadsheet comes directly from him. You can check the source material given in the References given below.

Start by double-clicking the orange cell, then paste in your filing string.

This tool is designed to help find errors in your ICAO filing strip and to show OPSPEC/LOA requirements as we understand them as of July 2020. It is your responsibility to verify the accuracy of any information presented here. Always double check your filing strip to ensure you're actually filed for what you think you're filed for.