I've never noticed a laser beam aimed my way in an airplane but understand it is quite a problem. Some of my friends in the airlines say it is an over-hyped issue while others say it is only a matter of time before a pilot is injured permanently and an airplane is put into jeopardy.

This from a friend near Denver: Denver 9 News. Here is what I have learned so far

4 — Should you seek medical attention?

(a) OFFENSE -- Whoever knowingly aims the beam of a laser pointer at an aircraft in the special aircraft jurisdiction of the United States, or at the flight path of such an aircraft, shall be fined under this title or imprisoned not more than 5 years, or both.

(b) LASER POINTER DEFINED -- As used in this section, the term `laser pointer' means any device designed or used to amplify electromagnetic radiation by stimulated emission that emits a beam designed to be used by the operator as a pointer or highlighter to indicate, mark, or identify a specific position, place, item, or object.

(c) EXCEPTIONS -- This section does not prohibit aiming a beam of a laser pointer at an aircraft, or the flight path of such an aircraft, by--

(2) members or elements of the Department of Defense or Department of Homeland Security acting in an official capacity for the purpose of research, development, operations, testing or training; or

(3) by an individual using a laser emergency signaling device to send an emergency distress signal.

(d) The Attorney General, in consultation with the Secretary of Transportation, may provide by regulation, after public notice and comment, such additional exceptions to this section, as may be necessary and appropriate. The Attorney General shall provide written notification of any proposed regulations under this section to the Committees on the Judiciary of the House and Senate, the Committee on Transportation and Infrastructure in the House, and the Committee on Commerce, Science and Transportation in the Senate not less than 90 days before such regulations become final.

Don't panic? Easy for me to say. Your need your eyes to make a living after all!

It is extremely unlikely that a laser beam exposure will result in permanent eye damage. Eye discomfort and irritation during the exposure is common and rubbing your eye can result in an abrasion that may be painful. If you have experienced one or more of the following after a laser beam exposure please consult an eye specialist: Eye problems – swelling, pain, itching, watering, discharge, dryness or redness of the eye. Visual disturbance – blurring, black spot, trouble reading, loss of peripheral vision, floaters, halos, poor night vision, sensitivity to light. These symptoms may not appear until hours after the incident and may not be related directly to laser exposure but could reflect other eye issues perhaps not previously noticed.

There are many who will dispute the claim that permanent eye injuries "appear to be non-existent." See: Denver 9 News for one example of many.

Although unauthorized laser illumination is difficult to predict there are certain practical actions aircrews should consider before, during, and after encountering laser activity.

See Reporting, below, for more on this.

Should you seek medical attention?

If you think you've had a laser shot to your eyes you might need medical attention. The UK CAA has a self assessment to help you decide if you should seek medical help. Click on the grid for a copy of the self-assessment. 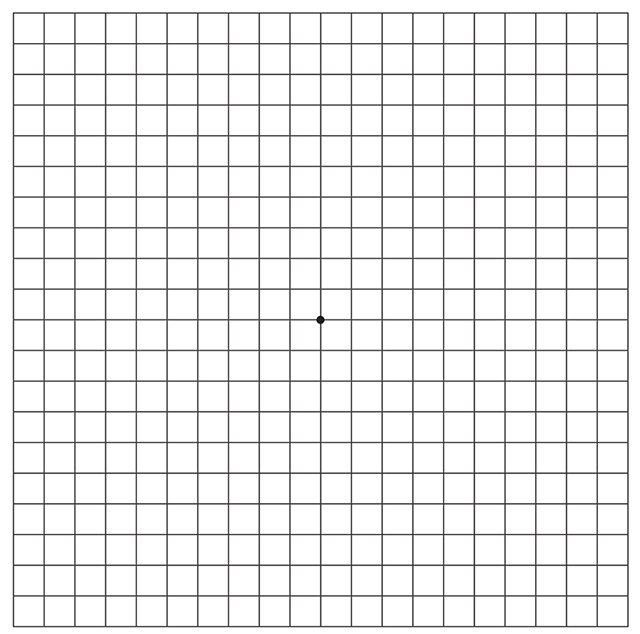 If there has been a reported laser illumination in an ATC facilities area within the previous 20 minutes, they are required to let you know.

If the laser event occurs in the vicinity of an FAA ATC terminal facility, ATC will broadcast on appropriate control frequencies a general caution about reported incidents of unauthorized laser illumination of aircraft. These cautions will be broadcast every 5 minutes for 20 minutes (four times) after each reported event. Cautionary broadcasts will include the following:

The U.S. FAA tracks laser incidents. Click on the photo to be taken to their tracking form. 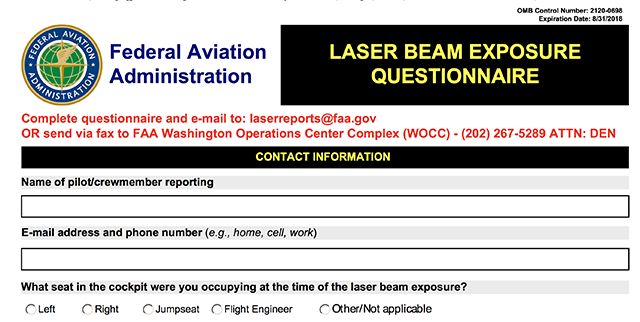