Theoretically, a lightning strike should enter one part of the airplane and exit from another with very little damage to the airplane. Theoretically. I've had this happen twice where theory didn't measure up to reality. 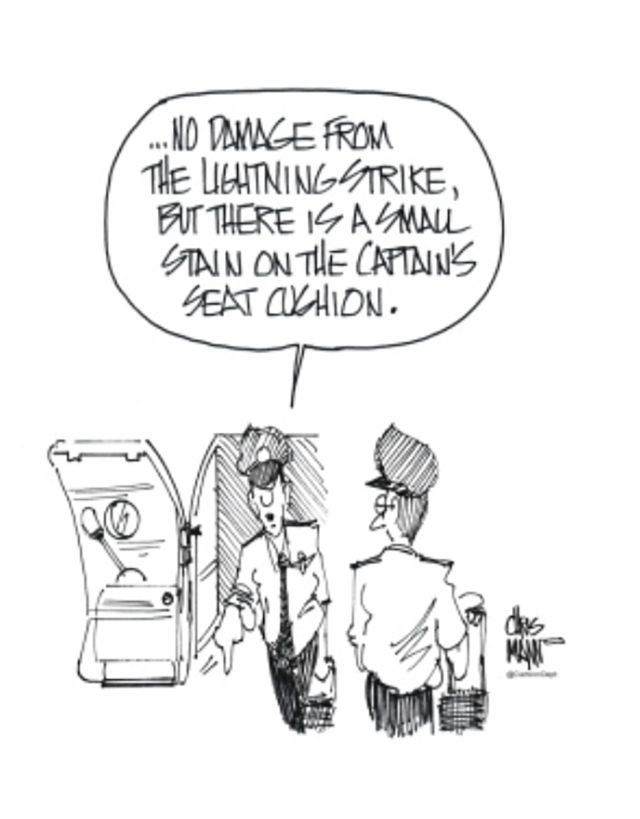 The first time was in a Boeing 707 (EC-135J) where the strike knocked all our generators off line and we ended up flying by reference to a back up system on the copilot's side. The second time was in a Boeing 747 (E-4B) where we seemed to lose half of everything and the exit point blew out about five square feet of horizontal stabilizer. I've come to the conclusion that both strikes were a result of us flying where we shouldn't be. (But we did a lot of that in the Air Force.) So try not to fly where lightning is likely.

1 — Anatomy of a lightning stroke

Anatomy of a lighting stroke 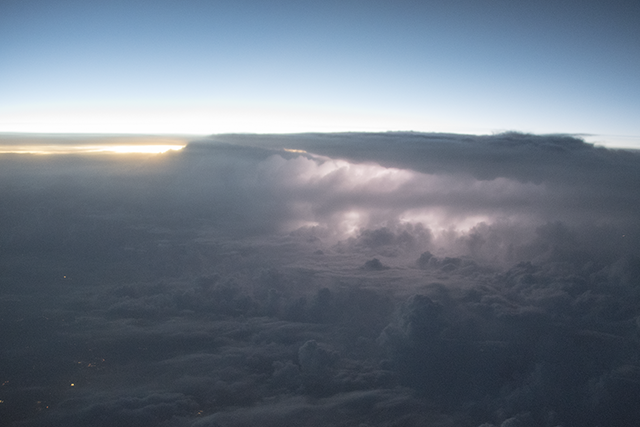 Although a lightning stroke can be displayed in infinite ways, they all have the same formative process. This process starts with positive and negative charges building up in different places—either within a cloud, between 2 clouds, or between a cloud and the ground. Don't worry, though—your aircraft is incapable of building a sufficient charge to trigger a lightning stoke.

When the electrical difference between the positive and negative charges becomes great enough, the negatively-charged electrons become attracted to the positively-charged regions and start to flow toward them. The trail blazed by the electrons, commonly from the base of the cloud toward the ground, is known as a stepped leader. It is stepped because the electrons surge about 50 meters at a time, pausing for about 50 microseconds before surging the next 50 meters.

On the other end, as the stepped leader approaches, positive ions are drawn toward it. When the 2 channels connect, the circuit is established and the positive charge flows quickly up the ion channel towards the cloud. The speed at which the return stroke moves up the channel is about 1/3 the speed of light, which often makes the motion of longer flashes visible to the eye.

The light in lightning is due to the current heating the air molecules to about 50,000 °F.

For a lightning stroke to happen requires a potential of around 3 billion volts per kilometer. This means that for a cloud base 1 km from the ground, 3 billion volts of charge difference is necessary for cloud-to-ground lightning discharge to occur.

Because the huge potential is discharged almost instantaneously, the current is incredible. A typical lightning stroke discharges at a current of around 2,000 - 40,000 Amps. 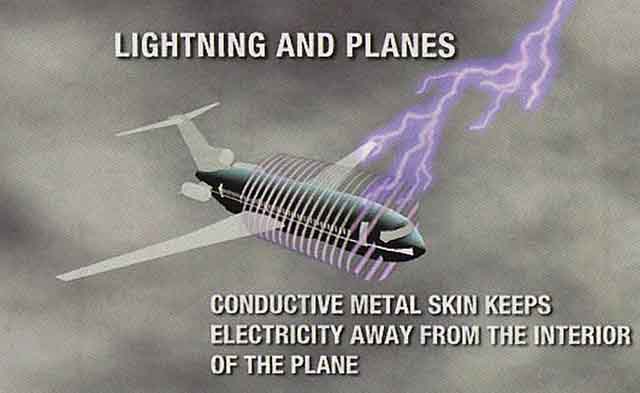 It is unlikely an aircraft can generate a positive or negative charge large enough to generate a lightning bolt. Instead, an aircraft simply acts as a path of least resistance as it flies between 2 polarized regions of clouds. A nearby stepped leader will pass through an aircraft since it will be more conductive than a nearby path of empty air.

When lighting does pass through an aircraft, it will generally begin by attaching to an extremity, such as a wing tip, nacelle or antenna. The path will then migrate aft as the aircraft moves forward, attaching to other spots until charge has been neutralized. Where the lightning strikes the aircraft, the intense heat may scorch the skin or even burn a small hole. Lightning channels are at most around 4 inches in diameter. Aircraft with conductive skins, such as aluminum, tend to fare better with lightning strikes than those without. Modern aircraft with fiber composites skins generally incorporate a thin layer of conductive material into the skin.

While an aircraft's skin and frame will serve to channel the energy from a lightning strike away from occupants and critical internal systems, there remain a few places that are susceptible to damage. External antennae as well as radar and antennae housed behind nonconductive nacelles or radomes are susceptible.

Lightning can disorient or temporarily blind the pilot. At low altitudes, such as during takeoff or landing, this debilitation could prove disastrous.

Above all, remember this: never regard any thunderstorm “lightly” even when radar observers report the echoes are of light intensity. Avoiding thunderstorms is the best policy. Following are some Do’s and Don’ts of thunderstorm avoidance:

If you cannot avoid penetrating a thunderstorm, following are some Do’s before entering the storm:

Following are some Do’s and Don’ts during the thunderstorm penetration: 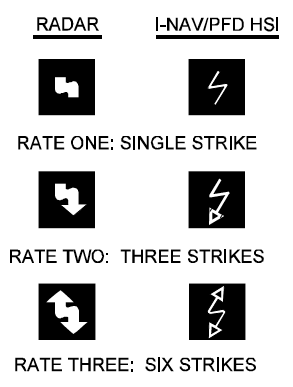 The G-450 Lightning Sensor System (LSS) is an antenna located at the top of the vertical stabilizer to detect the electromagnetic energy released during lightning strikes within a two hundred (200) mile range of the aircraft. The system is capable of tracking up to fifty (50) areas of lightning activity simultaneously. A system processor determines the range and bearing of the lightning energy pulse and forwards the information to the MAUs for formatting and display on the active radar presentation(s).

The display criteria is a function of frequency of lightning strikes within a two (2) minute period for a given area. A medium intensity icon is displayed if three to five (3 - 5) strikes occur in the same vicinity within two (2) minutes, and an area that suffers six (6) or more lightning strikes within two (2) minutes is marked by the intense lightning icon. The initial icon display for a given area will change if the rate of lighting activity within the monitored time period changes - i.e. if an area of intense activity decreases to a level of four (4) strikes per two (2) minute period, the icon will change to the medium activity format.