One of my earliest aerodynamic engineering texts, Airplane Aerodynamics, written in 1951, worries about spins thusly: "unless care is taken in design, the wing tips may stall first, with a resultant flow separation over the ailerons, making them ineffective in controlling roll." [page 295] Of course the speed, maneuverability, and fuel advantages inherent in a highly swept wing has overruled this early concern. Most of our wings do indeed stall at the wing tips first, so our focus has turned to preventing a stall which, in turn, will prevent a spin. 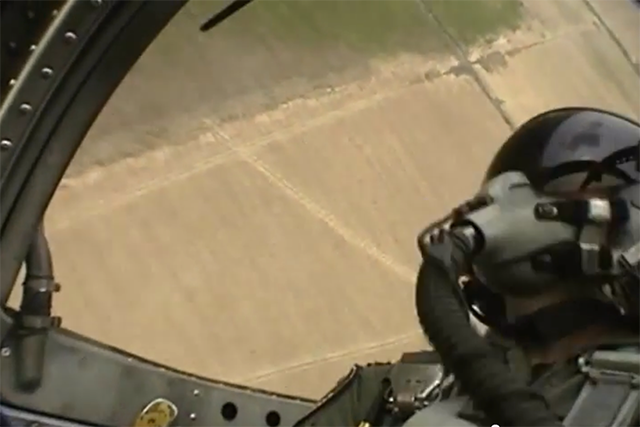 Do you need to know how to recover from a spin? Unless you are in an aircraft designed to spin, the answer is no. Just don't stall the airplane and if you do stall an airplane, don't yaw it. But if you would like to know more about it, read on. How I learned all this: Single Spin Recovery.

For an excellent take on spins from an engineer friend of mine: A "new spin" on spins, www.engineeringpilot.com.

1 — Aerodynamic characteristics of a spin

Aerodynamic characteristics of a spin 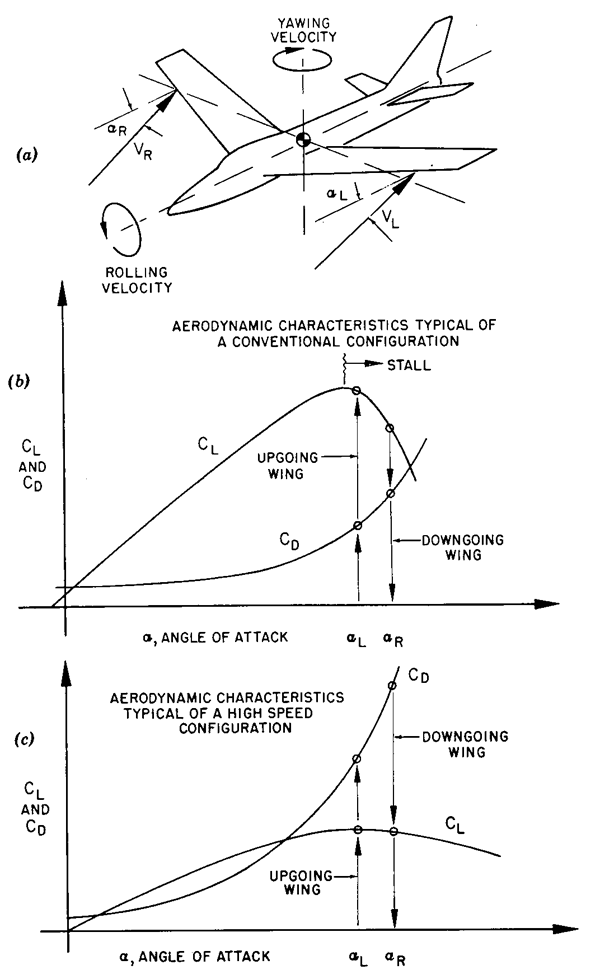 The principal aerodynamic effects of an aircraft entering a spin can be visualized by referring to [the figure (a)]. If an airplane is yawed to the right, higher local velocity will exist on the left wing than on the right wing. If the airplane is rolled to the right, the right will wing will have a higher AOA than the left wing. If the aircraft is operating at an AOA that is below CL(max), the yawing motion will produce a bank to the right. The rolling motion will result in a damping of the roll rate. However, if the aircraft is at an AOA equal, or greater, than for CL(max), important aerodynamic changes takes place. These changes are different for straight wing, high aspect ratio aircraft and for swept wing, low aspect ratio aircraft.

Generally speaking, you need to stall the wing before the aircraft will spin.

The straight wing aircraft has CL and CD curves as shown in [the figure (b)]. If this type of aircraft is flying at some AOA above the stall, and the aircraft is rolled to the right (right wing drops), the right wing experiences a higher local AOA and becomes even more stalled. The left wing, on the other hand, moves upward and operates at a lower AOA and becomes less stalled. The rolling motion of the aircraft is aided by the relative increase in lift of the left wing, and a yawing moment is produced to the right. These moments result in autorotation. This means that the aircraft will continue to roll and yaw without any input from the pilot. In addition to the aerodynamic forces acting on the aircraft, there are also inertia and gyroscopic effects that complicate the problem.

The attitude isn't necessarily 40° nose down and steady at that. The T-37, for example, will oscillate to higher extremes nose up and down.

The swept wing aircraft has CL and CD curves as shown in [the figure (c)]. Note that the CL curve does not have a well-defined maximum lift point. When this type of aircraft is rolled at high angles of attack, only small changes in CL take place. There is no definite stall, and the wing autorotation contribution will be quite weak. The change in CD that occurs between the two wings, however, is substantial, and a strong yawing moment is developed.

Modern, low aspect ratio, swept wing aircraft have the mass of the aircraft distributed along the longitudinal axis of the plane rather than in the wings. As the yaw develops, during the spin, this mass contributes to the inertial moments and tends to flatten the spin. This results in extremely high angles of attack and high sink rates. The above explanation is extremely simplified. Each part of the airplane affects prospin or antispin characteristics separately. Each model of the airplane spins differently, and each will spin differently as the configuration of the aircraft is changed. The pilot must be familiar with the spin characteristics of the aircraft as described in the flight handbook.

Modern transport category aircraft do not require spin flight certification: don't stall the aircraft and you won't be in danger of a spin. The primary audience of this book was pilots flying fighter aircraft in the seventies and eighties. I suspect even modern fighter aircraft would not be routinely spun.

The most effective spin recovery technique for straight wing aircraft is to stop the spin rotation by use of opposite rudder and to lower the AOA with forward stick. Care must be used during pullout from the resulting dive to prevent an accelerated stall, which could result in an entry into another spin.

We called this a "spin prevent" in the T-37. If autorotation hasn't started, you can simply "fly the airplane out of the spin." The key in the T-37 was to do this smoothly, so as not to wrap the airplane into another spin in the other direction, often inverted.

In addition to the control positions described for straight wing aircraft, the ailerons are often used for swept wing recovery. If ailerons are used into the direction of rotation, they create more drag on the outer wing (left wing for a right spin) than on the inner wing. The resulting "adverse yaw" will help stop the rotation. Of course, rudder is used against the spin as was done for the straight wing aircraft. The elevator may be held in the full back stick position. This will help move the mass of the aircraft away from the spin axis and slow the rate of rotation. Back stick may also increase the effectiveness of the tail. Again, consult the flight manual for proper spin recovery procedures for your aircraft.

The following procedure is recommended for a normal spin recovery:

If you keep your aircraft out of a stall you should never need a spin recovery. If you find yourself in a spin with an Air Force pilot who grew up in the T-37, transfer aircraft control and watch the following, which was beaten into memory: