I've had a few jobs where one of my primary duties was to teach others how to fly internationally. I liked to end the training with this: "The art of international operations includes the science of knowing how to pickup the pieces when they fall." And they will fall!

Of course the intent of that saying covers the small things, like a missed slot time, as well as the big, an engine failure at 30 West. So let's cover those big things here.

Of course we spend every aircraft recurrent talking about many of these things. We also devote a fair amount of time at international procedures courses on many of the same topics. The problem is that the theory for the first set of courses doesn't work well with the theory from the second. And in both cases, you can argue that either theory falls short of reality. You can fix this problem, but you have to know where the problem lies before you can fix anything.

6 — Improving your odds before you leave the ground 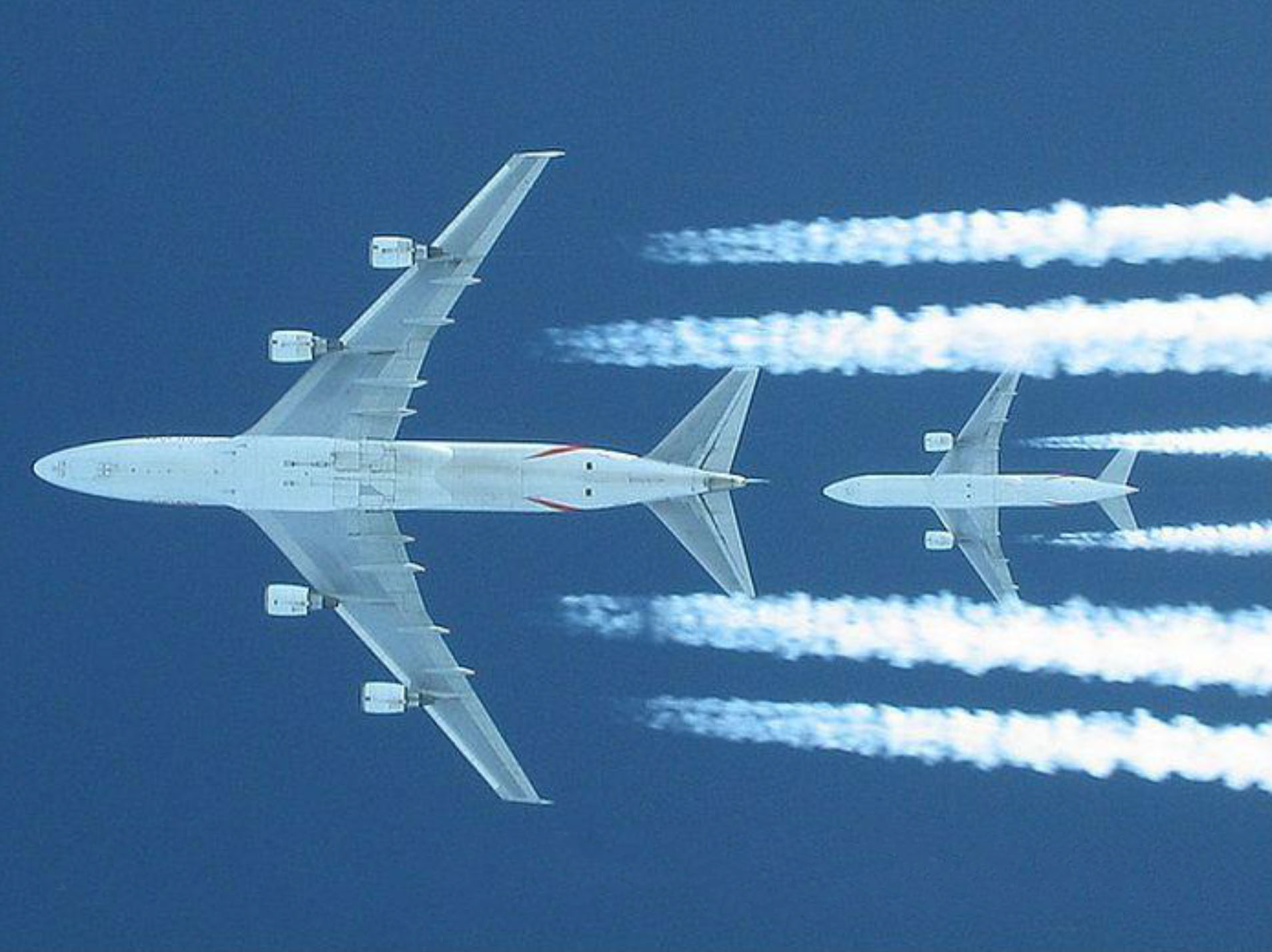 Stacked aircraft (From a presentation at the 2018 NBAA IOC)

In most parts of the world, an oceanic track is designed to keep you separated from aircraft on adjacent tracks. You cannot turn off the track without considering the possibility of a midair collision first. With or without adjacent tracks, no matter where in the world you are, you need to have an idea where the nearest suitable alternate is at all times. 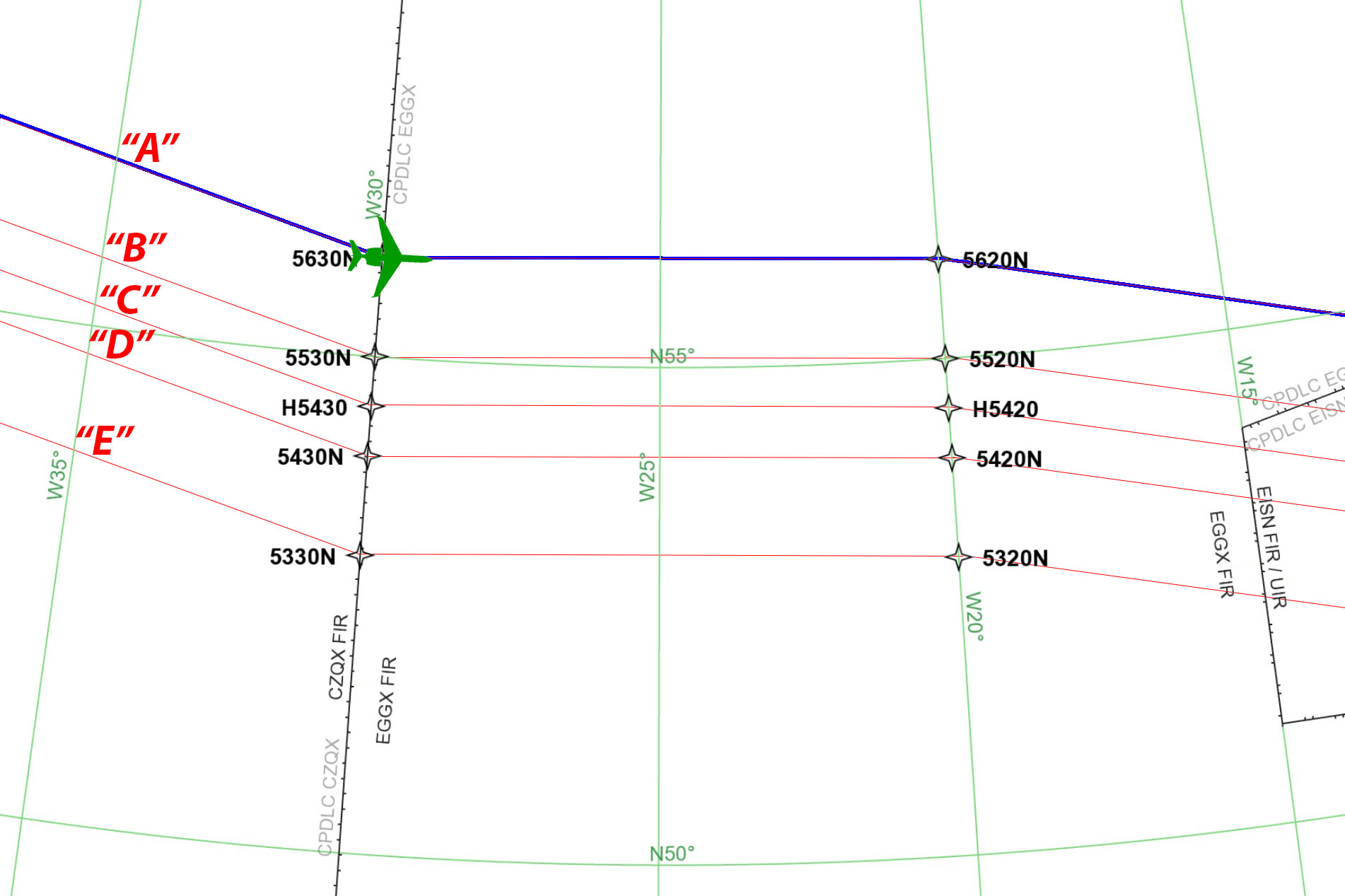 A random route above the North Atlantic Track System

Let's say you are flying to Europe either on or above the northernmost North Atlantic Track when an engine quits just as you pass 56°North 030° West. You need to descend and your best option is to head to Shannon, Ireland (EINN).

The aircraft manufacturer should have evaluated your aircraft's performance and figured out the best way to squeeze the most distance for the least amount of gas in the event of an engine failure. They will have made similar computations for a depressurization scenario and for a simple diversion while remaining at altitude.

At the very least you should have made computations to figure at what point along your route of flight you can make the decision to continue or return to a set of alternate airports in front or behind you. This point is the Equal Time Point (ETP) and is a staple of international operations. Your flight planning service very likely makes these computations for you. But what are the assumptions behind the numbers?

Your ETP is probably designed for you to do the following:

This gets you to your ETP alternate at the predicted fuel level, provided the winds, temperature, and other considerations cooperate. In other words, it is a best case scenario. But what is the route of flight for this diversion?

Many pilots assume that when they approach an Equal Time Point (ETP), they will have smooth sailing getting to either ETP airport. It is a safety factor, after all. But they may be surprised to hear that most ETP calculations assume a straight line route of flight and do not provide for approach fuel or any additional fuel needed for the approach or APU.

Yup, the ETP is based on a straight line. In a G450 at common weights, for example, the cruise speed of 0.80 Mach is identical to your drift down speed, it will take you 38 minutes and 254 nautical miles to descend to your drift down altitude of 29,000 feet. Unfortunately this means crossing two tracks to your south. 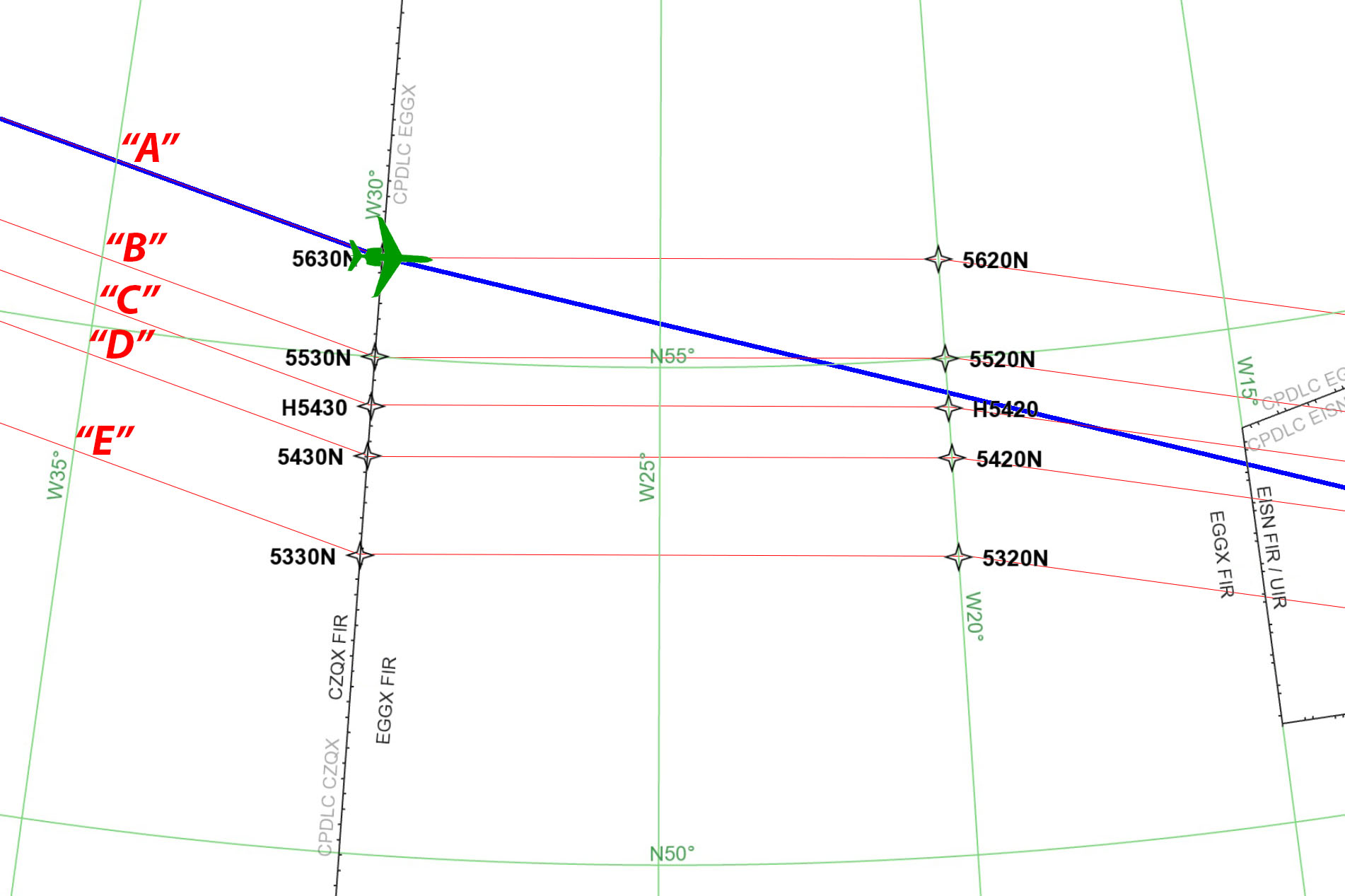 Turning direct to the alternate, descending through an adjacent track,

In our example, that would mean a twin-engine turned single-engine Gulfstream would turn right off Track "A" and would end up crossing Track "B" about 100 nm west of 020° west. The descent is begun immediately, possibly encroaching on lower traffic on Track "A" and probably also those on Track "B" using the expected descent rate. Because the center tracks are now spaced at half a degree latitude, our descent may actually cross a third track before reach an altitude below the tracks. The crew can expect to make it to Shannon with the amount of fuel promised by their ETP calculations, provided they avoid hitting anyone. 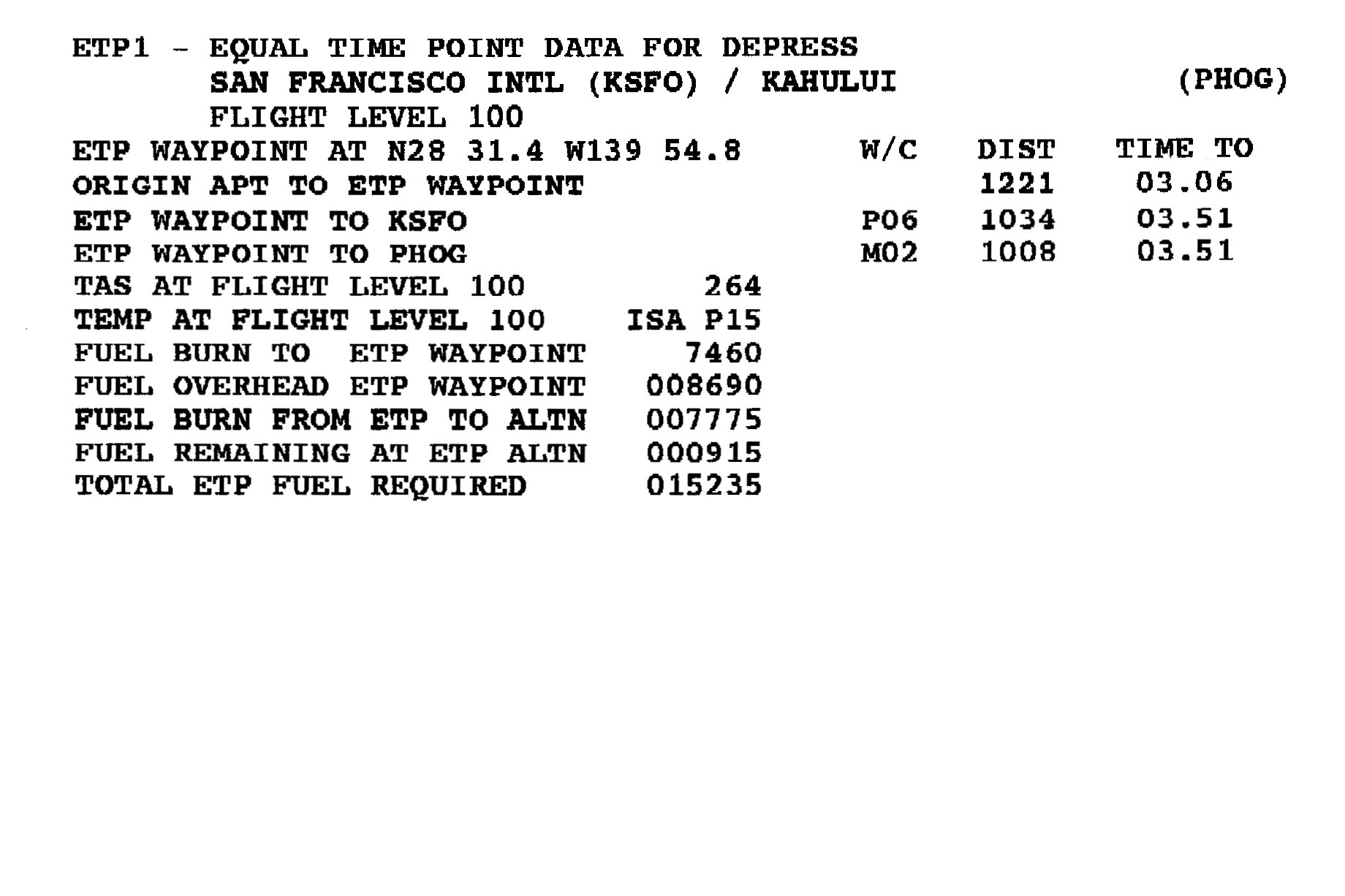 Fuel remaining in a CL601 flying from California to Hawaii

You may argue that it just doesn't matter, since you normally carry enough gas for every situation. That is true for some situations but not all. In the example above, a Challenger 601 can make Santa Ana, California to Kona, Hawaii without too much trouble. But if they were to lose cabin pressurization at their KSFO - PHOG Equal Time Point, they could find themselves on final with just enough gas for one approach.

What about an "ultra long range" aircraft like a GV? I once flew a GV from Wilmington, Delaware to Kona, Hawaii and landed with enough gas to make California without refueling. But a GV from Paris to Los Angeles can find itself with similarly paltry amounts of fuel flying over desolate regions of Canada. The critical lesson here is that you cannot assume you are going to be okay at an ETP alternate just because you will have lots of gas when you land at your planned destination.

The ICAO cleaned up the disparate procedures for oceanic contingencies nicely about 2007, then again early 2020, and now once again November 5, 2020. So what follows below are:

The old "Quad Four" maneuver to turn 45° away from track, offset 15 NM, pick an altitude, etc. is gone. With the exception of lost communications timing in the Pacific, almost all of the world is on a single oceanic contingency procedure. Now you diverge from the route by 30°, offset by 5 NM, and then descend below FL290 or climb above FL410.

Of course there may be regional differences that supersede these procedures and you should use your judgment to ensure safety. If you can communicate with ATC via voice or CPDLC, your options might expand.

For more about what the ICAO wants you to do, see: Oceanic Contingencies.

It would seem to be a conundrum:

What's a pilot to do?

Every situation is different but you need to come up with a way to minimize risk while maximizing survivability. Here is a possible solution for our example scenario. It is up to you to come up with an escape plan for each of your oceanic route segments. 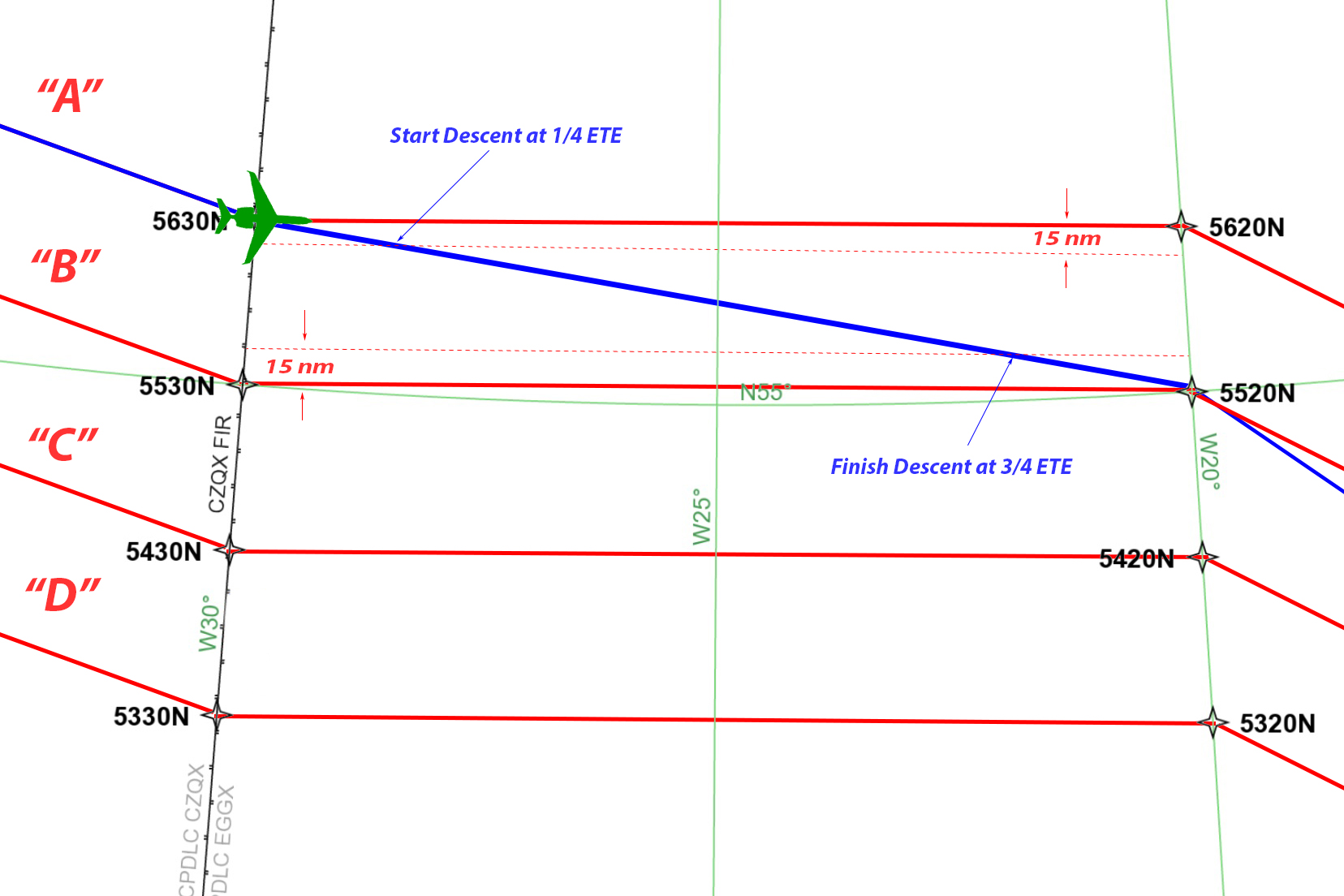 While each situation is different, looking at the big picture you can come up with a plan to maximize the use of "safe zones" between tracks. In our example:

This method isn't as efficient as the AFM procedure but offers greater assurance of not encroaching on another aircraft's airspace. This method will, however, get us to the alternate with more gas than the purely Quad Four maneuver. Each situation is different, this should provide an example of the type of "heads up" thinking that will serve you well.

Depending on your aircraft, the time between an engine failure and needing to start down can be only seconds. Many twin-engine aircraft cruise right at their drift down speeds (such as a Gulfstream G450). Others give you more time (like a Challenger 605). Aircraft with three or more engines can give you 20 or 30 minutes (such as a Falcon 900). But no matter the amount of time you have, you should know what to do before it happens. A good time to think about this is at each waypoint. As your geography (distance along the route), performance (reduce weight), and endurance (reduced fuel) change, your situation changes. You need to brief a new escape plan at every waypoint. 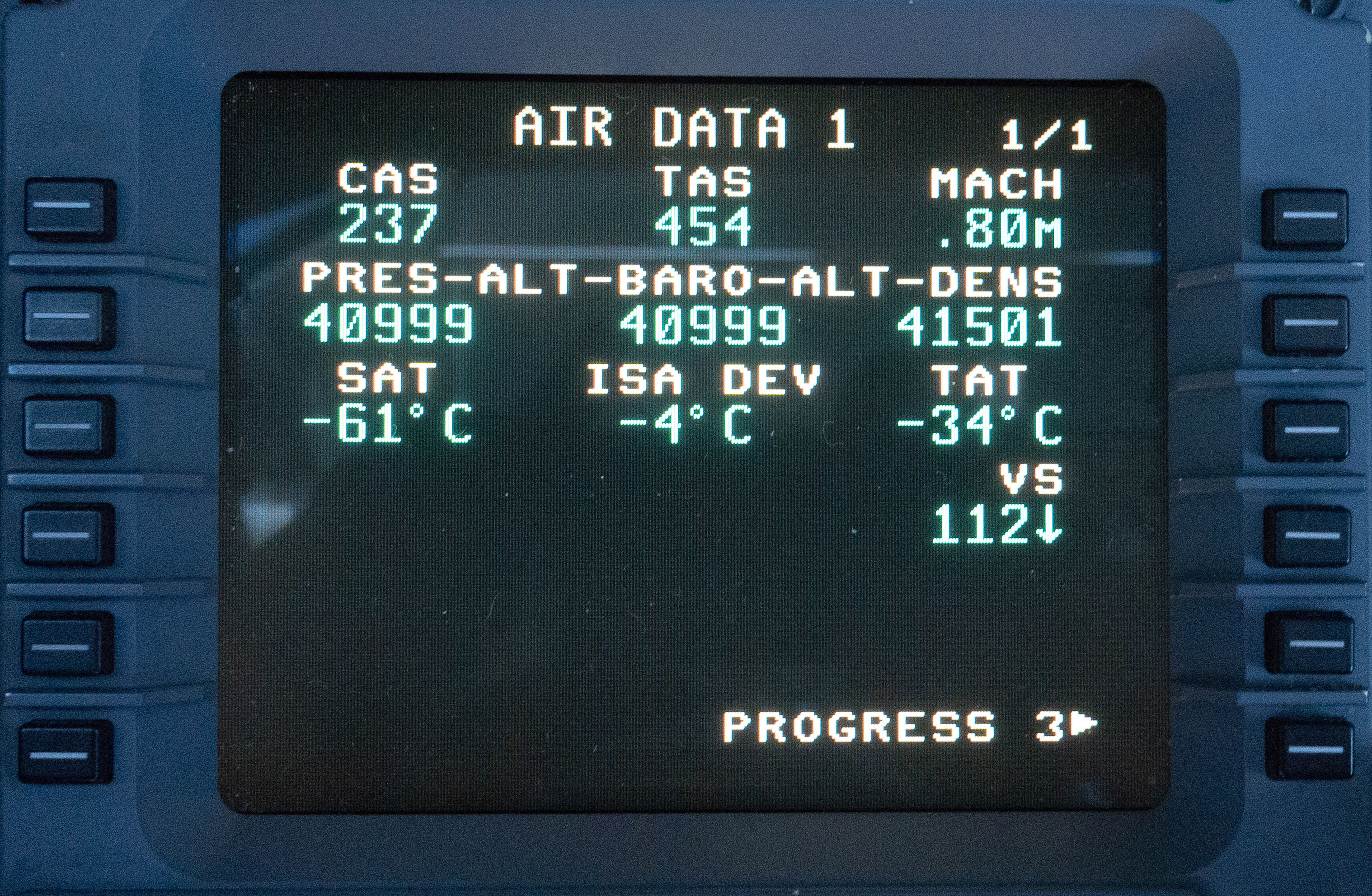 At each waypoint you should:

Improving your odds before you leave the ground

At the very least, you can look at your ETP fuel remaining calculation and decide to takeoff with more fuel, then replan at the higher weight and possibly lower altitudes. If your flight planning service allows some customization, you might be able to dial in these extra margins automatically. 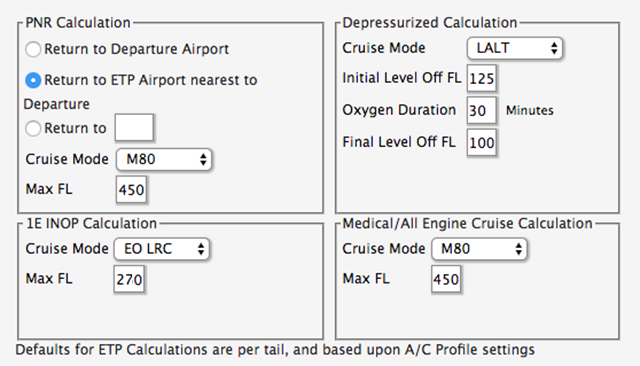 Your flight planning service may allow you to add factors to your ETP fuel computations. ARINC Direct, for example, adds a default 45 minutes of holding at the ETP airport at 1,500 feet AGL at AFM holding speeds. You can change many of the calculation assumptions directly on the "Create Flight Plan" page. Here are a few ideas on how to best customize this:

Making a 180° turn at altitude isn't as simple as one might think. At most crossing altitudes your true airspeed will be very high, 400 knots or higher. Your available bank angle will be less, say around 17° or so. If you are on track with 30 nautical mile spacing, you will be getting very close to your neighbors. With 15 nautical mile spacing? Forget about it. Within an organized track system, it may not be possible at all. It is something to consider. 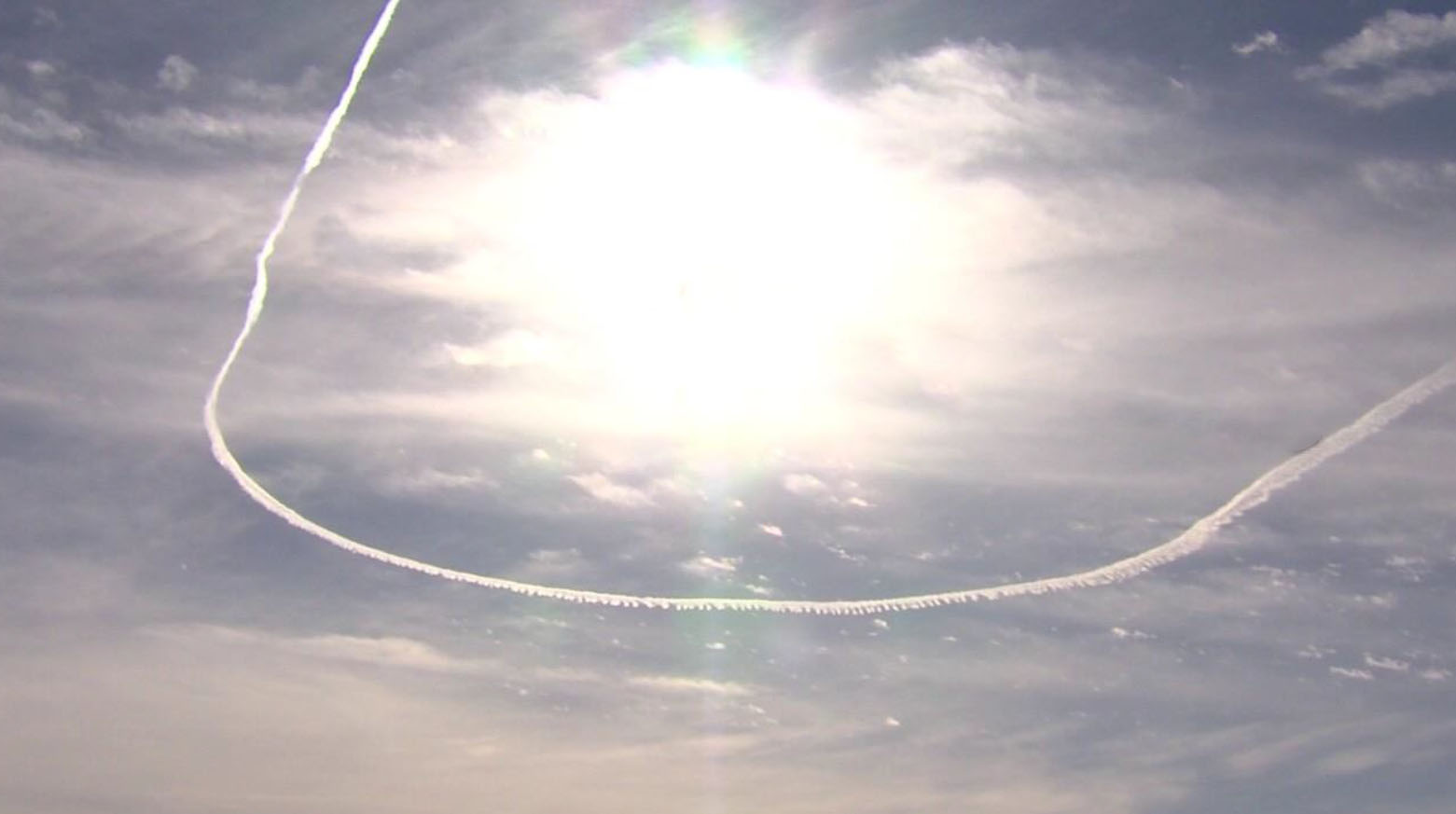 Computing your turn radius is simply a matter of dividing your true airspeed by the mathematical tangent of your bank angle and a magical factor:

More about this: Turn Performance.

Of course the turn diameter is double this and you also need to figure on wind effects.

In the case of a Gulfstream 450 and FL410 doing 0.80 Mach (around 460 KTAS), limited to 17° of bank, the turn radius is just a bit over 10 nm which means the diameter is just over 20 nm. If you are on a Reduced Lateral Separation track, with only 30 nm between tracks, the distance gets eaten up quickly. If you are flying east bound with a 2 nm Strategic Lateral Offset Procedure (SLOP) and need to turn right, you could end up 30 - 2 - 20 = 8 nm of the next track.

Imagine a scenario where you are flying above 70° North latitude and still have five hours left in the flight. One of your passengers appears to be suffering a stroke. You have an alternate right in front of you. Easy decision, right? Not so fast.

More about this: High Latitude Operations. 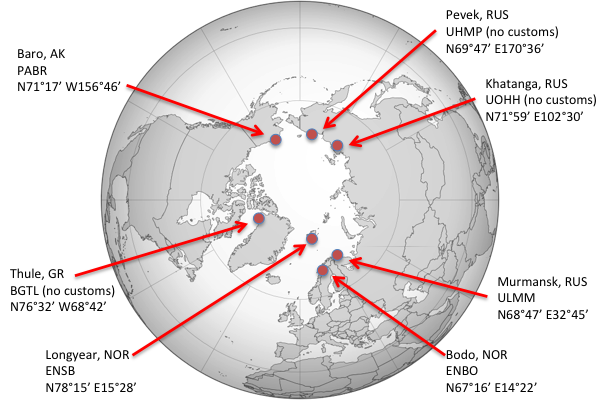 The problem with some remote alternates:

Things get a little more complicated for commercial operators, but usually for the better. Part 121 operators, for example, need to consider many (but not all) of the problems I've shown here. A helpful reader brings any of these up and has graciously agreed to share them with you.

Even those of us who fly purely under Part 91 can take a few of these points as best practices.

Have read your articles forever. I appreciate the depth of thought that goes into them in trying to make the pilots safer people who THINK and aren’t just fancy FMS-typists.

A couple of other issues that are required under 121.646 that it would behoove our 91/135 brethren to consider:

Just some thought to consider.