Wing tip vortices? Well I've been on both sides of this problem. I was once fully inverted in a T-37, just 200 hundred feet off the deck, having been caught behind the wake of a much heavier FB-111. I became a believer. Years later I was flying a Boeing 747 where it was of no concern to me, other than as a matter of politeness to other, smaller, aircraft. 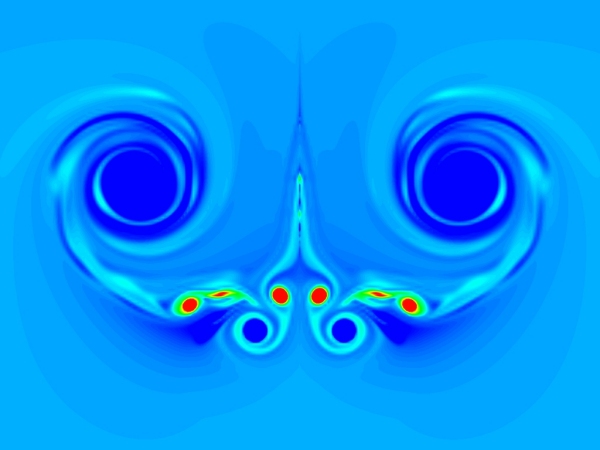 Now, flying Gulfstreams, I think about it a lot.

Every aircraft generates a wake while in flight. Initially, when pilots encountered this wake in flight, the disturbance was attributed to “prop wash.” It is known, however, that this disturbance is caused by a pair of counter−rotating vortices trailing from the wing tips. The vortices from larger aircraft pose problems to encountering aircraft. For instance, the wake of these aircraft can impose rolling moments exceeding the roll-control authority of the encountering aircraft. Further, turbulence generated within the vortices can damage aircraft components and equipment if encountered at close range. The pilot must learn to envision the location of the vortex wake generated by larger (transport category) aircraft and adjust the flight path accordingly.

Lift is generated by the creation of a pressure differential over the wing surface. The lowest pressure occurs over the upper wing surface and the highest pressure under the wing. This pressure differential triggers the roll up of the airflow aft of the wing resulting in swirling air masses trailing downstream of the wing tips. After the roll up is completed, the wake consists of two counter−rotating cylindrical vortices. Most of the energy is within a few feet of the center of each vortex, but pilots should avoid a region within about 100 feet of the vortex core.

The strength of the vortex is governed by the weight, speed, and shape of the wing of the generating aircraft. The vortex characteristics of any given aircraft can also be changed by extension of flaps or other wing configuring devices as well as by change in speed. However, as the basic factor is weight, the vortex strength increases proportionately. Peak vortex tangential speeds exceeding 300 feet per second have been recorded. The greatest vortex strength occurs when the generating aircraft is HEAVY, CLEAN, and SLOW.

In rare instances a wake encounter could cause inflight structural damage of catastrophic proportions. However, the usual hazard is associated with induced rolling moments which can exceed the roll-control authority of the encountering aircraft. In flight experiments, aircraft have been intentionally flown directly up trailing vortex cores of larger aircraft. It was shown that the capability of an aircraft to counteract the roll imposed by the wake vortex primarily depends on the wingspan and counter control responsiveness of the encountering aircraft.

Trailing vortices have certain behavioral characteristics which can help a pilot visualize the wake location and thereby take avoidance precautions.

Because of the possible effects of wake turbulence, controllers are required to apply no less than specified minimum separation for aircraft operating behind a heavy jet and, in certain instances, behind large non heavy aircraft (i.e., B757 aircraft).

A 3-minute interval will be provided for all aircraft taking off when the operations are as described in subparagraph b1 and 2 above, the preceding aircraft is a heavy/B757 jet, and the operations are on either the same runway or parallel runways separated by less than 2,500 feet. Controllers may not reduce or waive this interval.

Pilots may request additional separation i.e., 2 minutes instead of 4 or 5 miles for wake turbulence avoidance. This request should be made as soon as practical on ground control and at least before taxiing onto the runway.

The EU instituted a six category system which keeps the filing codes the same but adds subcategories with tailored separation minima. For more about this, see the European Wake Turbulence Categorisation and Separation Minima on Approach and Departure, known as RECAT-EU. 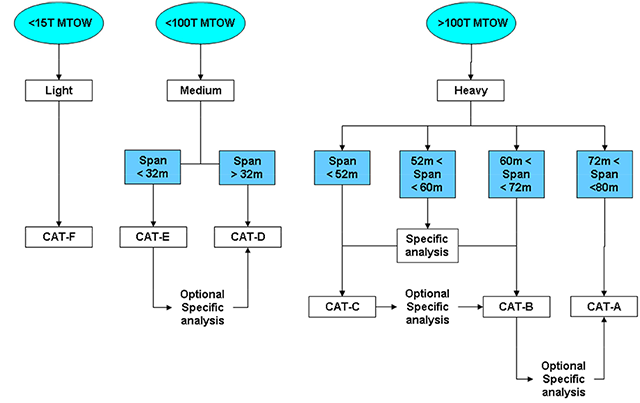 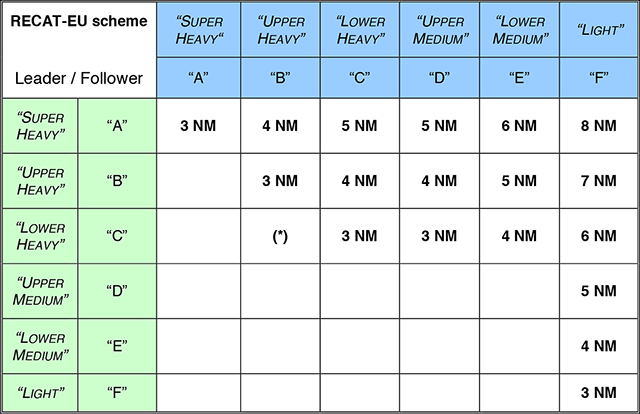 RECAT-EU Distance-based separation on approach and departure, from RECAT-EU, Table 3. 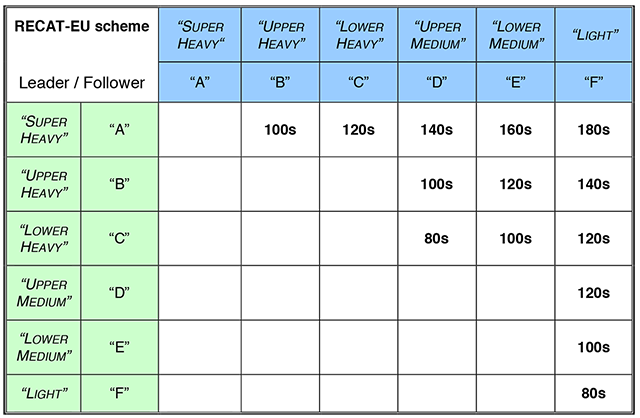