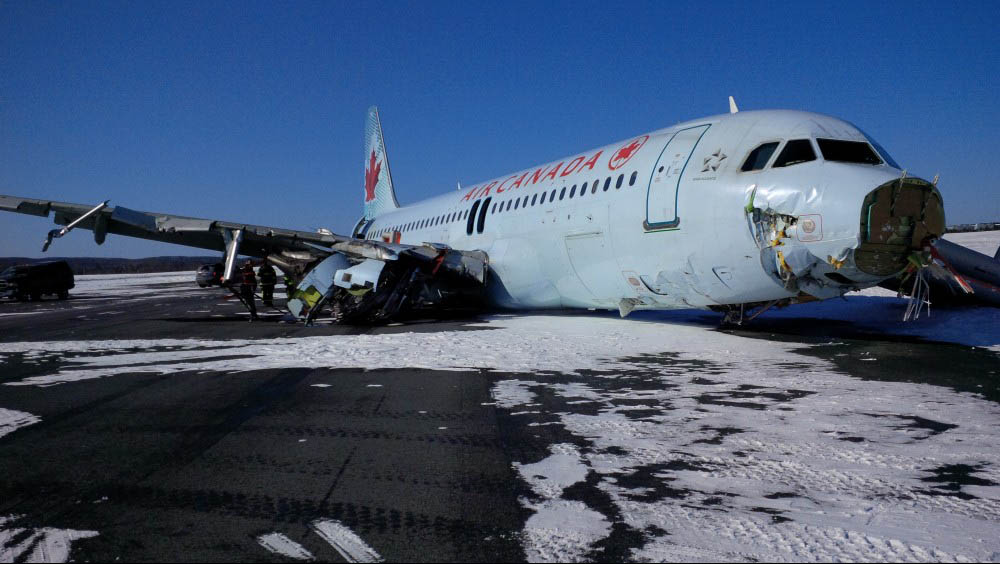 Do you ever wonder if there is a very obscure factoid out there that you have never been told about that is just lying in wait to bite you. That perhaps you are trying to do everything right, but because someone along the way left something out of your training and that something could cause you to destroy an airplane? I think that might describe these pilots who seem to have conducted themselves very well except for one small mistake and one big decision just seconds before they destroyed this airplane. But the alarming thing is I think that little factoid they were missing is something most of us may not know about either.

The little something has to do with Flight Path Angle (FPA) and how you use it on non-precision approaches. If you don't have an FPA or never heard of it, the same thing applies to using your autopilot's vertical speed function to descend from your FAF altitude down to the MDA or CDFA. If you don't understand that the FPA isn't drawn from the runway up, but from the airplane down, you need to do a little more study on the matter. I've tried to help in this article: Sitting Duck (Under). (If you don't fully understand FPA, you are a sitting duck for an automated duck under.) 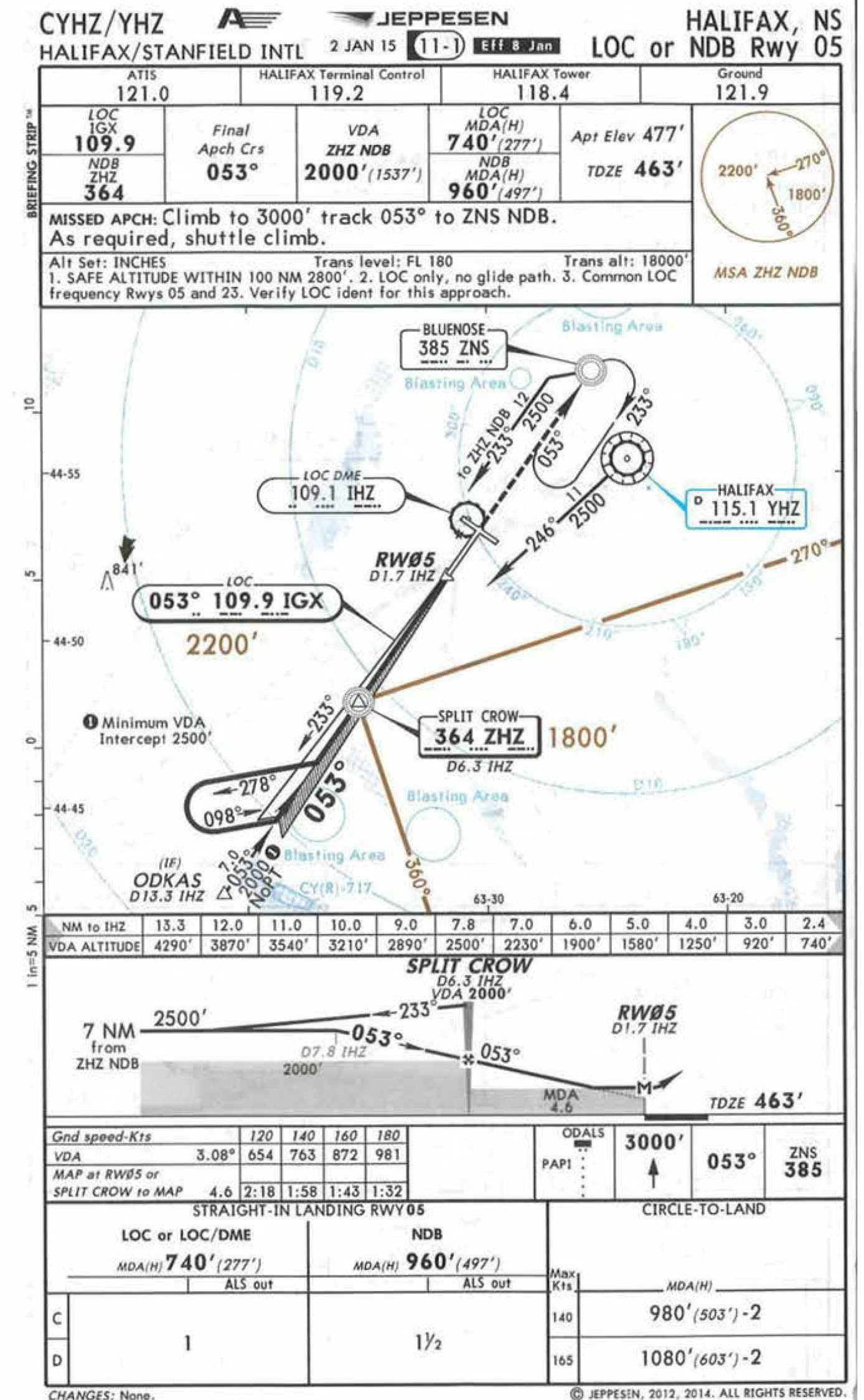 The pilot flying made one small mistake when he began his descent from the FAF altitude: he started 0.2 nm early. That doesn't seem like much but it meant his airplane was on an angle that began (0.2)(6076) = 1,215 feet early. And that angle, if nothing else was changed, meant they would be 50 feet above the runway threshold 1,215 feet early too. But what the report calls "perturbations," such as the winds and turbulence, also pushed the airplane down in small doses, but from each of these pushes, the airplane resumed its FPA descent but from a lower altitude. The report misses another problem, however. Air Canada SOP had the crew adjust the FPA for the cold temperature as well, further lowering their glide path. So they were destined to make contact with the ground early if they did nothing to arrest the descent. And that leads to the very big mistake at the end. The visibility was poor and they continued the autopilot's descent below the MDA based on their dim view of the approach lights.

You might be wondering about the crew's decision to increase the FPA to 3.5° from the published 3.06°, in accordance with their manuals. The published FPA is based on the geometry of starting at 2,000 feet actual altitude and ending up 50 feet over the end of the runway, actual altitude:

There may be a slight rounding error, but 3.06° appears correct.

The temperature correction means the airplane's altimetry begins 200 feet higher but ends up at the same point over the runway, so the math changes slightly:

But this all assumes that correction is constant from the FAF down to the runway; it isn't. Airbus and Air Canada have since given up on temperature correcting FPAs. For an explanation on why, see: Altimeter Temperature Correction / FPA.

As the aircraft descended, the actual flight path diverged from the desired profile as a result of wind variations. The divergence continued to increase throughout the approach. The airspeed was constant, and the vertical descent speed ranged between 700 and 800 feet per minute (fpm). 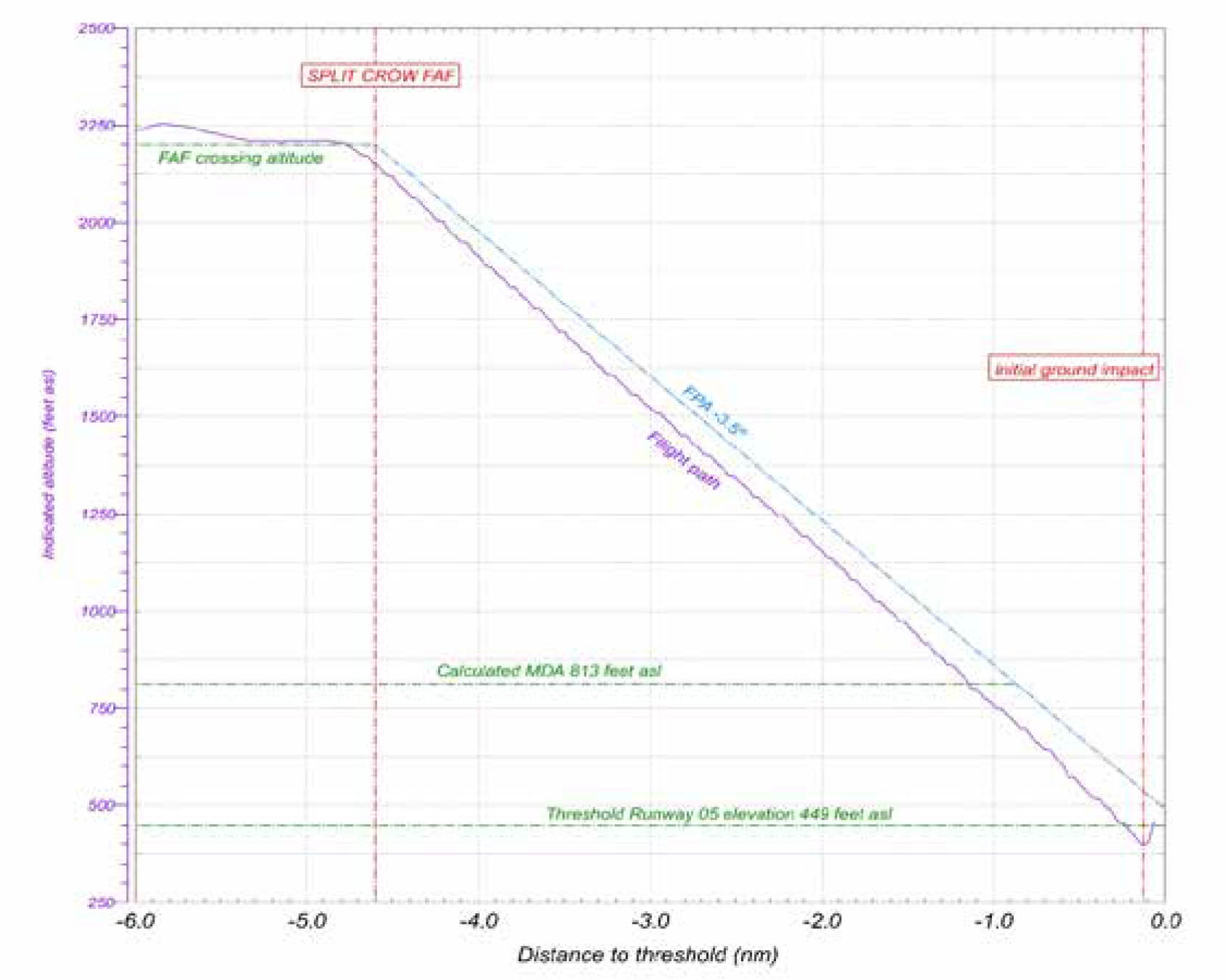 At 0029:27, a radio altimeter automated audio call (automated call) of “400” was made, indicating that the aircraft was 400 feet above the terrain. Almost immediately after this call, the aircraft crossed the calculated MDA at 1.2 nm from the threshold. The PM observed some approach lights and called, “Minimum, lights only,” when the aircraft was about 1.0 nm from the threshold. The PF immediately called, “Landing,” and began to observe some approach lights. By this time, the aircraft had crossed the published MDA (740 feet ASL) and was 0.3 nm farther back than the published distance. The autopilot remained engaged as the aircraft continued descending, and there was no reduction in the descent rate.

When the aircraft was about 0.7 nm from the threshold, the flight crew had a conversation in which both confirmed they could see some approach lights. At this time, the aircraft crossed over a lighted facility.

When landing in very poor visibility, we expect to see the approach lights in front of us (or nearly in front of us if in a crosswind) and in a certain spot below us in the windshield. In this case, the added distance at the MDA lowered their look-down angle substantially. They should have been 277 / tan(3.06) = 5,182 feet from the runway at the MDA. The extra 1,883 feet of distance meant their actual angle was arctan(277 / (5182+1883)) = 2.2° -- about a degree lower. If our descent angle is off by a degree or two, we are unlikely to detect the difference. You expect to see the lights, and when you do, you expect they are in the correct position. 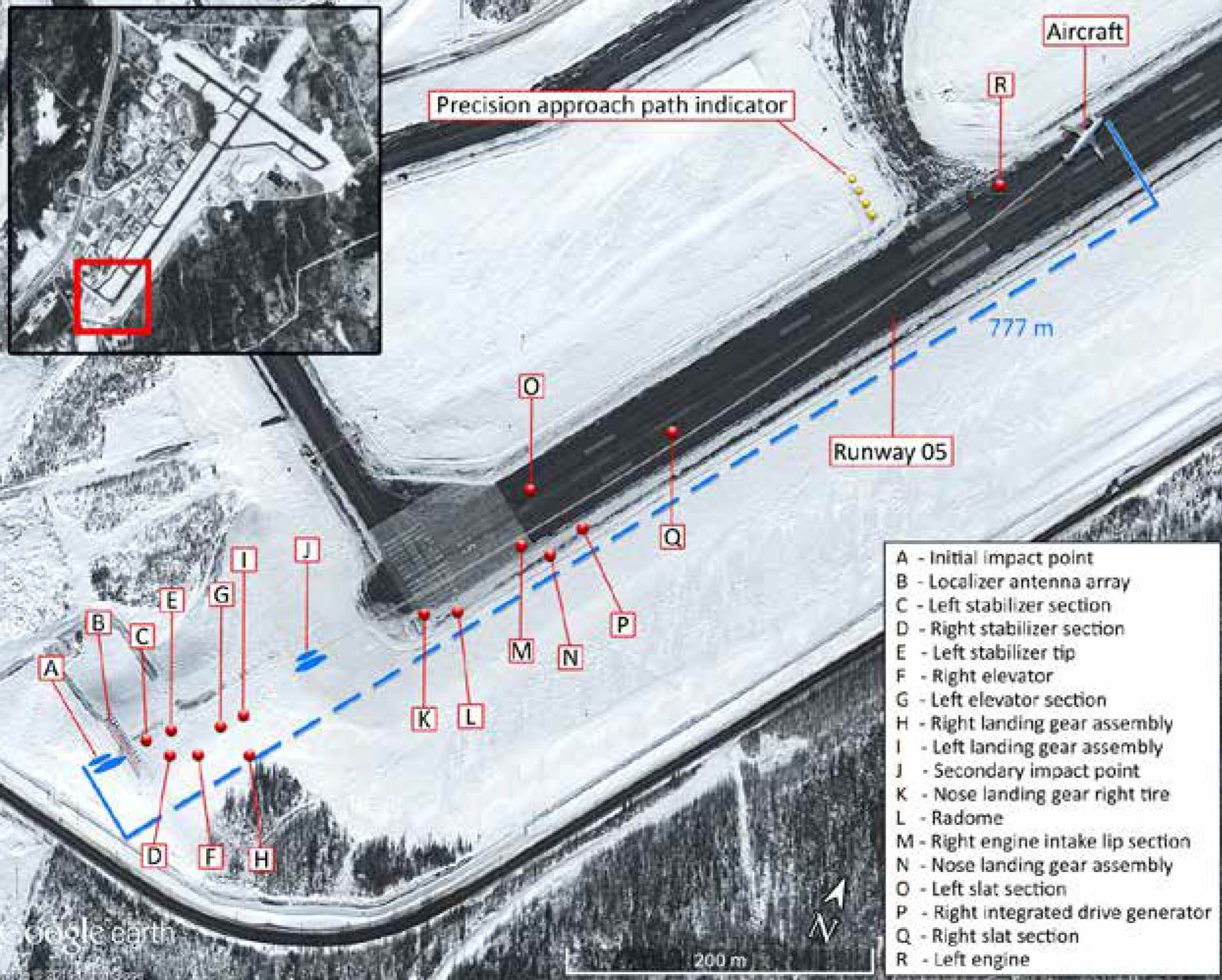 I was impressed with the professionalism of this crew and am worried that making a 0.2 nm mistake can end so badly. We often take away from these case studies important lessons that can seem rather obvious in hind sight. I think the lesson of this accident is to pay attention to the details and don't trust a new procedure, like a temperature corrected FPA, until it has been sufficiently tested. 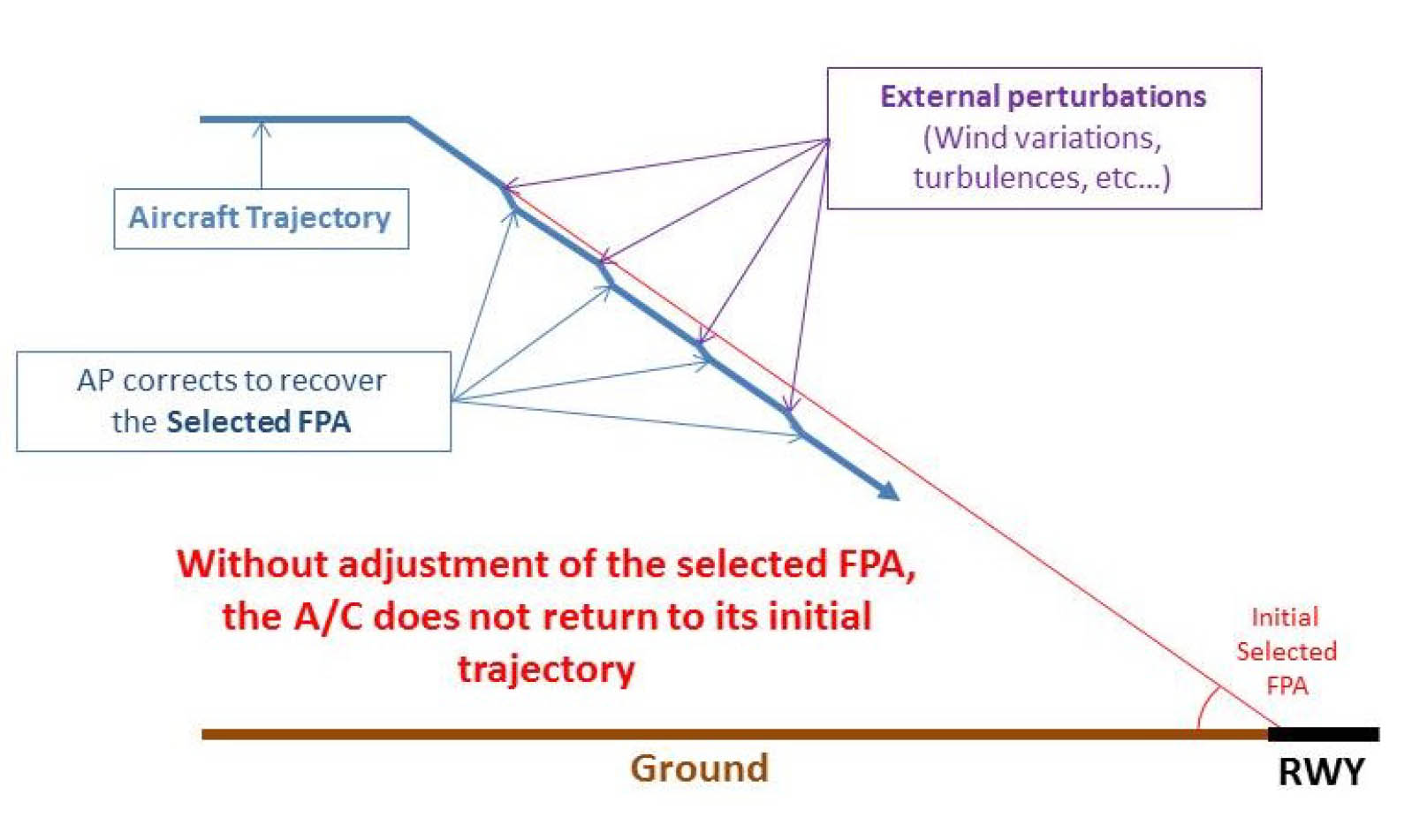 An Air Canada Boeing 767 was damaged after landing at Halifax on March 8, 1996. The aircraft suffered a tail strike because of an unusually high pitch attitude. The accident report says: "Visual illusions during the approach caused both crew members to believe that the aircraft was higher than it actually was, leading to an unwarranted thrust reduction 10 seconds before touchdown." The accident report noted that the runway's slope is 0.77 percent up for the first one-fourth of its length and then goes down at 0.5 percent to the halfway point, after which point it is level. It is possible that Air Canada 624's crew was also faced with the same visual illusion.

I think the accident report got this mostly right and I think that should be alarming to most pilots. After you've shot your 10th or 20th landing to minimums, you start to think it isn't that big a deal. And perhaps with an ILS and a full set of approach lights it isn't. But a non-precision approach changes everything. If you have a HUD that gives you an FPA and an FPV (Flight Path Vector) you owe it to yourself to get into the habit of looking at them for every landing. That way when the weather is poor and a visual illusion is about to bite you, you will figure that out before it does. More about how to land with the FPA/FPV combination: Sitting Duck.

There were many other factors listed in the report, these are just the pilot related factors.