This mishap occurred as France and much of the European Union was placing all its bets on Airbus and that company's promise of a safer airplane. The so-called "Airbus Philosophy" was a design that would override many pilot inputs to prevent accidents. For example, computers prevent the pilot from climbing above 30 degrees (to prevent a stall) or pitch down below 15 degrees (to prevent overspeed). Furthermore, it would not allow the pilot to bank or roll more than 67 degrees or make any maneuvers greater than 2.5 times the force of gravity. 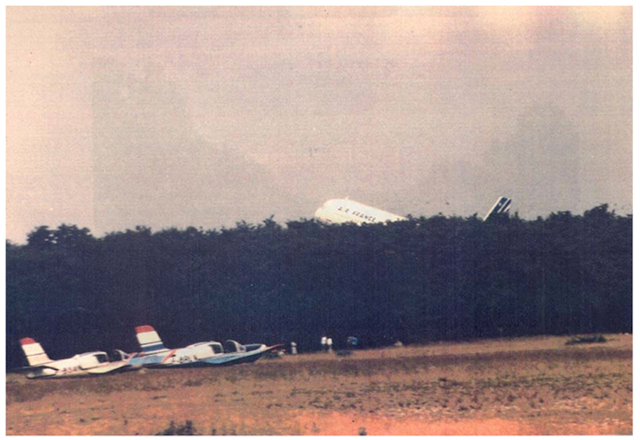 All transport category airplanes that came before the Airbus were built on what some call "the Boeing Philosophy," which alerted the pilot when something was amiss, but would always defer to the pilot. If, for example, a Boeing pilot were to pull the power back and bring the nose up, the airplane warns the pilot until the pilot either recovers or crashes. The Airbus will override the pilot's power and pitch inputs to prevent the stall. (But not necessarily the crash.)

This first crash of an Airbus A320 would serve as a test of the competing philosophies and could doom the European company for good. An Air France captain was selected to head the country's Bureau d'Enquetes et d'Analyses (BEA) investigation, which was very unusual.

The accident report leaves no doubt that this was the pilot's fault; there is no cause for alarm, you can keep your orders for your new Airbus 320 with full confidence. Or can you?

There is evidence which points the other way. It appears that though the pilot was flying too low and should have been able to tell the difference between a runway fly by at 100 feet versus 30 feet, it was the airplane that produced a slower than expected engine acceleration and overruled the pilot's aft stick input with a nose down command in an effort to prevent a stall.

France convicted the captain of involuntary manslaughter. He continues to this day trying to clear his name. You can decide for yourself, but I believe both are to blame. The captain mishandled the fly by, getting the aircraft too low and slow, causing the slow engine acceleration. The aircraft overruled his elevator inputs and prevented a stall but flew the airplane into the forest.

Note that I also quote the investigative television series Mayday, also known as Air Crash Investigations. I've seen them skew their reporting in other aircraft accidents to favor those who give them better access. In this case, the captain of this ill-fated flight gave them a lot of interviews and the program is sympathetic. I've tried to pick the more plausible lines. As I said before, you can decide. (For what it's worth, I think a case can be made that the Airbus is a very safe airplane, but it requires pilots to change their thought processes in many ways.)

Here is a chilling video of the crash: Air France 296 Crash. 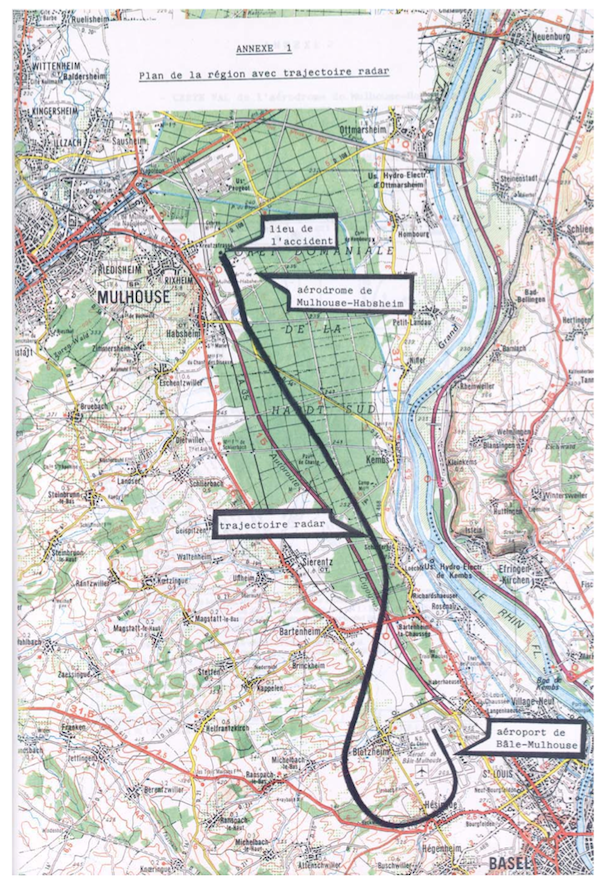 The newly delivered Airbus A.320 was to perform for Air Charter a series of flights on behalf of the Mulhouse Flying Club. The crew were to overfly Mulhouse-Habsheim airport two times (first at low speed, gear down at 100 feet and the other at high speed in clean configuration) as part of an airshow.

The captain was somewhat of a superstar at Air France and had been regularly chosen to fly this type of airshow. There were problems with this particular set up, however. The diagrams he was provided indicated the fly over was to be over the airport's longer, paved runway which appeared to have clear approach and departure terrain. The airshow. crowd, however, was positioned along the shorter, grass runway. This runway was lined with trees on the approach and departure end that were later measured at 40 feet AGL. These trees were not visible on the photocopied approach plate given the captain.

The aircraft took off from Basle-Mulhouse (BSL) at 14:41 and climbed to 1000 feet agl. The crew started the descent three minutes later and Habsheim was in sight at 450 feet agl. The first officer informed the captain that the aircraft was reaching 100 feet at 14:45:14.

French regulation forbade going lower than 170 feet AGL on such a maneuver, but the Air France rule book clearly allowed the maneuver to be flown at 100 feet. 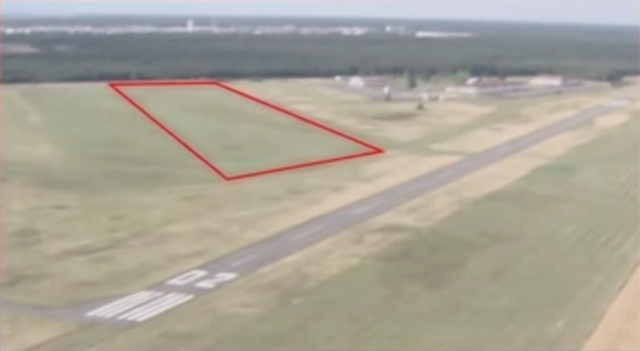 Runway confusion, from "May Day"

The crew had planned their descent on the paved runway but had to change their plan because the crowd was lined up on the shorter, grass runway. The throttles were apparently at idle when they reached their target altitude and they were faster than the target speed to produce maximum AOA. It is likely the throttles stayed at idle longer than the captain thought.

The descent continued to 50 feet 8 seconds later and further to 30-35 feet. 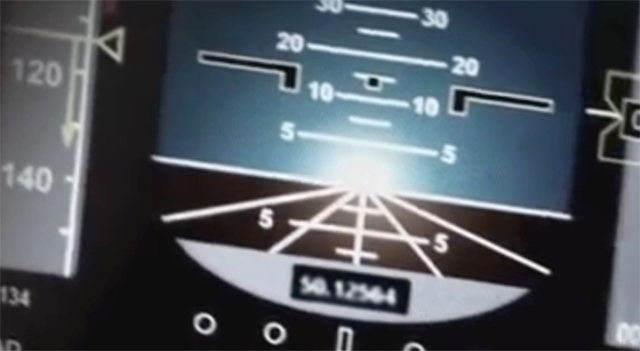 Radio altimeter, from "May Day"

The captain insists he was at 100 feet AGL based on his barometric altimeter. He claimed, and evidence supports, that the radio altimeter on this airplane was too hard to read quickly. He also said the audio radio altimeter callouts used for landing maneuvers could not be heard because of the noise level.

Concerning the charge of flying below 100 feet, all appointed experts and the Disciplinary Committee found that the crew did not intentionally pass under this limit.

I have flown a number of airshow demonstrations in the Boeing 747 and find his claims hard to believe. The cockpit view from 100 feet is dramatically different than 30 feet, at high and low angles of attack.

The airshow routine was for a slow speed pass at "Alpha Max," meaning the maximum angle of attack. One of the problems with flying at 30 feet was the airplane was in ground effect and that permitted a much high angle of attack than the captain had experienced before. This would explain a longer than expected engine spool up time.

An Airbus document reveals a defect on the engine on the A320. It says the plane's engine speed could stagnate at low altitude, a condition caused by poor air flow.

The time the captain applied full power to the engines is debatable. A high quality video tape of the entire fly by and crash became available the same day and investigators analyzed the sound of the engines to determine power settings. They used these to estimate the power application was made late. But later analysis, comparing the cockpit voice recorder and tower tapes show the CVR voice print was adjusted by 4 seconds, leading investigators to dismiss the captain's allegation of slow engine spool up. 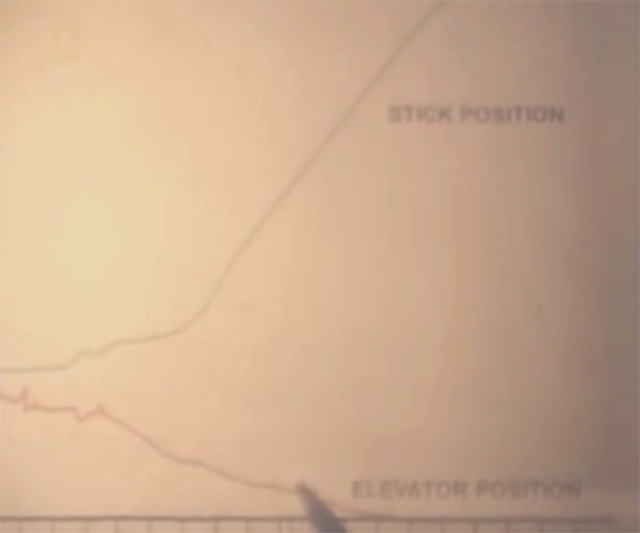 Stick vs. elevator position, from "May Day"

The captain stated in an interview, "When I pull the stick to the up position, the flight controls, the elevator control, goes to down position." His accusations go to the heart of doubts about the aircraft. His allegations are supported by data from the flight data recorder. It does show that seconds before the crash, [the captain pulled the stick] back to get the plane's nose up. [Investigators discover] "he's telling the truth, the elevator moved down."

There was speculation at the time that when the aircraft crossed over the approach end tree line, the radio altimeter dipped below 30 feet and put the aircraft into the "landing mode." Investigators replicated the event in an airplane on a longer runway and discovered the flight computer would not enter landing mode, rather it would nose over for "alpha protection." This mode is a safety feature to prevent stall.

The lead investigator dismisses all this, saying that even if it were true then the airplane prevented a stall and landed the airplane in the forest., explaining why only 3 people of the 136 on board died.

The right wing sheared off before the airplane came to a rest, the fire broke out on the left side of the aircraft. Incredibly, the fuselage was still in one piece.

The last communication between the tower and the aircraft were recorded at 12:44:28 on tower tapes, but at 12:44:31 on the cockpit voice recorder. According to black box data, [the captain] was five seconds from impact with the trees when he commanded full thrust from the engines. But according to [independent British television analysis] this occurred four seconds earlier.

There is a cult of conspiracy around these black boxes, including photos showing the boxes taken from the airplane are different than those shown to the press and the tapes themselves show splices.

The Commission believes that the accident resulted from the combination of the following conditions: 1) very low fly over height, lower than surrounding obstacles; 2) speed very slow and reducing to reach maximum possible angle of attack; 3) engine speed at flight idle; 4) late application of go-around power. This combination led to impact of the aircraft with the trees. The Commission believes that if the descent below 100 feet was not deliberate, it may have resulted from failure to take proper account of the visual and aural information intended to give the height of the aircraft.