The pilots did an excellent job gliding their airplane to a safe landing, not a single occupant was injured. Now, having said that, how did the airplane lose all that fuel and end up becoming a glider? There is an old Air Force joke seems to apply: "Excellent job recovering from the spin, lieutenant! Now how did you get into the spin in the first place?" 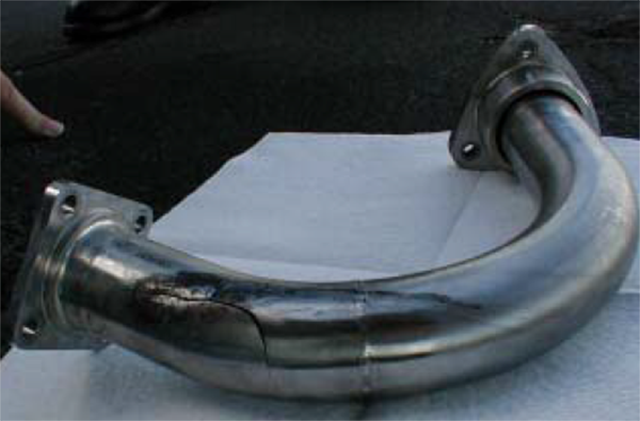 The accident report omits a few key points and there is a lesson for all pilots in the end.

I've had a few fuel leaks over the years, the worst of which was in a Boeing 707, story retold here: B-707 Fuel Bath Tub. My first concern is usually fire and then to the age-old question: do I have enough fuel to make it to land? Whenever you crossflow you need to make sure all of the fuel that is leaving a tank arrives at the other tank. If the total fuel decreases more than your fuel burn, you have a problem.

In older aircraft that I have flown, fuel burns in each engine can vary appreciably and having to transfer fuel is routine. In the newer aircraft, having a fuel imbalance is uncommon. In either case, it should not be a set and forget procedure, it needs to be monitored closely. If you suspect a leak in the engine, it needs to be shut down to stop the fuel loss and to prevent a fire.

The G450/G550 FMS measures fuel burn at the engine. If it differs appreciably from the fuel decrease in the tanks, you have some investigating to do. See Fuel Leak Inflight for more on this.

Later investigation revealed "scratches and scores were directionally aligned and that they would have been caused by repeated contact from a blunt instrument, such as a screwdriver being inserted between the tubes in order to force clearance between them.

It is well known that a flex tube will tend to expand radially, shorten in length, and straighten once pressurised. Considering the hydraulic system working pressure of 3,000 psi and the pump pulsation, it is feasible that any clearance present at installation on the occurrence aircraft would have vanished once the line was pressurized.

On August 24, 2001, Air Transat Flight TSC236, an Airbus 330-243 aircraft, was on a scheduled flight from Toronto Lester B Pearson Airport, Ontario (CYYZ), Canada to Lisbon Airport (LPPT), Portugal with 13 crew and 293 passengers on board. The Captain was carrying out the pilot flying (PF) duties for this flight. TSC236 was planned to depart CYYZ at 00:10 UTC1, with 47.9 metric tons of fuel2, which included a 5.5 tons over and above the fuel required by regulations for the planned flight; the actual take-off time was at 00:52 with a reported 46.9 tons of fuel on board. According to the crew, the flight progressed normally until after crossing 30° West and at 05:03 when they observed unusual engine oil indications on the Number 2 (right) engine (Rolls-Royce RB211 Trent 772B)3. The ENGINE Electronic Centralized Aircraft Monitoring System (ECAM) page was manually selected by the crew, and the oil indications were communicated by high-frequency (HF) radio to the dispatcher at the company's Maintenance Control Centre (MCC)4 at Mirabel Quebec, Canada.

The engine oil indications were the unusual combination of low oil temperature, low oil quantity, and high oil pressure. The assumed the issue was a computer indication problem, not an engine problem.

At approximately 05:33, an advisory ADV message was displayed on the Engine/Warning Display (EW/D). The crew noticed the ADV and deselected the ENGINE ECAM page. This action resulted in the Fuel ECAM page being displayed and the crew becoming aware of a fuel imbalance between the left and right inner-wing tanks. To correct the imbalance, the crew selected the cross feed valve OPEN and the right-wing fuel pumps OFF in order to feed the right engine from the left-wing tanks.

The fuel logs had shown normal fuel burns during the first four hours of the flight, the last normal reading having taken place at 04:57.

The crew stated that, although indications of a lower-than-expected fuel quantity were recognized shortly after receiving the fuel imbalance ADV, they did not consider the FUEL LEAK procedure until later in the flight.

Two cardinal rules of transferring fuel between tanks should be (1) make sure the fuel imbalance isn't being caused by a leak so you can avoid "feeding the leak," and (2) confirm the fuel is getting to where it should be going. In this case, the fuel leak was in the engine itself and the crossfeed was indeed feeding the leak.

Shortly thereafter, the crew became aware that the fuel remaining on board was only 11 tons, or 8.5 tons below the expected amount of fuel. According to the crew, both the imbalance and fuel quantity indications were unusual and unexplainable. Neither of the pilots had ever encountered a fuel leak or an unexplained low fuel quantity either in training or in flight.

At 05:45, the fuel on board had reduced to below the minimum required fuel on board to reach Lisbon, and the crew initiated the diversion to Lajes Airport (LPLA) on Terceira Island in the Azores. By 05:48, the crew advised Santa Maria Oceanic air traffic control that the flight was diverting due to a fuel shortage; the fuel on board had reduced to 7.0 tons. In attempts to resolve the sudden and unexplained reduction in the fuel quantity readings, the crew asked the cabin crew to visually check the wings and engines for a possible fuel leak: the visual check did not reveal any evidence of a fuel leak.

This did not have the desired effect, since the right engine continued to consume fuel. The correct action would have been to shut the engine down.

The crew then contacted MCC on HF, advising the dispatcher of the inexplicable low fuel quantity readings. At this time, fuel on board was 4.8 tons, or 12 tons below the planned quantity. The crew reported that they could not determine what the problem was, that the fuel indication was continuing to reduce, and that the apparent fuel leak was happening in the right-wing inner tanks. At 05:59, during the dialog with MCC, the crew reported that the fuel quantity had further reduced to 1.0 tons in the right tanks and 3.2 tons in the left tanks. MCC asked whether the fuel loss might be a leak in the left engine. In reaction to this suggestion, the Captain momentarily reselected cross feed from the left tanks. The crew stated that all fuel pumps were selected ON when the fuel remaining was 1.1 tons.

The crew stated that because there were no other signs of a fuel loss, other than the lower than expected quantity of fuel on board, and because there had been no other ECAM warnings or cautions both pilots believed that the problem was a computer fault. They also stated that although they had used the term "fuel leak" on many occasions during the occurrence, a logical link to considering the FUEL LEAK check and the possibility that the fuel leak existed did not occur until the aircraft indicated fuel quantity was about 7 tons.

If the problem was indeed with the computers, no fuel transfer would have been needed and they could have verified the imbalance with lateral trim requirements.

At 06:13, when the aircraft was at FL390 and 150 miles from Lajes, the right engine flamed out. The crew notified Santa Maria control that the engine had flamed out and that the flight was descending. At 06:15, the crew reported to air traffic control that the fuel on board had reduced to 600 kilograms. At 06:23, the First Officer declared a "Mayday" with Santa Maria Oceanic Control, and at 06:26, when the aircraft was 65 nautical miles from the Lajes airport and at an altitude of about FL 345, the left engine flamed out. The ALL ENG FLAME OUT procedure was completed by the crew and an engines-out descent profile was flown towards Lajes.

At 06:31, the flight was transferred to Lajes Approach Control. Assisted by radar vectors and flashing of the runway lights, the aircraft arrived about 8 miles off the approach end of runway 33 at approximately 13 000 feet on a track of about 270°. The Captain advised Lajes that he was conducting a left 360-degree turn in order to lose altitude. During the turn, the aircraft was configured with leading-edge slats out and landing gear down for the landing. S-turns were con- ducted on final to lose additional altitude.

At 06:45, the aircraft crossed the threshold of runway 33 at about 200 knots, touched down hard 1 030 feet down the runway, and bounced back into the air. The second touchdown was at 2 800 feet from the approach end of the runway, and maximum braking was applied. The aircraft came to a stop 7,600 feet from the approach end of the 10,000-foot runway. After the aircraft came to a stop, small fires started in the area of the left main-gear wheels, but these fires were immediately extinguished by the crash rescue response vehicles that were in position for the landing. The Captain ordered an emergency evacuation. Fourteen passengers and two cabin-crew members received minor injuries, and two persons received serious injuries during the emergency evacuation. The aircraft suffered structural damage to the fuselage and to the main landing gear. 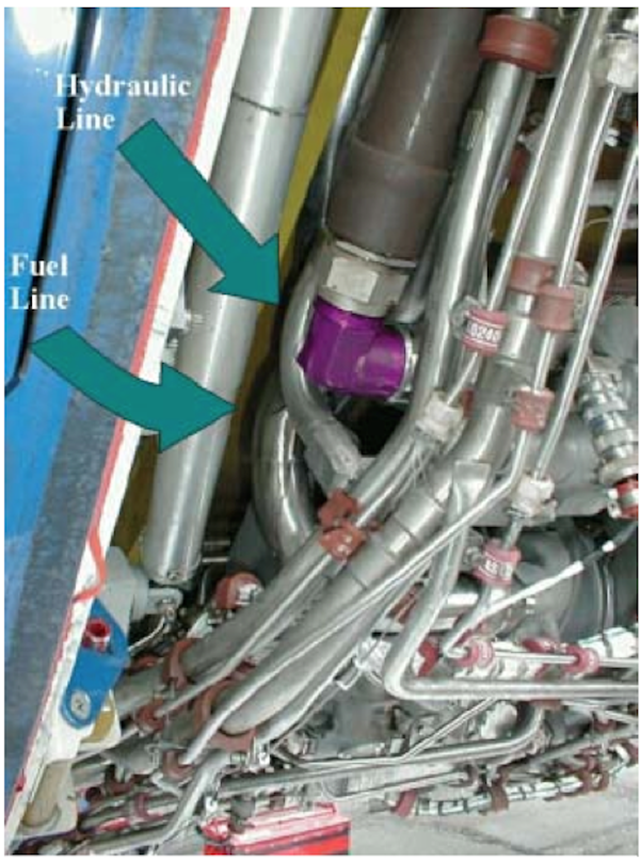