This crew "dipped below" their minimum descent altitude by at least 300 feet and hit trees which damaged their engines and may have hurt their go around capability. It was turbulent, to be sure. They were using standard, for back then, "dive and drive" techniques. It appears the captain forgot to level off at the MDA, the first officer caught this, and the captain reacted by pressing the altitude hold button. The aircraft started to decrease its descent rate but struck the first set of trees four seconds later. 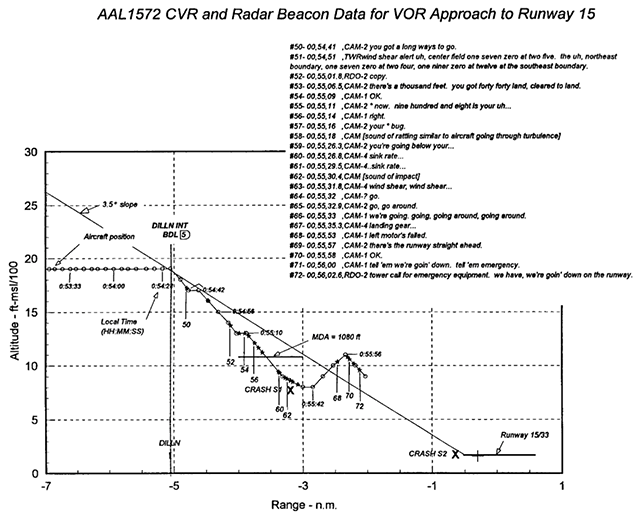 I often examine these mishaps with a look at what corrective action is taken to understand what really happened in the first place. From an American Airlines bulletin distributed to its DC-9 pilots on January 19, 1996:

Growing up in the "We eat our young" flight evaluation world, we always treated the MDA has a concrete floor, looking for even an inch of deviation before saying "I've got it." But there is a better way. Why not just stop using the MDA completely? More about this: Continuous Descent Final Approach (CDFA). 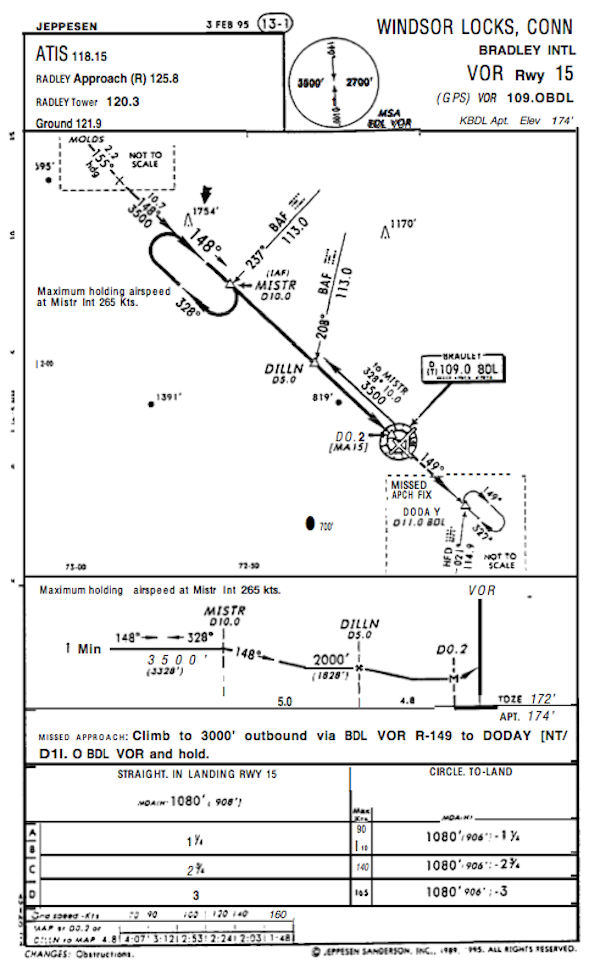 On November 12, 1995, at 0055 eastern standard time a McDonnell Douglas MD-83, N566AA, owned by American Airlines and operated as flight 1572, was substantially damaged when it impacted trees in East Granby, Connecticut, while on approach to runway 15 at Bradley International Airport (BDL), Windsor Locks, Connecticut. The airplane also impacted an instrument landing system antenna as it landed short of the runway on grassy, even terrain. Flight 1572 was being conducted under Title 14 Code of Federal Regulations, Part 121, as a scheduled passenger flight from Chicago, Illinois, to Bradley International Airport.

We'll take up the approach just as the autopilot captures the final approach fix altitude:

The autopilot captured the airplane's altitude at 2,000 feet, prior to their arrival at the final approach fix, named DILLN, which was 5 DME from the VOR. After passing DILLN, the captain told the first officer to set the missed approach altitude of 3,000 feet in the flight guidance control panel 9 (FGCP). He began the descent to the minimum descent altitude (MDA) of 908 feet above the field elevation, using the VERT SPD mode of the autopilot. At 0054:22, the captain asked the first officer to "give me a thousand down."

American Airlines, at the time of the accident, was the only U.S. airline that used QFE for takeoff, departure, approach, and landing. That is why they used a MDA of 908 feet. (908 + 172 = 1,080) I hear they went to the U.S. industry standard QNH sometime after this mishap.

Investigators found both engines had ingested parts of trees and the left engine compressor stages were damaged by impact from the stators.

In summary, regardless of the outdated altimeter setting that affected the indicated altitude that the flightcrew observed, they allowed the airplane to descend about 309 feet below the indicated MDA for the instrument approach. The captain initially did not recognize the descent below MDA, and he failed to react immediately when he was alerted to the altitude deviation by the first officer. The Safety Board concludes that the flightcrew's failure to maintain the required MDA until the required visual references identified with the runway were in sight directly caused this accident.