We tend to focus our simulator training on engine failures, systems-related emergencies, and the obvious weather challenges. Weather in the simulator is usually summed up by "hot and heavy" or "ice and rain." We don't do a lot of realistic crosswind training and probably none of that realistically deals with gusts. Wind shear training boils down to a series of programmed problems. In other words, we train to what we are technologically able to train to in the box. 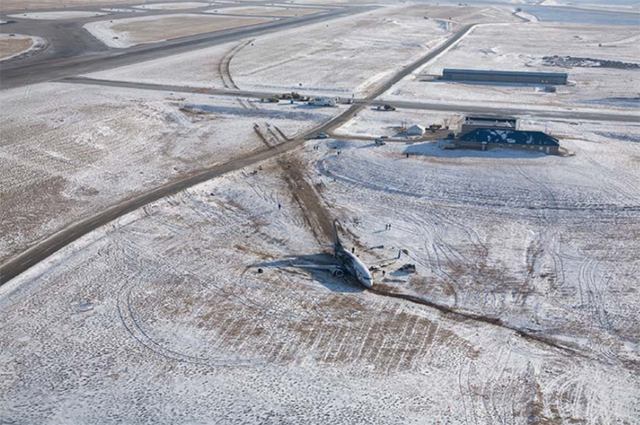 This mishap was caused by a captain who had a lack of finesse with the rudder on a very gusty crosswind which increased unpredictably due to windshear. The crosswind, the gust, the wind shear should not have ended up with the aircraft departing the runway laterally. A pilot with a reasonable amount of experience should have been able to handle it all. But we never test our captains under realistic conditions because we don't know how to do that in a simulator. We simply hope the pilot has seen enough of this before we hand him or her the keys to a multi-million dollar jet and the lives of passengers. The only solution would seem to be this: experience. But if you lack that experience, perhaps researching a few mishaps and talking to pilots who have this under their belts. My advice (for what it is worth):

One last note. The captain had a very good record and was probably genuinely surprised by the outcome of this takeoff. It is vitally important that we pilots acknowledge the fact we "don't know what we don't know." We must always be in learn mode and the best way to do that once you think you have the game mastered, is to research mishap reports from other pilots who also thought they had the game mastered. 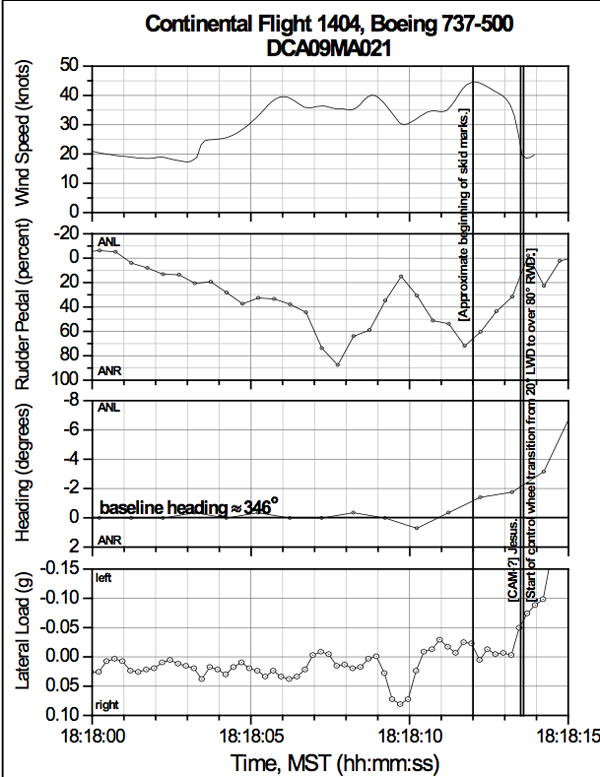 The 90.9 refers to the engine takeoff setting.

The NTSB report notes the pilot over corrected during his first application and then took out too much rudder. Things were complicated by the fact the gusty winds were changing during these rudder inputs. But even if the winds were steady, the rudder movement shows very poor technique. For a steady crosswind pilots should apply a little less than they think necessary and wait. If more is needed it can be, if less is needed a portion of the amount used should be taken out, not all of it. For a gusty crosswind these techniques are even more important. With the reduction from most of the rudder to almost none of the rudder, the pilot also risks a rapid rudder reversal which can overstress the vertical fin.

The control wheel input to the right is an indication of panic.

More about this: Panic.

The captain had a flawless record, but we don't know about his gusty crosswind capability. Simulator technology doesn't really test pilots realistically and it isn't a training item in most curricula.

When Federico Peña became Mayor of Denver in 1983, he set out to close Stapleton IAP in an effort to have the city buy land owned mostly by his family for a new airport. Thus Denver's main airport went from what many considered the epicenter of wind shear activity in the United States to an even worse location. To its credit, the FAA has been pouring windshear detection equipment into the airport.

At the NTSB’s request, the National Center for Atmospheric Research (NCAR) conducted an in-depth review of the wind data reported by DEN LLWAS sensors around the time of the accident. NCAR produced an animation showing the LLWAS-recorded winds between about 1813 and 1823, which indicated that the winds across the airport were not uniform; the animation showed a band of strong westerly winds over the central portion of the airport, with lighter winds to the north and south. In their review of the accident-related wind data, NCAR personnel emphasized that, because the LLWAS wind samplings do not record wind gusts that may occur during the 10-second intervals between recorded samples, it is likely that peak wind gusts were stronger than the winds that were depicted.

One can debate the tower's role in runway selection and the role they played in providing wind information that may not have been the most pertinent of several to choose from. The winds were changing so rapidly it may not have made a difference, given the captain's stick and rudder performance. (More about that soon.)

The NTSB concludes that mountain wave conditions were present at the time of the accident and resulted in strong westerly winds and very localized, intermittent wind gusts as high as 45 knots that crossed the airplane’s path during the takeoff ground roll.

The first of the captain’s large right rudder pedal inputs resulted in an apparent overcorrection of the airplane’s heading after about 1.5 seconds. Because the captain had no way to distinguish the effect of his inputs from the effect of the variable crosswind component, he likely believed that this large right rudder pedal input exceeded the amount of rudder correction that would be required to compensate for the crosswind.

Basic air traffic procedures for runway selection contained in FAA Order 7110.65 state that, “except where a runway use program is in effect,” ATC personnel should use the runway most nearly aligned with the wind unless use of another runway “will be operationally advantageous, or is requested by the pilot.” DEN ATC did not have a formal runway-use program; however, according to DEN ATC management personnel, they had an unofficial runway-selection policy, which would use the runway configuration that provided the greatest operational advantage for the airport at crosswind speeds up to 20 knots. This unofficial policy also indicated that DEN ATCT personnel were to consider using a different runway when requested by a pilot or when crosswind speeds exceeded 25 knots. Requests for alternate departure runways were rare at DEN and mostly occurred when crosswinds exceeded 30 knots.