Despite what Hollywood would have you believe, panic is actually quite rare in society. People, for the most part, are not prone to wildly screaming and running about, proverbial chickens with their heads cut off. Pilots, as a subset of society, tend to be even more level headed. But if you remove the hysteria and narrow the definition of panic to "fear causing people to either become afraid to act or prone to rush to do something without thinking first," well there is evidence we have had a fair amount of that in cockpits over the years.

If you have ever been faced with the fear of acting, the best solution is as near as the pilot sitting next to you. "What are our options?" is a good question to start with and the discussion can unfreeze your brain. If the other pilot has gone into Zombie mode, pick up the checklist and start browsing. Doing something, even reading, can get you unstuck.

What about the opposite problem, rushing to act before thinking?

For that I recommend you adopt what we used to do when airplane engines were prone to blow up and having a cabin fill with smoke was just another day at the office. You should catalog the complete list of things that require immediate action and then practice those until you can do them without fail. "Immediate" means within a second. For me, flying a Gulfstream G450, the list is only four items long:

So that's my list. I have the procedures down so there is no time to panic. I know that everything else gives me time (a few seconds, at least) to think things through and if I feel rushed I should tell myself to slow down.

So I don't see a reason to panic. Ever. Here are two opportune times not to panic:

There are other excellent times not to panic, but these are a few that seem to give some pilots problems. For these two, however, there are solutions: Preventing Panic.

2 — A good time not to panic: engine failure 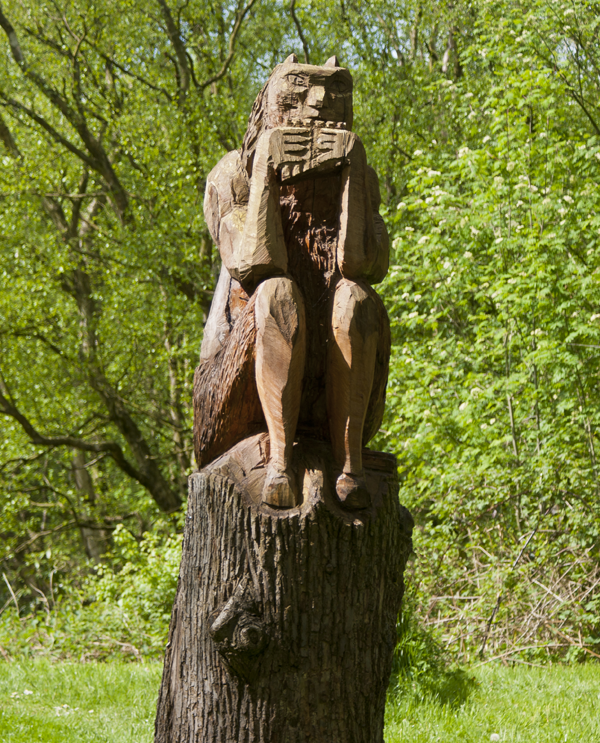 There are some who say the word "panic" came from the Greek shepherd god Pan, who took delight at frightening herds of goats and sheep into sudden bursts on uncontrollable fear. That seems to fit with the current definition . . .

We seem to think people are predisposed to panic, as if only a hair trigger lies between serene calm and pure pandemonium. We have been told, for example, the 1938 radio adaptation of the H. G. Wells novel "War of the Worlds" led to panic across the country. Really?

[A] study by Cantril (1940) on reactions by Americans to a nationally broadcast radio show supposedly reporting as actual fact an alien invasion from Mars. The study takes the view that those who panicked upon hearing the broadcast lacked "critical ability." The behavior was seen as irrational. While even to this day this study is cited as scientific support for this view of panic, the research has come under sharp critical scrutiny. Analysts have noted that even taking the data reported at face value, only a small fraction (12%) of the radio audience ever gave even any remote credence to the idea that the broadcast was an actual news story.

More about this: American Airlines 1420.

It seems the stereotypical view of panic — people running about, screaming, throwing loved ones over board in a blind attempt at self preservation — that is extremely rare. But the definition of the word — a fear that makes someone unable to act or think normally and to cause them to rush to do something — that fits what we see in some aircraft mishaps. There are examples of panic on flight decks.

A good time not to panic: engine failure 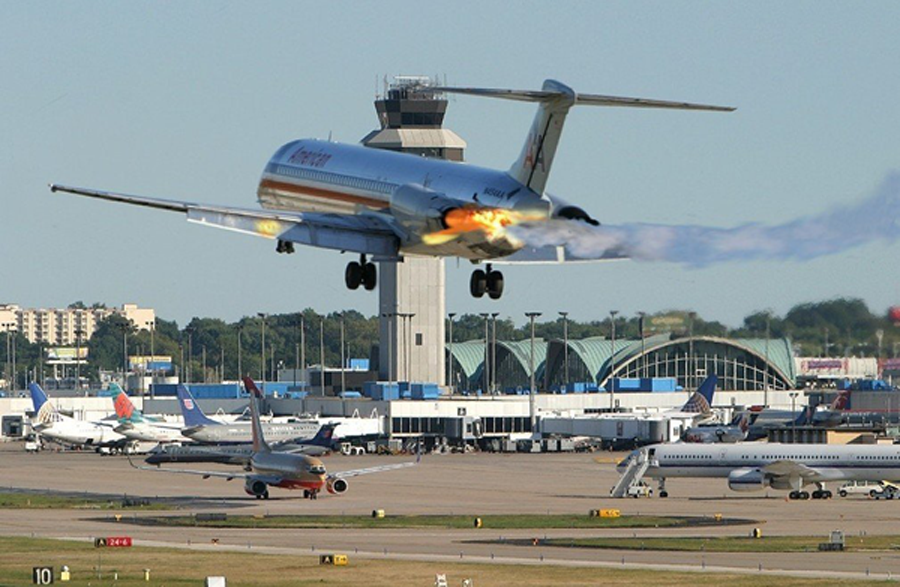 One of the few drawbacks of training exclusively in a simulator is pilots can compartmentalize their emergency procedures for the box and their normal procedures for the airplane. We see case after case of pilots who can ably handle an engine failure in a simulator failing to do so in the airplane. I must admit to being in the generation where we practiced these things in airplanes. So when it happened to me in real life (three times on takeoff and twice that many when en route), it was not really a big deal. So let's make this clear for anyone who has never had an engine failure in an actual airplane . . . if you've got more than one engine, losing one is not a time to panic.

As of 11 March 2015, the Aviation Safety Network database shows 17 occurrences of wrong engine shut downs in the last 69 years. There were just as many in the last half of that period as the first. Here are a few of the more recent ones.

1992 Apr 22 — A de Haviland DHC-6-200, N141PV, departed Perris, CA after having been serviced with contaminated fuel. Immediately after takeoff the right engine lost power. The NTSB findings: The pilot in command's inadvertent feathering of the wrong propeller following an engine power loss, and the failure of the operator to assure that the pilot was provided with adequate training in the airplane. [Source: NTSB LAX92MA183]

1995 Jul 19 — A privately owned DC-3 was crashed after its right engine failed and the left engine was shut down. Only the pilot in command was killed. [Source: NTSB Narrative NYC95FA167]

1995 Dec 5 — A twin-engine Tupolev 134B-3 operated by Azerbaijan Airlines crashed during its initial climb after the left engine failed and the crew shut down the right engine. The copilot was flying when the left engine failed and countered the yaw and roll just as the flight engineer reported that it was the right engine. The captain assumed control and ordered the right engine shut down. The engineer shut the engine down, realized that it was the operating engine and attempted a relight. 52 of the 82 on board were killed. [Source: Aviation Safety Net]

2001 Aug 29 — A twin-engine CAS CN-235-200 operated by Binter Mediterraneo crashed on approach to Malaga Airport, Spain. During the approach a left engine fire light was noted by the crew. They ended up shutting down both engines and descended into the approach lights, killing 4 of 37 on board. [Source: Aviation Safety Net]

How to survive an engine failure on a multi-engine airplane

A transport category airplane certified under 14 CFR 25 is designed to fly with the critical engine out, so if anything kills you, it is probably you. The two most likely ways for that to happen is when you (a) apply the wrong rudder, or (b) shut down the wrong engine. Too many pilots think of an engine failure as a macho test of speed to see who can get the rudder in so fast that other pilots don't even notice the yaw. If the airplane doesn't have time to yaw, you aren't doing it right. Now all of my engine failure experience has been in two or four-engine jets. You should practice this in a simulator, but this has always worked for me:

I've lost engines at V1 three times, en route another six times. I've never had one that required an instant reaction and I let one burn for about three minutes before getting around to shutting it down. Of course your airplane might be different and I suggest you try my "step on the low hand" technique in the simulator. There may be times when getting it done ASAP might be the right thing to do, but I think I will recognize that if it ever comes. For now, my approach is to be methodical about engine failures.

More about this: Asymmetrical Thrust.

A good time not to panic: stalls 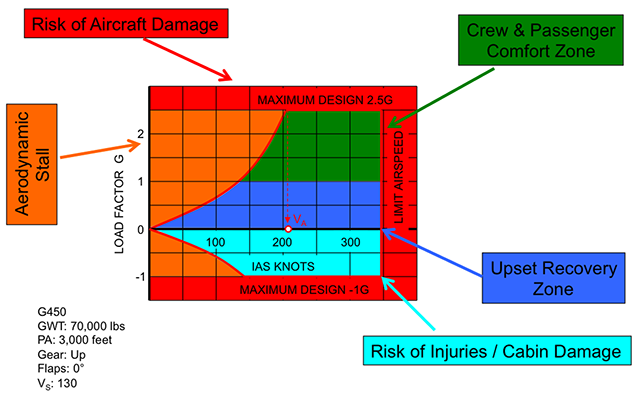 If you have been flying for less than thirty years, you may have never stalled an airplane requiring a type rating. We have generations of pilots raised in simulators that make that kind of training unnecessary. That is probably a good thing, but it may also further the "simulator is for abnormals, airplane is for normals" mentality that creates panic when it happens in the airplane. We've also had decades of stall training that emphasized minimal loss of altitude when in fact the clarion call of any stall is to reduce angle of attack. Plainly stated, you must quickly and aggressively push forward to unload the wing and resume flying.

Every few years there is another accident caused by professional pilots either reacting incorrectly to a stall or placing a perfectly good airplane into a stall. The official blame usually has to do with poor pilot training but in some cases the pilot was trained repeatedly in a simulator and failed to apply that training in the airplane. Simulator training in the past was meant more to pass check ride altitude standards than to stress the need to break the stall above all else.

How to survive an aerodynamic stall

Your prime directive when faced with an aerodynamic stall is the get the wing flying again and that means you have to decrease the angle of attack. The best way to do that is to decrease pitch and that is going to take a conscious push forward on the yoke for most aircraft. Don't play around, give it an aggressive push. Try this in the simulator on approach at an MDA around 500 feet AGL: get the airplane to its initial stall warning and recover with a good healthy push. See how much altitude it takes. Not much, eh? Now try that again with the next level of stall warning, perhaps the stick shaker. And that leads us to . . .

Do not override the stick pusher. Let it do its job, break the stall. More about this: Low Speed Flight and Stall Recovery.

Not all stalls happen low to the ground or with the nose just above or below the horizon. Remember that stall speeds are determined by aircraft weight, altitude, and G-loading. Yes, you can lower your stall speed significantly by flying the airplane at less than 1-G.

The best way to avoid panic in a given situation is to experience that situation a few times. One of my rules of life: "A practiced calm will serve you well." Practice calm? Yes. After a while, you will find the ability to remain calm in one situation (a car accident, let's say) transfers to others. So how about our two examples of when not to panic?