I don't mind admitting it, the KC-135A was one of the most difficult to fly airplanes — stick and rudder — I've ever touched. It had negative directional stability, had a pitch tolerance of 1/2 degree on takeoff at maximum weight, and many of the techniques required to fly it well were counter intuitive. The Air Force has since fixed everything with bigger engines and a yaw damper, but in 1985 the KC-135A was a beast to fly. That being said, if you knew what you were doing, it could be flown safely. 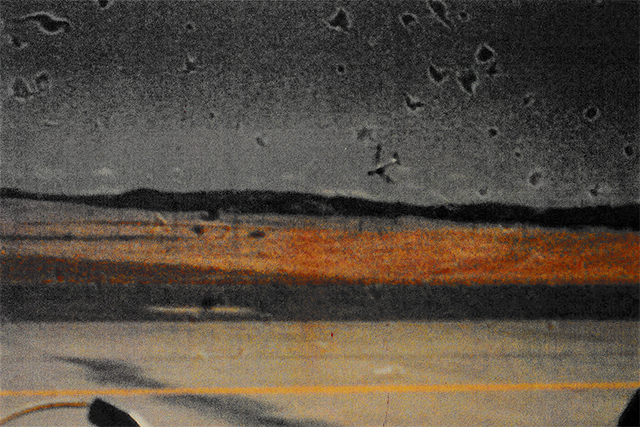 At the time of this crash I was flying an EC-135J, a Boeing 707, with almost identical flight characteristics. While we were about 50,000 pounds heavier and had larger, more powerful engines, the flight controls were about the same. We knew the stick and rudder skills required were high. The problem in the KC-135 tanker community was that the experience level was very low and many of their instructor pilots may have had fewer than 2,000 hours total flying time. This particular instructor pilot had just over 2,700 hours total flying time and was considered very experienced. He was in a tough situation though, and forgot the number one rule of aviation: fly the airplane.

At traffic pattern weights the KC-135 could fly a very long time with an engine out and no rudder input at all. But it would not fly if you got it too slow, especially with asymmetric thrust. The KC-135A did not have a flight data recorder and much of the post accident analysis is speculation. My take: the copilot bounced the airplane hard enough with enough yaw to take out an engine. The instructor took over and managed to get the airplane airborne but he got too slow. I flew over the crash site two days later. It wasn't much larger than the wing span of the airplane.

Just before the crash, back in Hawaii, we had a pilot smash in the wrong rudder and almost invert an airplane 200' above a pineapple field. We came up with our own solution for dealing with an engine failure: do nothing. We started teaching (and practicing) the following:

I've used the method ever since and have lost a few engines in that time. The method works.

Years later I was in a simulator course where the airplane's critical engine was the left and the instructors always failed the left engine on takeoff because that's what the check airman was going to do. I used my method and the instructor would say "not bad." My flying partner always got the rudder in so fast you never saw the nose track. "Perfect," the instructor would say as the student beamed at showing up the old man (me). "How can you be sure you got the correct rudder?" I asked. She said she felt the yaw. I talked the instructor into failing the right engine instead of the left without warning her. She mashed down on the right rudder, as always, and five seconds later we were dead, in simulator hell. She was furious and has never talked to me since. She is now an airline captain and I hope she never loses an engine.

Back to this crash . . . we gave our KC-135A instructor pilots nearly impossible tasks with this airplane. They had to teach 22-year old copilots how to deal with Dutch Roll in just ten sorties and the only way to do that was to let them really get the airplane close to out of control very low to the ground. A good instructor could get this pounded into these young pilots but had to take some risks doing so. Years after this crash the Air Force finally realized just how insane this is and installed yaw dampers and the entire problem went away. At the time of the crash, there were commercially available yaw dampers, stall warning systems, and stall barriers available for the KC-135A but the Air Force never installed them. If you ask me, this crash was caused by the Pentagon, not by a young copilot with barely 200 hours in his logbook or an instructor pilot with the nearly impossible task of training him.

I get emails from friends and families of this instructor pilot now and then, see below for just one of them. It sounds like he was a great pilot, officer, and person. The Air Force, for its part, got the "findings" (causes) exactly wrong. I'll save my editorial comment for the Probable Cause section, below.

The flight was an S-2 student training sortie from Castle AFB. The crew consisted of an instructor team (instructor pilot, instructor navigator, and instructor boom operator) and a student crew (student aircraft commander, student copilot, student navigator, and student boom operator). After four and one-half hours of flight, the aircraft entered the Beale AFB traffic pattern for practice approaches. During the third practice approach, the number one engine pod contacted the runway. The aircraft executed a go-around and visual left-hand pattern. During the turn to downwind leg, the aircraft impacted the ground approximately one mile east of the runway on Beale AFB. The aircraft was destroyed and all crew members were fatalities. 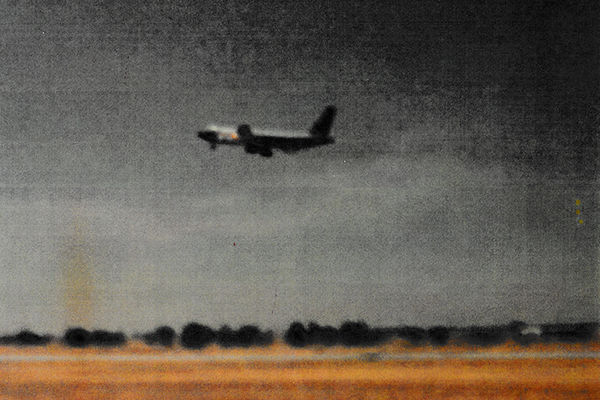 The student copilot appeared to have lost lateral control while attempting to land, to the point the left (number one) engine contacted the runway. The Dutch roll of this airplane in the landing flare is excessive and in today's Air Force would be considered unsafe. An instructor had to let the student get to very large bank angles in an effort to teach the correct aileron technique.

Initial speculation pointed to a possible wrong-rudder input, but that can't be true because the aircraft appears to have achieved wings level flight.

Impact markings were found on the rudder balance panel arms indicating the rudder was approximately 9° right of neutral at impact. 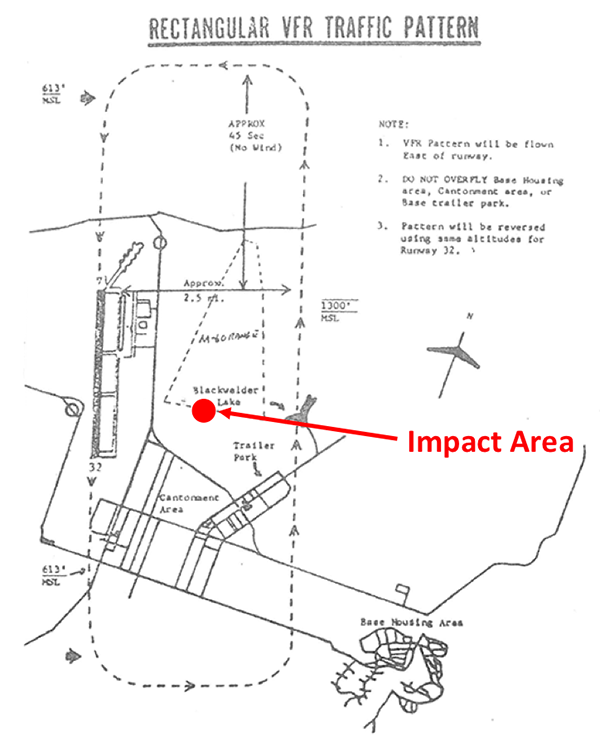 The aircraft was not equipped with a cockpit voice recorder or a flight data recorder, but it appears from photographic evidence and from the mishap report:

Of course all of this begs the question: why? To which I would say there are two 'whys' to answer:

Air Force mishap reports were written back then in what was supposed to be a sterile, just the facts, manner but had to emphasize the word, "fail." Somebody (not something) had to have failed for the mishap to have occurred. I've added several findings of my own because they serve us surviving pilots a cautionary tale. We have to assess the shortcomings of our airplanes and our operators before we can hope to address our ability to fly flawed machinery.

I am a retired Major, Instructor Navigator on KC-135A/Q/R.

He was one of the closest friends I ever had in my life.

After Altus, I flew KC-135 Q models with the Beale Bandits out of Beale AFB, refueling the SR-71 Blackbird and _____ became an Instructor Pilot at Castle AFB, CA.

At Beale, I met another lifelong friend who was an Instructor Navigator.

Late in August my Beale buddy called me from Castle and asked if I knew _____. I said yes and he said _____ was killed while training at Beale.

I wish I hadn’t, but your description of the mishap is accurate.

HERE IS THE RUB.

Beale’s north/south runway is 15, true heading 147.3 degrees. The variation at Beale is 14 degrees east, so that makes a compass heading of 133.

When I flew as crew or instructor at Beale we always briefed that, if a major problem occurred when taking off to the south, we would fly straight ahead, declare an emergency, and request approach to Castle AFB, 130 NM to the south. If we maintained a compass heading of 133 we would soon end up in the Sierra Nevada mountains, so, we said, “Fly due south and call Castle”.

I believe that the mishap aircraft took off from Castle, flew its training mission and was using the less congested airspace at Beale for touch and go training.

I doubt if the Castle crew, including 4 rookies, knew of the Beale briefed emergency procedures.

If I recall the accident report, _____ declared an emergency and asked for a closed pattern to return to RWY 15 (I am not sure of that, although they crashed on downwind).

The terrain at Beale rises 113 feet immediately east of the runway within the airfield boundary.

I believe _____ was flying with a rookie crew on their first transition flight into the type. The brand new copilot was flying his first attempted landing (as I recall).

They dragged the #1 engine which caught fire.

_____ was a go-getter and had little help on the flight deck. It seems he turned into a dead or failing engine and let his airspeed fall off.

There is a photograph of the plane just before impact at about 90 degrees left roll and maybe 40 degrees nose low.

One chilling item I wish I had not read was that the aircraft impacted at the pilot’s #2 window, right where _____ was sitting, and that the seventh crew member was identified by process of elimination. (I suffered from about a year of PTSD over that statement and the loss of the Challenger space shuttle in January 1986).

I hope this commentary is of some value and I am glad to get it off my chest at this late date.