If you've been blessed by flying only stable aircraft, much of this may be lost on you. If you are currently flying an aircraft that often misbehaves, you need to read this. In either case, knowing what makes an airplane stable helps to deal with the times it isn't.

Having grown up in two aircraft that had negative directional stability, the KC-135A and the Boeing 707, I became an expert at dealing with Dutch roll. Most modern aircraft have no dutch roll tendency at all, due either to superb design or superb yaw dampers. If your aircraft has a yaw damper, or more than one in some cases, you might want to be familiar with how to get out of a dutch roll when the yaw damper isn't working.

Imagine a marble in a bowl which is perfectly rounded, inside and out. The marble tends to gravitate to the bottom and stay there. If the marble is pushed to one side, it will roll back to the center, perhaps overshooting but eventually returning to its original state in the center. The marble is said to have positive static stability.

I've heard that the U-2 has superb longitudinal stability. If you trim the airplane and push the yoke forward or aft, it will easily return itself to the original pitch. It has good static pitch stability. 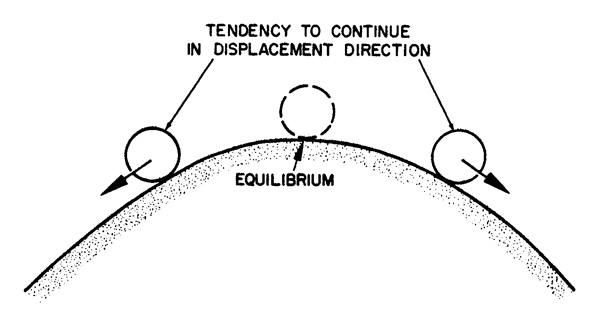 Now consider the same marble atop the same bowl inverted. The marble sits up there precariously and even the slightest force will cause it to move away from the center, its state of equilibrium. Not only does the marble move, it continues to move. The marble is said to have negative static stability.

The early KC-135As had terrible Dutch roll tendencies. If you had the aircraft in trimmed, level flight and let go of the ailerons, they would induce an oscillating roll on their own. The airplane had negative lateral stability.

A final case of static stability places our marble on a perfectly flat, frictionless surface in a vacuum. (Ridiculous, I know, but that's how engineering professors think.) If you push the marble in any direction, it will move and continue to move. 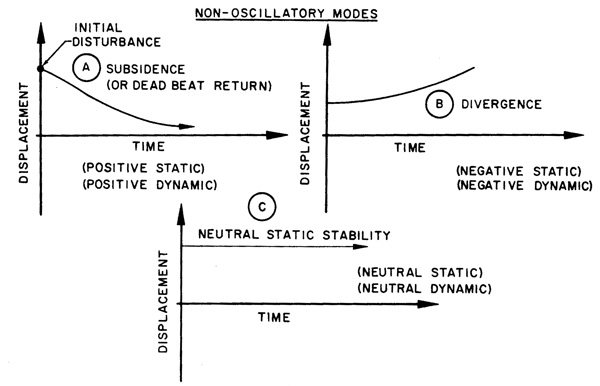 If the dynamic motion is in agreement with the static tendency, you have a non-oscillatory stability. 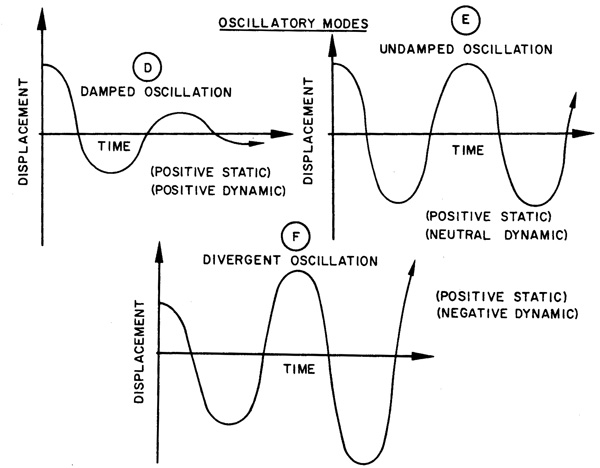 If the motion oscillates but gets smaller over time, you have positive static and dynamic stability.

If the motion oscillates but gets greater with time, although you had positive static stability this was only the initial tendency. You will have a negative dynamic stability.

If the motion oscillates without end at the same magnitude, your initial static stability as been countered with negative dynamic stability.

You have dynamic stability if the amplitude of any oscillations dampen out with time. These are further classified as "stick fixed" or "stick free." A stick fixed condition is where the controls do not move freely in response to air loads. Most aircraft with hydraulically actuated controls are stick fixed and should exhibit greater stability. A stick free airplane is one that will allow control movement in response to air loads, gusts, or other stimuli.

The phugoid oscillation is one where the airspeed, pitch, and altitude of the airplane vary widely, but the AOA remains nearly constant. The motion is so slow that the effects of inertia forces and damping forces are very low. The whole phugoid can be thought of as a slow interchange between kinetic and potential energy. 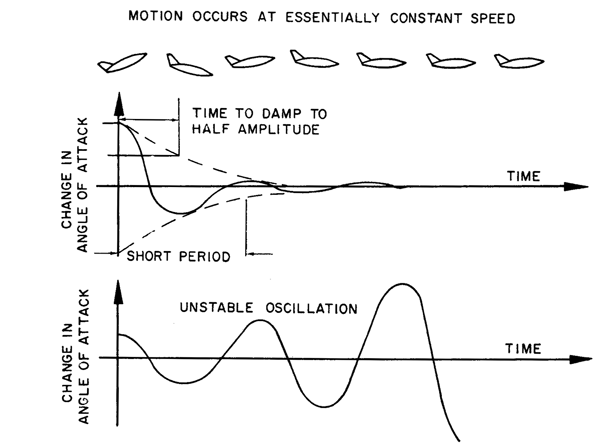 The short period mode is always heavily damped and, if no pilot inputs are made, the oscillations will dampen out rapidly. The short periods correspond closely with the normal pilot response time, and there is the possibility than any attempt to dampen out these oscillations may actually reinforce them and produce instability. This lead to pilot induced oscillations (PIO), which can destroy an aircraft in a matter of a few seconds. Should such an oscillation develop, usually as a result of sharp gusts, the best procedure is to release the controls and allow the natural damping of the aircraft to take over. A positive control force will also eliminate the PIO. The impulse to steady the aircraft should be avoided in all cases. 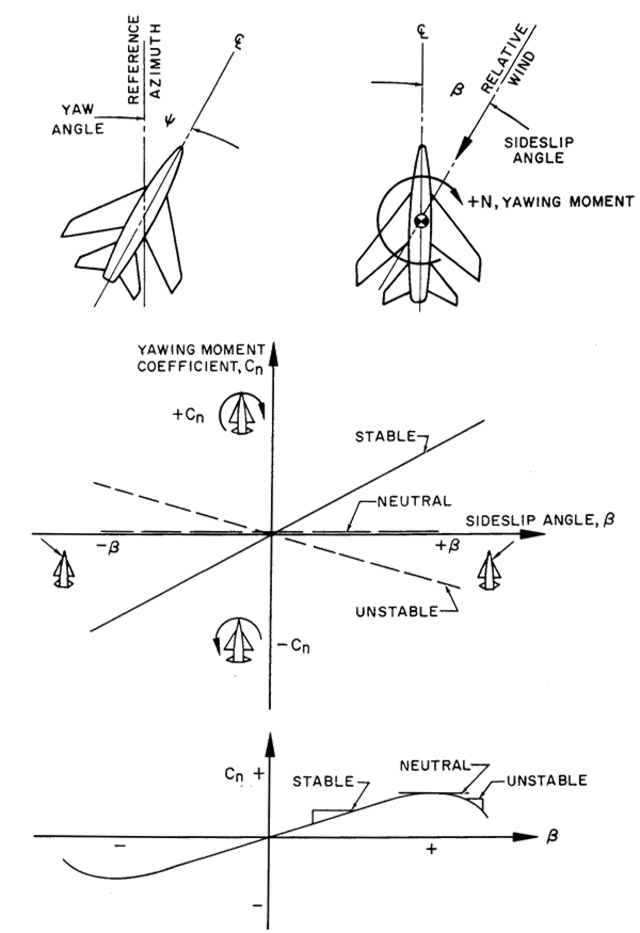 A dutch roll is a combination of yawing and rolling motions where the rolling motion continuously reverses itself with less noticeable yaw moments unless the rolling is significant. It is better called "oscillatory stability." The aircraft's spiral stability — its tendency to return to wings level when the ailerons are released — and its oscillatory stability are always in conflict. One factor makes the aircraft maneuverable, the other makes it stable. 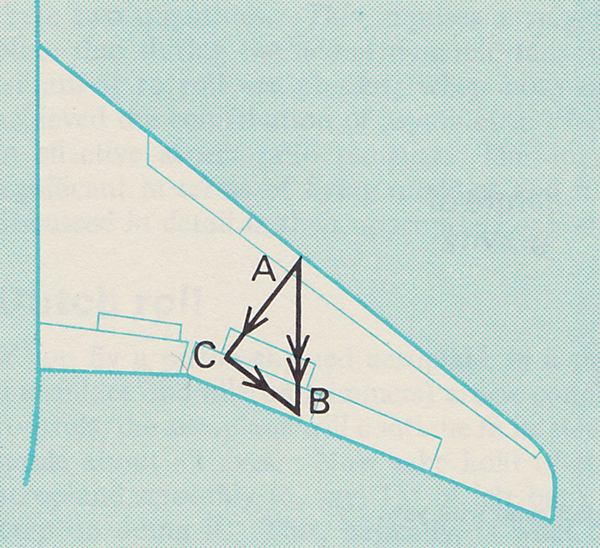 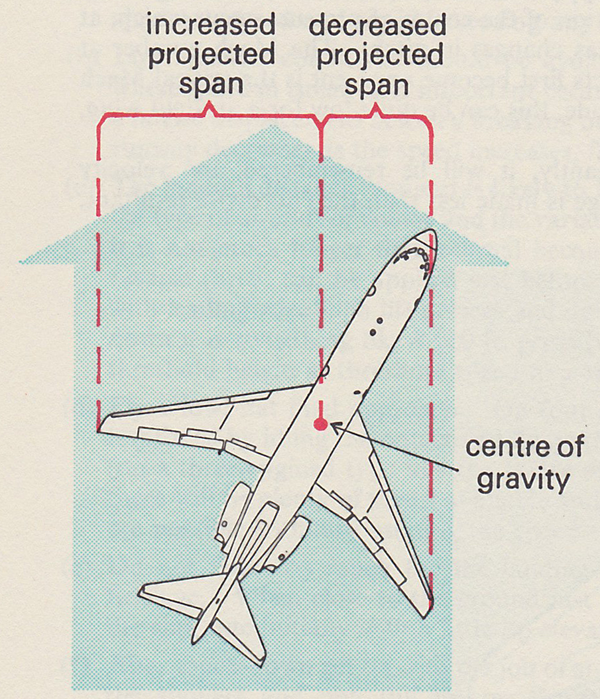 Neutral stability is safe (enough) because it won't get worse, but undesirable because, if the amplitude is large, or the frequency is small, the aeroplane is tiring and tedious to fly.

Negative stability is potentially dangerous because sooner or later, depending on the rate of divergence, the aeroplane will either get out of hand or demand a constant very high level of skill and attention to maintain control. The unstable case, however, needs to be qualified in this way: if the divergence is very slow then it can be tolerated. To the pilot there is no significant difference between a dutch roll which is only very, very slowly divergent over one which is truly neutral.

For most pilots, manually damping a dutch roll is either a theoretical exercise or a simulator demonstration. For many of us, however, it was a daily survival drill. So here is the theory followed by the actual procedure for the Air Force Boeing 707 (EC-135C).

The control of a divergent dutch roll is not difficult so long as it is handled properly. Let us assume that your aeroplane develops a diverging dutch roll. The first thing to do is nothing — repeat nothing. Too many pilots have grabbed the aeroplane in a rush, done the wrong thing and made matters a lot worse. Don't worry about a few seconds delay because it won't get much worse in this time. Just watch the rolling motion and get the pattern fixed in your mind. Then, when you are good and ready, give one firm but gentle correction on the aileron control against the upcoming wing. Don't hold it on too long — just in and out — or you will spoil the effect. You have then, in one smooth controlled action, killed the biggest part of the roll. You will be left with a residual wriggle, which you can take out, still on ailerons alone, in your own time. 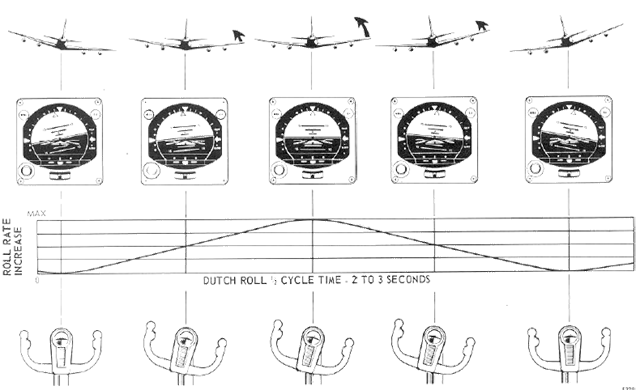 Manual damping of dutch roll is accomplished with the lateral controls only. As a first approximation, use a control wheel input roughly equal to the degree of oscillation. For example, if the bank angle oscillations are +/- 10°, use about 10° of control wheel. Lateral control inputs should not be large and should be centered quickly as the rolling motion stops. If the input is held too long, it may excite another large oscillation in the opposite direction. Several cycles may be required to damp out Dutch roll. The next lateral control input should be delayed until the start of the next bank oscillation and then be applied to stop the rising wing, quickly centering the wheel as the roll stops.