The reference stall speed is what ends up producing many of the numbers that matter to you, such as V2 and VREF. You should never see it in flight if you have a stick pusher, provided you allow the stick pusher to do its job.

The key takeaway from this discussion, however, has nothing to do with normal flight operations. You should note that VSR is measured during test conditions on a fully trimmed aircraft, 1-G flight, using a measured deceleration. If you are turning, decelerating more than 1 knot per second, or have any other conditions outside what the pilots used to produce these numbers, you aircraft is going to stall at a higher speed.

Before getting into the aero engineering, how about a Stall IQ test?

2 — What it really means

(a) The reference stall speed, VSR, is a calibrated airspeed defined by the applicant. VSR may not be less than a 1-g stall speed. VSR is expressed as:

is first a maximum during the maneuver prescribed in paragraph (c) of this section. In addition, when the maneuver is limited by a device that abruptly pushes the nose down at a selected angle of attack (e.g., a stick pusher), VCL MAX may not be less than the speed existing at the instant the device operates;

(b) VCL MAX is determined with:

(1) Engines idling, or, if that resultant thrust causes an appreciable decrease in stall speed, not more than zero thrust at the stall speed;

(2) Propeller pitch controls (if applicable) in the takeoff position;

(3) The airplane in other respects (such as flaps, landing gear, and ice accretions) in the condition existing in the test or performance standard in which VSR is being used;

(4) The weight used when VSR is being used as a factor to determine compliance with a required performance standard;

(5) The center of gravity position that results in the highest value of reference stall speed; and

(6) The airplane trimmed for straight flight at a speed selected by the applicant, but not less than 1.13VSR and not greater than 1.3VSR.

(c) Starting from the stabilized trim condition, apply the longitudinal control to decelerate the airplane so that the speed reduction does not exceed one knot per second.

(d) In addition to the requirements of paragraph (a) of this section, when a device that abruptly pushes the nose down at a selected angle of attack (e.g., a stick pusher) is installed, the reference stall speed, VSR , may not be less than 2 knots or 2 percent, whichever is greater, above the speed at which the device operates.

What it really means

VSR is a speed:

While VS is defined by 14 CFR 1.2 as "the stalling speed or the minimum steady flight speed at which the airplane is controllable," VSR is further defined as "not less than a 1-g stall speed. 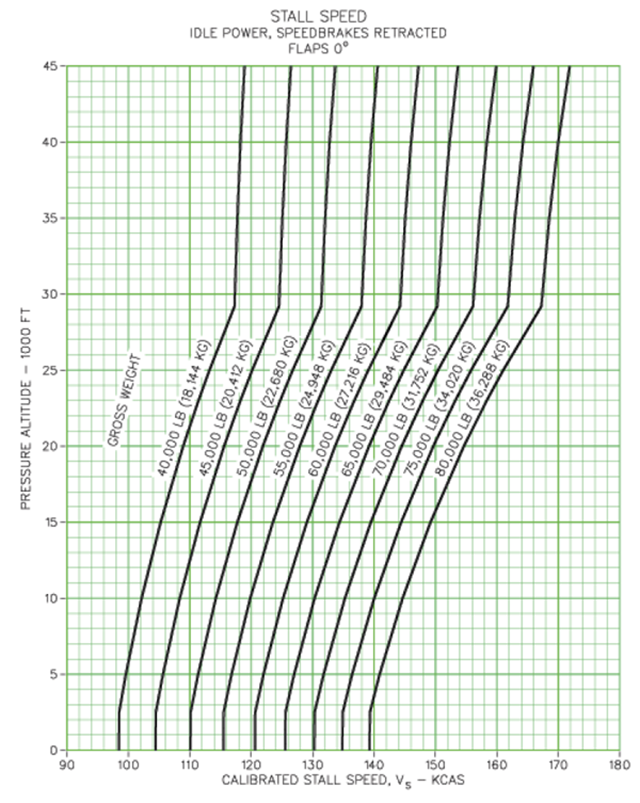 The G450, for example, provides several charts for VS at varying configurations at idle power as a function of gross weight and pressure altitude. While not specifically noted, these are presumed to be a 1-G flight which makes them the same as VSR.