In 1995, following a nearly catastrophic short landing off a VOR approach, American Airlines had to remind its pilots that "despite its name a non-precision approach must be executed with exacting precision." More about this: "American Airlines 1572. Those pilots were lucky they didn't kill anyone. We had been computing our own Visual Descent Points (VDPs) in the Air Force for over ten years at that point, but after the 1995 crash more and more operators adopted the VDP technique. More about this: Visual Descent Point (VDP). 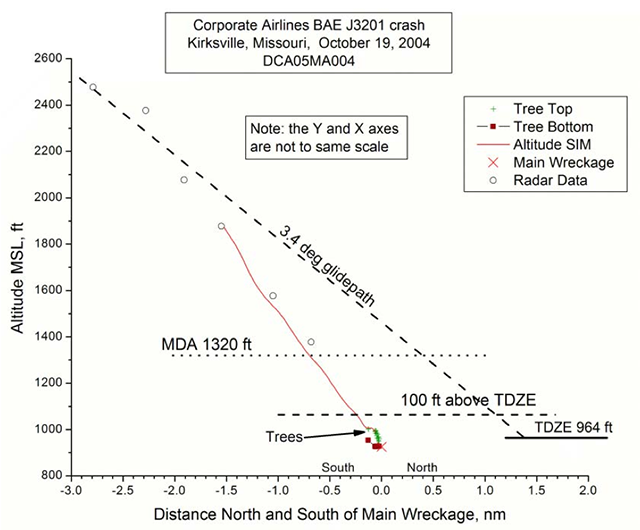 Nearly ten years after the American Airlines crash and twenty years after the VDP technique became publicized, this commuter operator killed nearly everyone onboard when the pilots displayed less than exacting precision and fell into a very easy trap set by all "non-precision" approaches in low visibility conditions. It is difficult to judge one's distance to the runway and without the requisite precision we are tempted to descend early. This crew impacted the earth 1.2 nautical miles short of the runway.

This aircraft was technology poor, but they had what they needed to compute a visual descent point and the techniques to do so were well known at the time. The crew's joking banter prior to the instrument approach may appear harmless, but it sets the wrong tone for the serious work ahead of them. Finally, the first officer missed several opportunities to call for a go around when he lost sight of the runway below the minimum descent altitude. One of the ironies of this mishap is that 28 minutes before their deaths, both pilots were talking about hating pilots who "take themselves too serious." In the end, they didn't take what they were doing seriously enough; a more serious application of call outs would have saved them. See "CVR extract," below. You could argue these pilots were guilty of more than just complacency, they were guilty of manslaughter.

There is absolutely no need to "dive and drive" on these non-precision approaches and even if you are flying an aircraft with the bare minimum in avionics, you can and should fly a continuous descent final approach. More about this: Continuous Descent Final Approach. 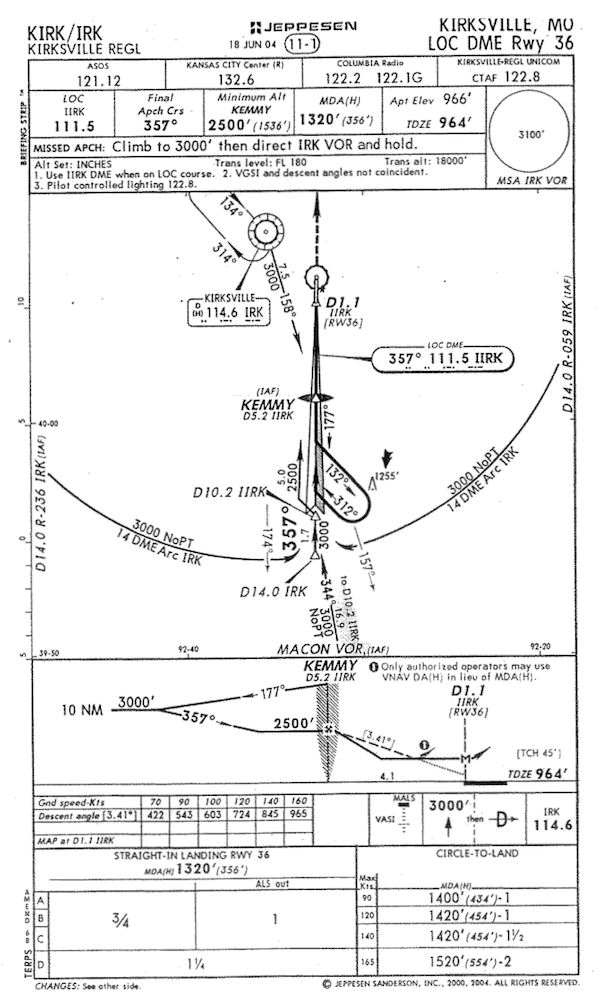 On October 19, 2004, about 1937 central daylight time, Corporate Airlines (doing business as American Connection) flight 5966, a BAE Systems BAE-J3201, N875JX, struck trees on final approach and crashed short of runway 36 at the Kirksville Regional Airport (IRK), Kirksville, Missouri. The flight was operating under the provisions of 14 Code of Federal Regulations Part 121 as a scheduled passenger flight from Lambert-St. Louis International Airport, in St. Louis, Missouri, to IRK. The captain, first officer, and 11 of the 13 passengers were fatally injured, and 2 passengers received serious injuries. The airplane was destroyed by impact and a postimpact fire. Night instrument meteorological conditions (IMC) prevailed at the time of the accident, and the flight operated on an instrument flight rules flight plan.

We'll take up with the accident report as the aircraft begins their approach to take specific notice of the demeanor of the pilots as they begin an instrument approach into fairly marginal conditions. The less than professional nature of the captain's chatter sets the tone that later ends with both pilots failing to fly the procedure correctly. The type of procedure is often called a "non-precision approach" because it lacks precise vertical guidance. It does, however, demand precision flying.

While 3.41° makes for a steeper than normal glide path, it would not have required more than 700 fpm to descend precisely from the final approach fix to the runway. Under "dive and drive" techniques, however, most pilots are predisposed to descend more quickly to maximize their chances of seeing the runway. This technique works, except pilots must display a great deal of skill and discipline to level the aircraft at the MDA and keep it there until the runway is in sight and the airplane is on a normal glide path.

At 1936:33.9, as the airplane descended through about 1,380 feet msl, the first officer stated "thirteen twenty." The captain thanked him and about 3 seconds later (as the airplane reached the MDA), stated, "I can see ground there." As he finished speaking, the GPWS annunciated, "minimums, minimums," indicating that the airplane had reached 1,320 feet msl. Calculated FDR data indicated that the airplane continued to descend at a rate of about 1,200 fpm. At 1936:40.5, the captain asked, "what do you think?," and the first officer responded, "I can't see [expletive]." About 2 seconds later, as the airplane continued to descend, the captain stated, "yeah, oh there it is. Approach lights in sight." Almost immediately, the GPWS annunciated "two hundred" feet agl and the first officer stated, "...in sight...continue." The airplane was descending through about 1,160 feet msl (160 feet below the MDA) at this time.

The correct call after the captain asked "what do you think?" while below the MDA without the runway in sight is "Go around."

As the pilots continued the approach, still descending about 1,200 fpm, the first officer asked the captain if he wanted the flaps extended to 35.° At 1936:52.2, the captain responded, "no," and the GPWS began to announce, "sink rate."20 One second later, the first officer exclaimed, "trees," and the captain stated, "no, stop." The first sounds of impact with the trees were recorded at 1936:55.2, and numerous sounds of impact were recorded before the CVR stopped recording at 1936:57.5.

Some pilots bristle at the idea of standardized call outs and hate flying with pilots who fly "by the book." One of the ironies of this mishap is it could have been prevented by a more disciplined approach to call outs. Here is an extract of the Cockpit Voice Recorder that sums up this pilot team's attitude. HOT-1 is the captain, HOT-2 is the first officer.