Korean Air and Asiana Airlines have a history of pilots unable to cope with approaches absent an electronic glide slope. But in most of their mishaps, including this one, a more robust CRM culture could have spared them the losses. 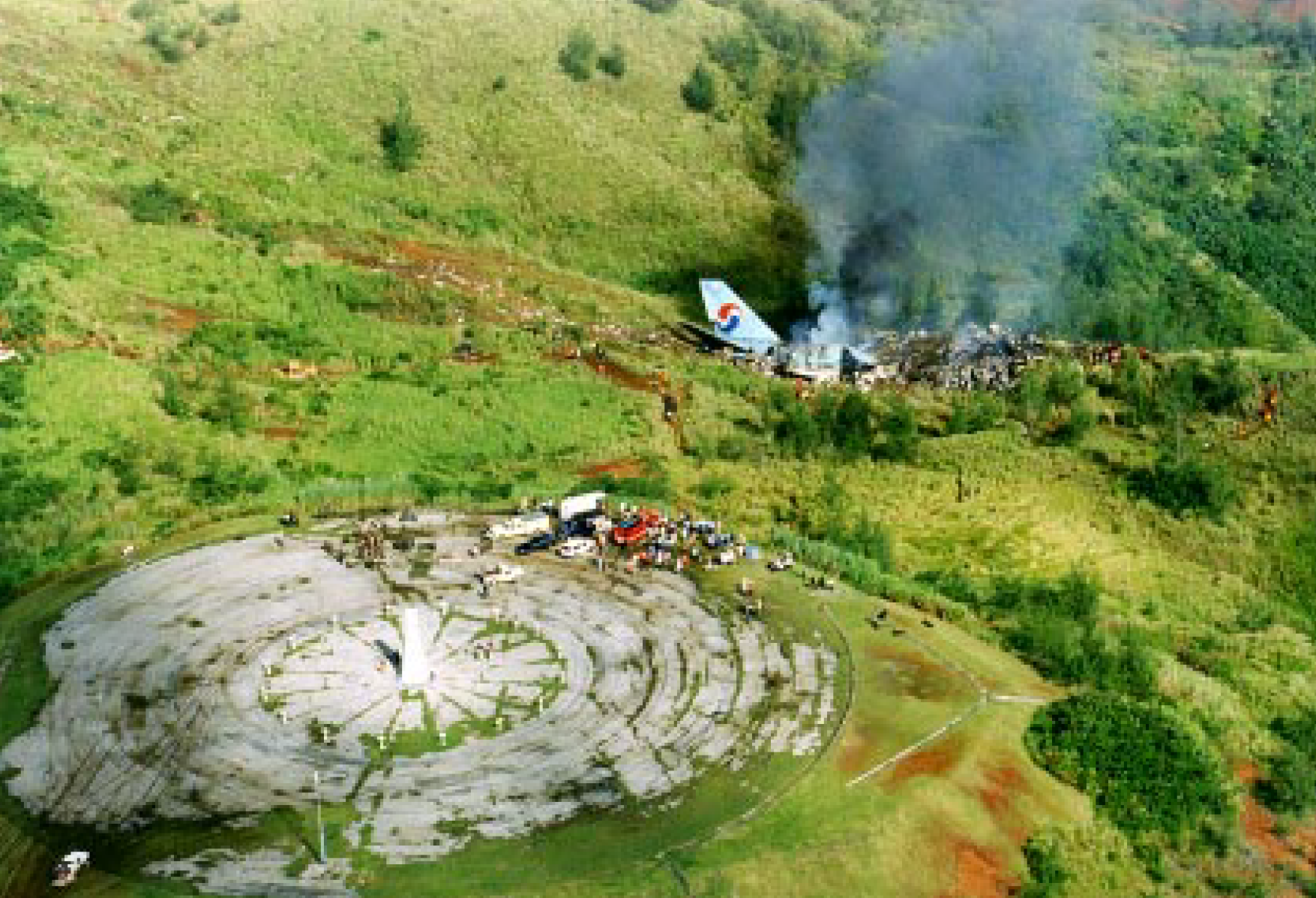 "Controlled Flight Into Terrain" is just the end result of this mishap. The circumstances that led to the CFIT serve as lessons to all pilots on multiple issues: 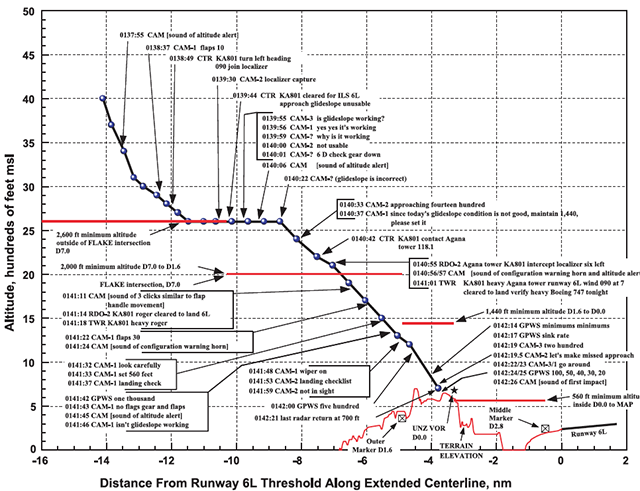 According to Korean Air company records, the flight crew arrived at the dispatch center in the Korean Air headquarters building in Seoul about 2 hours before the scheduled departure time of 2105 (2005 Seoul local time) on August 5, 1997. The original flight plan for flight 801 listed a different captain’s name. The captain aboard the accident flight had initially been scheduled to fly to Dubai, United Arab Emirates; however, because the accident captain did not have adequate rest for that trip, he was reassigned the shorter trip to Guam.

About 0113:33, the CVR recorded the captain saying, “we better start descent;” shortly thereafter, the first officer advised the controller that flight 801 was “leaving four one zero for two thousand six hundred.” The controller acknowledged the transmission.

The CVR recorded the captain making several remarks related to crew scheduling and rest issues. About 0120:01, the captain stated, “if this round trip is more than a nine hour trip, we might get a little something…with eight hours, we get nothing . . . eight hours

The captain spoke more than a few times during the descent about crew rest issues.

About 0121:59, the first officer stated, “captain, Guam condition is no good.” About 0122:06, the CERAP controller informed the flight crew that the automatic terminal information service (ATIS) information Uniform was current and that the altimeter setting was 29.86 inches of mercury (Hg). About 0122:11, the first officer responded, “Korean eight zero one is checked uniform;” his response did not acknowledge the altimeter setting.

According to the CVR, about 0139:55 the flight engineer asked, “is the glideslope working? glideslope? yeh?” One second later, the captain responded, “yes, yes, it’s working.” About 0139:58, an unidentified voice in the cockpit stated, “check the glideslope if working?” This statement was followed 1 second later by an unidentified voice in the cockpit asking, “why is it working?” About 0140:00, the first officer responded, “not useable.”

About 0140:06, the CVR recorded the sound of the altitude alert system chime. According to information from the flight data recorder (FDR), the airplane began to descend about 0140:13 from an altitude of 2,640 feet msl at a point approximately 9 nm from the runway 6L threshold (5.7 nm from the NIMITZ VOR). About 0140:22, an unidentified voice in the cockpit said, “glideslope is incorrect.” About 0140:33, as the airplane was descending through 2,400 feet msl, the first officer stated, “approaching fourteen hundred [feet].” About 4 seconds later, when the airplane was about 8 nm from the runway 6L threshold, the captain stated, “since today’s glideslope condition is not good, we need to maintain one thousand four hundred forty [feet]. please set it.” An unidentified voice in the cockpit then responded, “yes.” About 0140:42, the CERAP controller instructed flight 801 to contact the Agana control tower; the first officer acknowledged the frequency change. The first officer contacted the Agana tower about 0140:55 and stated, “Korean air eight zero one intercept the localizer six left.” Shortly after this transmission, the CVR again recorded the sound of the altitude alert chime, and the FDR data indicated that the airplane was descending below 2,000 feet msl at a point 6.8 nm from the runway threshold (3.5 nm from the VOR).

About 0141:01, the Agana tower controller cleared flight 801 to land. About 0141:14, as the airplane was descending through 1,800 feet msl, the first officer acknowledged the landing clearance, and the captain requested 30° of flaps. No further communications were recorded between flight 801 and the Agana control tower.

About 0141:53, the first officer again called for the landing checklist, and the flight engineer resumed reading the checklist items. About 0141:59, when the airplane was descending through 1,100 feet msl at a point about 4.6 nm from the runway 6L threshold (approximately 1.3 nm from the VOR), the first officer stated “not in sight?” One second later, the CVR recorded the GPWS radio altitude callout of “five hundred [feet].” According to the CVR, about 2 seconds later the flight engineer stated “eh?” in an astonished tone of voice

About 0142:05, the captain and flight engineer continued the landing checklist. About 0142:14, as the airplane was descending through 840 feet msl and the flight crew was performing the landing checklist, the GPWS issued a “minimums minimums” annunciation followed by a “sink rate” alert about 3 seconds later. The first officer responded, “sink rate okay” about 0142:18; FDR data indicated that the airplane was descending 1,400 feet per minute at that time.

About 0142:19, as the airplane descended through 730 feet msl, the flight engineer stated, “two hundred [feet],” and the first officer said, “let’s make a missed approach.” About 1 second later, the flight engineer stated, “not in sight,” and the first officer said, “not in sight, missed approach.” About 0142:22, as the airplane descended through approximately 680 feet msl, the FDR showed that the control column position began increasing (nose up) at a rate of about 1° per second, and the CVR indicated that the flight engineer stated, “go around.” When the captain stated “go around” about 1 second later, the airplane’s engine pressure ratios and airspeed began to increase. However, the rate of nose-up control column deflection remained about 1° per second. At 0142:23.77, as the airplane descended through 670 feet msl, the CVR recorded the sound of the autopilot disconnect warning. At 0142:24.05, the CVR began recording sequential GPWS radio altitude callouts of “one hundred . . . fifty . . . forty . . . thirty . . . twenty [feet].” About 0142:26, the airplane impacted hilly terrain at Nimitz Hill, Guam, about 660 feet msl and about 3.3 nm from the runway 6L threshold. FDR data indicated that, at the time of initial ground impact, the pitch attitude of the airplane was increasing through 3°. The accident occurred at 13° 27.35 minutes north latitude and 144° 43.92 minutes east longitude during the hours of darkness. The CVR stopped recording about 0142:32.

"Let's make a missed approach" certainly isn't very assertive. If it seemed the crew was reluctant to direct the captain to go around, that is a trend seen often in airlines of Korea.

The flight engineer, age 57, was hired by Korean Air on May 7, 1979. He was previously a navigator in the Republic of Korea Air Force. He obtained his flight engineer’s certificate on December 29, 1979, and was qualified on the Boeing 727 and 747 and Airbus A300 airplanes.

This was fairly typical for Korean Air to have former Republic of Korea Air Force pilots in the cockpit. Listening to the cockpit voice recorder of this and other Airlines of Korea accidents, you detect a definite command hierarchy reminiscent of pre-CRM cockpits in the rest of the world. The crew rarely challenged the captain's authority. 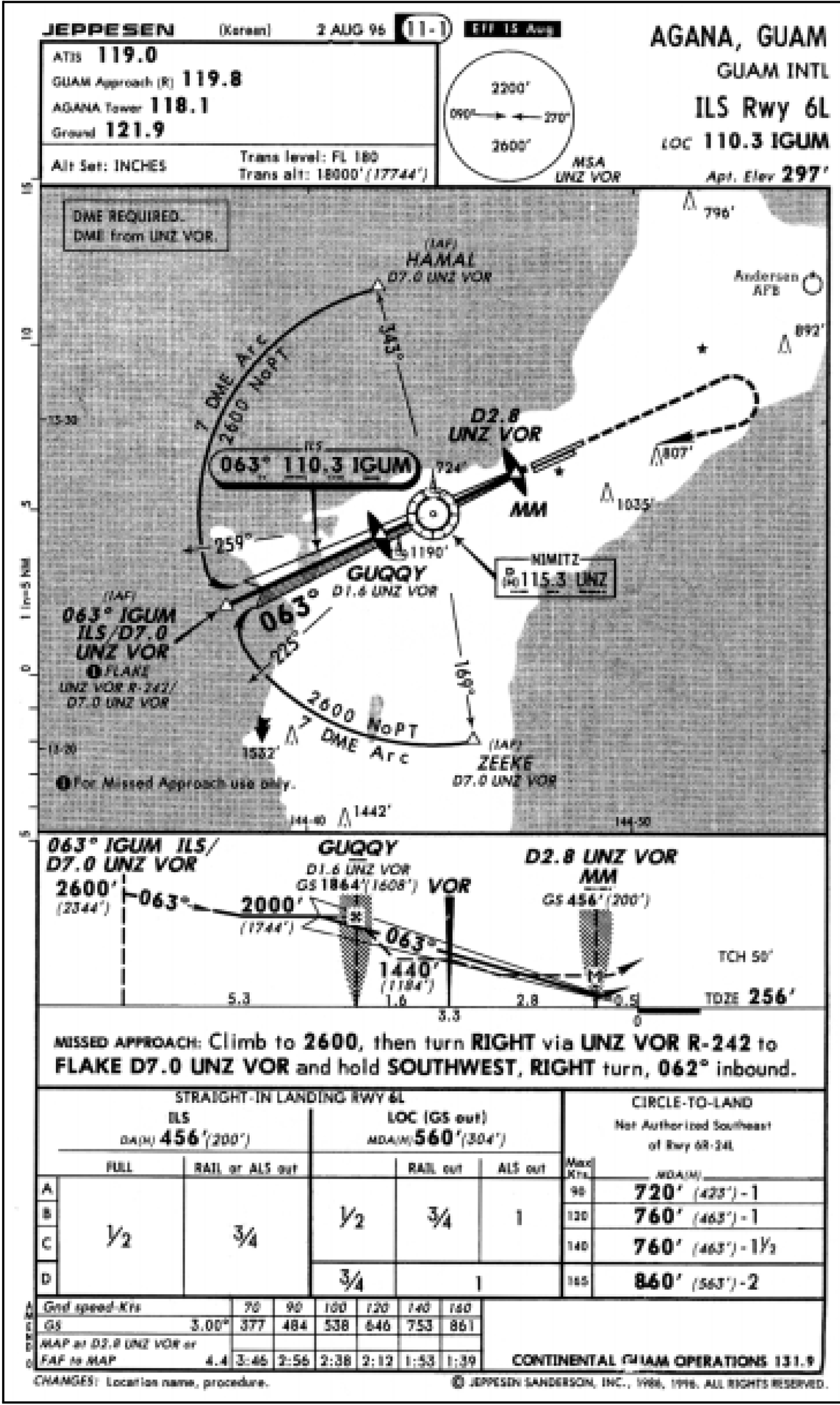 Instrument approaches available for runway 6L at the time of the accident were the ILS (localizer only, glideslope out of service), the VOR/DME, and the VOR.

The execution of the Guam ILS runway 6L localizer-only (glideslope out) approach requires the use of the NIMITZ VOR as a step-down fix between the final approach fix (FAF) and the runway and DME to identify the step-down points. The DME is not colocated or frequency paired with the localizer transmitter (which is physically located at the airport); rather, it is colocated and frequency paired with the NIMITZ VOR.

This can be surprising the first time you see it, provided you see it. Without an intelligent Vertical Navigation system, you must allow the autopilot to capture a new altitude before you give it the next altitude.

CVR information indicated that the captain briefed a visual approach in his approach briefing, which he referred to as a “short briefing.” However, the captain also briefed some elements of the localizer-only instrument approach, indicating that he intended to follow that approach as a supplement or backup to the visual approach. Specifically, the captain’s briefing included a reminder that the glideslope was inoperative, some details of the radio setup, the localizer-only MDA, the missed approach procedure, and the visibility at Guam (stated by the captain to be 6 miles). However, the captain did not brief other information about the localizer-only approach, including the definitions of the FAF and step-down fixes and their associated crossing altitude restrictions or the title, issue, and effective dates of the approach charts to be used. The Safety Board notes that the landing briefing checklist did not specifically require the captain to brief the fix definitions, crossing altitudes, or approach chart title and dates, although it would have been good practice to do so.

Regardless of the reason for failing to track the airplane’s position, the captain conducted the approach without properly cross-referencing the positional fixes defined by the VOR and DME with the airplane’s altitude. Therefore, the Safety Board concludes that, as a result of his confusion and preoccupation with the status of the glideslope, failure to properly cross-check the airplane’s position and altitude with the information on the approach chart, and continuing expectation of a visual approach, the captain lost awareness of flight 801’s position on the ILS localizer-only approach to runway 6L at Guam International Airport and improperly descended below the intermediate approach altitudes of 2,000 and 1,440 feet, which was causal to the accident.

I've noticed a trend with many accidents of the Airlines of Korea: their pilots seem to rely on an ILS glide slope so heavily that they fear a visual approach.

CVR evidence indicated that the flight crew seemed confused about, and did not react to, a series of audible ground proximity warning system (GPWS) alerts during the final approach. The first audible GPWS callout occurred about 0141:42, with the “one thousand [feet]” altitude call. A second GPWS callout of “five hundred [feet]” occurred about 0142:00 (when the airplane was descending through about 1,200 feet msl), to which the flight engineer responded in astonishment, “eh?” However, FDR data indicated that no change in the airplane’s descent profile followed, and the CVR indicated that the flight engineer continued to complete the landing checklist. Similarly, no flight crew discussion followed the GPWS callout of “minimums” about 0142:14, and the first officer dismissed a GPWS “sink rate” alert 3 seconds later by stating “sink rate okay.” About 0142:19, the flight engineer called “two hundred [feet],” followed immediately by the first officer saying “let’s make a missed approach.” The flight engineer immediately responded “not in sight,” followed by the first officer repeating “not in sight missed approach.” According to the CVR, a rapid succession of GPWS altitude callouts down to 20 feet followed, as the flight crew attempted to execute the missed approach.

The Safety Board was unable to identify whether the absence of challenges earlier in the approach stemmed from the first officer’s and the flight engineer’s inadequate preparation during the approach briefing to actively monitor the captain’s performance on the localizer approach, their failure to identify the errors made by the captain (including the possibility that they shared the same misconceptions as the captain about the glideslope status/FD mode or the airplane’s proximity to the airport), and/or their unwillingness to confront the captain about errors that they did perceive.

Problems associated with subordinate officers challenging a captain are well known. For example, in its study of flight crew-involved major air carrier accidents in the United States, the Safety Board found that more than 80 percent of the accidents studied occurred when the captain was the flying pilot and the first officer was the nonflying pilot (responsible for monitoring). Only 20 percent of the accidents occurred when the first officer was flying and the captain was monitoring. This finding is consistent with testimony at the Safety Board’s public hearing, indicating that CFIT accidents are more likely to occur (on a worldwide basis) when the captain is the flying pilot.

The National Transportation Safety Board determines that the probable cause of this accident was the captain’s failure to adequately brief and execute the nonprecision approach and the first officer’s and flight engineer’s failure to effectively monitor and cross-check the captain’s execution of the approach. Contributing to these failures were the captain’s fatigue and Korean Air’s inadequate flight crew training.