When I first started flying airplanes requiring two seats up front, the prevailing culture was the captain ruled the roost and the copilot was little more than a switch thrower and bag carrier. Under this old school of thought, the captain is in charge and nobody dares to question the captain's judgement. To do so would risk dismissal from the company. Given this kind of power, captains could easily become lazy. A captain who lost the physical or mental capability to fly the airplane or lead the crew would not be challenged. This is a recipe for the crashes we once thought unavoidable but now know better.

All that changed in the United States in the 1980's and our aviation culture now promotes Crew Resource Management. Accident rates have plummeted and most of the world has followed our lead. Most, but not all.

A study of accidents suffered by Korean Air and Asiana Airlines can reveal what a difference this mindset can make. They have made great strides in improving their safety records since the horrible years before 2001. They still, however, suffer too many pilot error induced crashes.

I have summarized the worst of the mishaps in hopes of illustrating why a self-critical attitude is vitally important in pilots, especially in captains and chief pilots who have less oversight than those they supervise.

I feel certain both of South Korea's international airlines have made improvements in their crew training and cockpit performance. But they have further to go. I dive into each of the following mishaps only because they serve as reinforcement to the need to emphasize pilot instrument skills, crew resource management, and situational awareness. 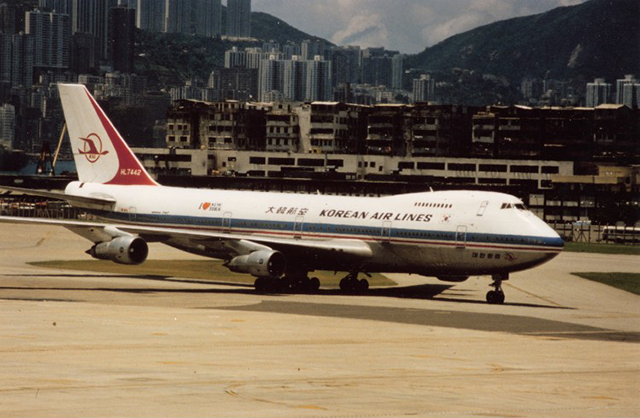 HL 7442, the aircraft that saw its demise as Korean Air Lines Flight 007, may best tell the story of Korean Air Lines (later rebranded Korean Air) and Asiana Airlines. Both companies have a history of mysterious crashes that somehow could all have been prevented by changing the mindset of the front two occupants.

2 Aug 1976 — Korean Air Lines 642. The airplane drifted right after takeoff instead of turning left as required by the Standard Instrument Departure. There was no indication of a mechanical malfunction, it appears the crew was not situationally aware of the terrain.

20 Apr 1978 — Korean Air Lines 902. The aircraft diverted from its planned course on a flight from Paris to Anchorage and strayed over the Soviet Union. After being fired upon by an interceptor aircraft, the crew made a forced landing at night on the surface of a frozen lake. Two of the 97 passengers were killed by the hostile fire. Yes, the crash was caused by a Soviet missile. But they would never had been intercepted had they managed to navigate the aircraft properly.

19 Nov 1980 — Korean Air Lines 015. The pilots ducked under the glide path on approach; the aircraft hit an embankment just short of the runway. Fourteen were killed in the fire that resulted.

01 Sep 1983 — Korean Air Lines 007. This was another case of poor navigation resulting in an intercept, this time nobody survived. The aircraft was shot down by a Russian fighter pilot eager for a kill; true. But it would never have happened had the pilots followed sound navigation procedures.

23 Dec 1983 — Korean Air Lines 084. The pilot got lost while taxiing in the fog and elected to takeoff, crashing into another airplane. He was uncertain of his position but elected to go anyway.

27 July 1989 — Korean Air 803. The crew attempted the approach in thick fog while the airport navigational equipment for an instrument landing on the intended runway was not working, the weather was below minimums, and prior aircraft had diverted. Seventy-nine people died as a result.

25 Nov 1989 — Korean Air 221. The left engine ingested ice from the wing and lost power, the crew lost directional control during the attempt to abort. A self-critiquing statement that. They attempted a takeoff with ice on the wing. Add to that: the conditions either precluded a safe abort or the crew mishandled the abort.

13 Jun 1991 — Korean Air 852. A gear up landing resulting in the total loss of the aircraft. The gear handle was never selected down.

26 Jul 1993 — Asiana Airlines 733. The pilot flew below the MDA into a mountain, following two previous attempts to land. The copilot was little more than a witness to the mishap.

10 Aug 1994 — Korean Air 2033. A fight between pilots resulted in a long landing and runway excursion. They could have landed safely or gone around safely but they elected to do neither.

06 Aug 1997 — Korean Air 801. The captain flew an out of service glide slope into a mountain, he and the crew were not situationally aware, the crew ignored stabilized approach criteria, and the crew failed to be assertive enough when calling for the go around.

15 Apr 1999 — Korean Air 6316. The captain misunderstood an altitude clearance to be in feet and not meters and put the aircraft into a steep dive the first officer was unable to recover. All three crew members were killed, as were five people on the ground.

22 Dec 1999 — Korean Air 8509. The captain followed a malfunctioning attitude indicator right into the ground. He and the copilot ignored the warnings. The captain fostered an atmosphere where the crew feared his displeasure, the first officer chose to die rather than to speak up.

Since 2001, both of Korea's international airlines have done better, though they still have more than their share of pilot-error-induced mishaps.

6 Jan 2007 — Korean Air 769. KA 769 landed on a taxiway in Akita, Japan, instead of runway 10, airport's only runway. The taxiway was empty so nobody was hurt and the aircraft was undamaged. The crew mistakenly thought the non-precision VOR approach ended at the runway threshold, the captain identified the taxiway to be the runway on his HUD, the first officer agreed.

6 July 2013 — Asiana Airlines 214. The captain allowed the aircraft to fly significantly below glide path on a visual approach in very good weather but without an operable glide slope. The captain was new to the airplane but senior to the instructor in the right seat, who kept quiet even when the airplane was twenty knots below speed at 200 feet. The aircraft impacted well short into a sea wall.