So what is the difference between area navigation (RNAV) and required navigation performance (RNP)? Well that depends...

RNAV airspace generally mandates a certain level of equipment and assumes you have a 95% chance of keeping to a stated level of navigation accuracy. RNP is a part of Performance Based Navigation (PBN) which adds to the same RNAV accuracy standards a level of system monitoring and alerting. RNAV 1 and RNP 1 both say you have a 0.95 probability of staying within 1 nm of course. RNP will let you know when the probability of you staying within 2 nm of that position goes below 0.99999.

If you would like this is a classroom format: Refresher / RNAV vs. RNP.

Area Navigation (RNAV). A method of navigation which permits aircraft operation on any desired flight path within the coverage of station-referenced navigation aids or within the limits of the capability of self-contained aids, or a combination of these. For the purposes of this AC, the specified RNAV accuracy must be met 95% of the flight time.

RNAV systems evolved in a manner similar to conventional ground-based routes and procedures. A specific RNAV system was identified and its performance was evaluated through a combination of analysis and flight testing. For domestic operations, the initial systems used very high frequency omnidirectional radio range (VOR) and distance measuring equipment (DME) for estimating their position; for oceanic operations, inertial navigation systems (INS) were employed. These "new" systems were developed, evaluated and certified. Airspace and obstacle clearance criteria were developed based on the performance of available equipment; and specifications for requirements were based on available capabilities. In some cases, it was necessary to identify the individual models of equipment that could be operated within the airspace concerned. Such prescriptive requirements resulted in delays to the introduction of new RNAV system capabilities and higher costs for maintaining appropriate certification.

In the old days we would navigate IFR from navaid to navaid and when we had to, we would fly fix-to-fix by mentally visualizing the airspace and estimating a course to fly. How?

Then various boxes appeared that did this better than we could and "area navigation" was born. It is simply a method of navigation that allows us to fly along any desired flight path. Inertial navigation systems allowed us to do this beyond the range of navigation aids and GNSS / GPS give us access to the best navigation aid of all just about anywhere in the world.

Under PBN, generic navigation requirements are defined based on operational requirements. Operators then evaluate options in respect of available technology and navigation services, which could allow the requirements to be met. An operator thereby has the opportunity to select a more cost-effective option, rather than a solution being imposed as part of the operational requirements. Technology can evolve over time without requiring the operation itself to be reviewed, as long as the expected performance is provided by the RNAV system. As part of the future work of ICAO, it is anticipated that other means for meeting the requirements of the navigation specifications will be evaluated and may be included in the applicable navigation specifications, as appropriate.

Performance based navigation incorporates RNAV and adds the ability to continuously monitor the accuracy and utility of the system, alerting the pilot when the system isn't as good as it is supposed to be.

Not too long ago the terms RNP and RNAV were used interchangeably. The Performance Based Navigation (PBN) concept changed all that. In theory, RNP is a subset of RNAV. In actual practice, there is an exception given for RNP-10, which is actually another form of RNAV. (More on that below.)

U.S. RNAV operations are based upon the use of RNAV equipment that automatically determines aircraft position in the horizontal plane using inputs from the following types of positioning sensors (no specific priority).

(1) Global Navigation Satellite System (GNSS) in accordance with TSO-C145a, TSO- C146a, and TSO-C129/C129a. Positioning data from other types of navigation sensors may be integrated with the GNSS data provided it does not cause position errors exceeding the total system error requirements. The use of GPS equipment approved to TSO-C129() is limited to those which include the minimum system functions specified in Appendix 3. As a minimum, integrity should be provided by ABAS. In addition, GPS stand-alone equipment should include the following additional functions:

For procedures requiring GPS and/or aircraft approvals requiring GPS, if the navigation system does not automatically alert the flight crew of a loss of GPS, the operator must develop procedures to verify correct GPS operation.

(2) DME/DME RNAV equipment complying with the criteria in appendix 1. Based on current DME availability evaluations, coverage is not sufficient to support DME/DME RNAV operations without additional IRU augmentation or using GPS.

(3) DME/DME/IRU RNAV equipment complying with the criteria in appendix 2.

True RNP, that using Performance Based Navigation, does not specify equipment but may require more than just navigation capability:

PBN offers a number of advantages over the sensor-specific method of developing airspace and obstacle clearance criteria, i.e.:

Within an airspace concept, PBN requirements will be affected by the communication, surveillance and ATM environments, the navaid infrastructure, and the functional and operational capabilities needed to meet the ATM application. PBN performance requirements also depend on what reversionary, non-RNAV means of navigation are available and what degree of redundancy is required to ensure adequate continuity of functions.

The pilot is not required to monitor ground-based NAVAIDs used in position updating unless specified by the Airplane Flight Manual (AFM).

Total System Error (TSE) is simply a measure of how far off course the airplane can be. In RNP-1 or RNAV-1 airspace, for example, the TSE = 1. Is RNP more accurate than RNAV? No.

Looking at the figure on the top of the page, you see that both RNAV-1 and RNP-1 keep the aircraft within 1 nautical mile of centerline 95% of the flight time. The difference is that under RNP-1, the pilot is notified when the system thinks there is a greater than 0.00001 probability (.001%) that the airplane could wander outside of 2 nautical miles. 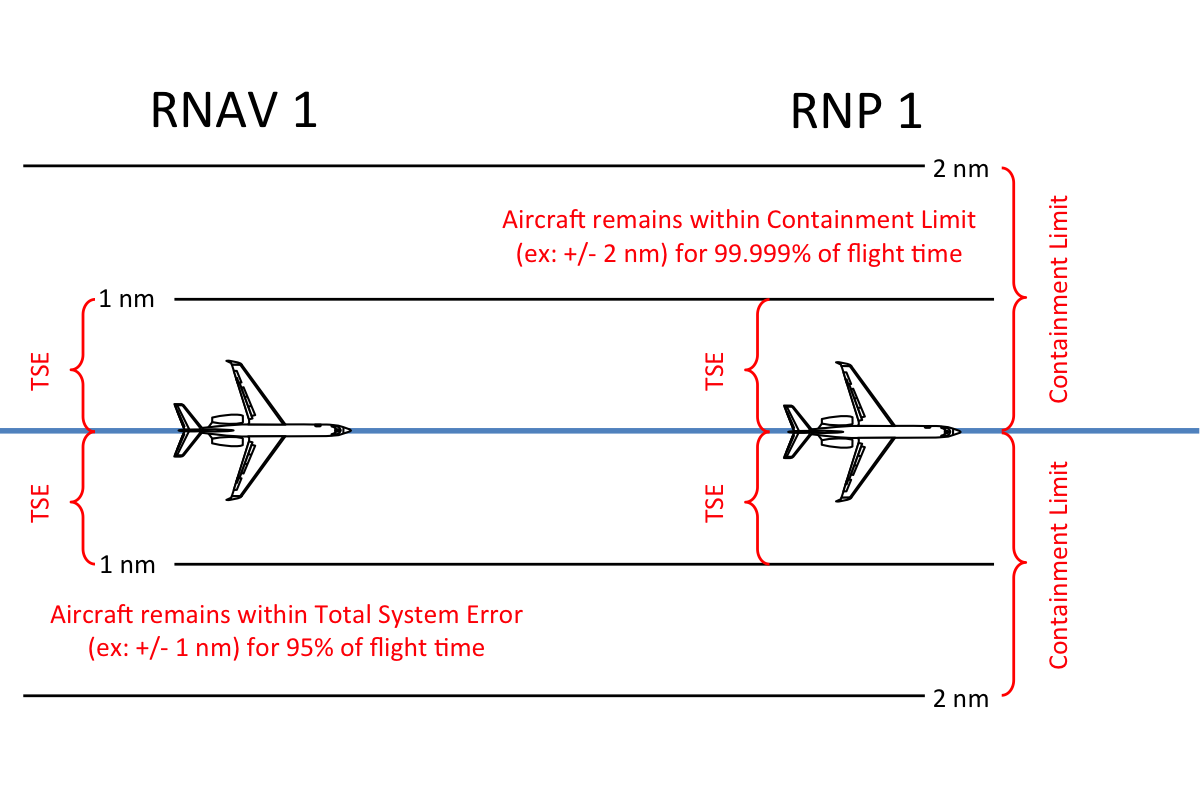 So what makes RNP different than RNAV?

Let's first look at what makes them the same:

The following applies ONLY to RNP:

The PBN concept uses the term on-board performance monitoring and alerting instead of the term containment. This is to avoid confusion between existing uses of containment in various documents by different areas of expertise. For example:

The previous ICAO expressions of "containment value" and "containment distance" have been replaced by the navigation accuracy of TSE.

All pilots are expected to maintain centerline, as depicted by onboard lateral deviation indicators and/or flight guidance during all RNP operations described in this AC unless authorized to deviate by air traffic control (ATC) or under emergency conditions. For normal operations, the cross-track (XTK) error/deviation (the difference between the RNP system computed path and the aircraft position relative to the path) should be limited to ± the RNP value. Brief deviations from this standard (e.g., overshoots or undershoots) during track changes (flyby and flyover turns), up to a maximum of one times the RNP value are allowable.

North Atlantic High Level Airspace (NAT HLA) — for now it is lateral deviation standard of 6.3 nm, used in the north Atlantic and a few other regions. It will be replaced worldwide by RNP-4 or RNP-10 by the year 2020. (The NAT HLA isn't really RNAV or RNP, but it fits better into the RNAV category.)

Precision Area Navigation (P-RNAV) — +/- 1 nm for 95% of flight time, will eventually be replaced but remains a requirement in many parts of the world.

Required Navigation Performance-10 (RNP-10) — +/- 10 nm for 95% of the flight flight; despite the name, RNP-10 is an RNAV system without performance monitoring and alert capability. The ICAO elected to retain "RNP-10" when in fact it should be "RNAV-10" because many areas of the world adopted "RNP-10" before the RNP specification was made. The affected regions complained it would be too costly to change all the manuals and charts, so the ICAO made this exception. 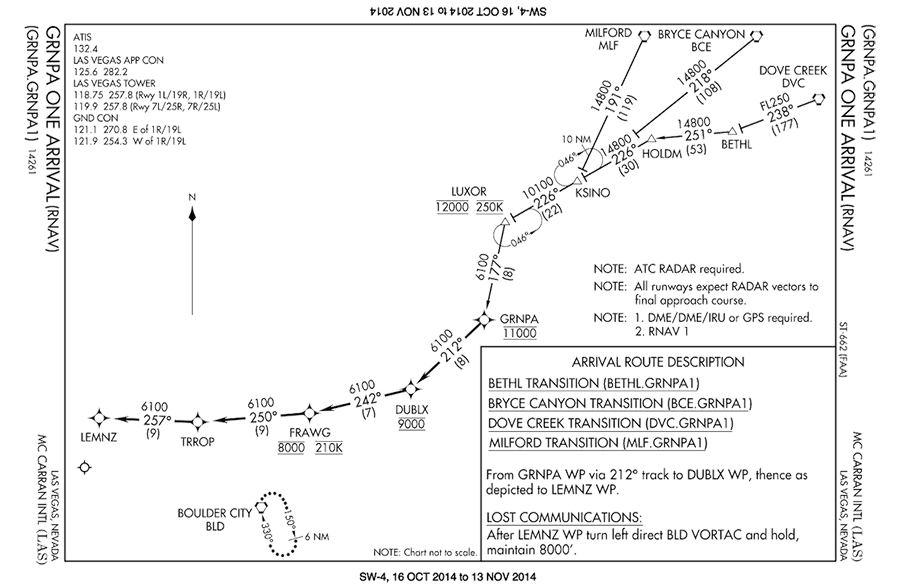 Area Navigation (RNAV). A method of navigation which permits aircraft operation on any desired flight path within the coverage of station-referenced navigation aids or within the limits of the capability of self-contained aids, or a combination of these. For the purposes of this AC, the specified RNAV accuracy must be met 95% of the flight time.

There is more to RNP than navigation accuracy, it may also require specific communications and surveillance capabilities such as CPDLC and ADS-C.

GNSS and RNAV (or) RNP

There have been questions on whether GNSS is an RNAV or RNP system. The answer is GNSS is both an RNAV and RNP system because RNP is a subset of RNAV that also includes a requirement to provide on-board navigation system accuracy performance monitoring and alerting. Therefore, an RNP system is also capable of RNAV. GNSS equipment provides accuracy performance monitoring and alerting which, by definition, makes it an RNP-capable system.

Advisory Circular 90-105A, Approval Guidance for RNP Operations and Barometric Vertical Navigation in the U.S. National Airspace System and in Oceanic and Remote Continental Airspace, 3/7/2016, U.S. Department of Transportation