Have you ever landed your airplane on a wet runway and thought, "that was just like it was dry" and then, on another day, "that might as well have been ice." Me too. For years, I've known that 1/8" is where wet becomes contaminated. But when tower says the runway is wet, I assume it is the less than 1/8" variety of wet. 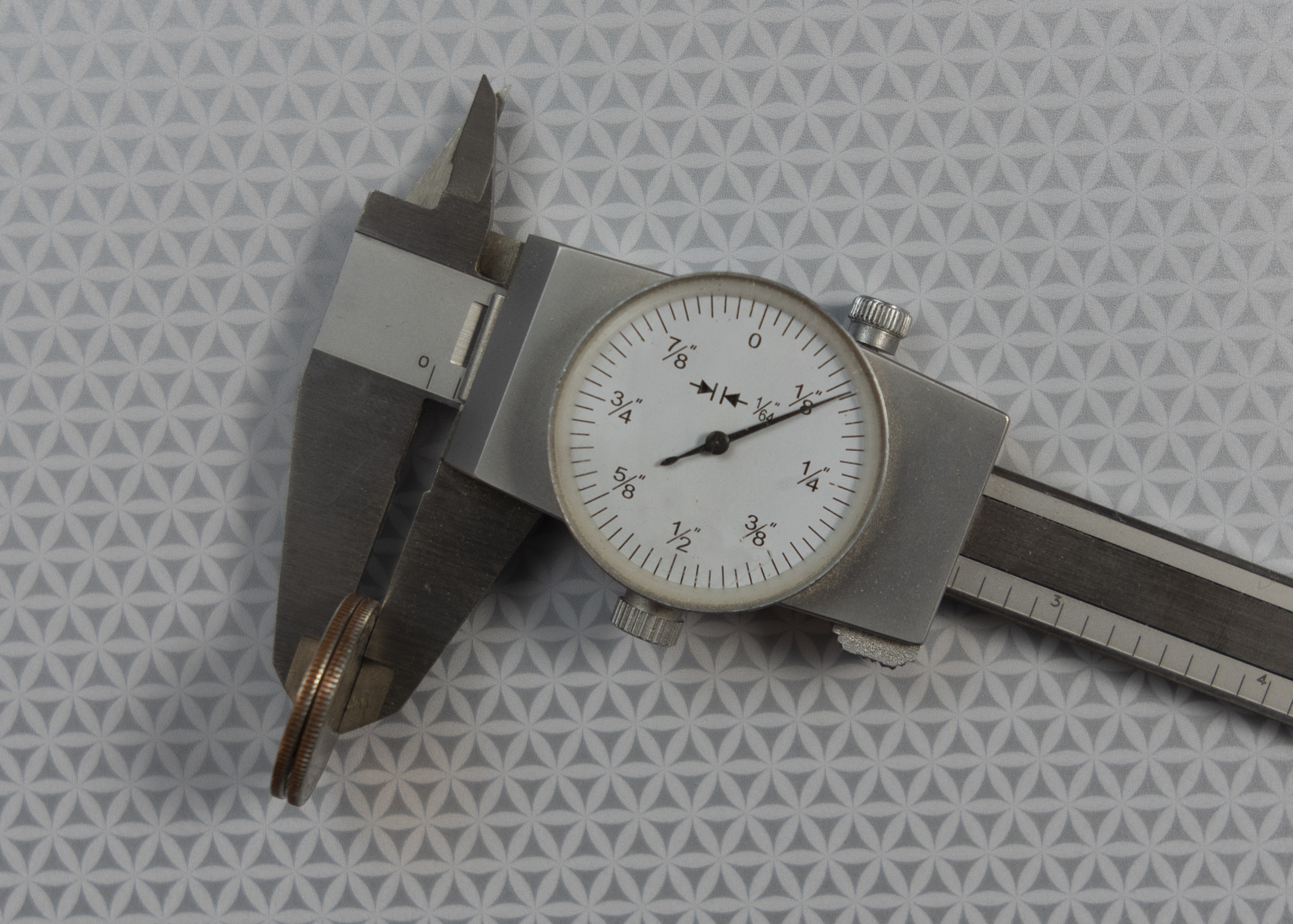 Even on short final, unless I can see swimming pools of water, I think (and hope) we are just dealing with wet. Besides, 1/8" is hardly anything at all. You could stack two quarters and that would hardly be . . . no, wait.

A recent SAFO tells us that an analysis of recent contaminated runway "incidents/accidents indicates that the braking coefficient of friction in each case was significantly lower than expected, and that 30 to 40 percent of additional stopping distance may be required if the runway transitions from wet to contaminated based on the rainfall intensity or reported water contamination (greater than 1/8-inch depth)." Maybe I should pay more attention to this.

But first, a story

"How does one person become so paranoid after just a few years of flying?" I started flying in 1979 when the Air Force handed me the keys to a Cessna T-37. Five years later I was in command of a Boeing 707 with a load of passengers flying into Anderson Air Force Base on the island of Guam. I had been there before and knew exactly what lay at the end of the runway. It was a 600 foot cliff and at the bottom of the cliff under the Pacific Ocean lay a B-52 bomber. I was once destined for a similar fate but had escaped it. (See "Know your limitations" for that story.) But this was four years later. I was much wiser. 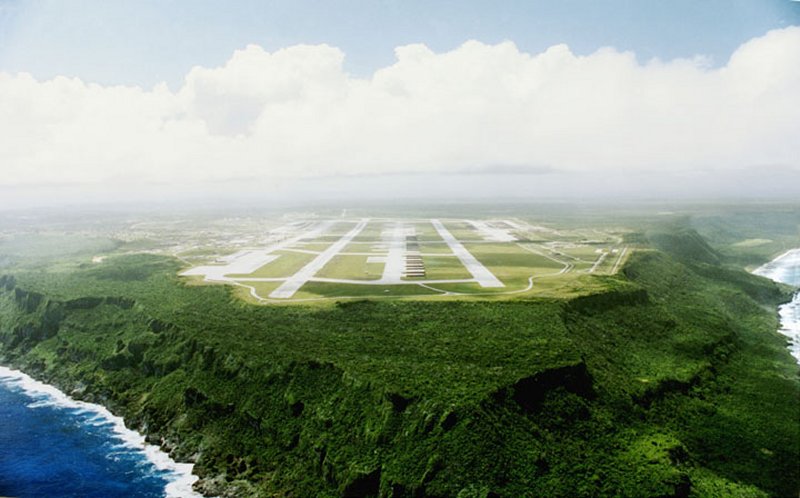 Anderson Air Force Base, Guam, circa 1984

That B-52 was on its way to Vietnam during Operation Arc Light in 1968 to drop a load of bombs. I was on a two week trip throughout Southeast Asia on a diplomatic junket for the U.S. State Department that started with a visit to Guam. The base sits on the northern tip of the island and runway 6R/24L sits at the tip of that tip.

The headwind wasn't nearly as bad as forecast and I found myself with twenty minutes to kill, not wanting to embarrass the Deputy Assistant to the Secretary of State for an arrival without the brass band and red carpet in position. So I adjusted our arrival routing for a later landing. The Anderson Air Force Base weather shop said it was raining all day and it was only going to get worse.

"Maybe we should land sooner than later," Captain Dellums said. He was the first copilot ever assigned to me and was new to our mission of flying VIPs all over the Pacific. He didn't understand the need to be on time, every time.

"No, we'll be okay," I said. "The weather shop says nothing more than moderate rain and the base says we can expect an RCR of nine." I had always found the Runway Condition Reading reassuring. It was science, after all.

The Air Force back then had three numbers for us to memorize when it came to landing performance. The experts at Base Operations would take a truck with a decelerometer down the runway before locking up the tires. The decelerometer would report an RCR of 4 for icy, 9 for wet, and 23 for dry. You only got one of those three numbers unless you were up someplace north and they had fancier equipment. Flying into Guam, we were told the runway was wet and were given a RCR of 9. Going through our charts, which gave us the full range of numbers from 0 to 23, we looked at the 9 and saw that we only needed 7,000 of the 11,200 foot runway. Easy.

It was raining all right. We popped out of the weather at about 300 feet with the runway right in front of us. With the rain I doubt we had much more than a half mile of visibility and the runway looked wet, wet, wet. The near, mid, and far ends of the runway looked to be pooled with water. I dropped the airplane onto the first 1,000 feet of the runway (as was our custom in that squadron), pulled the speed brake lever, and extended the tops of my feet to tap the brakes. There were none.

"One twenty," Dellums said. Our rule of thumb for normal braking was to halve the speed and multiply that by one hundred for a target deceleration rate. That meant if I had 120 divided by 2 times 100 equals 6,000 feet of runway in front of me, I was in good shape. I had over 9,000. But I felt nothing with the brakes.

"One hundred," he said again. My feet were to the floor and I could feel the anti-skid kick back. Thoughts of 600 foot cliffs and submerged bombers started to compete with the math formulas. Deceleration equals the change in speed divided by the time elapsed squared . . .

"Eighty," he said at last, followed by "sixty, forty, on the peg." I turned right at the last exit, about three hundred feet from the end of the runway and a few more from the cliff. The copilot busied himself with the checklist, as if this was nothing more than another landing. We got to the red carpet on time, but that carpet was soaked from the rain, as was the band and the greeting party.

"Too bad you couldn't have made it about fifteen minutes earlier," our liaison officer said after the passengers had left. "It was raining but not nearly as hard."

We had a few days off and I talked with the base operations duty officer about those RCR readings. "They make us take those with the truck but the meters aren't very good," he said. "It doesn't really matter. The rules only allow us to report 4, 9, or 23. We've never had a 4 in Guam and I can tell the difference between wet and dry without the truck."

Years later, after a crash or two, the Air Force gave up the 4, 9, or 23 business. As it turns out, it wasn't nearly as scientific as I thought. I never again trusted anyone's judgment when it comes to the difference between wet and dry.

We pilots have long wanted a definitive answer to this primal question: "How much runway will I need to stop this beast?" Most regulatory agencies require an answer derived from test data on a dry runway and we end up with tables that give us answers to the nearest foot or meter, yes it is just that precise! But what if the runway isn't dry?

The standard dry runway charts are for a totally dry runway. NOTE: For example, if the ramp is too damp to sit on due to morning dew, the runway is probably the same. The pilot should use the wet or contaminated performance data. 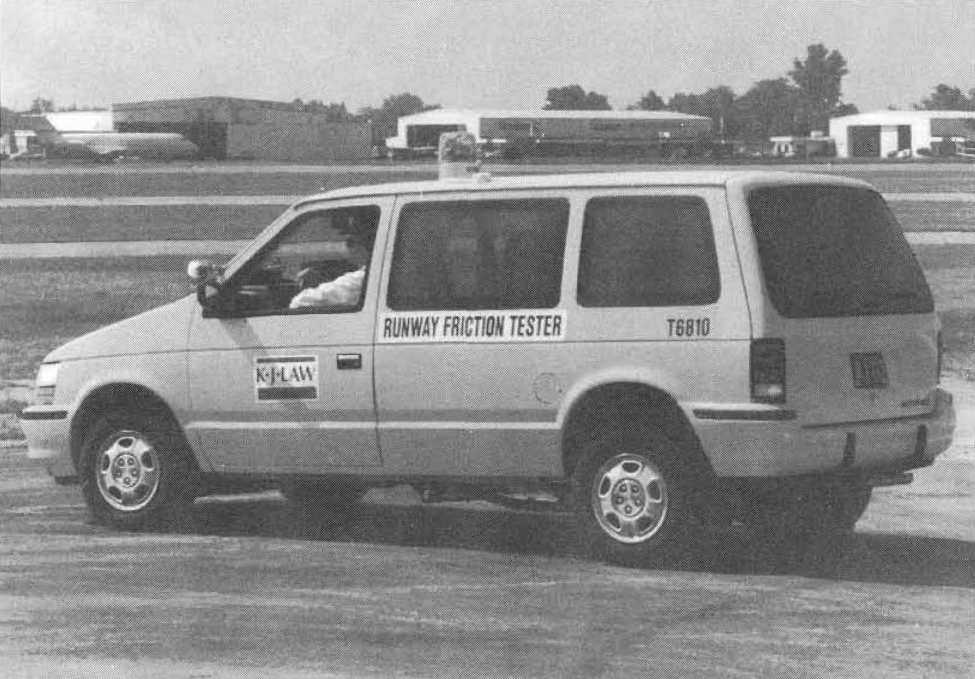 There is a requirement to report the presence of water within the central half of the width of a runway and to make an assessment of water depth, where possible. To be able to report with some accuracy on the conditions of the runway, the following terms and associated descriptions should be used:

Damp, wet, water patches, and flooded. Hardly a scientific method. The industry has dabbled with things like "Mu" and other measures, but getting a good reliable number from actual runway conditions has never been easy and I think we've given up. More about this: Runway Friction.

I write extensively about contaminated runways here: Contaminated Runways. But for the purpose of this discussion, I want to dive into "wet" versus "really wet," or just when does a wet runway become contaminated? There is an answer, but it is rarely applied correctly.

So when is a runway wet versus contaminated? The ICAO has an answer and just about everyone else has adopted the answer. The U.S. FAA has translated it so it makes a bit more sense.

Wet Runway. A runway is wet when it is neither dry nor contaminated. For purposes of condition reporting and airplane performance, a runway can be considered wet when more than 25 percent of the overall runway length and width coverage or cleared width being used is covered by any visible dampness or water that is 1/8-inch (3 mm) or less in depth.

A runway is contaminated when . . .

Contaminated Runway. For purposes of generating a runway condition code and airplane performance, a runway is considered contaminated when more than 25 percent of the overall runway length and width coverage or cleared width is covered by frost, ice, or any depth of snow, slush, or water.

Water. Water is the liquid state of water. For purposes of condition reporting and airplane performance, water is greater than 1/8-inch (3mm) in depth.

If more than a quarter of the runway has water deeper than two quarters stacked together, your runway isn't wet, its contaminated.

One-eighth of an inch seems like too little to really care about. But maybe we should care about it . . .

I think the problem is that since no regulatory agency requires wet runway takeoff and landing performance test data and are okay with using a 15% factor, we operators assume that 15% is a good, conservative number and press on. Our confidence is reinforced because that 15% usually IS a good conservative factor. But going from a thin coating of water to an eighth of an inch changes everything. After a few too many accidents, the U.S. FAA has given notice. There is really nothing new in this Safety Alert For Operators. What it does is connect the dots between the 1/8th inch factor we've always had, the Runway Condition Assessment Matrix (RCAM) we gained in 2016, and say "Hey, pay attention! We really mean it!" You should pay attention. 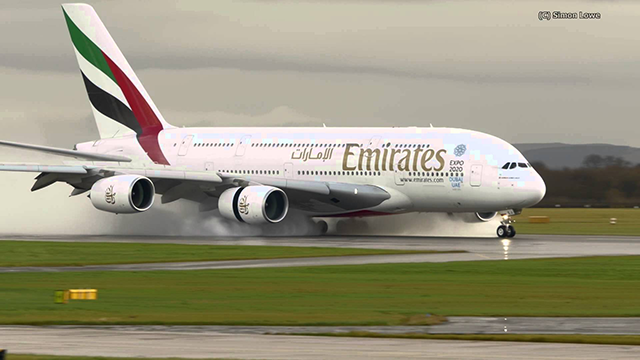 A380 during a wet (or contaminated?) runway

You can learn more about RCAMs here: Runway Condition Assessment Matrix (RCAM). The important take away is that an RCAM of 6 is dry, 5 is wet (less than 1/8" water), and contaminated (more than 1/8") water is 2. Yes, from a 5 all the way down to a 2. But what does that mean for takeoff and landing performance?

I encourage you to try this with your airplane but I'll include an example using my trusty Gulfstream G450 as an example. The aircraft's PlanePerformance application provides a graphical look at the runway needed. I hope this answers the "does it matter?" question when comparing "wet" to an "RCAM = 2" debate. 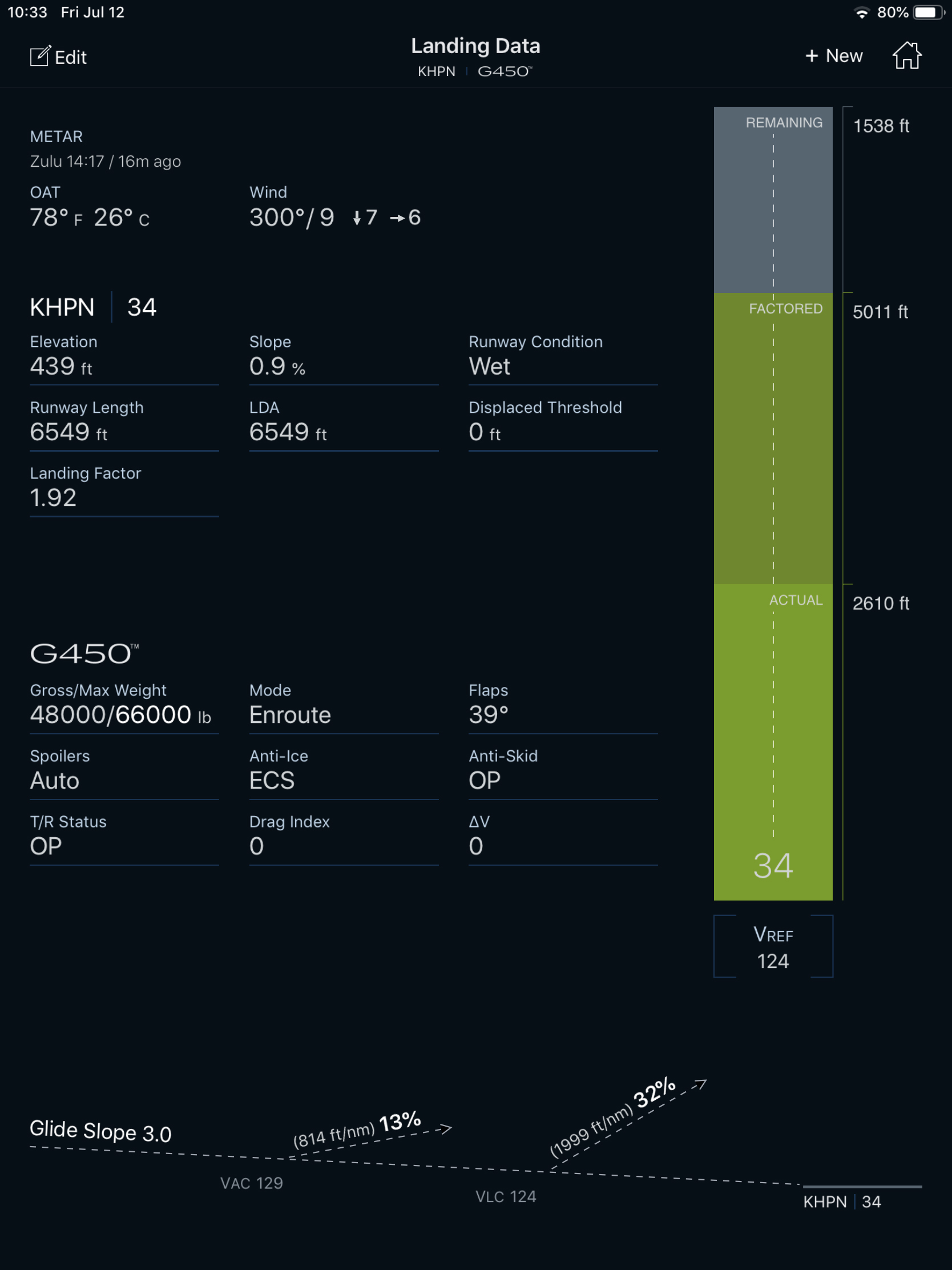 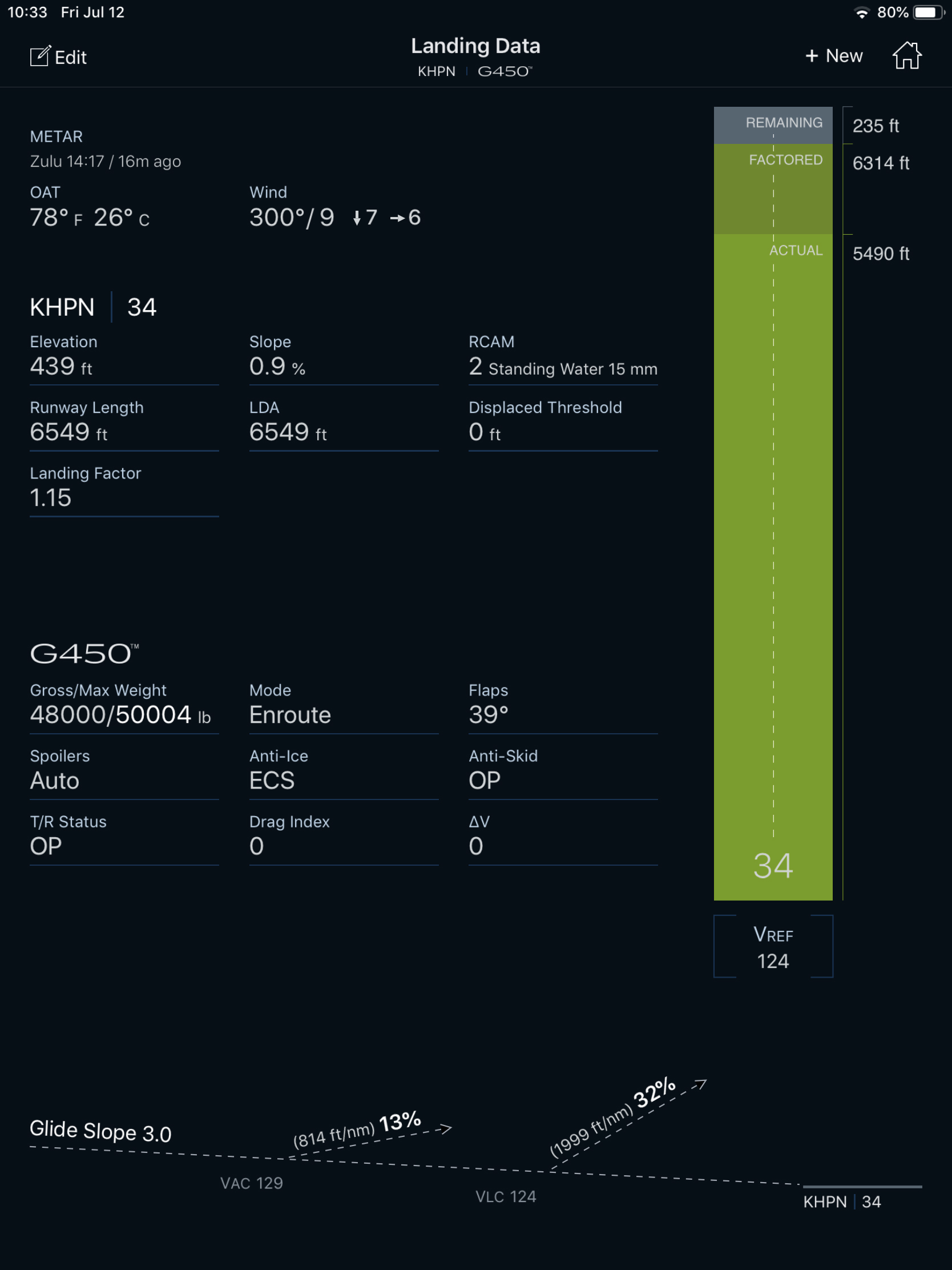