In twenty years in uniform I was strapped into an altitude chamber six times, but it was the first time that was the most meaningful. Sharing the chamber with classmates I would later get to know better, I learned that many of us react to hypoxia the same way we do with too much alcohol. Some get belligerent, some get dopey, and others, like me, just get sleepy. I had almost no symptoms and was cautioned, "You need to be be careful, lieutenant, you will never know if your oxygen mask gets disconnected." 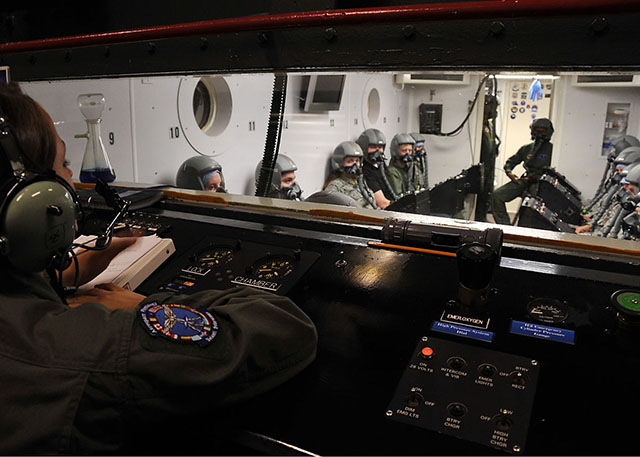 The truth is far worse, however. It turns out none of us can really detect hypoxia in ourselves. It helps to have an airplane designed to take care of us with multiple layers of warnings. In the GV series, for example, our pressurization system sets itself for the departure and destination elevations, the cruise altitude, and just about every other variable. If that fails and we lose pressurization above 40,000 feet, it performs an emergency descent for us. Nice. More about this: G450 Emergency Descent.

Not all aircraft are so vigilant, as the cases of Helios 522 and Learjet N47BA point out.

5 — Notable mishaps where slow onset hypoxia may have been causal

Hypoxia is a state of oxygen deficiency in the blood, tissues, and cells sufficient to cause an impairment of body functions. Anything that impedes the arrival or utilization of oxygen to the cell places the body in a hypoxic state. All cells require oxygen to function. The central nervous system (made up of the brain and spinal cord) demands a great deal of oxygen (approximately 20 percent of all oxygen that you inhale feeds the brain). If the oxygen supply to the body is reduced, the brain will be one of the first organs to be affected, with the higher reasoning portions of the brain showing degraded function first. This means that judgment and cognitive skills diminish from the very start. There are many conditions that can interrupt the normal flow of oxygen to the cells.

The cause of this type of hypoxia is an insufficient partial pressure of oxygen in the inhaled air resulting from reduced oxygen pressure in the atmosphere at altitude. Altitude hypoxia poses the greatest potential physiological hazard to a flight crew member when at altitude. Supplemental oxygen will combat hypoxic hypoxia within seconds. Check your oxygen systems periodically to ensure an adequate supply of oxygen and that the system is functioning properly. Perform this check frequently with increasing altitude. If supplemental oxygen is not available, initiate an emergency descent to an altitude below 10,000 ft MSL.

WARNING: If hypoxia is suspected, immediately don oxygen mask and breathe 100 percent oxygen slowly. Descend to a safe altitude. If supplemental oxygen is not available, initiate an emergency descent to an altitude below 10,000 ft MSL. If symptoms persist, land as soon as possible.

This type of hypoxia is defined as a reduction in the oxygen-carrying capacity of the blood. Hypemic hypoxia is caused by a reduction in circulating red blood cells (anemia) or contamination of blood with gases other than oxygen.

This is a less common form of hypoxia. It is due to inadequate blood flow to the tissues. Causes include heart failure, shock, prolonged positive pressure breathing, and excessive G-forces.

WARNING: A common misconception among pilots is that it is easy to recognize the symptoms of hypoxia and to take corrective action before becoming seriously impaired. While this concept may be appealing in theory, it is both misleading and dangerous for crewmembers.

I was once flying a T-37 on a two-hour flight at FL250, unpressurized. The other pilot said something out of character and it seemed to me he wasn't himself. I asked him about that and the answer I got back was nonsensical. I looked over and noticed his mask had become disconnected. I pointed to that, he reconnected the oxygen hose, and he became coherent almost instantly. The problem in a non-oxygen mask environment, of course, is if the aircraft gradually loses pressurization we are all subject at the same time. But some of us are more prone to the effects than others. Smokers, for example, have a greater tolerance while runners have a lesser tolerance. The lesson here is to keep an eye on each other and when in doubt, check the cabin altitude.

Although a deterioration in night vision occurs at a cabin pressure altitude as low as 5,000 feet, other significant effects of altitude hypoxia usually do not occur in the normal healthy pilot below 12,000 feet. From 12,000 to 15,000 feet of altitude, judgment, memory, alertness, coordination and ability to make calculations are impaired, and headache, drowsiness, dizziness and either a sense of well-being (euphoria) or belligerence occur. The effects appear following increasingly shorter periods of exposure to increasing altitude. In fact, pilot performance can seriously deteriorate within 15 minutes at 15,000 feet.

At cabin pressure altitudes above 15,000 feet, the periphery of the visual field grays out to a point where only central vision remains (tunnel vision). A blue coloration (cyanosis) of the fingernails and lips develops. The ability to take corrective and protective action is lost in 20 to 30 minutes at 18,000 feet and 5 to 12 minutes at 20,000 feet, followed soon thereafter by unconsciousness. 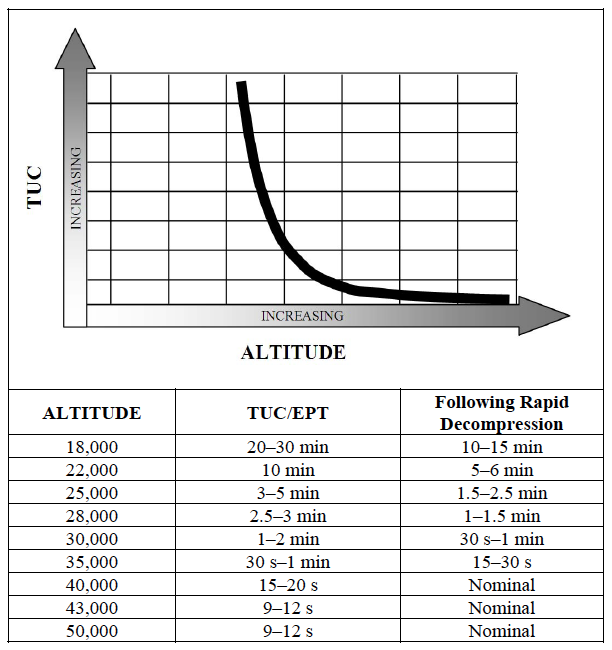 Times of Useful Consciousness versus Altitude, from AC 61-107B, Figure 2-3.

Rapid loss of aircraft pressurization dramatically reduces TUC. As a general rule, it can be assumed that the TUC following decompression to altitudes between 25,000 ft and 43,000 ft will be reduced by 50 percent. Above 43,000 ft, the TUC is reduced to the time it takes for the blood to circulate from the lung to the brain, plus any reserve oxygen stored in the brain. This is approximately 9–12 s from the start of a rapid decompression to the loss of functional capability. In some cases, hypoxia exposure can lead to a shock type reaction that could further reduce the TUC.

These times were based on Air Force pilots in their twenties, sitting in altitude chambers, fully prepared for the decompression. If you are not as fit as they were, not as young, and not as prepared, your times are going to be worse.

More about this: Rapid Depressurization.

Notable mishaps where slow onset hypoxia may have been causal